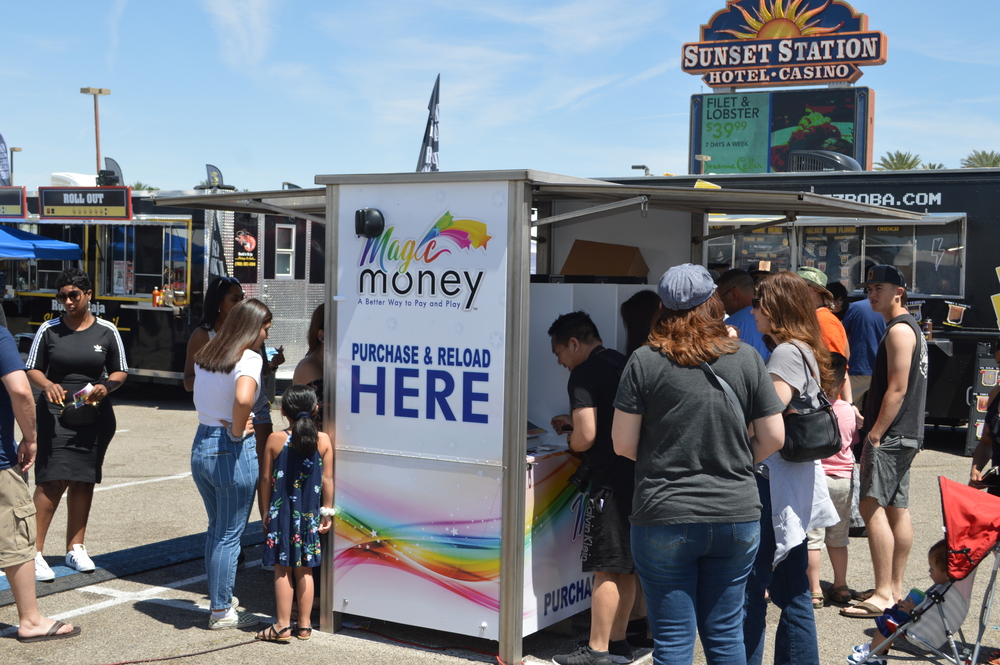 For years ticketing on carnival midways has been undergoing a transition to digital. However, system limitations, long set up times and the large upfront expenses associated with going digital prevented many carnivals from joining the digital revolution.

Magic Money addressed many of these concerns by providing an easy to set up, easy to learn and use system with low upfront costs bringing digital within reach for carnivals of all sizes. This model is enabling carnivals from large to small to bring the advantages of digital ticketing to their Midway's. In the last three months, three new shows including Davis Amusements Cascadia, Paradise Amusements, and Midway West joined Talley Amusements and Crabtree Amusements in offering Magic Money on their Midways.

“We had been talking with different companies for years, and there's a lot to like and dislike with each system,” said Celeste Davis Owner/Manager Davis Amusements Cascadia. “What we liked the most about Magic Money was their cellphone network as opposed to wireless networks. Speaking with fairs and other carnival companies, their systems will go down and you continue scanning and there's no deducting of payment. Here the system keeps rolling. They use different carriers so if there's a problem with one carrier you can immediately switch to another. We have yet to experience any significant system issues”

Time is money, especially when the overhead is as tight as it can be for smaller carnival companies. “We needed a system with little to no downtime or transaction problems,” added Davis.

“We looked at a lot of systems,” said Sherry McKay, owner of Paradise Amusements . “It was just a matter of time, the world has changed. Everybody has a debit card. The customer is a lot happier not having to buy the physical ticket. It's easier for them to go to the kiosk and refill, and now if they have the app, they can refill on their phone. Magic Money has enabled us to reduce ticket sellers by more than 50% which has been a welcome savings for our show”.

A System for Any Size Carnival

The advance of technology may seem to be inevitable, but heretofore RFID vendors mainly focused on the upper echelon of carnival companies as well as some big state fairs. This year, Magic Money signed up several small-to-midsize carnival companies (roughly 25 rides or less), signaling that more local and regional fairs, parking-lot still-dates and community fundraisers will soon offer the convenience and efficiency of a cashless midway.

“I feel like the system is bringing us to the 21st century,” said Michelle Jensen, Vice President, Midway West. “The technology is finally here for a company like ours to be a part of the cashless system.”

Mobility was also a key consideration to smaller carnival companies adapting a cashless system. Midway West's route consists of smaller events every few days. According to Jensen, her carnival company jumps every week, which was a concern when she went cashless in early summer. “We thought it would take a couple of weeks before everyone was used to it, like it would be with anything so new to adapt. But we were right on board.”

For many providers, one of the most appealing aspects of the Magic Money system was the time savings, reducing the number crunching from “four or more hours to just a couple of hours,” said Jensen. “Every fair manager we work with loves the system. There's no weighing of tickets, the data is all there.”

Some people prefer a prudent approach when it comes to change and others put caution to the wind. Sherry McKay, owner of Paradise Amusements was firmly in the latter category when her carnival company decided to go cashless. She decided to pick one of the busiest days of the fair season: July 4th.

“We knew it was going to be crazy,” said McKay. “But if we wanted to learn the system, we wanted to know what could go wrong, so we are ready to go. It was a little bit hectic at times.”

The trial by fire of a July 4th launch however may not have been as risky as it may sound. Cashless systems in one form or another have been available to the fair industry for more than a decade and McKay has been researching the technology for at least three years. When she finally made the decision, she went with Magic Money, one of the newest Radio-frequency identification (RFID) companies now specializing in the fair industry. The company's system is known for its ease-of-use, customer service, and decentralized, modular operational system.  During the initial launch, Magic Money personnel were onsite to assist with hardware setup, system training, and to help make the transition as seamless as possible.

Turned out there were very few issues with the transition to a cashless midway – any problems McKay described as mere hiccups. Weeks later, the Magic Money cashless system was nearly hiccup free and already improving efficiency and saving costs.  Another added benefit was the elimination of many three ticket seller positions.

In real time, one adjustment she made was moving a fence and a ticket box that seemed to be causing some access issues to the ride. Other data will be used either to make layout changes at the next fair or the next year at the same location.

“The benefits are the same no matter what size fair or midway,” said Doug Clarke, Director of Sales for Magic Money. “You reduce labor costs, reduce theft and loss of money, there's more transparency. We have been surprised at the growth in interest and adoption from the smaller carnivals. The system is really affordable. We've learned a lot about these customers, they are very focused on the training, they've shopped the other systems and finally have found one that makes sense for their needs. They are great customers.”


Advantages for the Small and Midsize Carnival

The advantages of high-tech transactions on the midway were long apparent to Jensen, as was the consumer preference for cashless purchases throughout the culture. But the systems for ride companies just weren't suitable for her sized carnival company. “I spoke to people with the other systems, there were problems with the Wi-Fi or when the systems were updated. They were also very expensive. They are really made for the companies that play the larger fairs. But it's the wave of the future, and when I saw the Magic Money system, I said then why not start now?”

Small-to-midsize carnival companies have some of the most rigorous routes in the fair industry. Not only do they play the gamut of fair grounds, from urban to rural, from constricted parking lots of shopping centers to open fields located deep in small town America, the events typically last only a few days, usually just a single weekend. In order for these midway providers to adapt a cashless system, it must versatile, mobile, and user-friendly.

“These companies are in new locations every week,” said Clarke. “We've made the system easy to set up. It's so mobile and agile that they can move the system from spot to spot.”

Another hallmark of the Magic Money System is the ability to rapidly improve and develop the system. Some of the newer bells and whistles for Magic Money in 2019 are a more streamlined settlement and payment system, a more user-friendly login and dashboard, and fully automated ticket selling including fairgoer friendly apps, which enable fairgoers to bypass kiosks and reload cards on their smartphones.

The decentralized design has a built-in failsafe; a malfunction in any component is an isolated incident, not a system-wide disruption. “Because the system isn't hardwired or connected to one big central server there is really no way for the entire system to ever go down,” said Clarke. “If a single scanner has an issue you just troubleshoot that one scanner but the other 40-100 scanners keep working. If a kiosk gets unplugged you just need to plug that kiosk back in but the others will keep working.  So because the system is modular and not hardwired there is no way for the entire system to ever crash or go down.”

“If one thing goes down, you do not lose the entire midway, which is what happens with other systems,” said McKay. “You can access the entire system, and find what is happening in real time on my phone.”

Manager time is also saved by the streamlined processing. “When we book an independent operator, we can get an exact picture of their sales, and that's good for both of us,” said McKay. “It does eliminate late nights of weighing tickets and settling up, because you have the exact picture of the data.”

The information and ease of use of the Magic Money System is important for McKay not just for business reasons, but for personal reasons. She can maintain a better work/life balance with Magic Money. She's raising two teenagers and cannot be physically present on the midway every hour of every event. “You can look at the virtual midway remotely. I can see if it's a slow start, or if a kiosk is jammed, how many wristbands and cards are being sold. It allows me more control even if I am not on the Fairgrounds.”

While Midway West was adapting to their Magic Money system the company's H-2B workers were beginning to arrive. The transition to a cashless system remained seamless even with this influx of new labor. “They took to it right way,” said Jensen. “The Magic Money people spoke Spanish, and they worked with each worker training them on the system, how they scan the card with every ride. The training went quickly and the workers learned very quickly. We were able to get rid of the ticket sellers, so they assist with the people on our midway.”

“The key to this business of a cashless midway is that it must really simple to understand,” said Davis. “We work with independent operators, and they have had no trouble with it, and it's more accurate, which they like. It eliminates employee graft, which can be a problem for some of the independents.”

Davis praised the customer support she received during the transition. Magic Money personnel were onsite for the implementation. “The Magic Money team was with us onsite, helping us and each of the independents, the food people, the game people, all the rides. The training was fantastic. Then when we had a problem after we had a system, the tech support was available by phone, no waiting. And, they are available during the fair hours.”

“We are excited to help more carnivals make the digital transition quickly and easily,” adds Clarke. 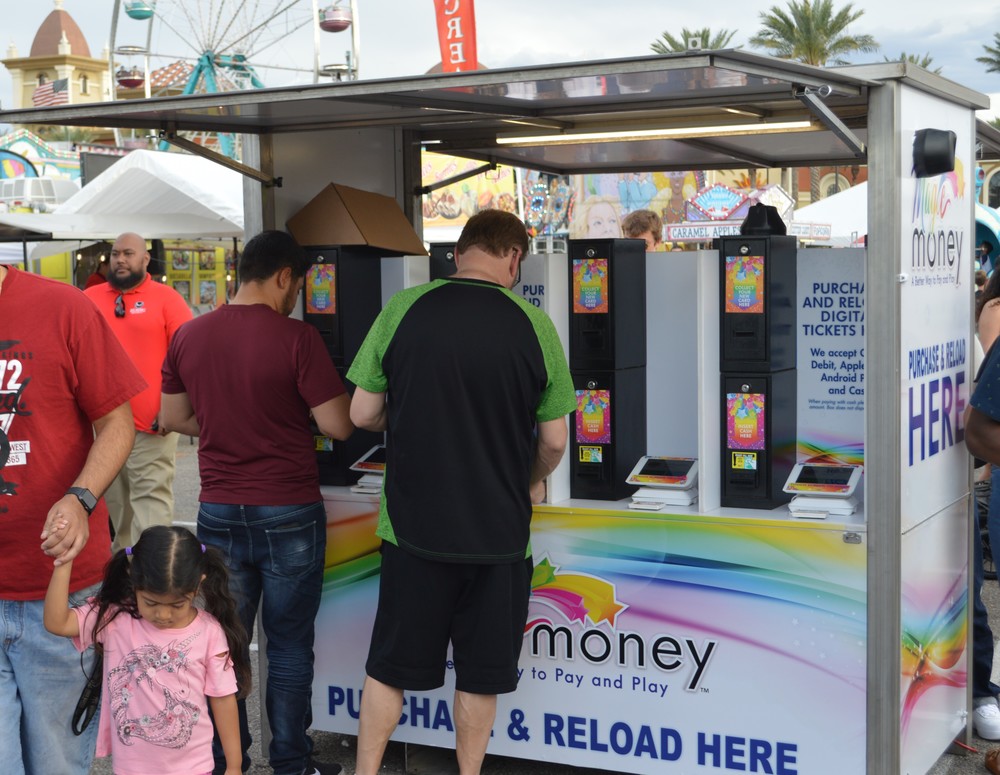 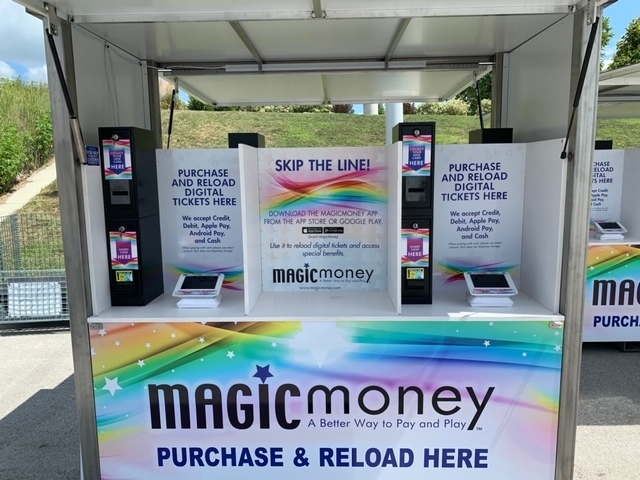 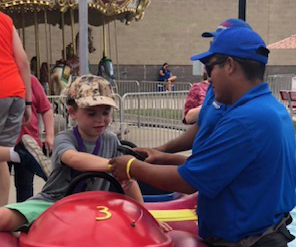 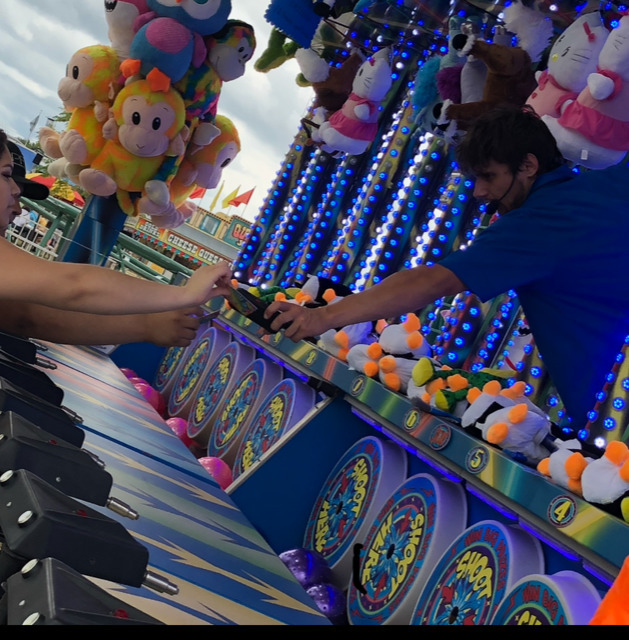