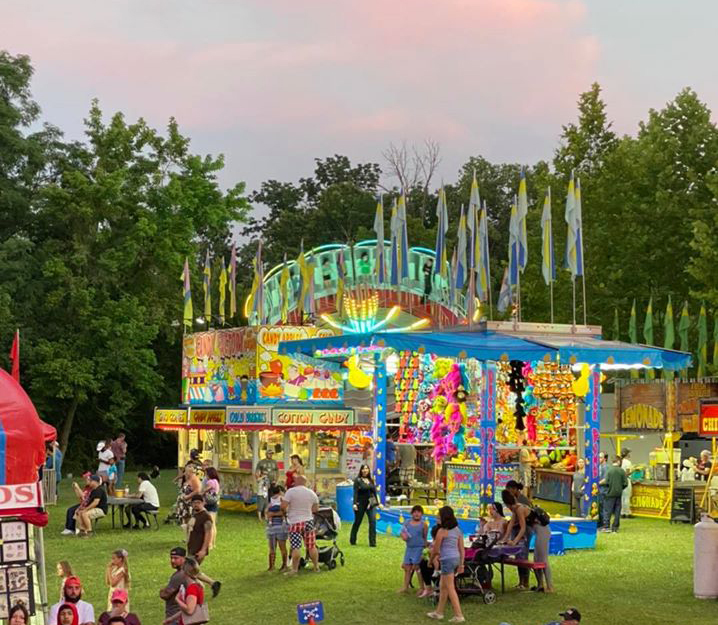 Tons of Fun Shows opens the FUN ZONE at its property in Douglasville, PA
The show set up a select number of rides, games, and food on its property outside of its winter quarters and is open through the summer, Thursday through Sunday.

For Benjamin Pfeffer, General Manager of Tons of Fun Shows, reopening his show was not a choice, but a necessity. “I either don't open and lose my business or I reopen and maybe lose my business, that's what it came down to,” says Pfeffer. Beginning June 26th, what started out as a joke became a reality when Pfeffer and his family set up about 8 rides, 4 food stands, and 4 games in the front yard of their 15 acre property in Douglassville, PA. With only a few of his regular events still scheduled in August, Pfeffer and his staff are settling into a new normal: running more of an amusement park-like operation rather than a traveling carnival.

In March, when the COVID-19 pandemic began affecting the amusement industry, Pfeffer and his staff were working hard on ride refurbishment projects in his winter quarters. The Tons of Fun fire trucks ride got a makeover and then they moved on to the Round Up ride: changing the lighting package, the sweeps, and the outer coating on the cages. “The projects turned out better than we could've ever hoped for,” says Pfeffer. Because they don't normally hit the road until the first week of May, Tons of Fun staff members were originally naive about the effects of COVID-19 on their business; “we held out hope and prepped to open, but then events started canceling.”

Like many other shows, Pfeffer got creative and decided to set up a fair food drive thru with his fry stand and funnel cake stand throughout the month of May. Towards the end of May and the beginning of June, Pfeffer's county started moving out of the stay at home order and restaurants reopened for takeout which slowed the fair food drive-thru business. “I think the luster wore off and it wasn't as popular once there were more food options. Then, it wasn't worth it to keep doing it anymore,” says Pfeffer. There's a nice, grassy area located on the front part of the property which Pfeffer and his family have always wanted to use for a community event. After checking with the city and confirming that it's zoned as an amusement/commercial area, the idea for the Fun Zone at Midway Meadows was born.

The Fun Zone opened for the first time the weekend of June 26th with about 6 rides, 4 food stands, and 4 games. Pfeffer and his family hesitantly opened, unsure of how the public would respond, but with a comprehensive safety plan in place. “We started with the rides closest to the front of the barn where they are stored, and aimed for the family and kids crowd. We had a great response and our neighbors were extremely supportive,” says Pfeffer. After a successful opening weekend, Pfeffer and his staff set their sights on producing a spectacular 4th of July celebration complete with the show's new Giant Wheel and an amazing fireworks display. “We parked 480 cars for the 4th of July; it was an absolute success. We ended up being just a little bit off from what we would've earned if we were traveling,” says Pfeffer. Perhaps the biggest spectacle of the weekend was the fireworks display, the only professional show in the area which Pfeffer was able to set up with the help of his neighbor who works for a fireworks company and has suffered quite the financial hit amid the COVID-19 pandemic.

Tons of Fun staff members have created an extensive safety plan for the Fun Zone. Masks are required and rides are sanitized and wiped down on an hourly rotation. Pfeffer himself has been operating the Giant Wheel and has found it convenient to wipe down the center poles and doors of each gondola as customers exit and new riders load on. “By the time one group exits the gondola the next group is turning in their tickets and getting ready to step in so it's the perfect amount of time to give things a quick wipe-down,” says Pfeffer. Generally, Pfeffer leaves extra sanitation measures up to the discretion of the operator, but certain attractions have specific requirements; “everybody must use sanitizer up to the elbows and adults have to wear masks when going through the funhouse. After every cycle of the Bear Affair we spray the seats and the steering wheel because these are more enclosed environments,” he says. The Fun Zone also has 3 fence-mounted sanitizers from Amusement Wraps for guests and operators to use. “All of our customers have been happy with our sanitizing processes and we haven't had any complaints. Really, people have been extremely positive and complimentary,” says Pfeffer. 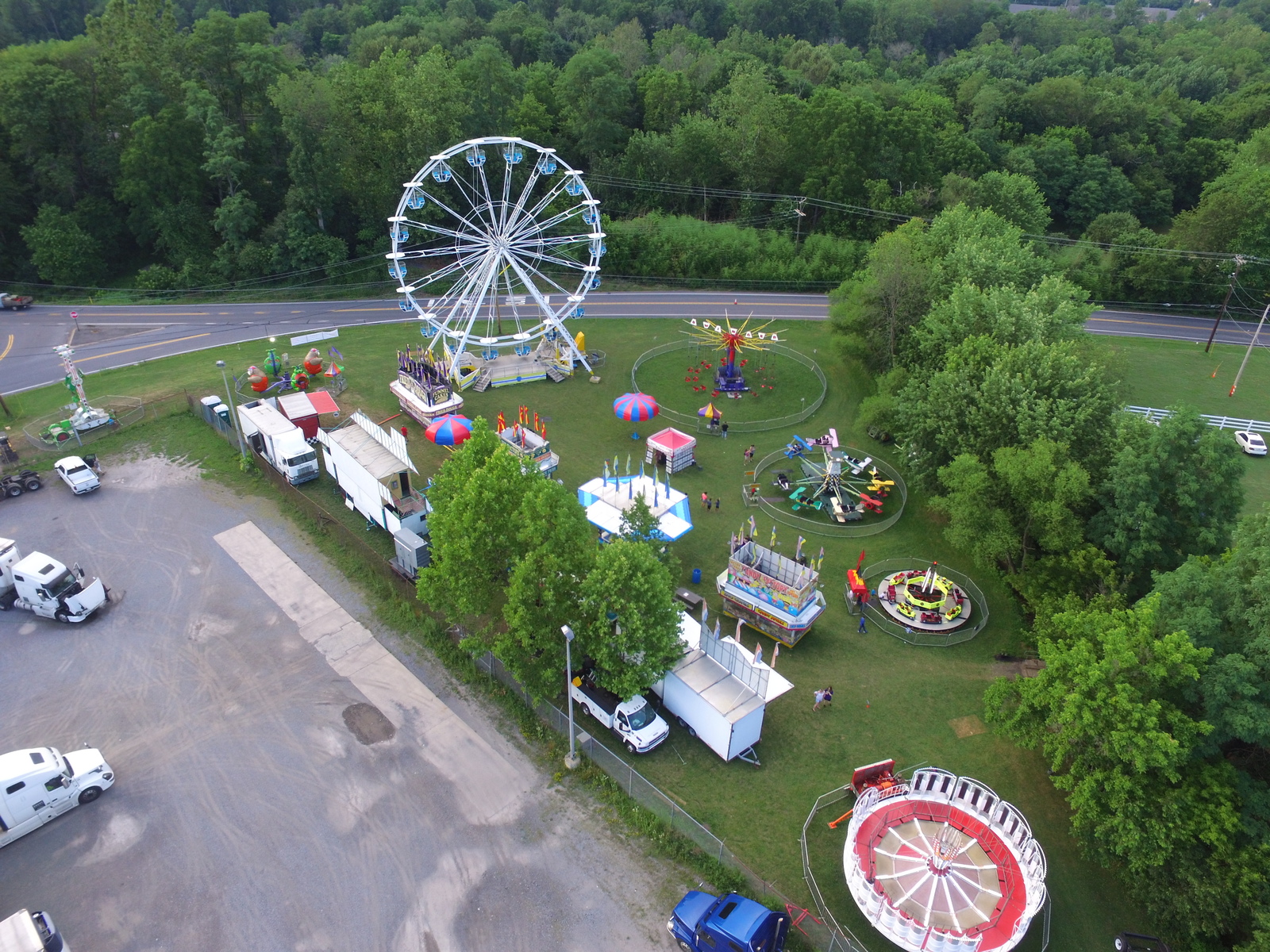 Moving forward, the Fun Zone will be open every weekend throughout the Summer, Thursday-Sunday from 4pm-9pm. Pfeffer plans to take a couple of weeks off in August to move to two of his regularly scheduled events which are still planning to operate. Originally, when Pfeffer's county began reopening, about 6 of his events were prepared to still open in the late Summer. “We invited our event sponsors out to see the Fun Zone and I think it made them feel more comfortable about our ability to operate,” says Pfeffer. However, the mood seemed to change after 4th of July weekend; “the media stories seemed to turn into more doom and gloom and 4 of those 6 events ended up canceling,” he says. Hoping the last 2 events go on, Pfeffer plans to return to the Fun Zone for a big Labor Day blowout to commemorate the end of the Summer before eventually setting up Halloween and Christmas events on the property. In an effort to continually entice locals to visit the Fun Zone, Pfeffer is taking cues from amusement parks and offering season passes as well as differing entertainment throughout the weekend like DJs, local brewery trucks, and car shows.

As the COVID-19 pandemic continues to negatively affect the outdoor amusement business industry, Pfeffer is grateful for the opportunity to run the Fun Zone and encourages other show owners to do anything they can to operate and get through this tough time. In the last few years, Tons of Fun has grown from a 12 ride show to a 24 ride show; “ I've been in this business for 30 years now, I bought my first ride as a sophomore in high school in 1999 and now I own more than half the equipment on my dad's show,” says Pfeffer. “For me, this business is my passion and I'm not going down without a fight.” 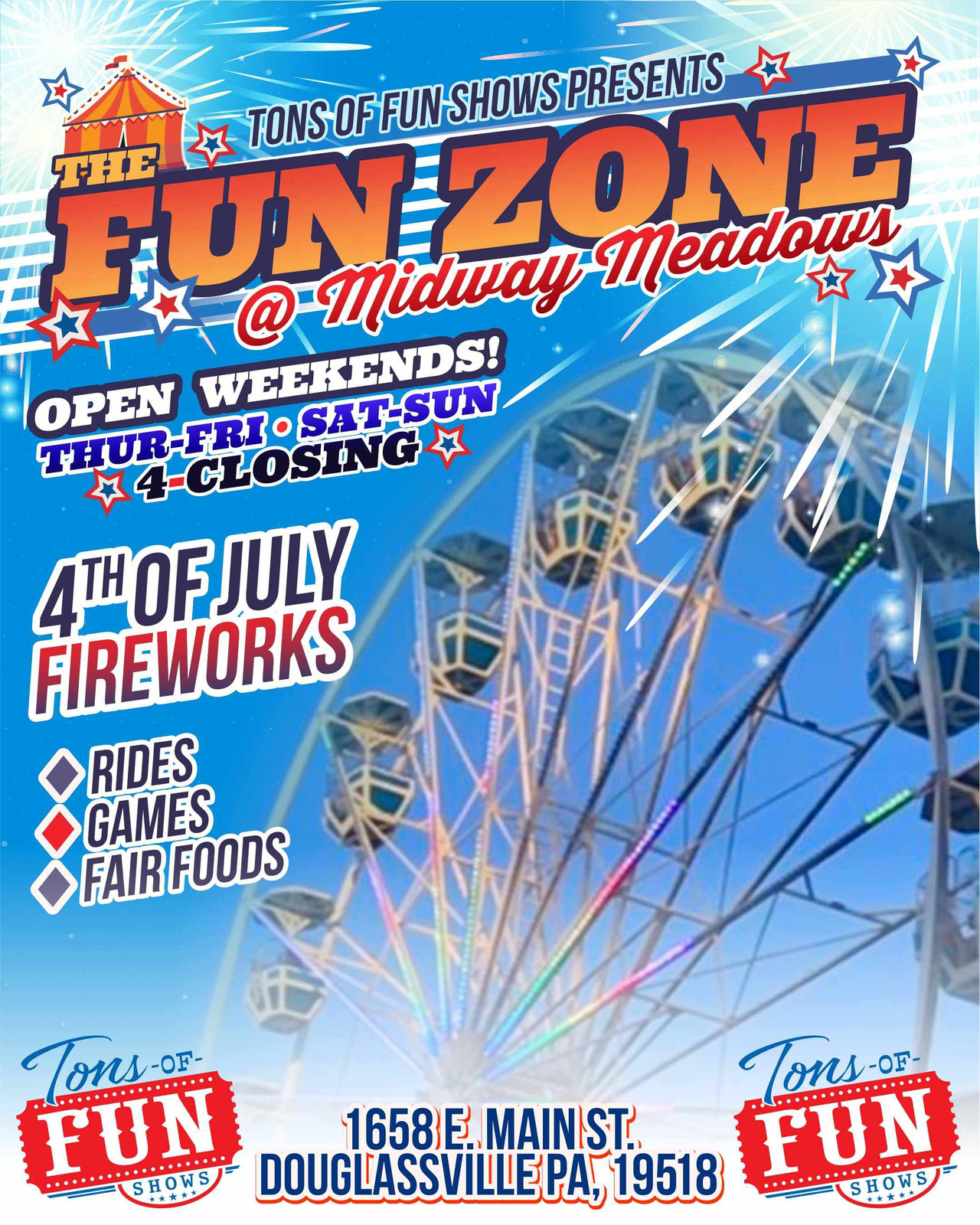 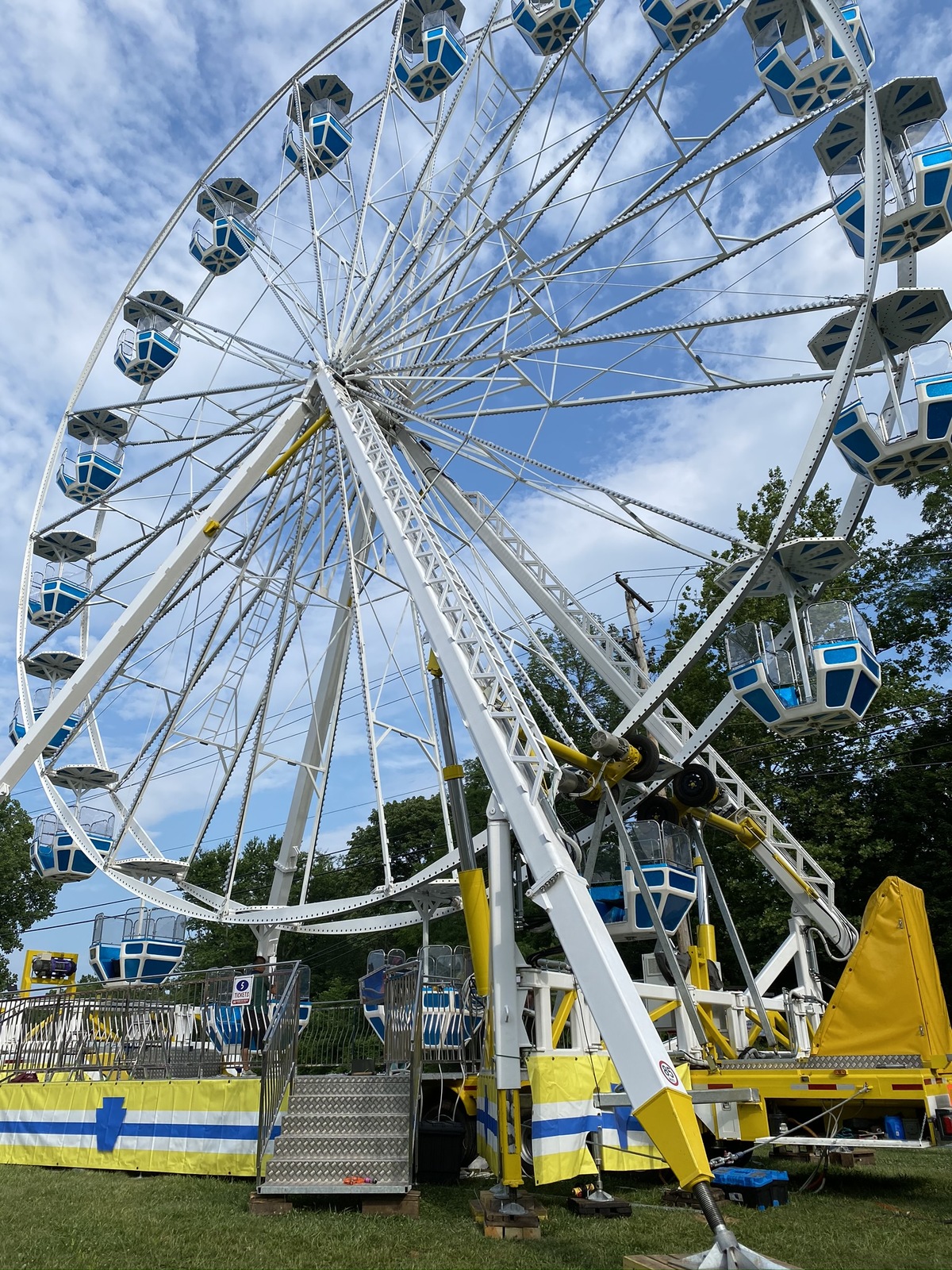 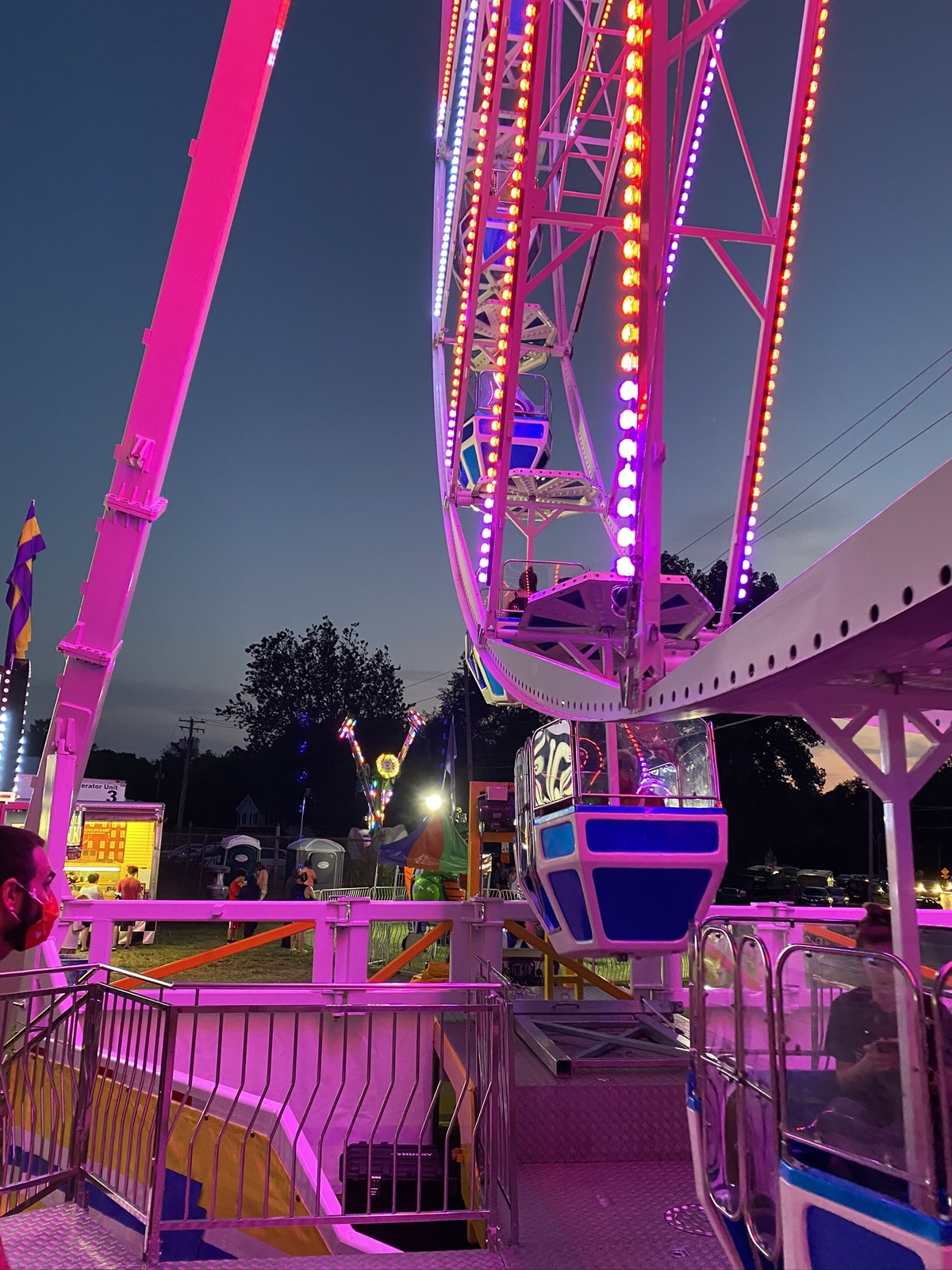 Tons of Fun Shows opens the FUN ZONE at its property in Douglasville, PA

The show set up a select number of rides, games, and food on its property outside of its winter quarters and is open through the summer, Thursday through Sunday.