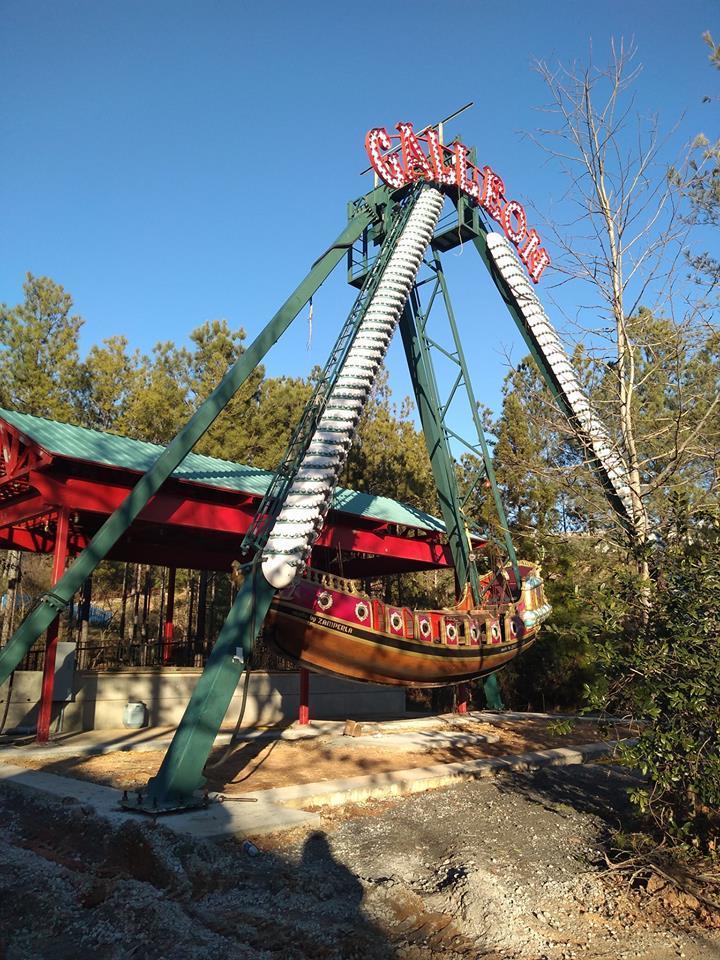 The Free Fall Slide is 75-feet tall, and billed as a thrilling speed slide. There's plenty of reason to call the water slide a thrill: it takes riders down a sharply steep downward plunge from almost eight stories up. It opened at the very end of the park's 2018 season but was in preview mode at that time.

Also new in the water park in 2019, the Twister water slide, which will wrap around the FreeFall. From preview images, the Twister looks to be a body slide, and twists around several times around both sides of the FreeFall drop slide. Twister is constructed of bright primary yellow and red slide pieces, adding colorful excitement to the FreeFall area.

The Galleon is a classic swinging ship ride, designed to appeal to all ages; the ride was originally located at Bowcraft Amusements in New Jersey. The pendulum-style ride was manufactured by the Italian ride designer Zamperla.

The park has worked hard in recent years to add new rides to the dry side of the park, and the Koch family, who took over the park in 2014 are building on major ride expansions in the last several years. A shiny new locker area was just added to the park for guests, and in 2018, the park added a Tilt A Whirl, The Rockin' Tug, also from Zamperla, the Yo-Yo from Chance Rides, and the Scrambler, from the Eli Bridge Company -- all family-friendly rides.

Perhaps the largest scale attraction on the dry park side to date was the reintroduction of the park's roller coaster, Rampage, in 2015. Created by Custom Coasters International, the classic wooden coaster rises to a height of 120 feet at operates at a peek speed of 56 miles per hour. Its reintroduction was one of the central points of the Kochs' revitalization of the park, a bellowed attraction that was shuttered when previous owners closed the ride to exclusively center on the water park.

Dan Koch, company president and the park's co-owner, says that the roller coaster was once the “focal point” of the park, and received “national accolades as one of the best wooden coasters in the world.”

While the park is going by one name, Alabama Splash Adventure, and offers the same admission for both the wet and dry side, the park is also known as Alabama Splash Adventure Water Park and Alabama Adventure Theme Park. The Kochs' began their five-year plan to revive the amusement park and make both the waterpark and dry rides bigger and better: the plan began in 2014, and has continued apace. At that time, he remarked that “We are going to make this the number one tourist attraction in the state of Alabama.”

According to Koch, with the introduction of more new rides for the 2019 season, all focused on the family “The kids, parents, and even grandparents can all ride, laugh, and have fun.” The park's restoration has continued over the last several years.

Koch adds “Each year we grow or improve the park as budget allows…our family wants Alabama Adventure & Splash Adventure to be the number one choice for family fun and family memories for generations to come.”

It's not just the dry side of the park that the Koch family is expanding. The 89-acre park has a wide range of slides, waves, and lazy rivers on the water side; including a brand new children's slide complex with five slides, two water play areas, shade, and a new restaurant called Splash Island. That attraction, which opened in 2018, is a strong draw for area residents in hot Alabama summers, Koch notes. Guests must be under 54” tall to hang out there.

The Mist-ical Maze water attraction, with 4600-square-feet of twists and turns, is another recently added and unique draw for the water park; the maze includes water spouts, showers, and “downpours.”

There is also a dive show in the waterpark area, according to co-owner Pat Koch.

The park was called VisionLand when it opened in 1998, planned and established by a consortium of local community governments. It fell on hard times until the mother and son duo of the Kochs took over. The two are veterans in the amusement business, having operated the Indiana park Santa Claus Land (Holiday World) and its own water park side, known as Splashin' Safari.

Located between Birmingham and Tuscaloosa, Ala., Alabama Splash now operates May through Labor Day, along with weekends in October for its fall festival. All guest admissions include free parking, sunscreen, free inner tubes, and in-park WiFi.

Season passes are available for a low rate this season, and include all of the above plus free soft drinks. Passes or tickets are required for all guests over the age of 2. Currently, the park is offering a variety of perks such as receiving an additional $20 to spend at the park for an additional $7 fee. Season passes are $65 with no bonus cash and $72 with the cash for two park meals. The park has a variety of food to choose from, with the most unique item a pulled pork sandwich at The General's diner, pies, and seasonally flavored Funnel Cakes.

Daily admission ranges from $27 for seniors and tons to $32 for adults, as designated by height.

The park will be entering its 6th season under the guidance of the Koch family this year. Last summer, attendance was at all-time high for the park, and the family hopes that 2019 will bring more of the same.