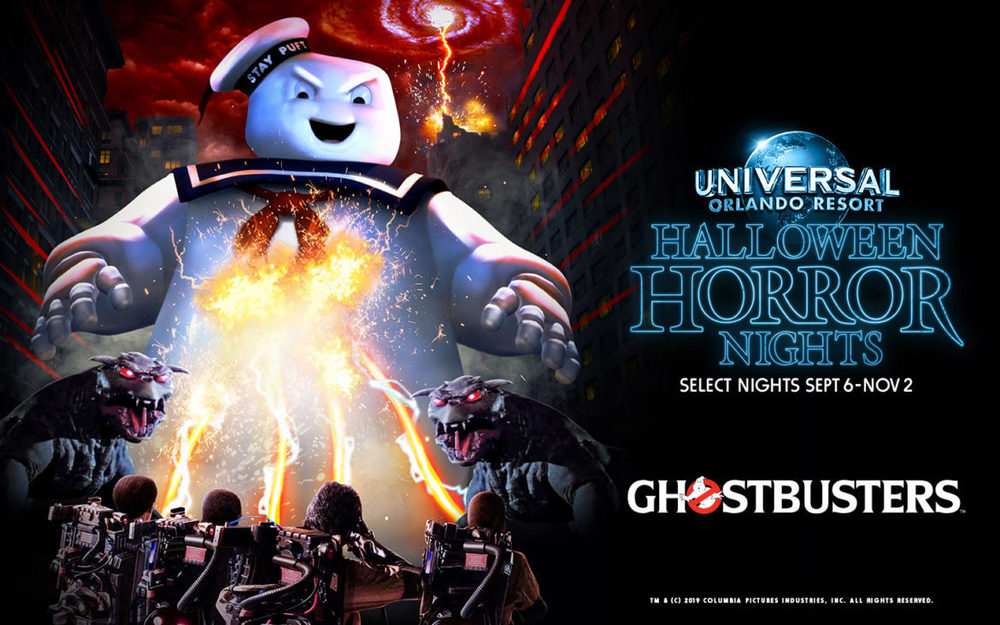 At Universal Studios, whether in Hollywood or Orlando, thrill-seekers are ready for the gates of hell to open, or rather, for Halloween Horror Nights’ new mazes to make their first public appearances.

For 2019, mazes in Florida include six attractions based on classic properties, and four invented for the park. From Ghostbusters and Us to Graveyard Games, there’s something blood curdling to appeal to many different legions of scare fans.

House of 1000 Corpses marks horror/rock icon Rob Zombie’s debut as a director, and as the lure behind the maze of the same name. Like the film, the house represents the Firefly Family and their evil ways.

Killer Klowns from Outer Space is horror-comedy just like its namesake film, and includes interactive features such as light-up buttons to push on the walls to trigger a scare, and a water-based gag. The large scale Klownzilla that concludes the maze is described as the largest puppet ever used by Halloween Horror Nights.

Depth of Fear is a submarine once run by a deep-sea mining company that unleashed creatures known as the Mouthbrooders, known to spit their eggs into human hosts. They lurk behind pipes and wiring; actual water is featured in the maze.

The Stranger Things maze should be popular with the Netflix series’ abundant fans, and it features scenes from season 2 and 3. Here, too a puppet may well take center stage; the creature needs three different people to run it.

Graveyard Games, an original trick or treat type of maze with cemeteries, ghosts, and a Facebook-Live-stream about the adventures of graveyard-messing teens Sid and Nancy.

Ghostbusters offers a lighter-hearted look at graveyard denizens. Here, the familiar and iconic team battles the library ghost, Slimer, Gozer, and the Stay Puft Marshmallow Man. The proton packs that are used in the maze are reportedly based on those included in the upcoming Ghostbusters film sequel.

Nightingales: Blood Pit has darker intent, with beasts that feed on the dead and dying, this year in Ancient Rome. It’s described as an extremely gory maze.

Universal Monsters gives maze-goers a walk-through Dracula’s castle, the Black Lagoon, and The Mummy’s tomb among others. Terrifyingly costumed monsters dwell in these and other locations.

Us, based on the Jordan Peele film, is filled with knife-wielding semi-human twins, including a concluding look for attendees in a mirror of their own making.

For scare zones, park-goers will experience yet another Rob Zombie attraction with Hillbilly Deluxe. For more than one zombie, there’s Zombieland Double Tap, where following the stringent rules is a necessity to avoid annihilation. Anarch-cade, like the Stranger Things maze, also takes on the 80s, here with an evil filled 80s-style video arcade setting. Vikings Undead gives attendees horned-helmet evil; the deadly world of star-making features scalpel wielding doctors at Vanity Ball.

Guests can dine on Stranger Things’ themed food and drink at the Starcourt Mall, also known as tent pop-up dining locations with Chinese food, subs, and perhaps most terrifying of all, chocolate dipped bacon on a stick. Elsewhere hungry guests and ghouls will find Ghostbusters ghost trap popcorn, pizza fries and s’mores fries among other offerings.

Meanwhile in Hollywood, Universal’s mazes offer a few different scares. Stranger Things, Us, Ghostbusters, Killer Klowns, House of 1000 Corpses, are in place here as well as Orlando, with their frightening riffs on existing film and TV properties.

However, other original offerings include Frankenstein Meets the Wolfman, in a classic battleground between monsters’ scenario which is the west coast’s version of the Hollywood Monsters maze in Florida. Also present will be Creepshow, a walk-through led by The Creep himself through five cult comic book scenarios. The Curse of Pandora’s Box leads visitors into a realm initiated by the box that should not be opened; they are guided by a demonic temptress – Pandora herself. Holidayz in Hell gives maze-goers a run beyond Halloween terrror, into horrifying July 4th, Christmas, and Easter settings. Demented bunnies and a psychotic Uncle Sam are part of the premise. And the permanent Walking Dead attraction is gussied up with additional scares and scare-actors for the HHN season.

Five major scare zones add to the fun here: Spirits and Demons of the East, Christmas in Hell, Fallen Angelz, the multi-cultural-themed All Hallows Evil, and Toxic Tunnel, which serves as a portal to mazes on the lower lot. Open rides include The Simpsons, The Mummy, Jurassic World, and Transformers.

Every Thursday, the park will feature a new event, billed as Throwback Thursdays. Hits from the 80s are played by a live band or a DJ-hosted dance event; guests are encouraged to come in their best 80s attire – like the Orlando scare zone Anarch-cade, this event serves as a good tie-in to the Stranger Things’ maze.

There’s more music to be had at the dancing and singing sit-down performances of Jaberwockeez, a returning attraction to the upper lot.

Sadly, for many Universal Theme Park fans, the studio tour, usually reconfigured as the Terror Tram, will not be running this year. The idea was to squeeze in two more event mazes instead.