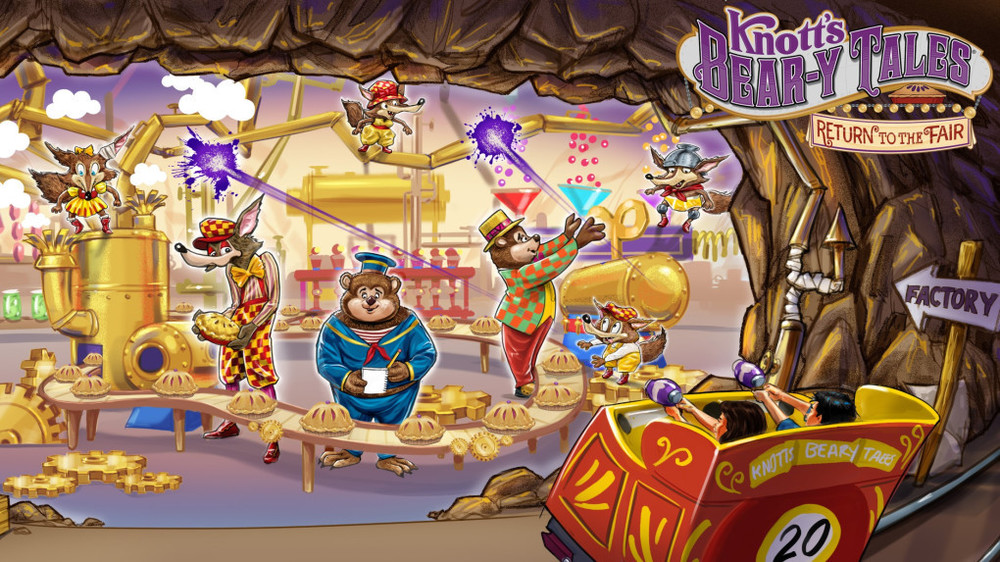 2020 marks the 100th anniversary of Knott's Berry Farm, and with that in mind, the theme park is bringing back their iconic Bear-y Tales dark ride. This time around the attraction will be a tribute to the original one-of-a-kind attraction and its catchy theme song.

The new digital remake of Bear-y Tales will pair Knott's once more with Montreal-based ride creator Triotech, which was the company behind Voyage to the Iron Reef as well.

“Knott's Bear-y Tales carries a great significance and evokes an intense sense of nostalgia for those who first experienced the ride as children in the ‘70s and ‘80s,” Triotech's VP Creative Nol Van Genuchten, relates. “It's our goal to capture the spirit, creativity and originality that made this dark ride such a success, and thus honoring the cherished Triotech memories of the original.” The company is designing the attraction and the scenic theming for the new ride, as well as producing the animation and gaming system.

Triotech's founder, president and CEO Ernest Yale adds “Triotech is thrilled to work with the amazing team at Knott's Berry Farm and Cedar Fair on this high-profile project. For this unique attraction, the Knott's team gave us access to a wealth of archive materials that have been key in understanding the original Knott's Bear-y Tales.”

As in its original incarnation, Bear-y Tales riders will follow Boysen Bear and Girlsen Bear in their travels to the Country Fair, hoping to win a blue ribbon for their boysenberry pie. Crafty Coyote and his mischievous pups will also return with their eyes pinned on the pies and stealing them on their minds. However, new digitally rendered scenes will be used to recreate the Boysenberry Pie Factory, Frog Forest, Fortune Teller Camp, Thunder Cave and Weird Woods in a more high-tech way than in the original attraction.

And, the new version will find riders armed with “jelly blasters” which they can train on those thieving coyotes stealing boysenberry pies from the factory.

The concept art that's been released depicting the new attraction reveals bears working in the factory as pies pass on a conveyor belt. Coyote pups create chaos in the bakery. Riders fire purple boysenberry jelly at the coyotes from their blasters.

According to Knott's vice president and general manager Jon Storbeck, “The return of Knott's Bear-y Tales is perfect for the 100th anniversary because it brings back one of the park's most nostalgic and beloved attractions in an innovative 4-D dark ride format that will delight an entirely new generation of fans.”

The original Knott's Bear-y Tales dark ride was commissioned by the Knott family and created by Disney Imagineer Rolly Crump. Crump, also a skilled fine artist,  worked on the Enchanted Tiki Room, Haunted Mansion and It's a Small World attractions at Disneyland.

The ride opened in 1975 as the marquee attraction in the newly re-themed Roaring '20s section of the park.
The dark ride journey took riders through the Frog Forest, Thunder Cave, Fortune Teller Camp and the Weird Woods on an adventure as the bear family of Raz, Boysen, Girlsen, Elder and Flapper traveled to the annual country fair to sell their pies. An early adapter to the idea of including more immersive elements in rides, Bear-y Tales also provided riders with a scent experience: a berry smell filled the pie and preserve bakery scene.

“Riders once again will visit and see the boysenberry pie factory,” Knott's vice president of entertainment Ken Parks relates. “And yes, there will be the smell of boysenberry in the air.” He adds “We really wanted to be sure we got this right.”

The location which the ride will return to has passed through several dark ride attractions. Following the original Knott's Bear-y Tales was the Kingdom of the Dinosaurs attraction that took riders through a look at geological history starting in 1987, before it was replaced by Iron Reef. Iron Reef riders traverse a series of underwater scenes projected on curving screens; like the new version of Bear-y Tales, the ride is interactive, allowing guests to fire at aqua-mechanical creatures with a “freeze ray gun.”

The Knott's design team hid Easter eggs clues throughout the Iron Reef dark ride for the park's history fans. In one scene, an old Knott's Bear-y Tales ride vehicle rusts on the ocean floor, strategically placed in front of a Roaring '20s neon sign that once stood on the attraction's building.

Besides the return of Knott's Bear-y Tales, the park's 100-year history will feature a tribute to the theme park's founders with anniversary-themed décor, plenty of live entertainment, and themed food and merchandise all summer long, including many boysenberry treats.