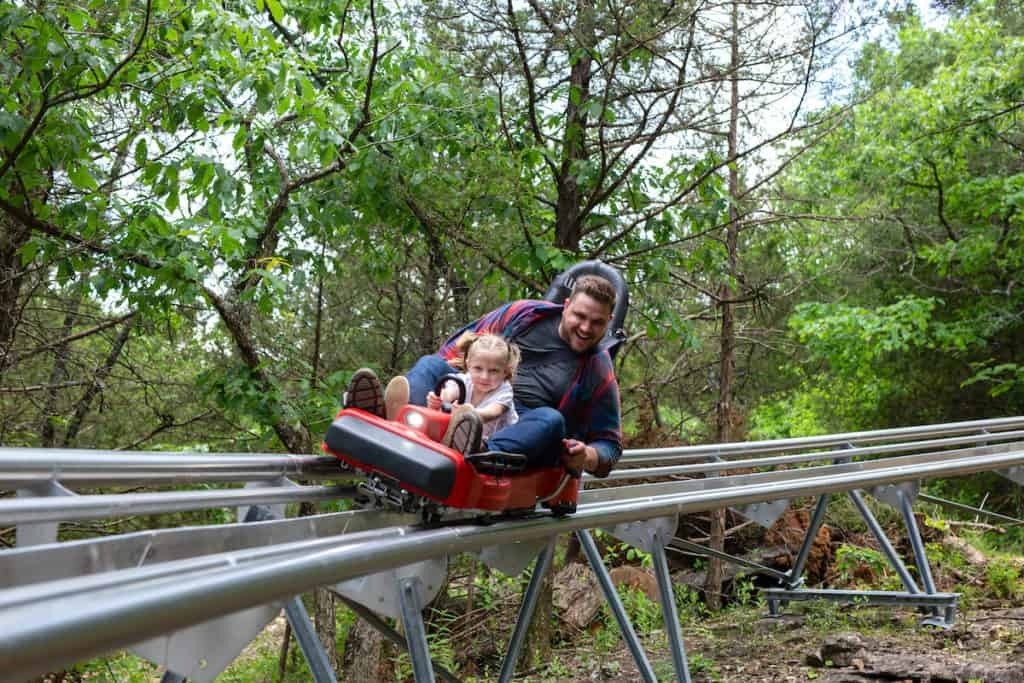 Described as the fastest, longest, and most scenic downhill coaster, Copperhead Mountain Coaster at Shepherd's Adventure Park lives up to its name with snaking curves and loops over a 3350-foot course.

The ride is open from 10 a.m. to 10 p.m. throughout the park's season and illuminated with bright LEDs at night.

The ride features a series of drops, multiple curves and turns as it sails through natural rock and tree formations. Manufactured by Wiegand Sports USA, the attraction opened in June. Park co-owner Jeff Johnson asserts his pleasure with the ride, and the park's work with Wiegand. The close to one mile track makes the park able to claim Copperhead Mountain as the longest Alpine roller coaster in Branson.

According to Johnson, “We wanted a high impact attraction to get a lot of people through.” The ride has 40 cars that are adjustable in speed by the riders. Each car is separated by approximately 80 feet of track between carts, allowing for plenty of leverage for guests to manipulate their own unique speeding experience. Comparing the coaster to other alpine coaster attractions, he asserts “We have a wider, sweeping turn where the others do not. [Riders] will drop over 300 feet in elevation. It's a very fun and exciting ride.”

The coaster was also designed to fit the natural setting of the park. “A mountain coaster is a little more environmentally friendly in the sense that it's using the elevation of the property itself and taking folks through…the earth's terrain as the bed underneath the track,” Johnson says.

The ride is positioned on a hill with a 300-foot vertical fall. Returning riders to the boarding area at the park entrance, the thrill ride is operable even in inclement weather, Jessica Wedel of Wiegand relates. "It can operate in the rain and snow…There are rain bonnets or rain shields that go over it, which pretty much keeps the riders dry." 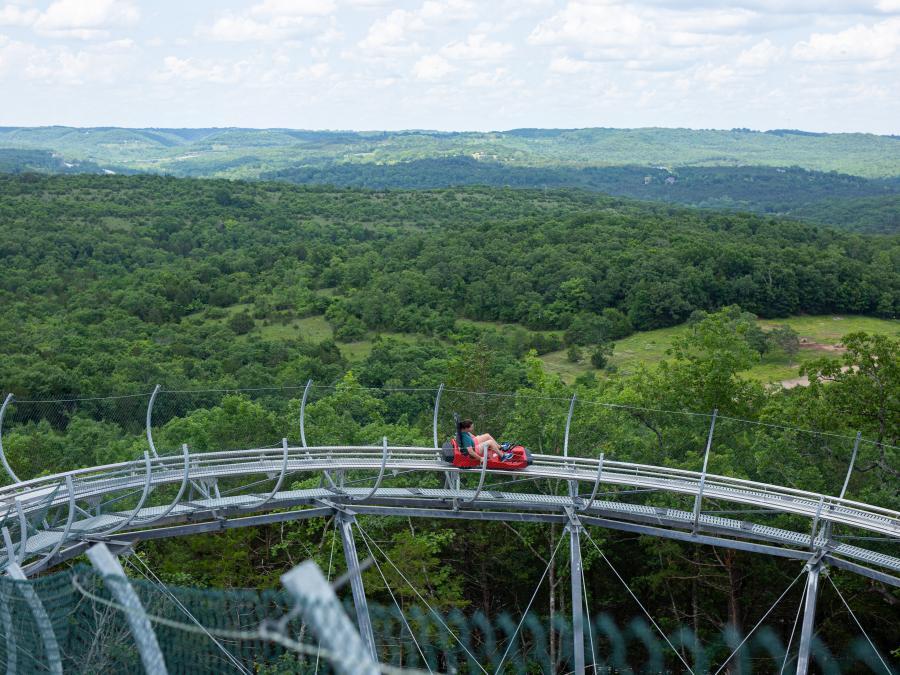 The ride can also be themed for seasonal use. In October, it was Halloween themed, with decorations and haunts along the way for riders as they zoom by on the “Haunted Copperhead Mountain Coaster” from dusk to 10 p.m. A Christmas holiday attraction is also planned for the coaster as a part of the Shepherd's Christmas. The park will be offering a North Pole Adventure family walk through and several dinner theater holiday themed performances. Johnson looks forward to theming the coaster as “Rudolph's Runaway Sleigh Ride.”

Construction for Copperhead Mountain Coaster started late last fall. While it was somewhat of a challenge to staff up to handle the construction project during the height of the COVID-19 pandemic, the ride nonetheless opened in June of 2021.

Wiegand itself is busy building other alpine coasters – the popular style is represented at 40 locations throughout the U.S. According to Torsten Wedel, also of Wiegand Sports USA, the company opened the Mustang Coaster in Estes Park, Colorado, just prior to Copperhead. Colorado's newest Alpine coaster is built on ranch land outside the greater Denver area, which the ranch's owner, Cody Rex Walker, describes as a way to “give the next generation of my family a way to keep the land from becoming yet more homes…a wild thrilling fast trail ride but still a horseless trail ride.”

Wiegand also opened the Mountain Coaster at Highlands Outpost in Scaly Mountain North Carolina, and the Canyon Coaster in Williams, Arizona, located close to the Grand Canyon, both this fall. The Canyon Coaster track was under construction as of September 25th. The company is working on other rides from Washington to Wisconsin for both 2022 and 2023.

At Shepherd's Adventure Park, Johnson terms the coaster an unmitigated success, drawing lots of attendees to the park. “The coaster is bringing them back over and over again," he attests.

The park has installed a number of new outdoor adventures recently, including the Vigilante Extreme Zip Rider, that launches riders from 140-feet up, and accelerates to up to 55 miles per hour along a half mile course. Less about speed than exploration is the Zipline Canopy Tour, which allows guests to fly high along tree top platforms over a period of 90 minutes to two hours.

But it's the Copperhead Mountain Coaster's sinuous curves that are proving the biggest draw to the park this fall. Riders can participate as the active driver or as a rider. Drivers pay $16, a passenger $10. Riders must be 38 inches tall and at least three years old; drivers need to be 54 inches tall. Someone age 16 or older must be in the coaster car at all times.

As to the coaster's name, while the track may be slithery, the origin is in the original Shepherd of the Hills play for which the park is named, in which one character says they'll “stomp” a villain like a “young copperhead,” Johnson says.

The coaster adds to a list of new attractions in the Branson area, including the river rafting thrill ride, Mystic River Falls at Silver Dollar City amusement park, which just celebrated its 60th anniversary; and Branson's Aquarium at the Boardwalk. Operating since 2016 in the Branson area, another mountain coaster also offers thrills on the Runaway Mountain Coaster from ADG.