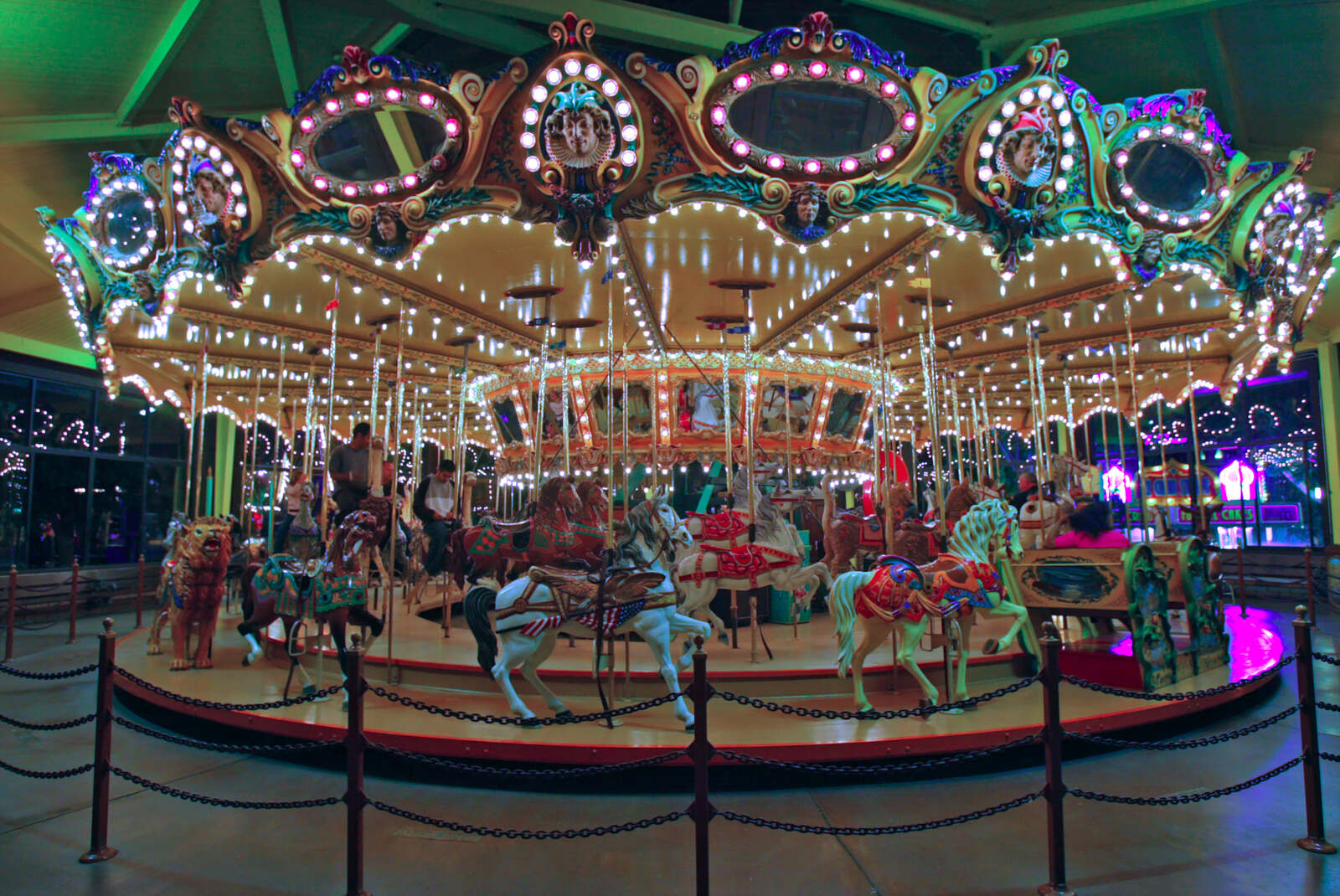 When historic carousels need tender-loving care, it's not always simple to fix and maintain them properly. Across the U.S., traditional carousels are receiving the updates and renovation they need. Now, Castle Amusement Park in Riverside, Calif. is starting the process with their 1910-era Dentzel Menagerial Carousel.

The California amusement company Western Train Company has begun repairing the ride which was one of the first rides in the original Knott's Berry Farm Lagoon, and in place at Castle Amusement Park since the early 1980s. It was first installed and originally maintained by the original and long-time owner of Castle Park, Bud Hurlbut of The Hurlbut Amusement Company. The lion and many of the other original carousel figures were replaced by fiberglass copies and sold in 1990, as part of a $2 million Hurlbut Collection Carousel Auction that was held in Southern California.

Western Train Company purchased the rides division of Hurlbut in 2011. The company has created a variety of new train rides and carousels as well as worked to maintain and restore most of the Hurlbut rides. The company recently worked on restoring the two Hurlbut trains that travel a circle around Castle Park's 25-acres, The Riverside Express, which is an actual coal-burning locomotive, and the mini-sized Castle Park railroad. The Dentzel Carousel is scheduled to be back in place at the park soon. There are currently 21 rides in all at the park, which reopened following COVID-19 closing in April 2021.

The park has always been innovative - and filled with classic rides. Hurlbut designed many of the first Knott's Berry Farm rides and was a friend – and many say an inspiration to – Walt Disney himself. Prior to the park's reopening, several Castle Park buildings and attraction queues were repainted, outdoor seating areas were added, and two attractions, the Little Dipper kid's coaster and a kiddie Motorcycle ride, were retired.

Besides the carousel, another ride located at Castle Park once had a home at Knott's – the antique car ride. The attraction features a variety of vintage automobiles that pass through a scenic series of miniatures buildings replete with water wheels and gas pumps. 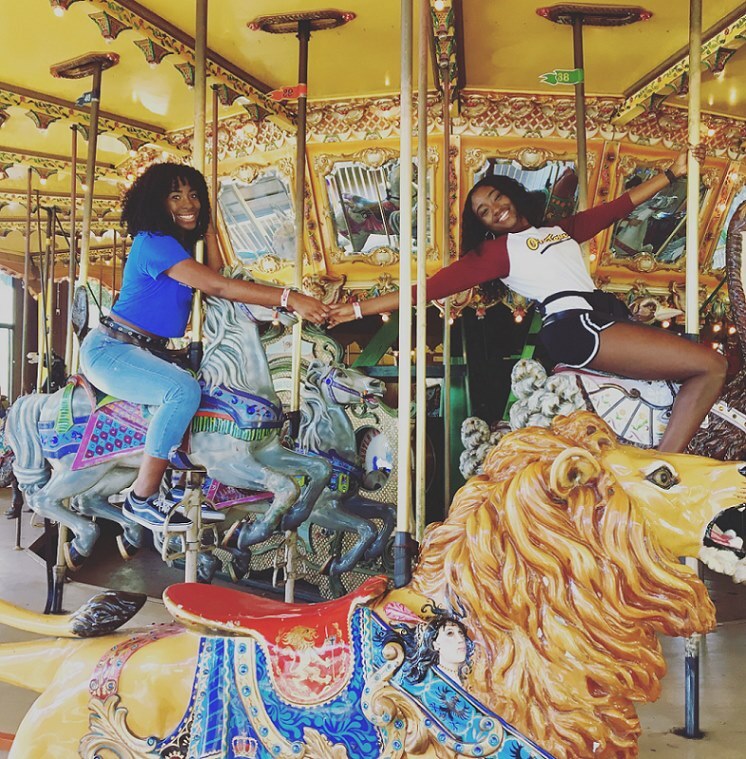 The park was founded by Hurlbut in 1976. He began customizing miniature trains in 1943, and opened the Hurlbut Amusement Company in 1945, providing attractions such as a Ferris wheel, boat ride, and mini train at what was then Crawford's Kiddieland in El Monte, Calif. It was there that Hurlbut met Walt Disney, and later connected with Walter Knott, Knott's Berry Farm founder, to operate the Dentzel carousel. He also designed two still-popular rides at Knott's, the Calico Mine Ride and the Timber Mountain Log Ride.

The innovative amusement operator even helped create Knott's Halloween scare attraction, Knott's Scary Farm, while clad in a gorilla suit to scare the riders on the Mine Train in the early 1970s. He brought the idea of a haunted Halloween event to Castle Park  in 1977 with its first annual Halloween Surprise Party.
This year, the park ran it's Halloween haunt, now called Castle Dark. Presale tickets were available through September 30th for $29.99 and include admission to three mazes, four scare zones and rides and golf starting at 7 p.m. October 1st through 31st.

While Hurlbut held a partial interest in Knott's, he sold his share to work on Castle Park, adding rides such as the Tilt-a-Whirl, Whip, and bumper cars to the list of attractions. Hurlbut sold the park in 1999.

Besides Hurlbut's original Denzel carousel refurbishment, there is a variety of other carousel news in the amusement industry this year. The Hampton Carousel in Hampton, Va., celebrated its 100th birthday in 2020, but officially celebrated July 25th of this year, in time for National Carousel Day. Along with free rides, the carousel attraction offered specially minted commemorative coins painted with carousel horses on one side and the seal of the city of Hampton on the other.

The carousel,  once the centerpiece of the Buckroe Beach Amusement Park, was built in 1920 by the Philadelphia Toboggan Company.  When the park closed the carousel and its hand-carved classic horses were restored and reinstalled in a weather-safe pavilion elsewhere in the city. It's one of only 170 original, antique wooden carousels located in the U.S. today.

Another such restored carousel is the Loof Carousel recently reopened in Pawtucket, Rhode Island at the city's Slater Park. The renovation and restoration of the Looff Carousel and its building was a cooperative project that took place in an alliance with the volunteer group Friends of the Carousel and the city of Pawtucket. The carousel was built in 1895 by Charles I. D. Looff, and originally installed at Lee Funland in New York.

Among its unique features are a North Tonawanda Military band organ, which was converted in 1920 to play Wurlitzer rolls. It sports 44 standing horses, six other menagerie animals, and two colorful chariots. Interestingly, it was once a very speedy carousel, circling at 14 miles per hour. Now it operates at 9 miles per hour and still holds the distinction of being one of the fastest moving carousels in the nation.

At Six Flags Amusement Park in St. Louis, Mo., the 68 wooden horses and two chariots of the Grand Ole Carousel are also receiving a major makeover. German and Italian woodcarvers for the Philadelphia Toboggan Co. designed the ride in 1915. From new glass eyeballs to freshly carved cypress-wood missing parts and detailed painted work, the carousel ponies will be receiving a major upgrade.

Philadelphia Toboggan Co., the original creators, are currently Philadelphia Toboggan Coasters, and are one of the world's oldest operating roller coaster and amusement ride manufacturing companies. The carousel, however, is being restored by Six Flags design and art staff. It will reopen at the end of 2022 or the start of 2023.

From Riverside to Missouri, long may these storied classic carousels spin.