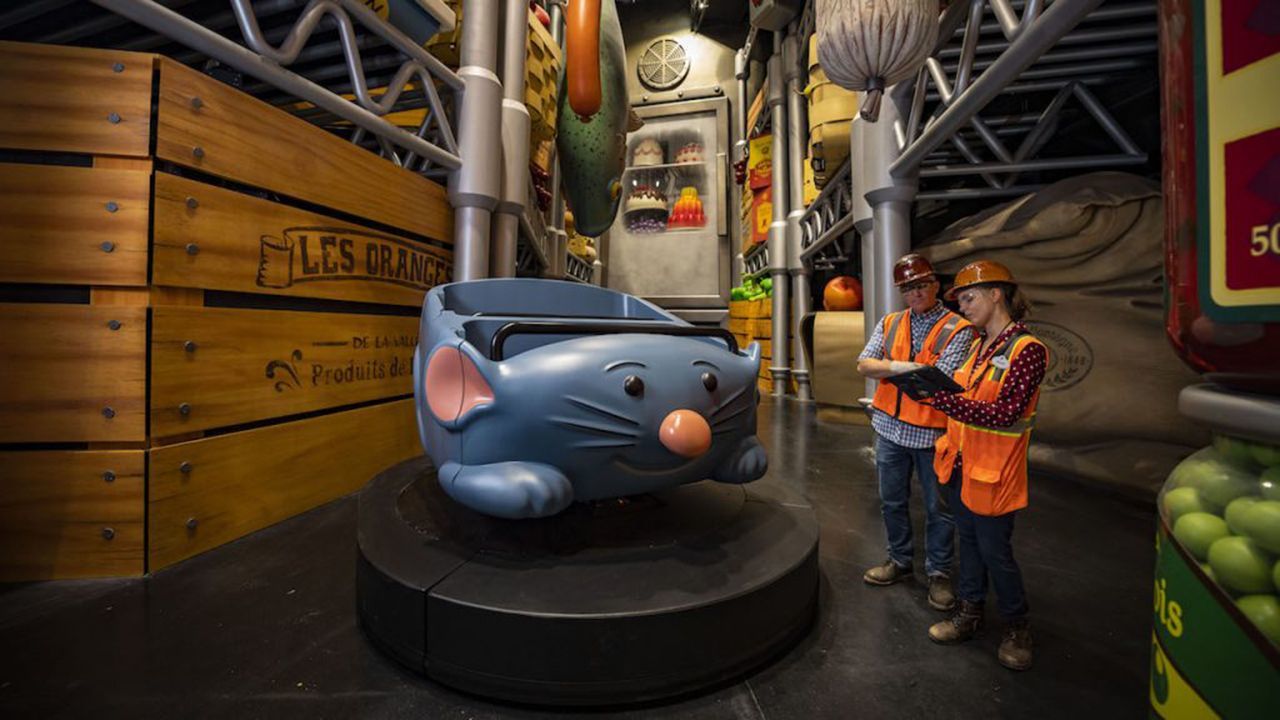 At Disney's Epcot in Orlando, many changes are coming, with some debuting for 2020, but The Seas with Nemo & Friends, which was awash with rumors about a closing, is keeping its tidal treasures in place.

According to Disney Parks, Experiences and Products Chairman Bob Chapek, Epcot will be joined with four neighborhoods: World Showcase, World Celebration, World Nature and World Discovery. Each will take guests to a new destination of experiential, authentic adventure, Chapek says.

The World Nature area focuses on understanding and preserving the natural world. The area includes The Land and The Seas with Nemo & Friends pavilions, and will continue to do so, Chapek stresses.

The beloved Nemo ride fueling all those rumors is a gentle experience geared toward the younger set. It's an outgrowth of the Living Seas aquarium which opened in 1986 at the park, home to the largest saltwater aquarium globally until it lost that title in 2004. The pavilion was reimagined to focus on Pixar's popular Nemo, and includes an interactive show featuring Crush the sea turtle as well as Nemo-centric displays throughout the aquarium. The original attraction's Sea Base Alpha theme was replaced by the introduction of Nemo and Friends, some of the first Disney characters brought into Epcot itself. The appeal of this introduction led to the additions of characters from Three Caballeros and Frozen along new with attractions featuring the characters from Ratatouille and Guardians of the Galaxy coming this year to Epcot.

The Seas with Nemo & Friends takes riders deeper into the aquarium via a clammobile, and makes use of animated figures including Mr. Ray, Dory, Marlin, and more appearing to swim with live fish; it also includes a musical finale.
The World Nature area retaining The Seas with Nemo & Friends ride and the aquarium itself, will also soon feature a new experience, Journey of Water, inspired by the film Moana. Guests will be invited to explore a trail and “meet and play with magical, living water.” The idea of the experience is that the water will have a life of its own – like Moana's friend, the ocean. Guests will learn about the importance of the natural water cycle through this concept.
This year sees the debut of a new film in the World Nature area, Awesome Planet, showcasing the diversity and beauty of Earth. The film opens January 17th in the Land Pavilion.

Moving on to the World Discovery area of Epcot, the attractions are focused on tech, science, and intergalactic fun with Guardians of the Galaxy: Cosmic Rewind. That attraction will be the first off-planet experience at Epcot. As such, it will start in the “Galaxarium,” a planetarium-like exhibition comparing the similarities and mysteries of the formation of Earth's galaxy and that of the  Guardians' Xandar. The attraction includes a new Disney innovation:  a storytelling coaster that rotates 360 degrees allowing riders to shift along with the presented action. Story-telling aside, it also includes the first reverse launch on a Disney coaster.

An entirely different immersive experience takes place with an expansion of the Mission: SPACE pavilion: the new restaurant Space 220. Designed to look like a space station, views from the dining room feature day and night views of Earth from 220 miles up. Guests arrive via an elevator with “viewports” providing a look at travel above the planet. The dining experience is operated by the Patina Restaurant Group and will open in February 2020, serving breakfast, lunch, and dinner. While reservations have not yet opened, scaffolding has been removed, making the once-delayed opening look like it will stay as scheduled for February.

Also planned for Epcot is the World Celebration pavilion, which will focus on experiences connecting attendees to the world around them and each other. Spaceship Earth will remain a voyage through time but will feature both new narration and a new musical score as viewers follow a magical “story light” tying the entire journey together. According to Chapek, “New Spaceship Earth will still feature great moments of human history, but instead of inventions and technology, we'll focus on something that binds us all together — storytelling.” He adds that “Many of the scenes you know and love will remain, but we'll bring them to life in amazing new ways…” Neither closure date to work on these updates or complete dates have been announced as yet.

Structural changes will include an elevated view of the park, with a plaza, middle, and sky level; an entrance plaza with green spaces and a reimagined fountain and an area called Dreamers Point. Also a part of this area: a new statue celebrating the legacy of Walt Disney, a wishing tree in an enchanted forest and a story fountain celebrating Disney storytelling.

The World Discovery area will include the United Kingdom pavilion with the first attraction inspired by Mary Poppins. In spring of 2020, the new performance of “HarmonioUS” will mark its opening as the largest nighttime spectacular ever created for a Disney park. Along with iconic music, “HarmonioUS” will feature massive floating set pieces, custom-built LED panels, choreographed moving fountains, lights, and fireworks.

“When you think about the Epcot World Showcase and the World Showcase Lagoon, it really has to be the largest spectacular we've ever created because we've got such a beautiful grand venue for it,” Valiquette asserts.
In summer 2020, the France pavilion opens Remy's Ratatouille Adventure, where guests shrink to the size of Chef Remy and race through Gusteau's restaurant. Summer 2020 will also include the opening of a new French pavilion restaurant,  La Crêperie de Paris, designed to offer both table- and quick-service options with a menu from celebrity chef Jérôme Bocuse.
And, the new “Beauty and the Beast Sing-Along,” also marks its opening in 2020 at the French pavilion, debuting in January 2020. The production is directed by Don Hahn, producer of both the animated and live-action versions of the production's namesake.

Canada Far and Wide in Circle-Vision 360 will also debut in January 2020 in the Canada pavilion with new scenes and a new story, as will the 360-degree formatted Wondrous China film in the China Pavilion.

Planned to coincide with Disney World's 2021 50th anniversary, the PLAY! pavilion will offer a digital interactive city with games, activities and experiences including the opportunity to assist fashion icon Edna Mode on her quest to rid the world of uninspired style, or compete in a water-balloon fight hosted by Huey, Dewey, Louie and Webby. 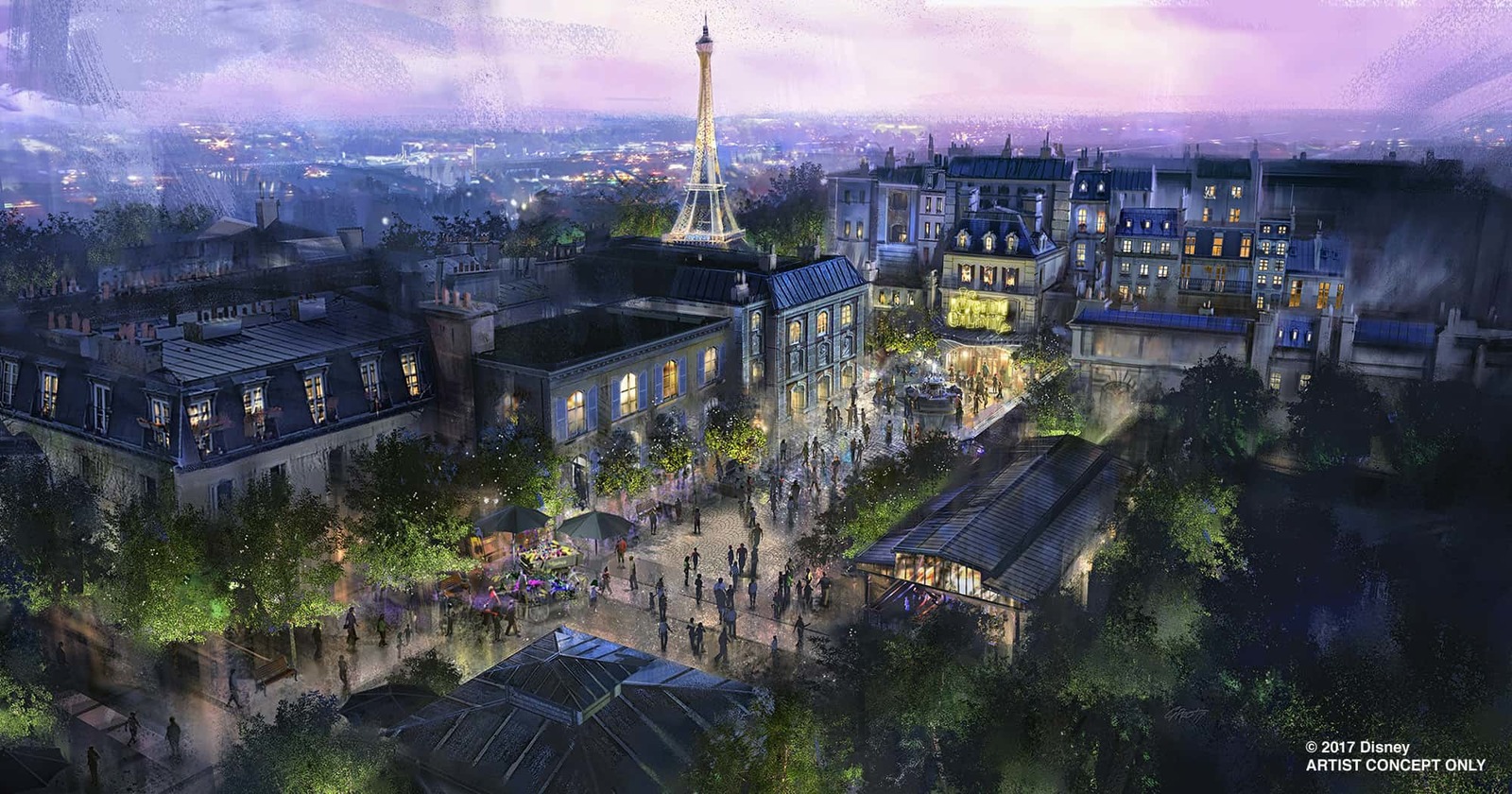