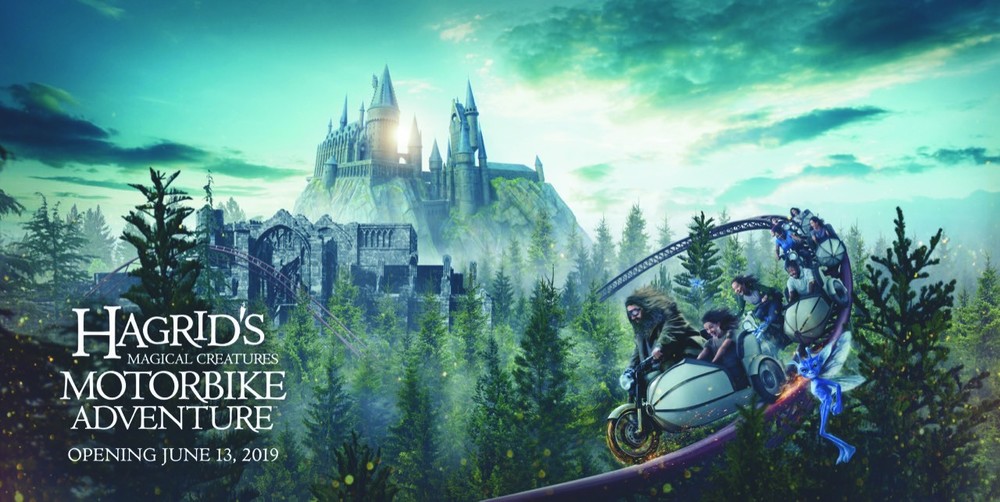 Opened this summer at Universal's Islands of Adventure in Orlando, Fla., Hagrid's Magical Creatures Motorbike Adventure takes guests on a themed coaster that features a record-breaking seven different launches and the longest roller coaster track in Florida. The attraction also features the only vertical drop in the U.S., a 17-foot freefall.

The ride reportedly cost $300 million and takes Universal Orlando guests on a mile-long journey through the infamous Forbidden Forest on Hagrid's iconic motorbike. The journey might only be a mile, but on opening day, June 13th, reaching that mile was a slow slog: there was a ten-hour wait, according to Universal's ride app. The massive line caused park visitors looking to visit other parts of The Wizarding World of Harry Potter to be rerouted through the Jurassic Park section of the park on the opposite side of Islands of Adventure.

This new and much anticipated ride should clearly have less of wait-time following its opening. Starting on Friday, the park will use a virtual queue line to eliminate a massive wait time and line, and alert guests when they should return to the attraction.

The $300-million price tag is due primarily to the props and ambiance of the attraction. More than 1,200 trees were planted within the attraction to make riders feel as if they were in a real forest. For the physical steel coaster alone, most roller coasters cost less than $100 million; as an example, Expedition Everest at Disney's Animal Kingdom cost around that amount.

Hagrid's Magical Creatures Motorbike Adventure is another way for Universal to draw more visitors to its parks. Universal Studios Orlando and Islands of Adventure has increased from 12 million to 20 million guests since 2010, with revenue from all of Universal's theme parks increasing more than 50 per cent over the last ten years. Universal wants that trend to continue, and with lines stretching throughout The Wizarding World of Harry Potter on opening day, it appears that visitors are excited to attend the new attraction.

Waiting guests are kept occupied with an elaborate backstory and queue line exhibits. The ride is located in “an ancient castle previously unseen to Muggles” but known to Hogwarts students as located in the Forbidden Forest, where it is now a nursery for Hagrid's beloved magical creatures.

It's also the location of Hagrid's Care of Magical Creatures class, which guests are invited to attend. Under his tutelage, riders enter his forest to see these magical beings in person. To get there, Potter character Arthur Weasley duplicates an old motorbike and sidecar into a long train, launched through a magical spell.

Both a first-class thrill coaster and a narrative dark ride, Hagrid's Magical Creatures Motorbike Adventure should prove attractive to both Potter fans and coaster fans alike. With an elaborate backstory and an engaging, immersive series of sequences occurring during the coaster thrills, the experience should offer plenty of visuals along with banked curves and sudden drops.

The backstory is spelled out during the queue line, including graffiti on the walls left by past Hogwarts students and other castle inhabitants over the centuries. Riders also progress past a nursery for what appears to be Dragon eggs, plus the room where Hagrid created the Blast-Ended Skrewt.

Once through the queue line, guests enter an arched loading platform with a continuously loading belt, designed to speed passenger loading and elevate the ride's capacity.

Once aboard, audio of a motorbike engine revving plays as riders get onto their motorbike and sidecar and lap belts are lowered in place. Robbie Coltrane narrates a continuous audio track as Hagrid through individual speakers in the front of each seat. While the thrills of the roller coaster itself promise rider excitement, at each launch, new scenes play out. At the first, riders are propelled into one of Hagrid's barns, to view full-grown Skrewt blasting riders, along with an animatronic Hagrid chastising the creature for the blast. The second launch takes riders along high-speed banked curves and dives to the level of a lake.

Other characters are seen including the three-headed dog Fluffy; the enchanted Ford Anglia once positioned in Dragon Challenge's queue, and Cornish Pixies surrounding it. The coaster then dives riders into a fog, and fly into the air on a spike track, dropping backwards from twists and turns as Hagrid narrates a power loss and an attempt to cast a Mending Charm. Riders see a watching Centaur, continue a dark plummet down into Devil's Snare.

At that point, the Hagrid does successfully cast a “releasing spell” and riders experience a drop-track, followed by the appearance of missing Skrewts, instructions to push a large button on the motorbike, and engage the final launch, and the appearance of an animated unicorn and its colt.

In short, from the long lines and guest enthusiasm on opening day, Hagrid's Magical Creatures Motorbike Adventure appears poised for a magical explosion of visitor interest at Universal's Islands of Adventure this summer.