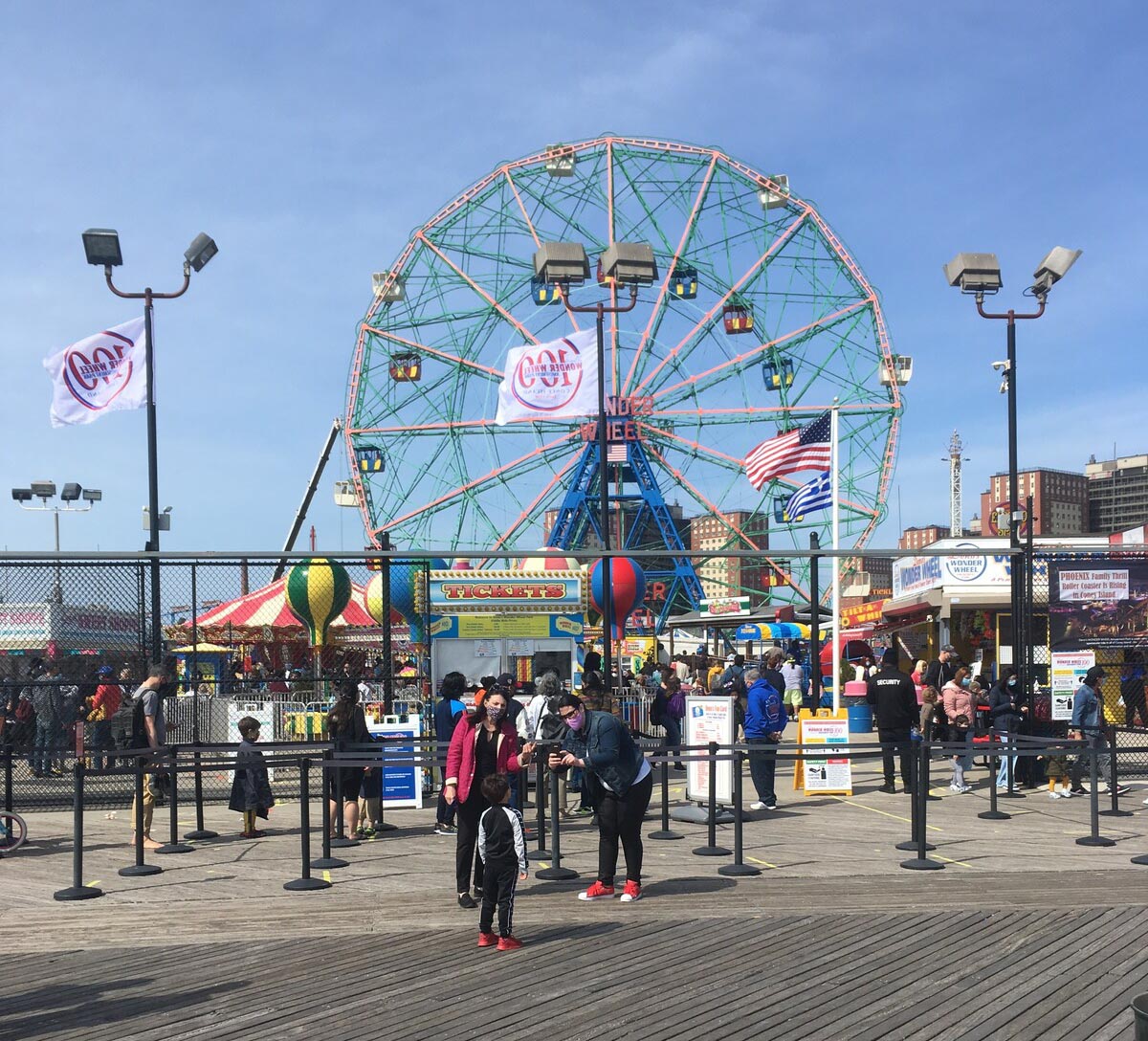 As New York reopens, so do many of the iconic attractions along the Atlantic Coast at Coney Island. Coney Island is open, busy, and filled with New Yorkers eager for a seaside respite from the heat.

The attraction-filled oceanfront boardwalk includes a variety of amusement rides from two major operators and a variety of others. Luna Park, owned by Alessandro Zamperla, features the massive Cyclone roller coaster among its most iconic attractions. The second largest wooden coaster in the world, the Cyclone reaches a maximum speed of 60 miles per hour, carries 24 passengers, and features a track length of 2,640 feet. Other thrill rides include the 125-foot Thunderbolt. Additionally, the park has new kiddie rides that are set to open this year: Circus Candy, Fire Patrol, Rainbowheel, AeroMax, Grand Prix, and Mini Mouse. With a wide mix of thrill, family, and kid's rides, Luna Park is the largest on Coney Island.

Deno's Wonder Wheel Amusement Park is the other main purveyor of attractions on Coney Island. The park is operated by Denos D. Vourderis; here the rides are centered around another Coney Island icon, Deno's Wonder Wheel. At a towering 150-foot height, the 1920 classic was actually built during the 1918 pandemic, and constructed by the Eccentric Ferris Wheel Company, opening for the first time in 1920 on Memorial Day. The attraction features open air gondolas for each group of riders to take in the expansive views of the ocean and all the way to Manhattan. The park is also celebrating the 100th anniversary of the Wonder Wheel by offering a free coloring book for downloads. 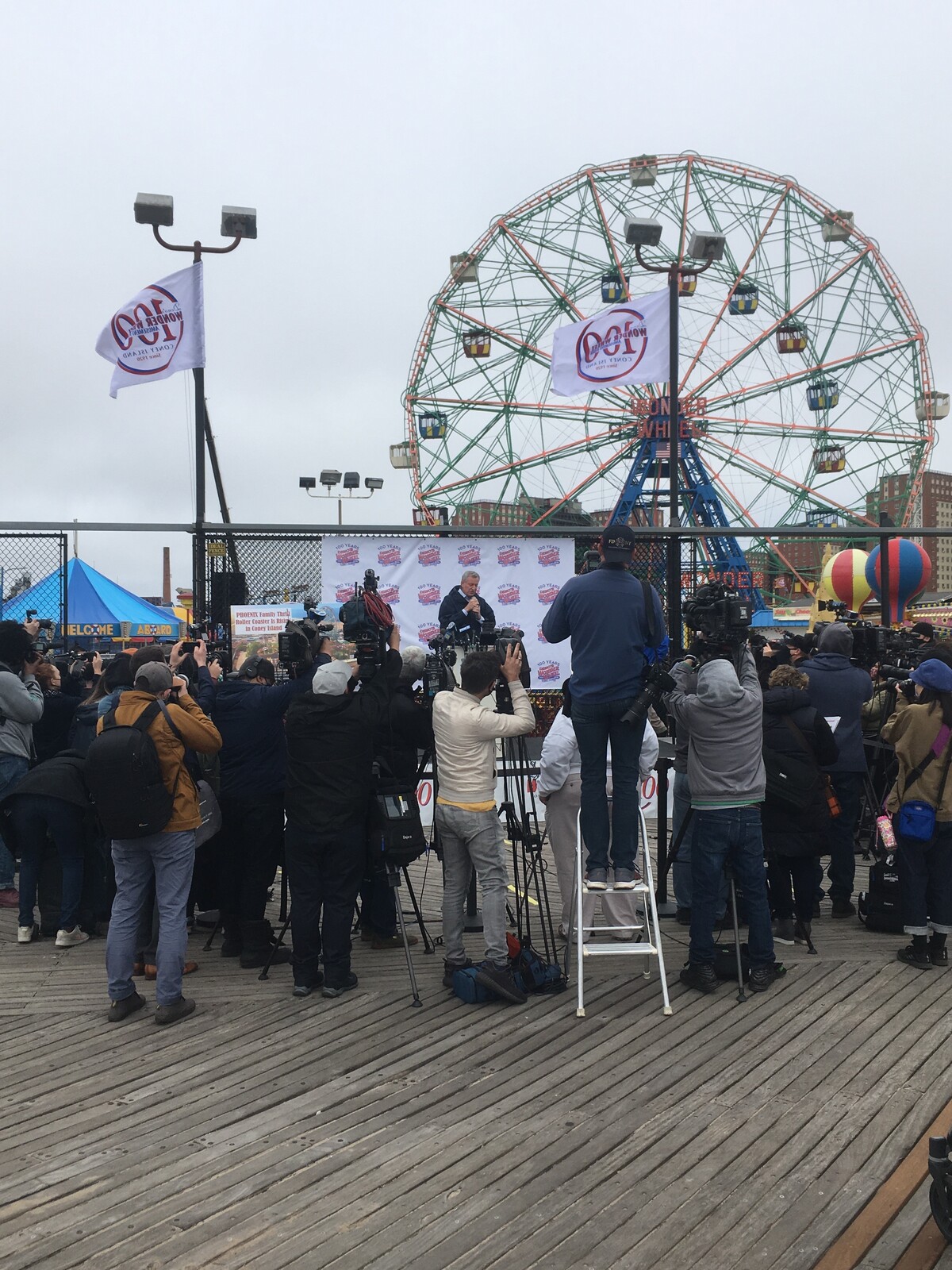 Deno's has 21 rides in all which also includes the hand-painted horses of the popular carousel. The park will soon be opening a new ride, the Phoenix thrill ride. Phoenix is a suspended steel roller coaster, one which Vourderis terms as the largest investment his family has made to date in the park.

The ride's name was selected “because of the symbolism of rising from the ashes…we also plan on having a more accepting and loving world from these ashes,” Vourderis says. The ride is billed by the park as a “Family thrill suspended steel roller coaster taking you 68 feet in the air at 34 miles per hour.”

There are other new attractions here. Deno's is also offering a 7D dark ride titled Stop the Zombies; it utilizes high tech virtual reality features. Speedway is a NASCAR-themed reimagining of the classic Whip ride designed for family fun. And, Friday night fireworks, running from Friday June 26th to September 4th have made a post-COVID return.

Besides the Luna Park and Deno's amusement offerings, other boardwalk attractions include the Eldorado Auto Skooter Bumper Cars & Arcade as well as Brooklyn Go-Kart which also houses a mini golf course.

Luna Park's owner Zamperla termed the park's reopening in late spring as “a day of celebration.” To further encourage safe attendance, in early June, Zamperla donated 10,000 ride wristbands that include a ride on the Cyclone to New Yorkers who have received at least one vaccination shot.

Vourderis, owner of Deno's called the reopening a “great honor…to be able to bring some joy into the life of many New Yorkers.” He added that Coney Island has always been a “place for people to come and remember what it feels like to smile.”

It took 18 long months to reopen after the first-in-a-century shut down. According to Alexandra Silversmith, executive director of the public-private partnership Alliance for Coney Island, which advocates for the community, reports that local business losses over the course of 2020 totaled approximately $100 million. She was optimistic about the reopening, however, which drew an enthusiastic crowd and has continued to do so. “We've been fighting…for almost a year now to reopen, trying to make the case that we are safe to do so."

As of April 9th, both parks were held to 33% capacity to comply with state COVID guidelines; admission capacity has changed with New York state's reopening guidelines. Advance admission wristbands are sold online. Along with providing guest social distancing, attendees are required to wear face coverings, get a temperature check, and provide contact tracing information. Plexiglass partitions are up throughout the parks, and hand sanitizing stations are prevalent.
Luna Park's pre-purchased admission is set by timed entry reservations of four or two-hour blocks depending on wristband type. There are also designated entry portals. Deno's has recently reverted to pre-pandemic admission policies.  Despite the reservation requirements, both parks still offer free admission.

In short, after the long closure, Coney Island is back with rides blazing into the evening hours, and with its return, New York City itself is poised to make a triumphant return as an amusement destination. 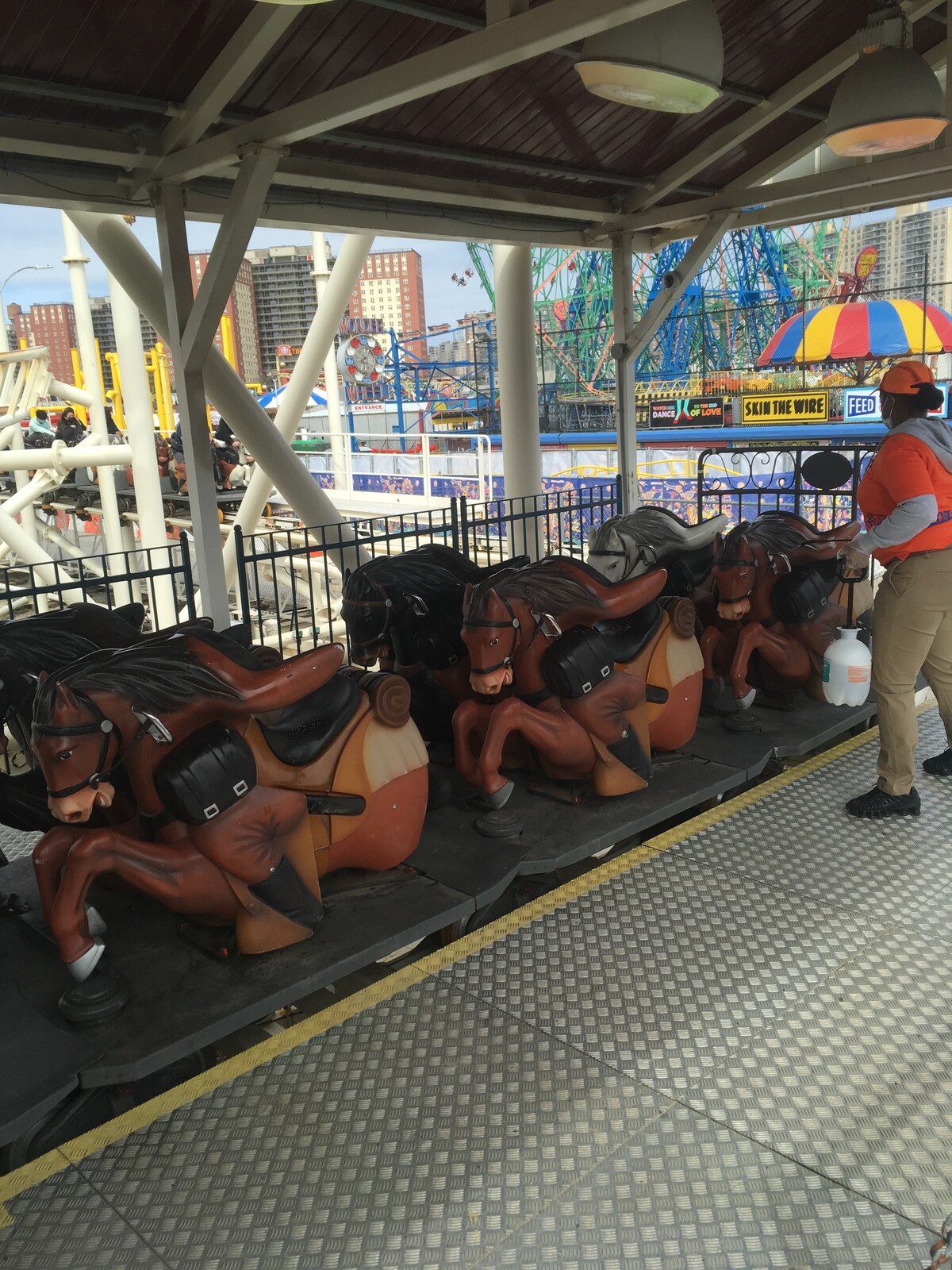 An employee at Luna Park sanitizes seats on the parks coaster 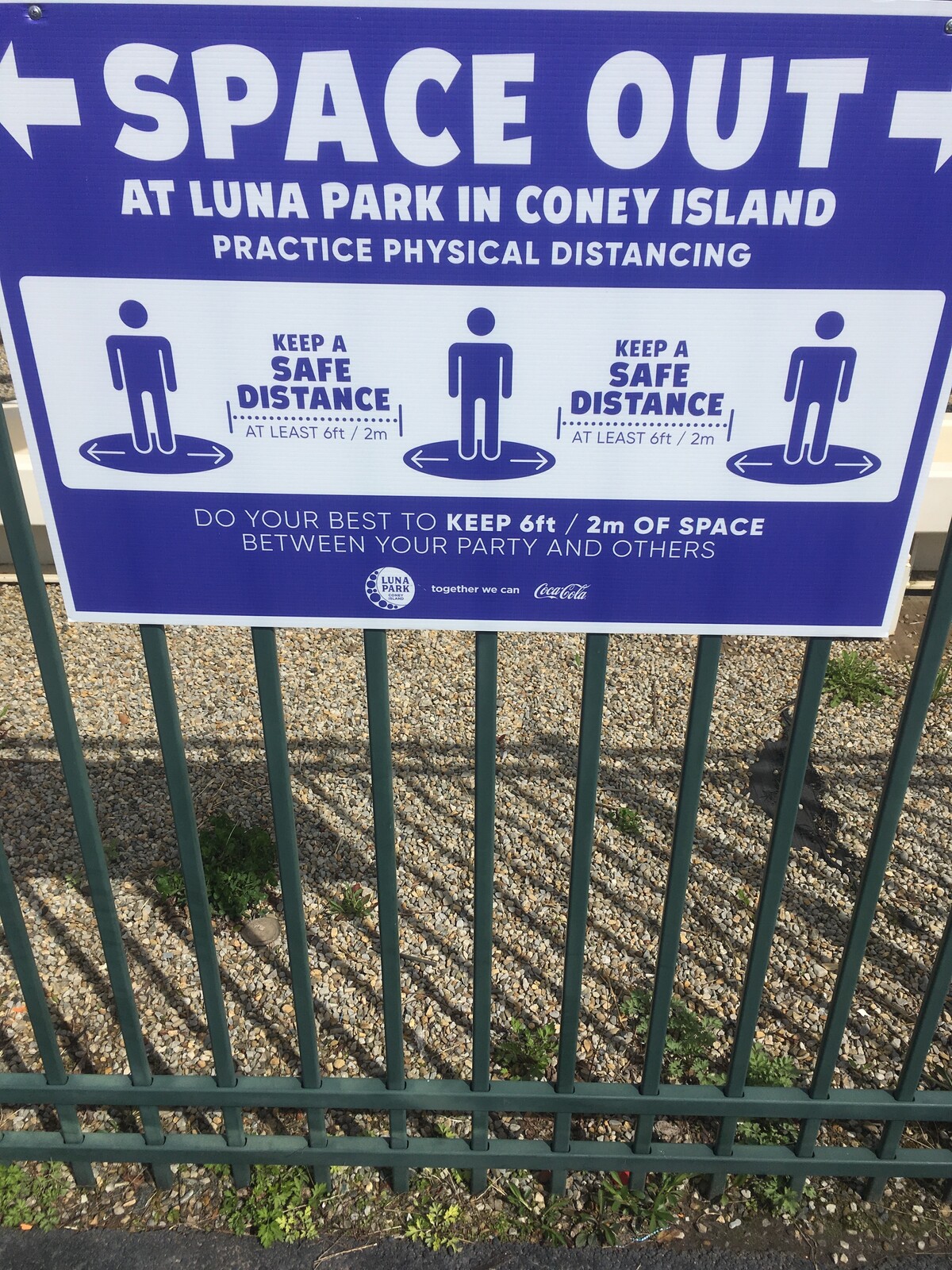 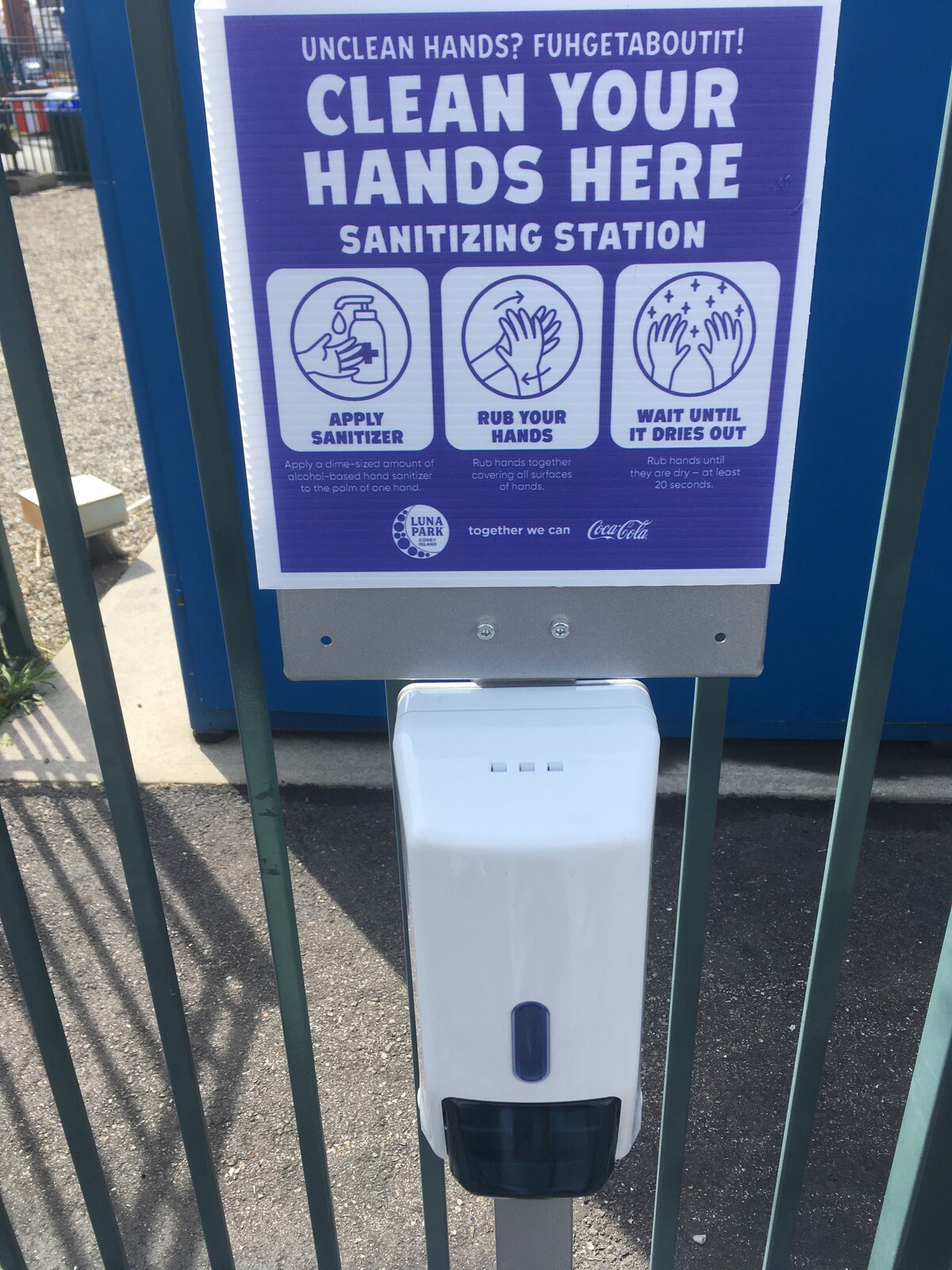 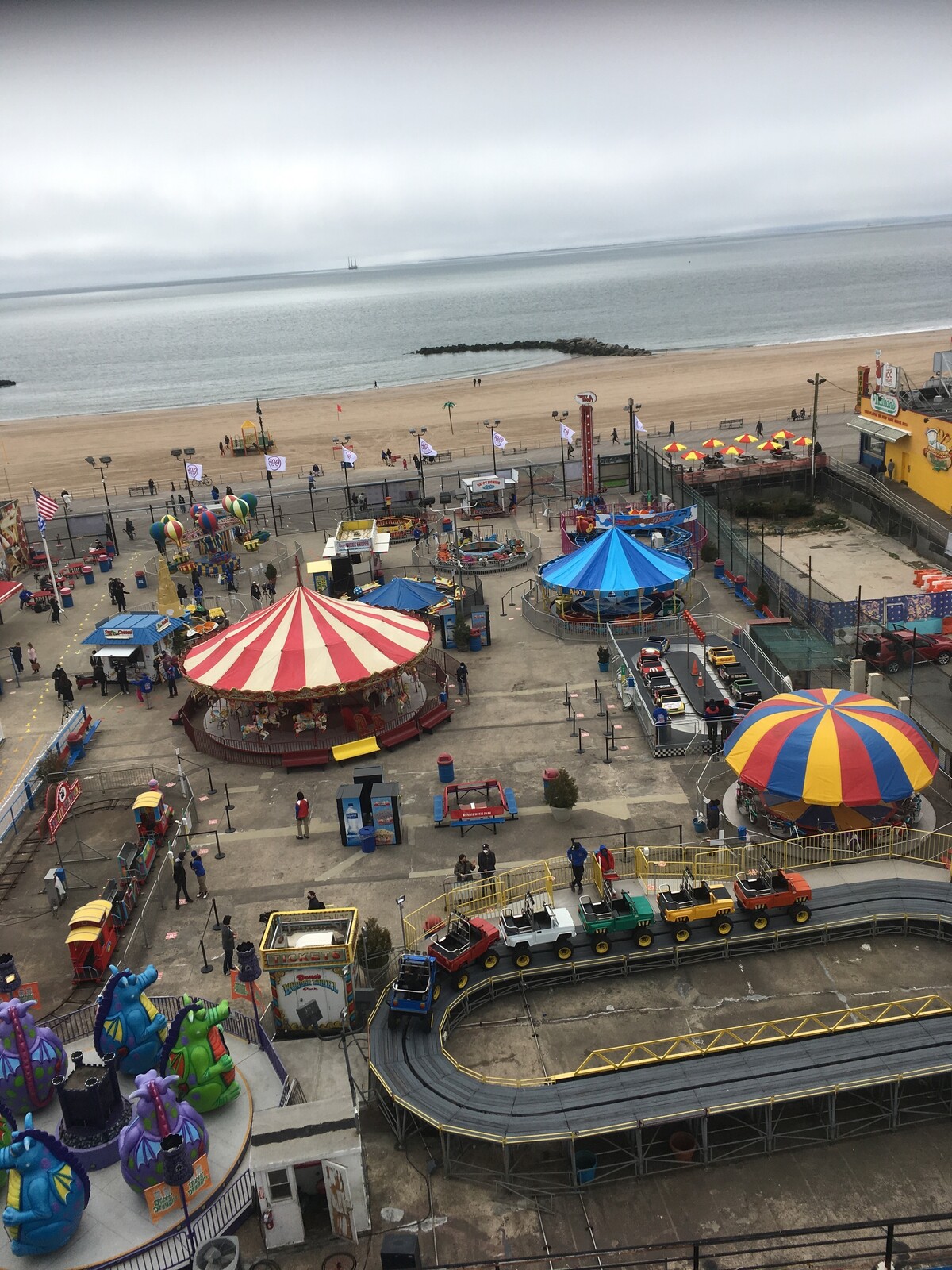 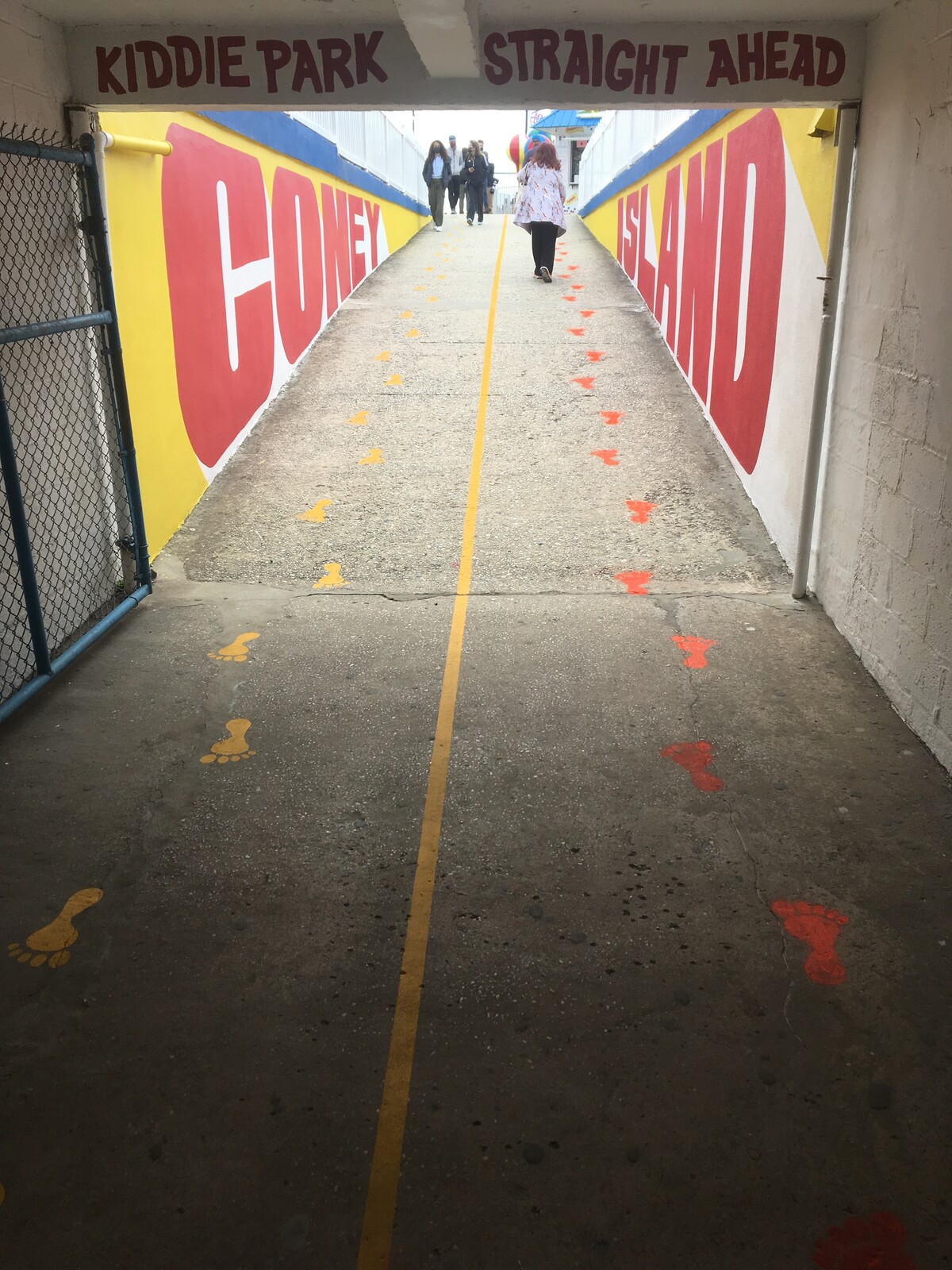 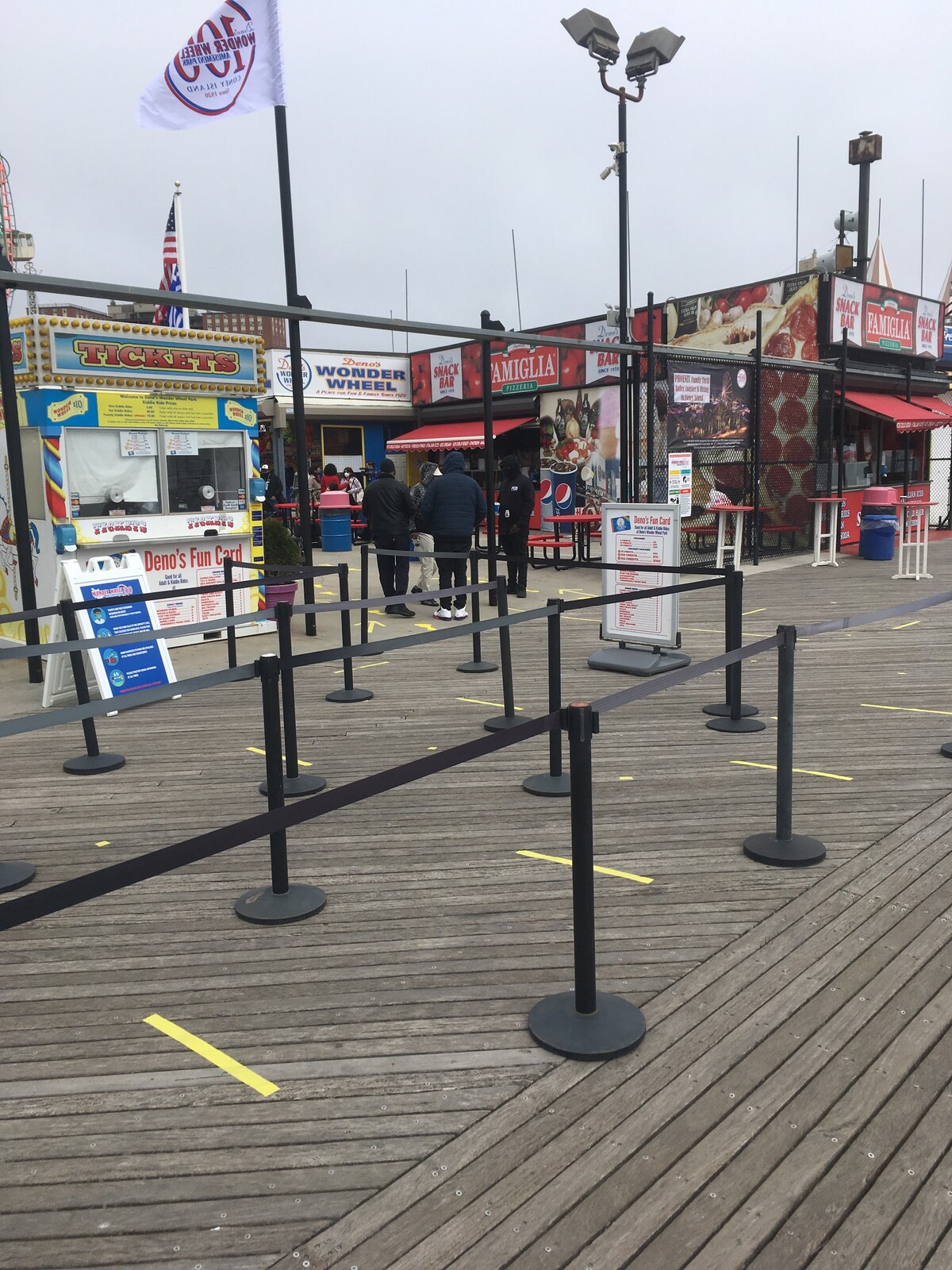 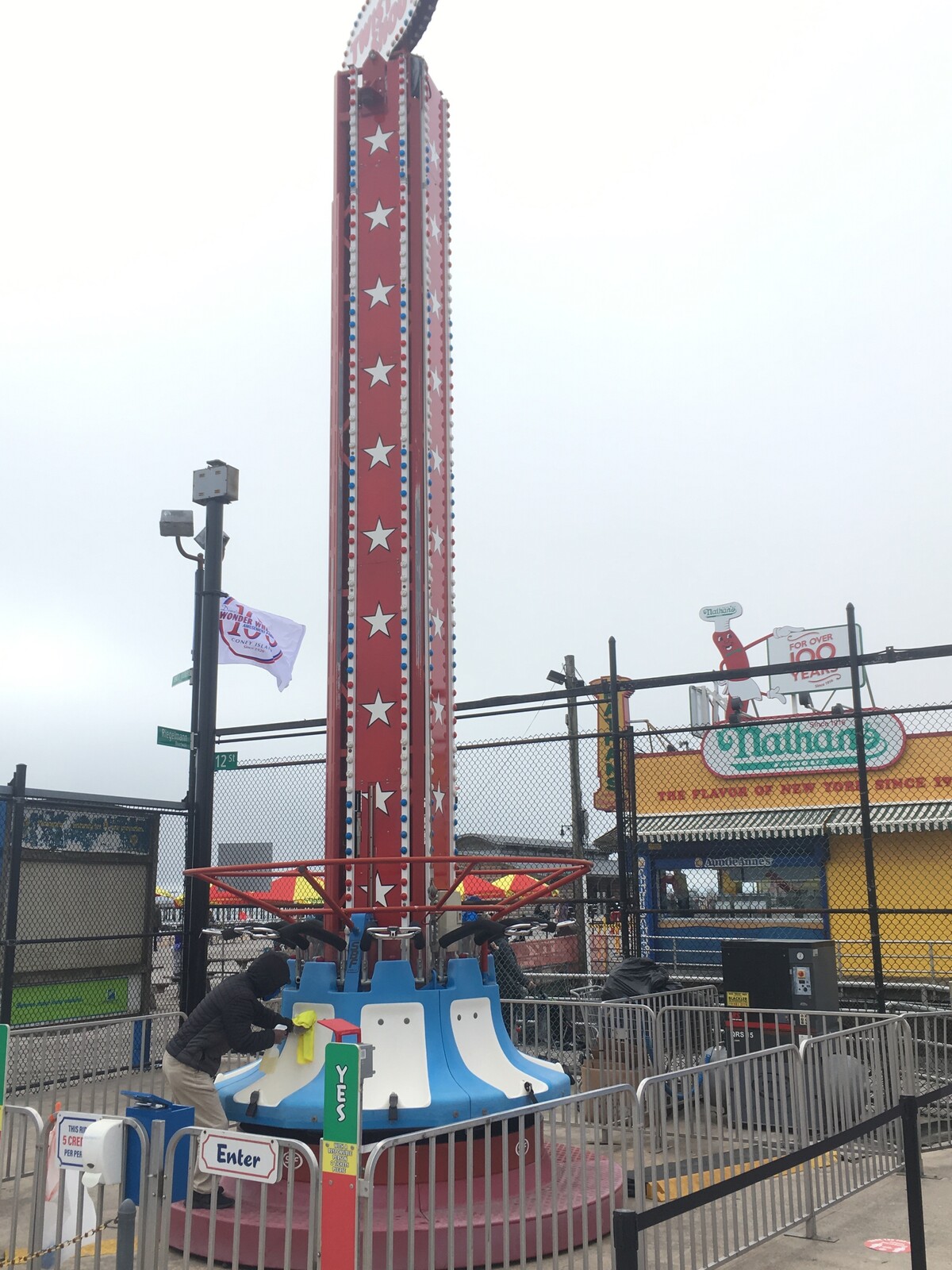