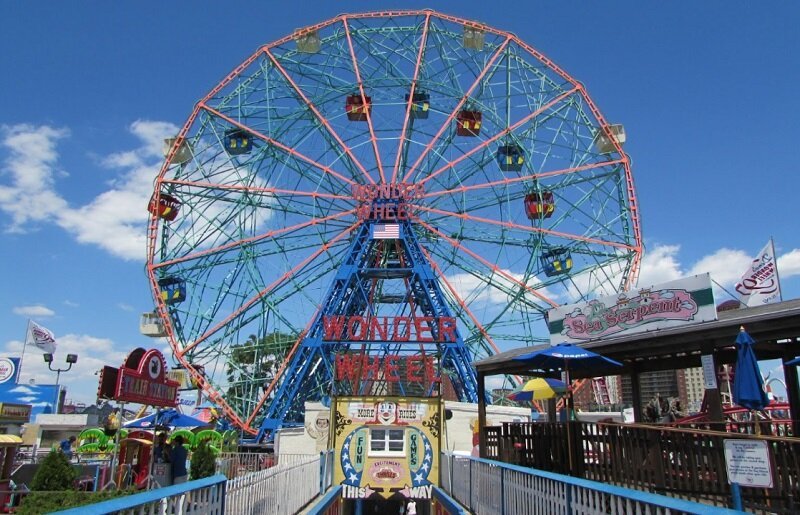 Everything was in place for a boom year for Deno’s Wonder Wheel Amusement Park in Coney Island New York.  The local economy boomed, gentrification and development, reinvestment, gentrification and an influx of new families in the Tri-State region had revived Coney Island for the 21st century. The Coney Island Boardwalk and one its key anchors had seen consecutive years of growth, higher attendance and higher spending.

The summer of 2020 promised another highlight, the centennial of the park’s  Wonder Wheel. One of the most famous Ferris Wheels on the planet –  recently featured in the 2017 Woody Allen movie of the same name –  the Wonder Wheel is iconic, a signature image in any picture of the Coney Island skyline. Ever since Gatsby passed Coney Island driving from West Egg Long Island into Manhattan, the Wonder Wheel has been part of American culture.

One of the largest wheels in the world at the time, the 150’ tall Wonder Wheel was unusual in that only one-third of its 24 cars were stationary, while the other two-thirds rolled on tracks within the wheel itself.

In 1989, the New York City Landmarks Preservation Commission declared the wheel a landmark. While 2012's Hurricane Sandy flooded the entire area, the wheel reopened the next season. But a global pandemic did what an extreme weather event could not. Its 100th birthday party, a three-day bash on Memorial Day Weekend that featured tie-ins with Broadway Shows, and events throughout the summer, was postponed when quarantine measures shuttered all businesses deemed non-essential.

“We were planning the centennial for more than a year, and when we couldn’t open obviously we had to change those plans,” said Dennis Vourderis, who owns and operates the amusement park with his brother Steve. Deno's Wonder Wheel Amusement Park is considered the last family-operated amusement park in Coney Island.

But the birthday celebration of one of the most recognizable pieces of ride equipment in the Northeast, like the opening of the park itself and the restaurants, entertainment centers, souvenir & beach shops and most other businesses, remained closed due to COVID-19.

Vourderis has reinvested more than $40 million in recent years, on new rides, additional food concessions, such as a sweet shot, an updated ticket & computerized debit card system and of course making the wheel birthday ready. “We made several enhancements to our operation.  We bought a piece of property and were able to expand the amusement park.”


The Covid-19 pandemic and lockdown orders has essentially shutdown much of the economy. Unemployment is at near record levels and economists agree that the country has fallen into a recession. Quite a different scenario now than compared to last year, but Vourderis is confident that the industry will recover. “We were booming, we’ve been having record years, business has been great,” he said. “This is a setback, but the industry is resilient. We had huge losses with Hurricane Sandy, but we came back strong.”

Coney Island and its Wonder Wheel has invoked family fun for much of the 20th century, many amusement park and carnival company professionals claim to have their roots in this legendary urban  beachfront destination. But Coney Island seemed to peak, as larger, louder, and newer parks opened in nearby Long Island and the New Jersey Shore, and by the end of the century, the beach had eroded, the boardwalk was in disrepair, and crime was on the rise.

Thanks to governmental support, development opportunities, and private-public partnerships, the area has steadily grown. According to Vourderis, the actual turnaround began in 1994 when the city restored the beach to an environmentally sustainable state. “They replenished the sand, and closed up under the boardwalk. That’s when it all started.”

In 2001, a new stadium MCU Park (formerly KeySpan Park) was built for the Brooklyn Cyclones, a minor league team affiliated with the New York Mets.  Two years ago, the New York Aquarium – which features live shows of whales, walruses and dolphins, opened up a $100 million, 57,500-square-foot pavilion –Ocean Wonder: Sharks!, situated right on the boardwalk.

Deno’s Wonder Wheel Amusement Park and its adjacent park, Luna Park – a facility now housed in the former iconic parks Astroland and Dreamland – are located on the eastern end of the boardwalk, the aquarium, baseball stadium are on or near the western end – Coney Island is one of the largest, family-resorts in the state of New York, a subway ride away for millions.

“Lunar Park and Deno’s Wonder Wheel Amusement Park are the anchors on our end and on the west there’s the aquarium and their new Shark House and the Brooklyn Cyclones,” he said. “There’s been so much more investment in the area, in the city services and in the police and fire departments. The Parks Department is very supportive. The community formed the Coney Island Alliance, and we’ve really made a difference. Everyone’s a stakeholder.”

Vourderis also noted that the changing demographics of New York City and Long Island, with an influx of families in one of the most diverse regions in the country, has also fueled the growth in attendance. “The immigrant families especially, they’ve made a really big difference. We’re very pleased with the new demographics.”


In order for the Wonder Wheel to accept riders, the park of course has to open. “The city inspectors gave us clearance in May, so we can open when the Mayor gives us the go ahead.”

When Amusement Park Warehouse interviewed Vourderis, the Amusement and Recreational areas were part of the Phase IV opening, although the alliance is part of the lobbying effort to move to Phase III. Opening phases were being implemented in two week intervals, and the best case scenario can have the park open by the end of July.

Like parks across the country, Deno’s Wonder Wheel Amusement Park has lost its biggest days of the year – Easter, Memorial Day, and July 4th. “I think the people want to get out and feel the fresh air and sun,” he said. “We will still get the shoulder season, which is after Labor Day. It’s something. I’ll just be happy to be open, all of New York and all of Brooklyn will be happy to be open.”

The park will have to operate on a limited capacity of 50 percent and practice rigorous social distancing and other measures.  “We will be sanitizing constantly, have hand stations at each and every ride. In our eating areas we will have the tables six feet apart, per the CDC guidelines. We will be changing the POS areas and only do transactions by our Fun Card system, and we will only have two entrances and two exists.”

The Deno’s Wonder Wheel Park is an ungated park, but because of capacity issues, park personnel are working on an admission system that would enable attendees to be monitored and attendee traffic flow better controlled. All attendees – as well as employees – would have to be masked. “I see people on the boardwalk not adhering to the rules, walking without masks,” he said. “Some are not practicing social distancing, so it might be problematic and we would have to enforce the rules.”
Vourderis estimates that costs associated with implementing the new coronavirus measures will increase spending by 25 percent. Through May, the park has operated with limited staff, which would typically increase to 120 people, the typical complement for a summer – but because of the extra cleaning and other procedures, he foresees the need for an additional 25 to 30 workers. The workers will all be local, since the J-1 Foreign Student Visa Program was suspended due to the pandemic.

In terms of operating rides under the restrictions of the crisis, Vourderis is most worried about the logistics of the carousel, where social distancing seems a little trickier to problem to solve.

How about for the 100 year old Wonder Wheel? “The Wheel’s the easiest, each car fits six people. We won’t put strangers together, but the cars are 15 feet apart.”