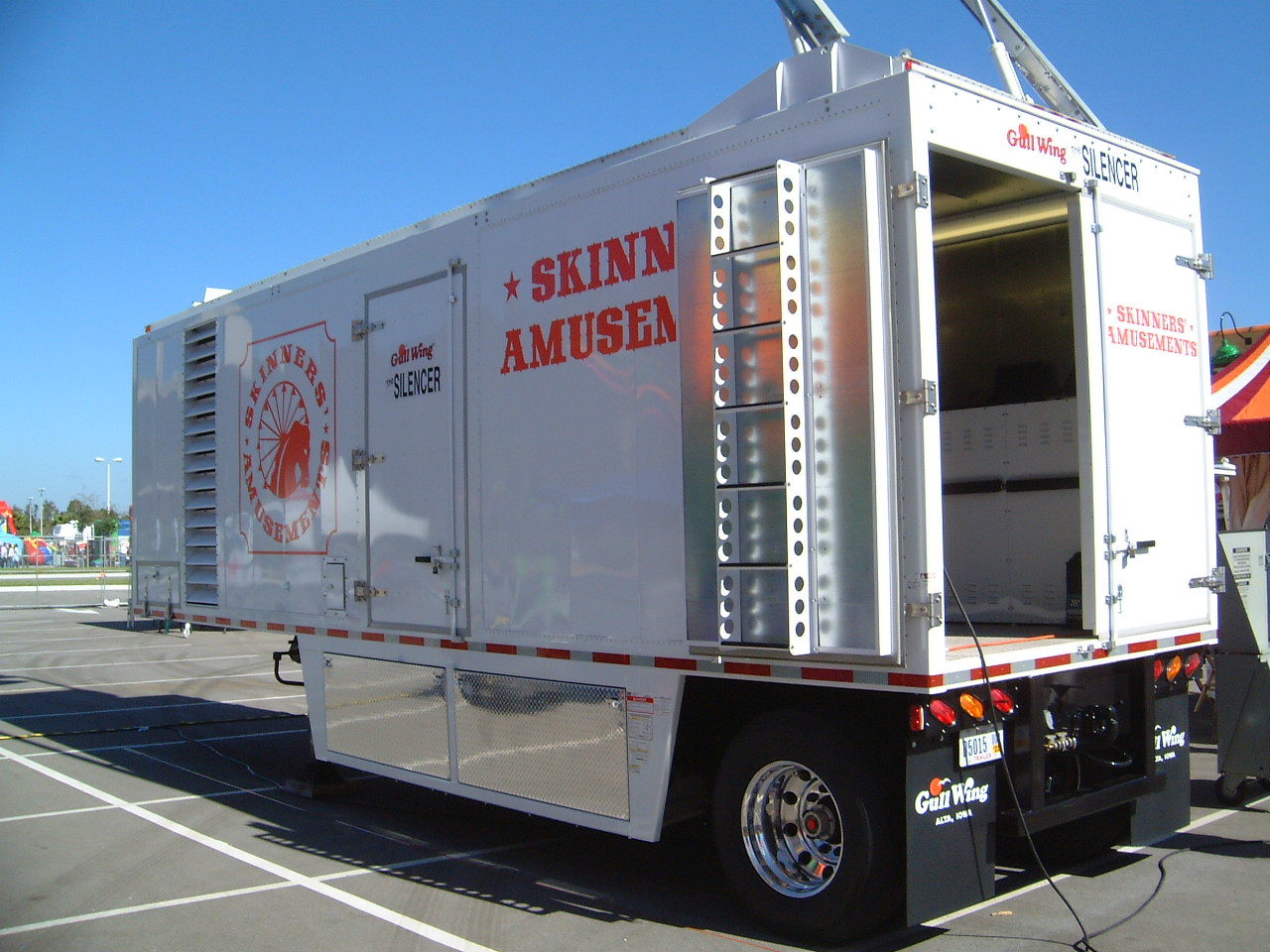 Retirement Comes Early for Gull Wing
Since the early 90s, Gull Wing has built a countless number of generator and electrical distribution units for carnivals nationwide. As pictured, a silencer generator unit was on display at a past IAAPA trade show that was built for Skinner's Amusements.

Gull Wing Industries, whose exclusive line of generators has been favored by scores of carnival companies and midway providers since the early 1990s will soon close up shop, another victim of the Covid-19 Global Pandemic.

By shutting down the economy in general and the fair industry in particular, the coronavirus has taken a toll on business that is just now beginning to be measured. Gull Wing‘s demise may be another grim statistic, but when the news rippled through the fair industry the response was acutely sobering. Gull Wing has been an industry mainstay for decades and is arguably the biggest manufacturer of midway equipment to shut down in 2020.

The short term prospects for the company were no longer financially optimistic. About 70 percent of Gull Wing customers are carnival companies, the rest of their business is a large television production company. The production company has ceased production and cancelled all orders. With the fair industry shut down and carnival companies either still lock-downed at winter quarters or playing truncated routes made up of downsized fairs and still dates, one of the most well-known power distribution equipment brands will no longer be filling new orders or making new products.

“Everyone quit ordering in March,” said Al Wadsley, President & Founder, Gull Wing. “My assumption is that these guys are losing a lot of revenue right now. Who knows when this will end or how much into next year it will go. [Carnival Companies] will want to see a good full season, with good profits, before they will want to see me. It is not worth it to build an inventory that isn't sold.”

A Gull Wing e-blast sent to “all of our customers that have become good friends over the years” read: “This pandemic has taken a 18+ month backlog of work and made it evaporate so we have made the decision to cease operations and as the final job on the floor nears completion we will be laying off our employees.”

By the end of September, the company was down to handful of employees, as the company sells the remaining inventory and closes down the plant, a process expected to take several months. “We will miss our good friends in the carnival business,” said Angie Wadsley office manager. 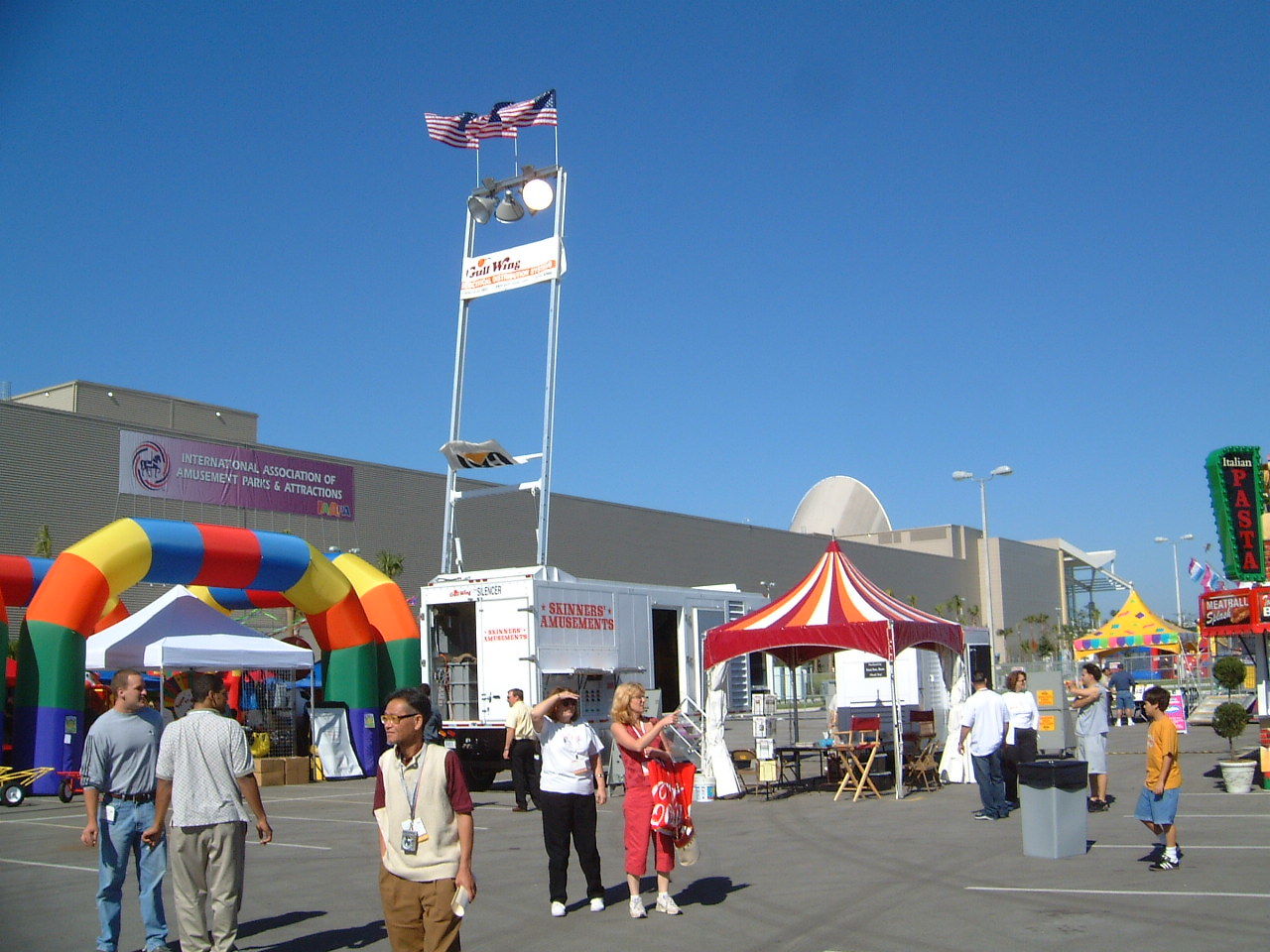 “Gull Wing is a first class company, very loyal and very honest,” said Corky Powers, Powers Great American Midways. “I will miss them at the trade shows. They were very supportive of the Showman's League.”

Powers owns 24 Gull Wing generators and has been a loyal customer since 1993, when he first discovered the company at the annual trade show of the International Independent Showmen's Association. Gull Wing stood out then and soon earned a reputation for quality equipment that was safer, more reliable and more energy efficient that what was on the market at that time.

Al Wadsley was one of the first electrical contractors to design power distribution units, generator trailers and light towers with the midway in mind. And carnival company owners quickly noticed the improvement in this essential piece of the midway puzzle.

“They were the always the Cadillac and when they came out with their light towers and put them on top of their units, they became the Rolls-Royce of generators,” added Powers. “We use multiple generators, and now we can synchronize them so they start up automatically only when we need them. Al and Angie are tuned into what we need.”

Al Wadsley founded the company in 1978. Few companies can boast an image so instantly identifiable with its product. The avian moniker was inspired by the units themselves – “when both lids are opened, they look like a bird flying.”

In 1989 the carnival industry came calling. Wadsley was an Iowa-based electrical contractor specializing in generators when small, local carnival companies asked him to make portable power distribution units. As it turned out, the Gull Wing generators were far superior to anything on the market before and addressed the growing need for safer fairs.

“The industry needed a better job at power distribution,” he said. They were still using bus bars, not fusing the directional leads. There was no over-current protection, no fusers or breakers. They overloaded, caused shortages, and fires. At the time, the states were really stepping up their inspections, and carnival companies were running into a lot of inspectors and they did not like the way things were being done.”

Frank Zaitshik, president, Wade Shows, was one of the early adapters of the Gulf Wing line. “Well into the middle 1980s, we were still using junction boxes connected with apple sticks. I remember meeting Al at Gibtown like it was yesterday. We made the commitment to upgrade our electrical systems, which included distribution panel boxes that looked like a bird when they opened up and with that our business relationship started.”

By the 21st century, Gull Wing's generators implemented more fuel efficiencies, sound dampening technology and more streamlined designs that have become industry standards. The company became known for its parallel generator systems, essentially two-generators – a larger and a smaller one – enabling higher energy efficiency. Instead of running one generator during the entire fair, the system ran smaller generators during low power periods – such as set-up and tear-down – vastly reducing diesel fuel consumption.

“Fuel efficiency became very important to carnival companies, especially when diesel was $4 a gallon,” said Wadsley. “As the systems became more sophisticated, the carnival companies responded. They had had more control over the engines and got more power out of the same amount of diesel.” 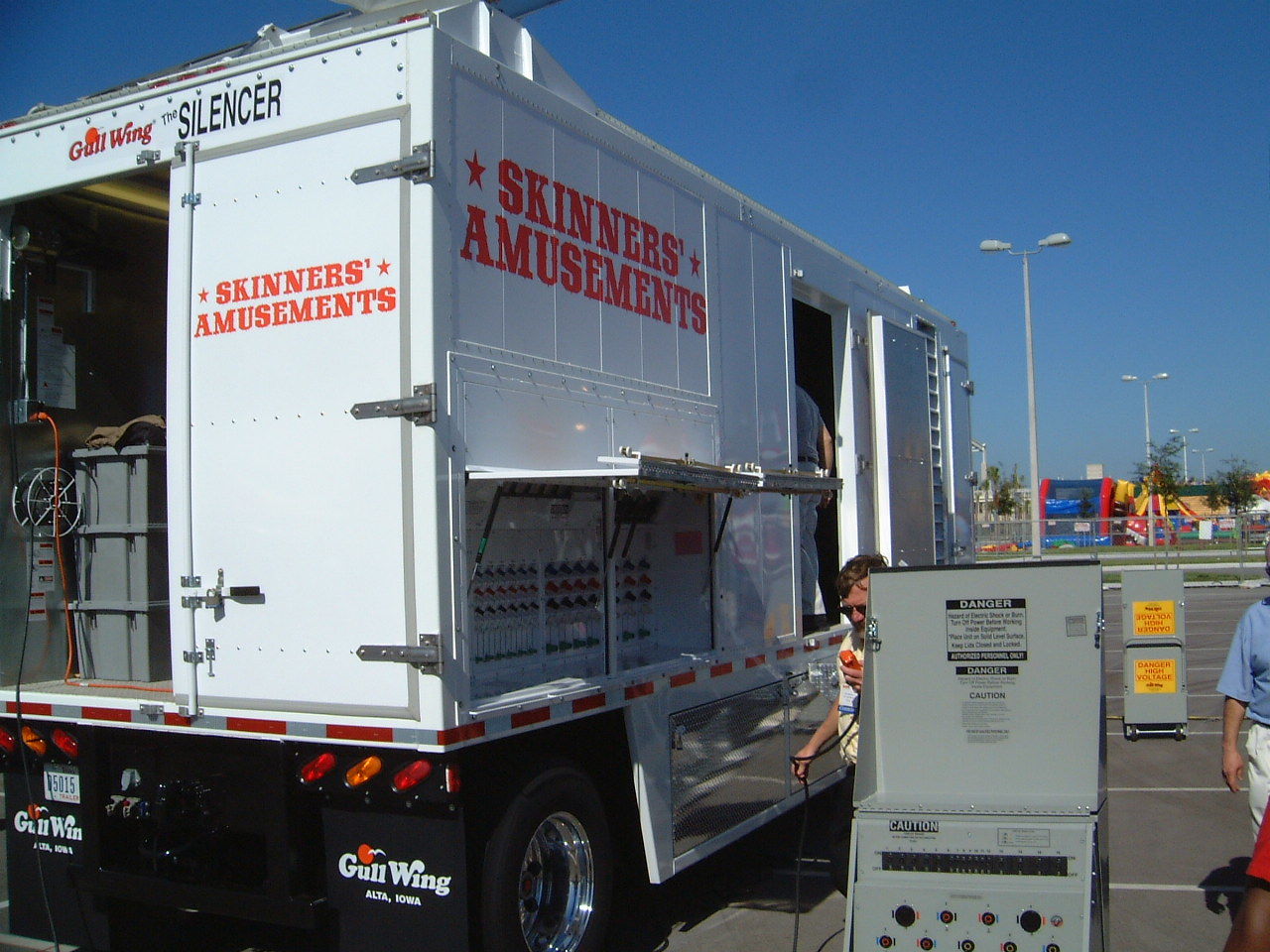 “Our customers evolved with us,” said Angie Wadsley. “With each new product, each new component, the carnival companies welcomed each improvement.  When the G-Flex Unit came out, they really appreciated the compactness. We got more power distribution into a smaller space.”

The most recent trend has been sound reduction. “We're making them quiet, which is a big advantage on the midway,” said Wadsley, who describes the process as more “sound attenuation” than sound suppression. “We control the path of the sound of the generators, and direct the noise upwards rather than sideways.”

Perhaps even more than being known for fair-friendly innovations over the course of more than 30 years, Gull Wing was known for its customer service by outdoor amusement and event industry professionals. Not only could Gull Wing be depended on for its expertise, but for their timely response.

“Al was available any time, day or night,” said Powers. “You do not get that level of support by bigger companies.”

“Al and Angie worked as a team , and I always found them, honest, forthright, and very capable,” said Zaitshik. “They brought a lot of innovations into our industry. I'm sad that they have decided to call it a day, but I certainly understand. We are all wrestling with what we should do. COVID-19 is dominating all our thoughts, personal and business.”

For the founders of Gull Wing, closing was a grave and difficult decision. Even though it may not be on the terms they wanted it, Al and Angie Wadsley are look forward to retirement, especially spending more time with their eight grandchildren.

“There are a lot of good people in the industry,” said Al Wadsley. “We had a lot of fun being in the carnival business.”

Since the early 90s, Gull Wing has built a countless number of generator and electrical distribution units for carnivals nationwide. As pictured, a silencer generator unit was on display at a past IAAPA trade show that was built for Skinner's Amusements.