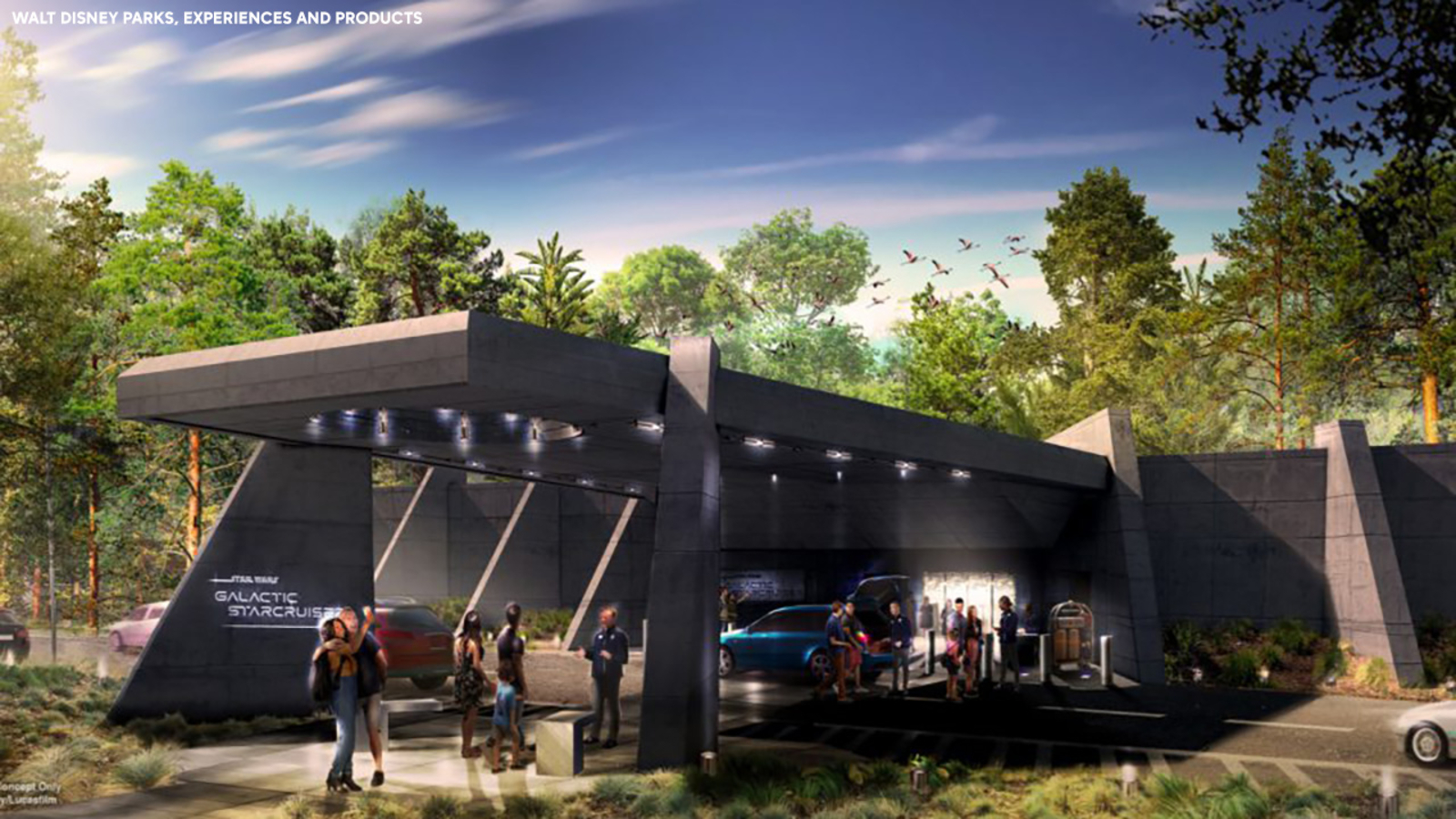 With its long planned new Star Wars hotel opening, the mouse kingdom is definitely coming up with new and out of this world ways to meet pent-up demand for theme park experiences. However, it will cost guests a somewhat other-worldly price for the hotel stay - approximately $6000.

Dubbed Star Wars: Galactic Starcruiser, the hotel experience is scheduled to open in Orlando in 2022. While costs range from $4800 for two to $6000 for a family of four, it does cost less than Jeff Bezos spent launching into space. And included in the cost is the two-night stay in a starship cabin, all food and sodas, valet parking, and entry for guests to Disney's Hollywood Studios.

The price covers a variety of accommodations. Standard “cabins” sleep four to five with a queen bed, two bunk beds, plus a wall pull down bed if you have five “travelers.” Amenities include a mini-fridge, safe, phone, interactive TV and luxury shower products from H20. A Galaxy class suite is a one-bedroom suite with sleeping accommodations for four passengers – a queen bed and two pull down beds. The bathroom has a double vanity, and the suite has two windows, versus one in the standard accommodation. Windows look out into “space.” The Galaxy class suite also has a living space and “extra Star Wars surprises.” There is also a Grand Captain suite with accommodations for up to eight in two queen beds, two berths, and two wall pull-down beds. It will include a second bathroom, have three windows, a few extra surprises, and a “posh living space.” 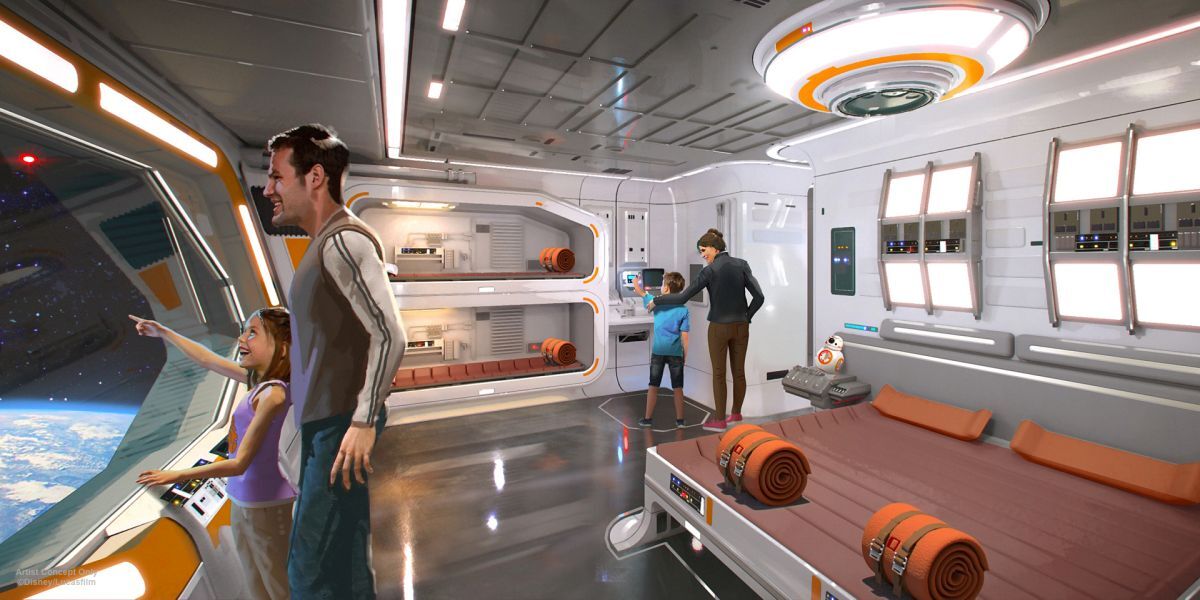 Regardless of which type of accommodation is chosen, it comes at a high cost for a two-night experience. The price does include food however:  breakfast, lunch and dinner, including gratuity on board the “ship” for dinner, and one quick meal service at Hollywood Studios are all included.

The on-board adventure will take both kids and adults in Luke's footsteps, training to use the lightsaber if age seven and up. They can also explore the ship's mechanics, visit the Bridge, and control the systems onboard. Secret crew meeting spots can also be found as well as a relaxing onboard visit at the Sublight Lounge.

There's also an “off ship” excursion to the planet of Batuu via a visit to inside Star Wars: Galaxy's Edge in the theme park itself. While onboard, other activities include droid race competitions, Sabacc card playing lessons, and special musical performances at a supper club.

Full meals are served in the Crown of Corellia Dining Room. Corellia is a Star Wars-universe planet with shipyards famous in part as the origin of both the Millennium Falcon and Halcyon. The dining spot will serve all three meals, with dinner described as having a “lavish multicourse menu of both otherworldly and familiar origins.” Marking the final onboard evening, there will be a gala celebration that allows guests to dress in full costumes and Star Wars apparel. The apparel items can be ordered in advance both “onboard” or at shopDisney.

The immersive experience begins with an arrival at the Walt Disney World Resort terminal, where guests board a launch pod and head off to the Halcyon starcruiser for their stay. As each of the 100 cabins and suites include “space” views, guests will view stars, planets, and other spaceships floating past. The themed environment includes elements of role-playing and the theatrical, as well as utilizing cutting-edge technology to transport guests to that galaxy far, far away.

Naturally, part of the adventure will include interactions with Star Wars characters, and experiences using a “Datapad” on their own mobile devices during their stay onboard. 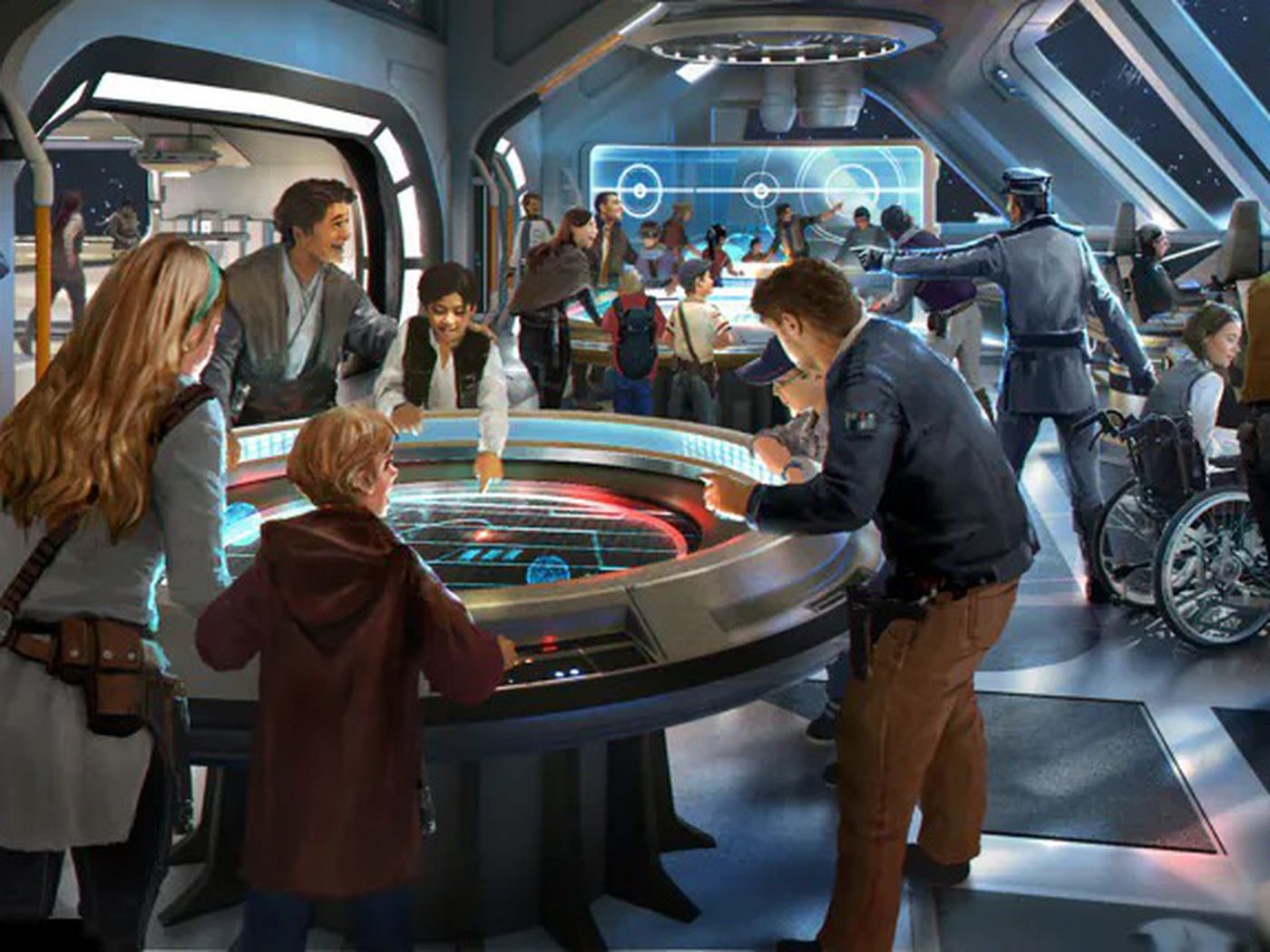 Every guest can select their own challenges and missions. They can choose to do anything from following the First Order to joining with the Resistance or just watching the action play out. The choice of interactive experiences allows repeat visits to be unique. The focus of the stay and its many adventures is to make guests feel as if they are a character within the Star Wars universe. With just 100 “cabins” it should be a relatively intimate experience that will allow guests to have full use of all the interactive elements.

It is projected to be both a one of a kind and first of a kind experience for guests, according to Disney Live Entertainment executive creative director Wendy Anderson. “Each person has a role to play…each person has a reason to be on board that ship.” She adds that “The ways you access it are so organic that you don't always know that you're playing a game in the strictest sense. There are so many storylines, so many options.”

The first available “voyages” on the Galactic Starcruiser should launch in spring of 2022, with Disney offering more information about the stay and the attraction itself, as well as reservation access, closer to launch date.