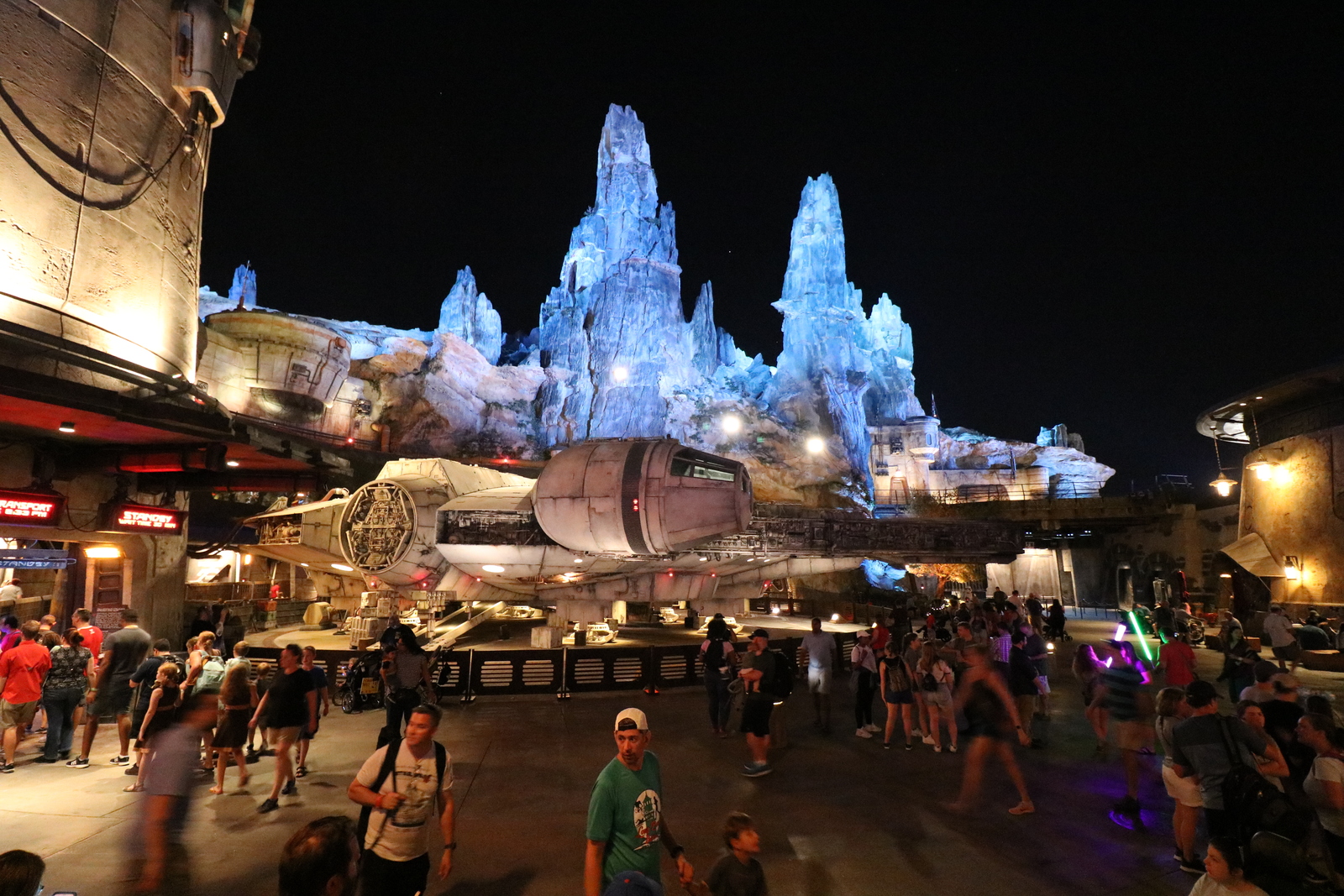 There’s a bevy of additions to Disneyland and Disney Orlando for 2020, from an iconic mouse’s railway to an upcoming out-of-this-world guest stay and a major new attraction coming to Galaxy’s Edge in Anaheim.

On the west coast, the biggest news is arguably the January 17th opening of Star Wars: Rise of the Resistance, which will place guests aboard a full-size transport shuttle before they are captured by a Star Destroyer and placed in the middle of a battle between the dark side of the First Order and the light side of the Resistance. As with its counterpart ride in Florida, the Disneyland attraction will utilize an app-based boarding process to avoid long wait times for the ride that includes interactions with beloved final-trilogy characters BB-8 and Rey.

Moving onto the more prosaic, two special after-hours ticketed events take place at Disneyland and two at California Adventure this year, including a Pixar Night on March 5th at California Adventure, and a Disneyland Valentine’s Day event on the 12th and 13th. Come February 25th, it’s Mardi Gras that’s the excuse for some partying, as Disneyland’s New Orleans Square celebrates with beads, masks, and foods that are iconic to the Mardi Gras festivities.

Guests who are in need of refreshment after the celebrating can head, in the Spring, to the new Tenaya Stone Spa at Disney’s Grand Californian Hotel and Spa, for facials, massages, and more, starting in the spring.

Summer months bring more sparkle as Disneyland celebrates the 4th of July with Disney’s Celebrate America! A Fourth of July Concert in the Sky, which can only mean fireworks. Special food offerings and holiday decorations will also be in store. July 17th brings a different celebration: Disneyland’s 65th Anniversary of a wide range of attractions including attractions such as Autopia, Jungle Cruise, Disneyland Railroad, Mark Twain Riverboat, The Golden Horseshoe, King Arthur Carrousel, Mad Tea Party, Toad’s Wild Ride, Peter Pan’s Flight and Snow White’s Scary Adventures. Snow White and King Arthur’s Carousel will also be celebrating their refurbishment, taking place in January and February of 2020.
Fall and winter brings its own set of special events, such as the Asian Street Eats from Chef Hung Huynh, a new concept from Earl Enterprises. This will be a take-out spot with trendy Asian dishes to be located in Downtown Disney’s west end. Within the park, the Oogie Boogie Bash Halloween Party runs in September and October at Disney California Adventure, a separately ticketed event running on select nights. In Disneyland, Halloween Time will bring its Halloween attired character costumes and hundreds of carved pumpkins; the Christmas holidays, which encompasses November through early January of 2021 will include seasonal themed fireworks, a parade, and Sleeping Beauty’s Winter Castle.
At Disneyworld in Florida, the big news for this year is all about Mickey Mouse – and Minnie, in a first of its kind ride for the mouse couple. The attraction is based on the recent Mickey Mouse Cartoon Shorts. A picnic trip in Mickey and Minnie’s sporty roadster is sent on a twist with riders boarding Engineer Goofy’ srunaway  train. It is the first ride at any resort that features Mickey and his friends. The lively family fun ride will be making an appearance at Disneyland in 2021.

Then comes the out-of-this-galaxy news, with a new hotel/immersive experience: a Star Wars-themed luxury resort now under construction. The hotel promises more than a stay, with guests interacting with the characters as passengers board the Halcyon, a starship in the Star Wars universe. They become part of the story, interact with characters, board and disembark together as a part of a two-night, three-day stay at Star Wars: Galactic Starcruiser. The premise is that guests will leave Earth and board a starship to voyage the galaxy. Each guest will live in a way that reflects that universe, including dressing in Star Wars-themed clothing, which ostensibly would be provided. Every window in the hotel will have a view that appears to be from space. This project is to be completely immersive, meaning guests are considered characters in a plot and are invited to act those roles during their time at the hotel.

Travel to the Halcyon will take place from a Launch Pod, where guests will take  a hyperspace route to the hotel/ship. However, in the real world, each “launch pod” will be a heavily modified bus with an unseen driver that will depart from a blue-print documented “shuttle launch” parking area. Then, once arriving at the hotel, guests enter the Halcyon via airlock and step into the main deck atrium. The Halcyon will also make a “stop” on the Black Spire Outpost on Batuu – the Star Wars Galaxy’s Edge attraction located at Hollywood Studios.

During the stay, guests will also be trained to use a lightsaber successfully, visit the ship’s bridge, look at putatively secret spaces within the ship, and to a certain extent choose their own adventure that then controls additional experiences during the guests’ stay.

Initial blueprints show the first floor of the hotel having 34 “cabins”, with two of these being labeled as “First Class.” Those cabins will be twice the size of a standard room. If speculation online is correct, the hotel will be two stories, making only 68 rooms available for the top of the line, as well as out of this world, experience. 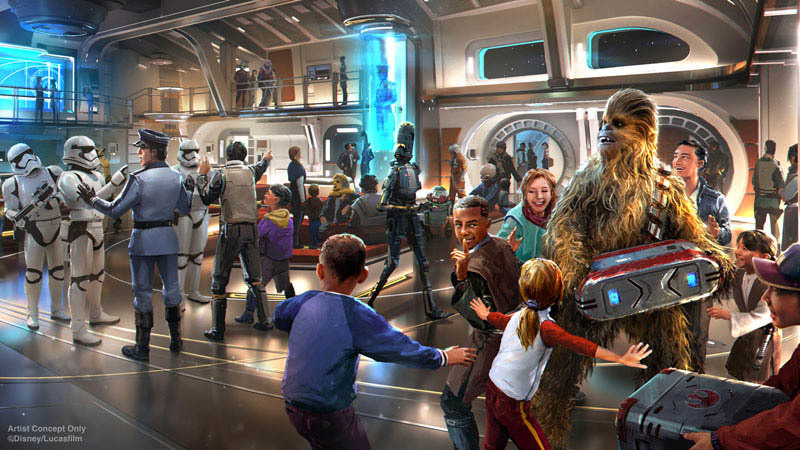 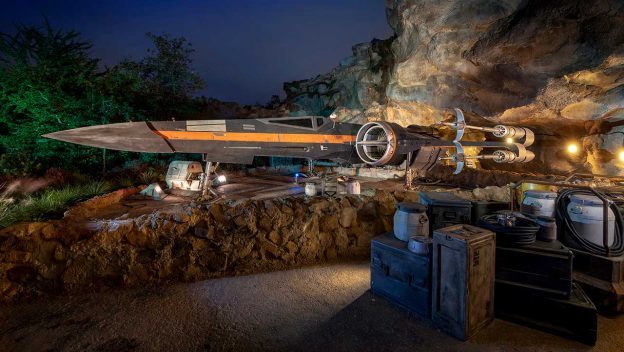 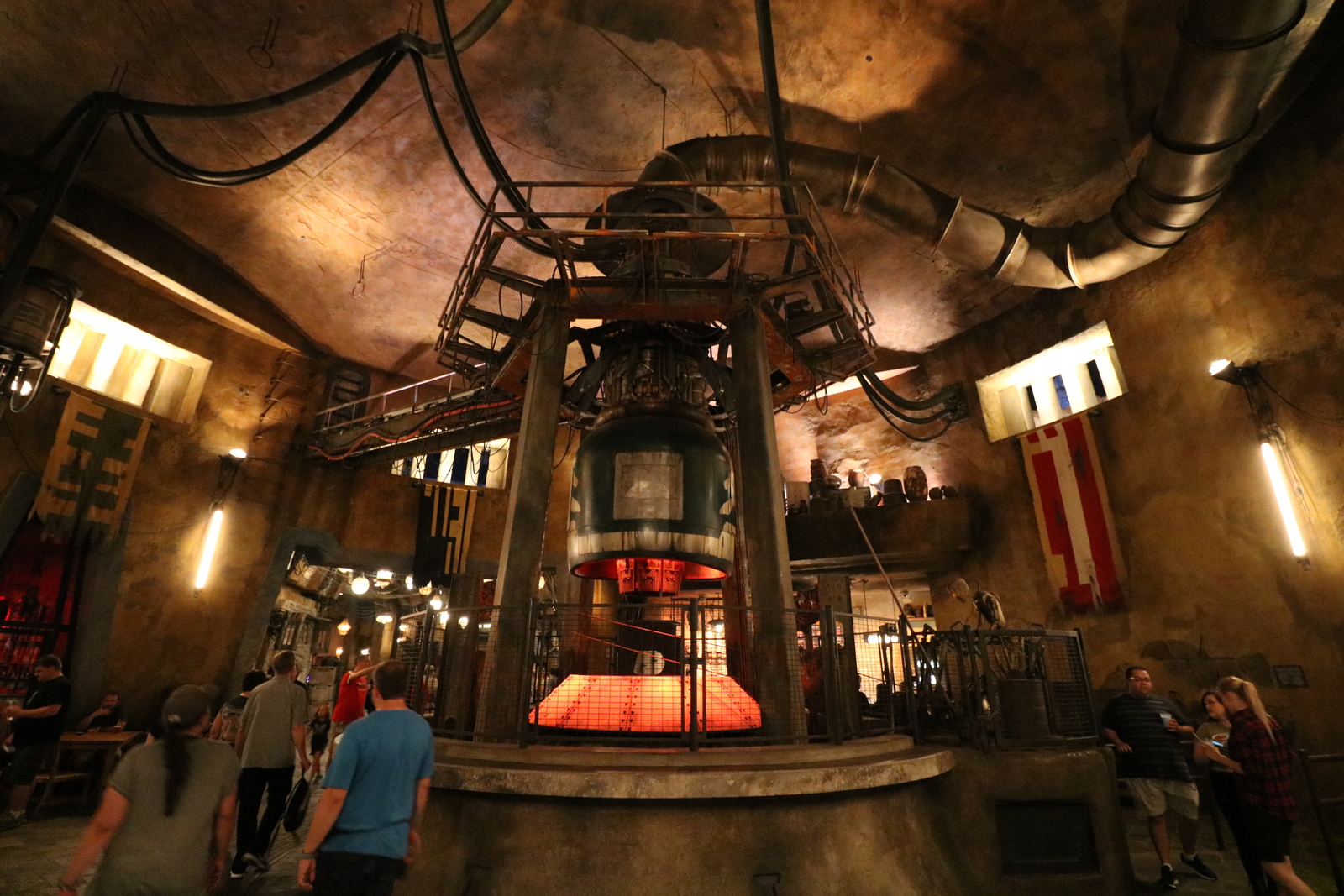