Florida Theme Parks Permitted To, But Have Not Increased Capacity Yet
Theme Parks Across the Country Host Scaled Back Halloween Events 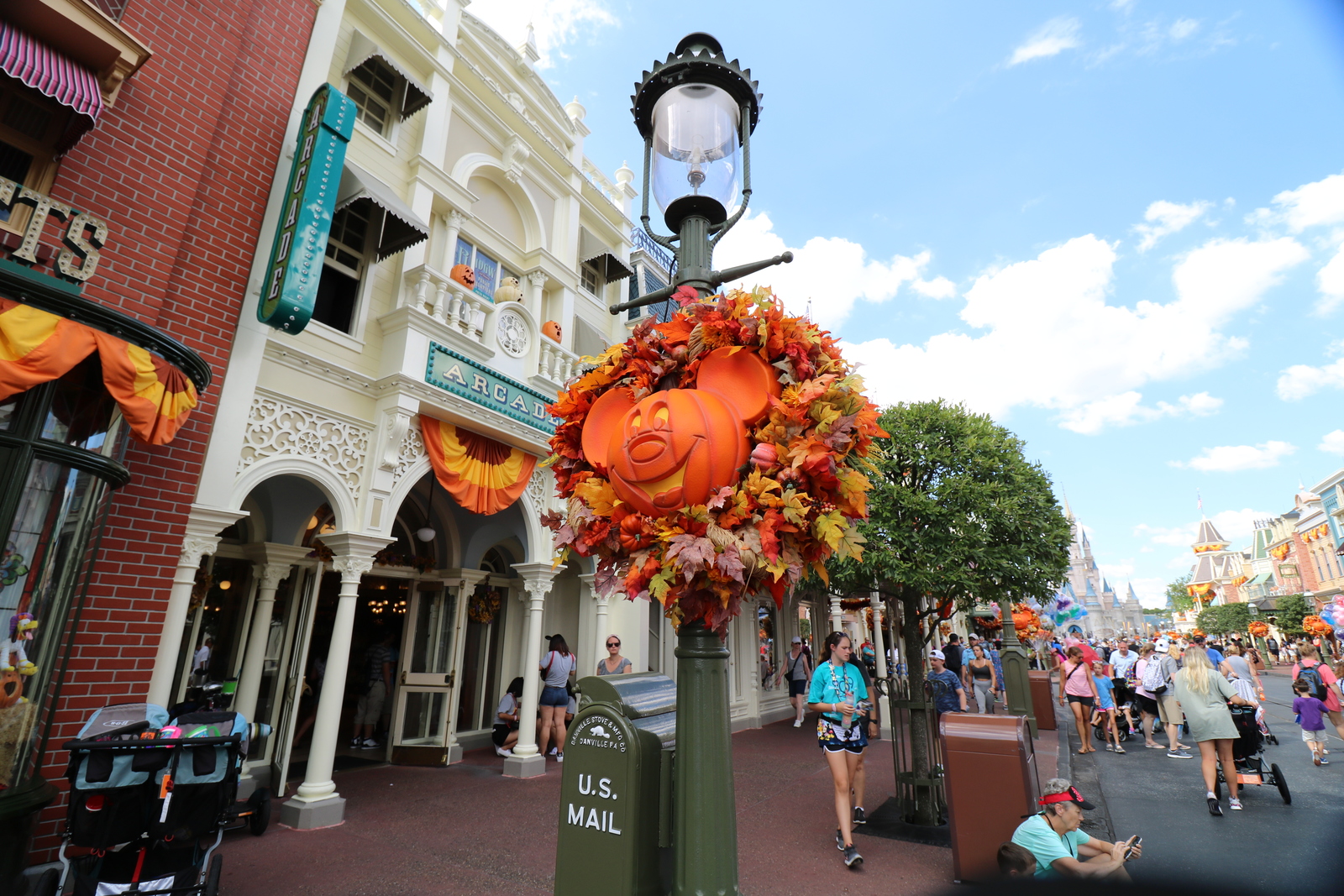 The Magic Kingdom scales back Halloween
The park boasted its signature Mickey Pumpkin wreaths on Main St., however, the amount of decorations was significantly scaled back compared to previous years due to the cancelation of Mickey's Not So Scary Halloween Party.

Phase 3 of reopening in Florida means theme parks can increase capacity as long as social distancing protocols are maintained. Walt Disney World, Universal Orlando, and others can, according to the Florida governor, not only increase capacity but not enforce face coverings. That said, theme parks appear to be taking a more proactive and protective stance toward attendees than the state's governor. The park is continuing to focus on in-state visitors rather than travelers; and plans to adhere to Covid-19 safety protocols for the rest of the year. This includes canceling events such as the Mickey's Not So Scary Halloween Party and Very Merry Christmas Party at Magic Kingdom, and cancelling the Candlelight Processional at EPCOT. While the park did send out a guest survey that included questions about capacity limits at the park, and from a financial standpoint, it hopes to open for additional guests, at the moment, nothing is planned to change.

While Disney World is making no changes in the immediate time; Disneyland in Anaheim, Calif., is hoping to make one big change: reopening.

At Universal Orlando, while no Halloween Horror Nights events are taking place, there are two new haunted houses, and with that attraction part of the park's allure, the resort hit their limited capacity maximum the weekend of September 19th. The haunted houses are open October 3 through November 1. The attractions are Universal Monsters: The Bride of Frankenstein Lives and a haunt called Revenge of the Tooth Fairy. Both of the haunted houses are using digital queues. The scareactors cannot practice their jump scares: they are physically separated from visitors to the park for health safety. They are only open during daylight hours: the park continues to close at dark. 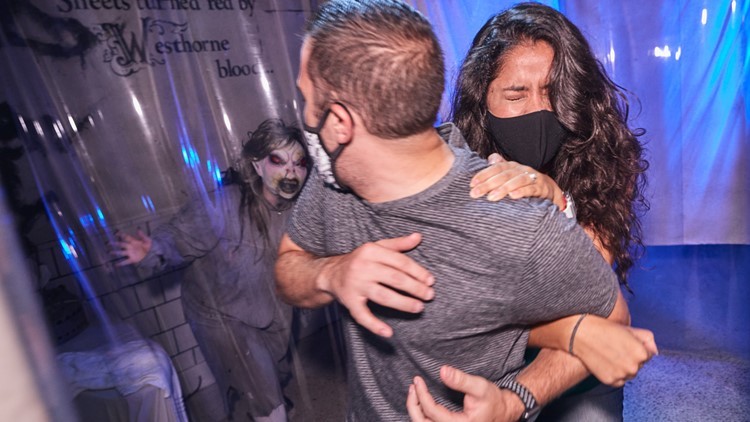 Revenge of the Tooth Fair at Universal Orlando

Both feature the signature quality theming of a standard Halloween Horror Nights attraction. Revenge of the Tooth Fairy is about evil fairies that take revenge on a child and his family when the child doesn't want to give up his lost-teeth. Guests walk through a maze that looks initially like illustrations from a pop-up black and white picture book. The maze gradually goes to color, with evil fairies popping out at every turn. The Bride of Frankenstein attraction leads guests past a bride grief stricken at her monster being dead, and harvesting the blood of the brides of Dracula to try to bring him back to life. Visitors are immersed in the ongoing battle to do so. Other Universal classic monsters make an appearance throughout the attraction.

Universal Orlando guests are also allowed to wear family-friendly Halloween costumes this year while visiting the park; at the park's Islands of Adventure, younger visitors can even trick or treat for candy at retail spots. Universal Studios is offering a scavenger hunt called the Scarecrow Stalk, that allows participants to find scarecrows and collect stamps at retail spots. Those who complete the “stalk” receive a Halloween treat.

While most theme parks have quashed Halloween events altogether, some Six Flags locations; Six Flags Great Adventure, Six Flags Fiesta Texas and Six Flags St. Louis have not. At these locations, what was once Fright Fest has become Hallowfest. During daylight hours, family-friendly trick or treat areas, costumed performers clad in non-scary attire, and live entertainment takes place; after dark, socially distanced scare zones and scarier masked monsters are loose in the park. There are no indoor attractions, and Scareactors must remain six feet from park guests.

Also in California, SeaWorld San Diego offers its Halloween Spooktacular, with a family-friendly series of shows and themed attraction. The event runs Fridays through Sundays until November 1st and features a socially distanced  trick or treating Spooktacular Trail to the Candy Garden. There kids will find treats delivered through the a candy chute. And the event will also include  a Sesame Street Halloween Dance Party, as well as a Pumpkin Scavenger Hunt and an outdoor Monster Mash DJ Dance Party. For an additional fee, SeaWorld will hold a Cookie Decorating event with Cookie Monster and Elmo. And there will be fall food favorites such as a pumpkin cheesecake. 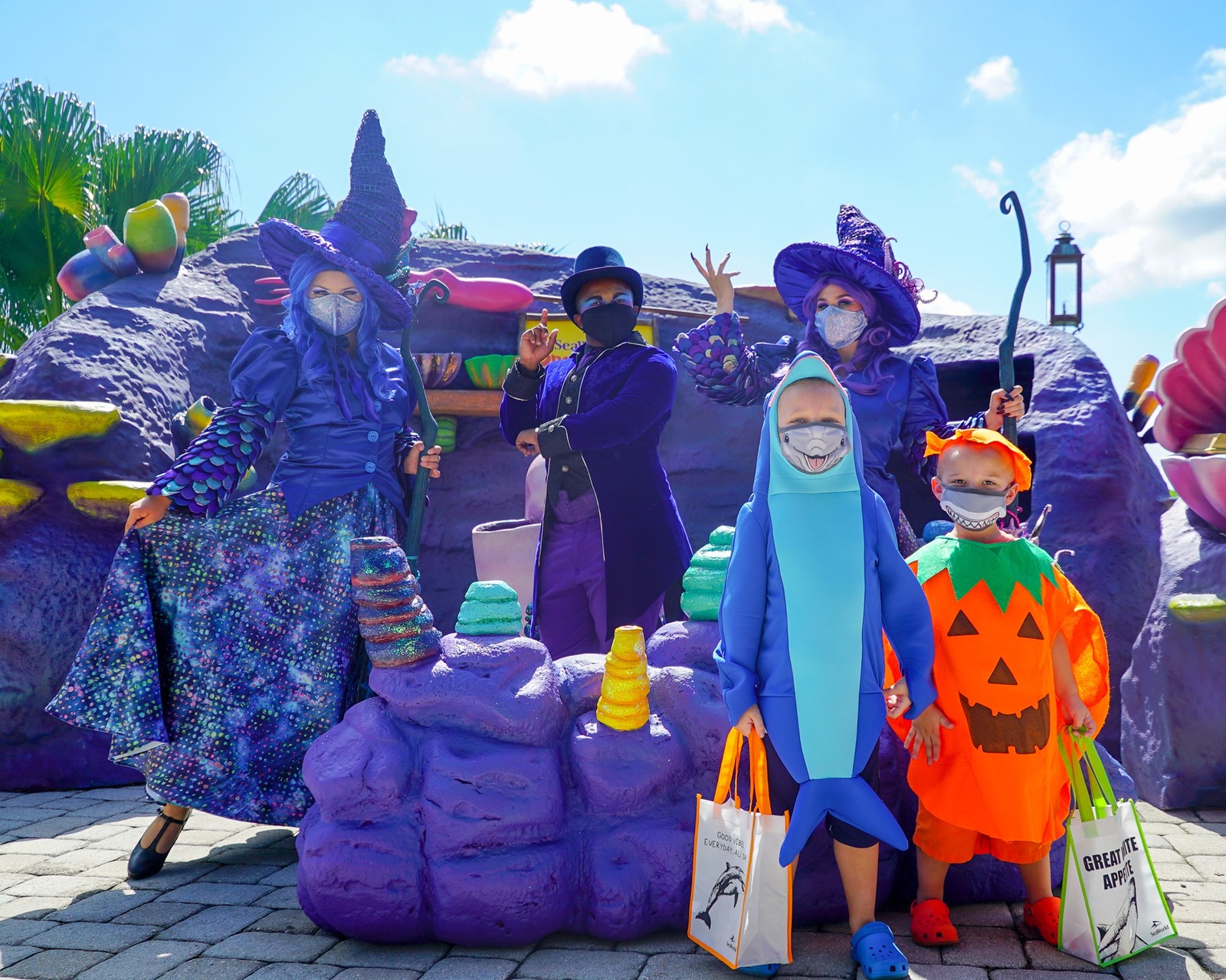 While no rides will be open, the dolphin, sea lion and whale shows will be offered with seating that is socially distant, and outdoors. Event admission is required; to encourage attendance, the park offers a child's admission for free with every full-price adult admission. The event is free for Annual Pass and Fun Card guests; otherwise tickets start at $73.99 for adults.

The Magic Kingdom scales back Halloween

The park boasted its signature Mickey Pumpkin wreaths on Main St., however, the amount of decorations was significantly scaled back compared to previous years due to the cancelation of Mickey's Not So Scary Halloween Party.

Revenge of the Tooth Fairy Haunted House at Universal Orlando