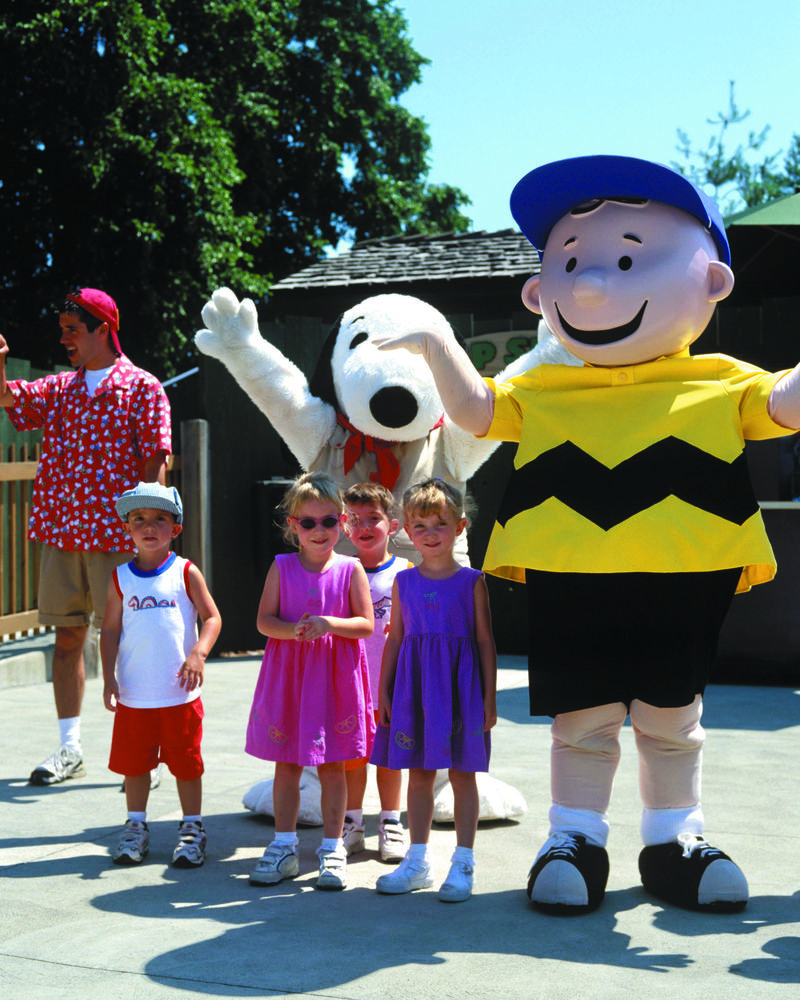 Theme parks and other attractions everywhere are having a field day with iconic Charles Schulz characters such as Charlie Brown and Snoopy. In short: Peanuts characters are a big hit with parents and kids as meet and greet characters, theme-park rides, the focus of holiday shows, and more.

It’s been almost seven decades since Charlie Brown and his gang first appeared in print in 1950. That the characters are still sweetly relevant can be found at Cedar Fair amusement parks such as Knott’s Berry Farm, international parks from Universal Studios, arboretums, special holiday events, and even at NASA.

Buena Park, CA’s Knott’s Berry Farm began the theme park attractions featuring Charlie Brown and company. A part of the Cedar Fair umbrella, Knott’s was the first but not the last Cedar Fair park featuring Camp Snoopy and Planet Snoopy themed areas. The characters make up all the amusement chain’s children’s areas and are also mascots at the parks.
In 2017, Cedar Fair negotiated a renewed licensing agreement that extends the affiliation with the Peanuts brand to 2025 at all eleven of the Cedar Fair-owned parks. When the agreement to extend Peanuts licensing with Cedar Fair was made, Charles Schulz, CEO of Charles M. Schulz Creative Associates noted “Cedar Fair has been a long-standing and cherished partner to Peanuts, dating back many years to when Camp Snoopy first opened at Knott's Berry Farm in 1983… I look forward to many more years of bringing the joy of my father's characters to the fans in Cedar Fair's parks.”

At Knott’s Berry Farm in California, where six new rides were added to Camp Snoopy in 2018, holiday attractions with a Peanuts theme are strong draws for park goers. Currently, Snoopy and the entire Peanuts gang perform in a large-scale ice skating show called “Merry Christmas, Snoopy!” in the aptly named Charles M. Schulz Theatre. Park goers see Snoopy trimming the tree and waiting for Santa as well as attending a Christmas Ball.

In Virginia, at King’s Dominion, another Cedar Fair park, attendees enjoy a different holiday offering at the Peanuts Playhouse, “A Peanuts Guide to Christmas.” In this production, Charlie, Lucy, and Linus lead a holiday sing along and speak about the meaning of the holiday in a live action production located in the park’s Planet Snoopy area.

That ride is also a mainstay at ValleyFair in Minnesota, as are Planet Snoopy rides such as Charlie Brown’s Wind Up, a kid-size spin ride.

The Planet Snoopy children's area at Kings Island near Cincinnati has been repeatedly named as the Best Kid's Area by Amusements Today. At Cedar Point Amusement Park, guests enjoy racing the Snoopy 500, a pint-sized speedway stock car race along an oval speedway. And there are a wide variety of other Peanuts, Charlie Brown, and Snoopy themed attractions in all Cedar Fair Parks, both for holidays and all year.

While Cedar Fair and Peanuts continue to be a well-known pairing domestically,  Universal Studios is starting to get in on the Snoopy action in the international amusement market with Snoopy Studio making its debut in Osaka, Japan in 2001. The family area has since expanded into the Universal Wonderland adding additional attractions. Seasonal activities include trick-or-treating with the Snoopy and Charlie Brown costumed characters as well as a variety of interactive crafts projects for kids.

And looking beyond the amusement parks, a stage version of “A Charlie Brown Christmas,” has become a touring staple that’s entered its fourth year, and visits over 45 U.S. cities.

In the U.S., the Dallas Arboretum offered a dynamic Halloween-themed Peanuts exhibition, including a Great Pumpkin, and a variety of topiary characters including Linus, Snoopy, Lucy, and Schroeder. Marriott’s Gaylord Hotel has created giant ice carvings that recreate scenes from A Charlie Brown Christmas, also in Dallas.

And ICE! Shows including ice slides, ice sculptures, and more have been presented featuring the Peanuts characters in cities that include Nashville, Orlando, and Washington, D.C.

Located abroad are the Snoopy Garden, a botanical garden on Jeju Island in Korea, and the Baseball Hall of Fame and Museum in Taiwan. The latter fits with a main Peanuts storyline about baseball, and features two museum floors dedicated to Peanuts, a dining area with a Peanuts theme, and Peanuts-themed merchandise spaces.

The Peanuts brand is enduring in the U.S. and abroad, and is a strong draw for families with young children, one which theme parks and other entertainment venues are still eager to embrace.