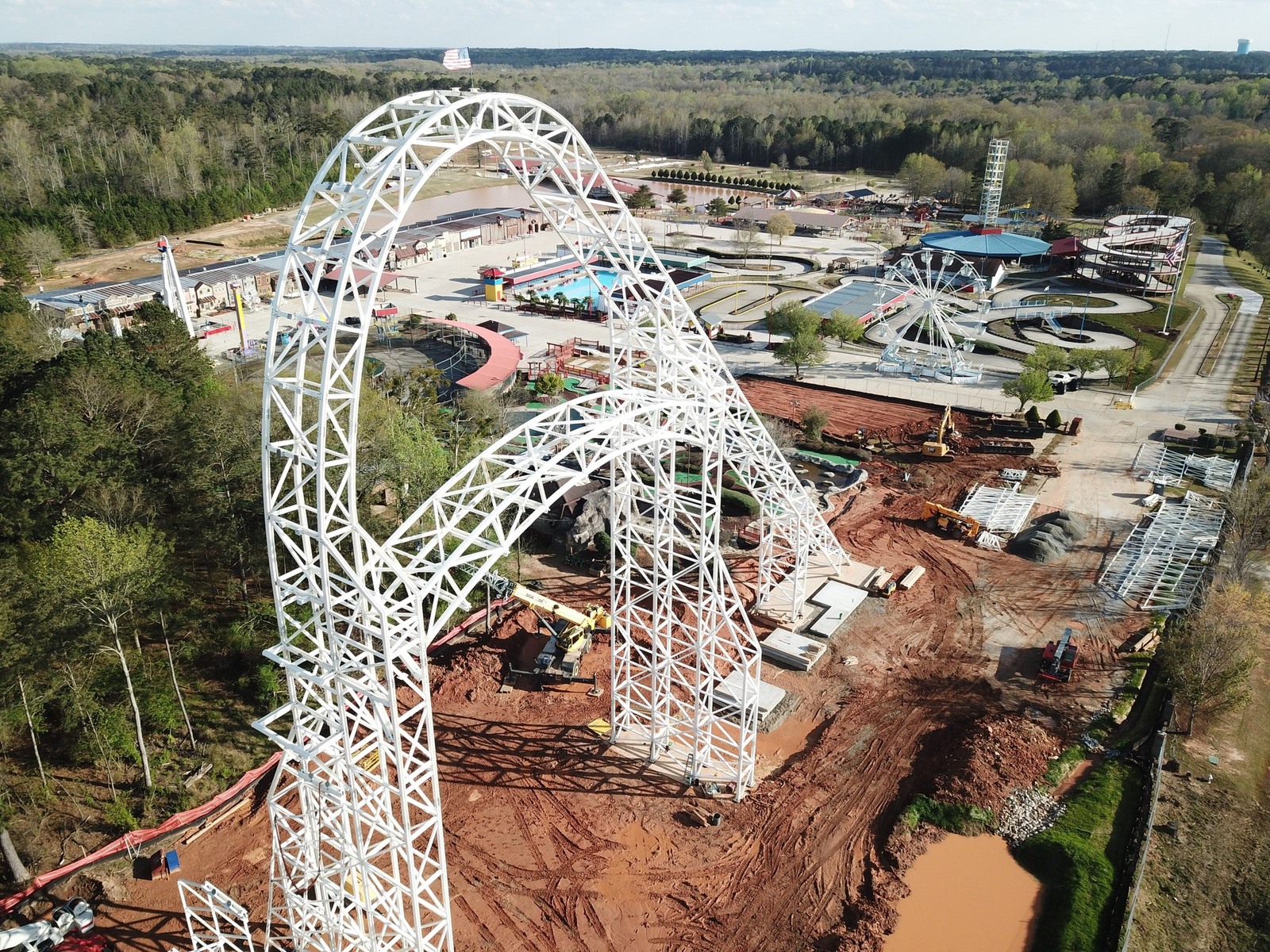 ArieForce One Construction is Underway at Fun Spot America Atlanta
ArieForce One will feature a 146-foot drop, a top speed of 64 miles per hour, and four thrilling inversions.

Fun Spot America owner and CEO John Arie Jr., is happy to put a different, soaring spin on things at the theme park after recent statements about the COVID-19 vaccine drew ire.

“ArieForce One is a tribute to my father's passion for flying, and with all of the airtime moments and weightlessness this RMC coaster provides, it is sure to be a huge success,” he enthused.

RMC's director of design and engineering, Jake Kilcup, is equally proud of the new attraction. According to Kilcup, “As a one-of-a-kind roller coaster, custom designed to the topography and layout of Fun Spot Atlanta, no other RMC roller coaster has this combination of elements,” he said. “The Raven Truss Dive and the Zero-G Roll over the arcade are the first-of-their-kind in the world. In both ride elements the train travels through the center of a uniquely designed truss bridge while twisting at zero-G.” The coaster features two Zero-G Rolls in all and a 180-degree stall.

ArieForce One will be the second RMC thrill ride that's located in the Atlanta area. The other is the Twisted Cyclone at Six Flags Over Georgia. Twisted Cyclone, formerly known as Georgia Cyclone, opened in 2018. That coaster features a combination of a traditional wood structure with a 2600-foot steel track. Twisted Cyclone sends guests upside down through three inversions and includes a 75-degree initial drop into a reverse cobra roll that puts riders perpendicular to the ground. Its coaster train is an original, one-of-a-kind design, modeled after a classic 1960s sports car. But ArieForce Once should be even more exciting.

On January 6, of this year, a ground-breaking ceremony was held for new coaster. The $13 million-dollar Rocky Mountain Construction Roller Coaster is set to open later in 2022.

“The addition of ArieForce One is a huge milestone for our company and the first of many new marquee rides and attractions yet to come,”Arie Jr. said.

ArieForce One includes a variety of exciting elements for riders, such as a steep, 83-degree first drop and the largest Zero-G Stall in the U.S. Its four inversions should serve as a power-packed quadruplet of thrills positioned along the ride's 3400-feet of patented, award-winning steel Ibox track.

An airtime hill with outward banking is the ideal spot for the riders' trains to change direction. 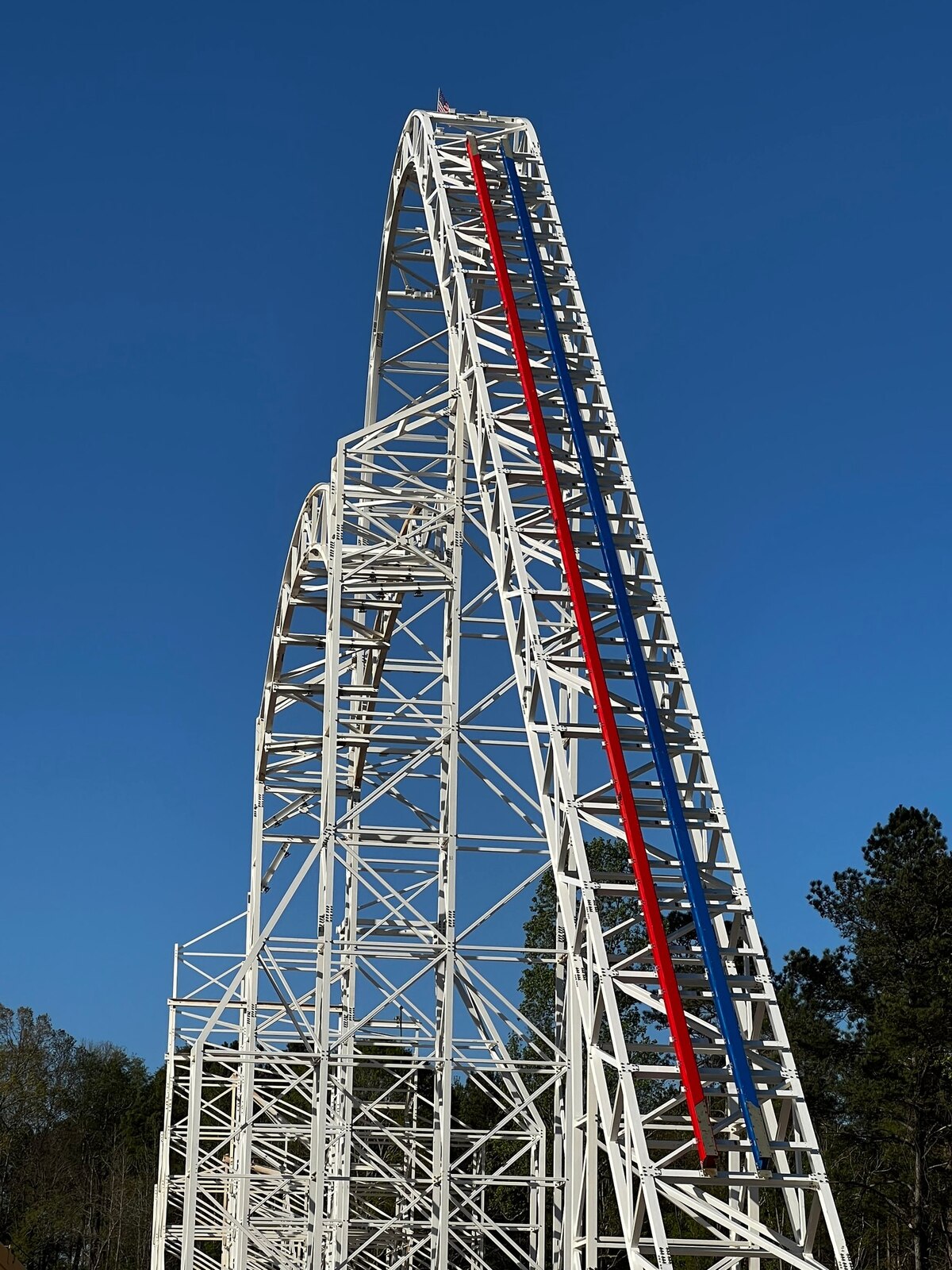 A double-up followed by an airtime drop then sends thrill-seeking guests into a barrel roll and soaring over an arcade building. Other coaster maneuvers feature names such as “fakey airtime hill,” “3.75 G ground hugger turn,” “corked roll” and chili dip” before rocketing riders into the grand finale, a quad down into the brake run.

“The chili dip is a little bit of a move from dirt biking and snowboarding,” Kilcup asserts, describing the ride's action-packed maneuver as like jumping onto a box with a dish-like top section. “You jump onto it, dish through it and jump off at the same elevation.”

As the first full project for RMC from designer Joe Draves, the massive, action-filled project will also make quite a first for the park.

The coaster's passenger trains are steering axle trains in a sleek, state-of-the-art design. And speaking of design, the ride's themed queue lines will be based on John Arie Sr.'s boyhood passion for flight.

All in all, the ride combines the key elements of a thrilling new coaster filled with cutting-edge excitement with some attractively sentimental family lore.

ArieForce One will be located near the main gates of Fun Spot America Atlanta and park attendees will be able to see expansive views of the entire park from its peak – assuming they aren't too busy screaming.

The coaster will be constructed entirely of steel. It's not a hybrid like other RMCs, such as the upcoming Iron Gwazi coming to Busch Gardens Tampa Bay on March 11, which has been hyped as the tallest hybrid in North America, as well as the fastest and steepest hybrid globally. 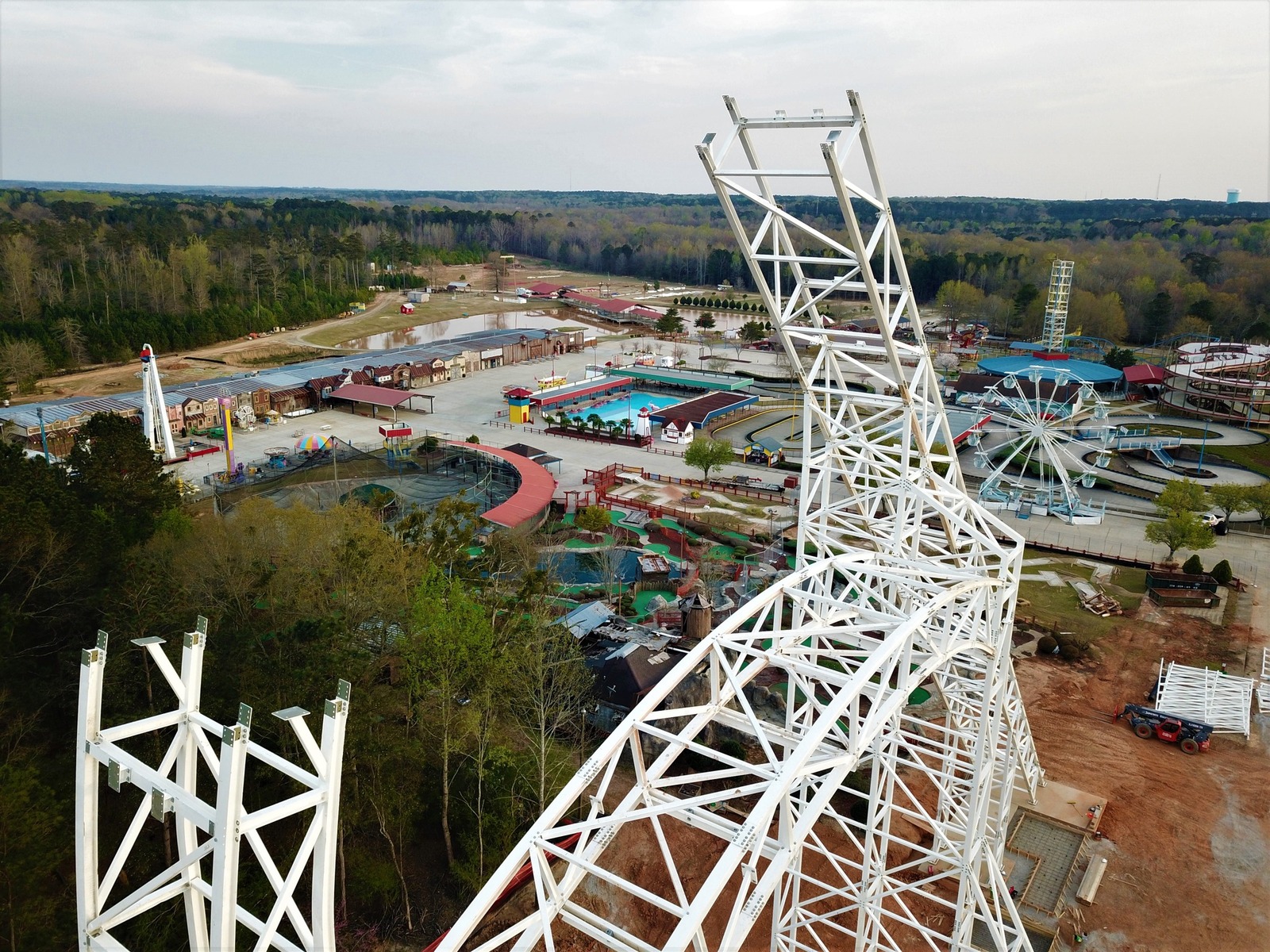 ArieForce One has its own more personal hype. Along with honoring Arie Sr., it is also the most expensive ride at Fun Spot, and marks a major turning point for the park.

“As a one-of-kind roller coaster, custom designed to the topography and layout of Fun Spot Atlanta, no other RMC coaster has this combination of elements,” Arie Jr. emphasizes.

The ride will be the third coaster located at Fun Spot Atlanta, as well as being the first roller coaster to be constructed under the Arie family's ownership. The family acquired the park in 2017.

Noting that the new coaster allows Fun Spot Atlanta to enter the big leagues in amusement parks. Arie Jr. says that “I have always loved every single IBox design coaster from RMC, and I have always dreamed of having one. I wanted to make an impact to everyone in that region that Fun Spot America is serious about our investments, and we want all of our guests to know that we don't settle for anything but the best!”

The family scion originally did not want the coaster named after him, Arie Jr. explains. “He is
a very humble person and doesn't want to receive all of the credit. He has also said that you can't do it alone and it takes a great team to make something like Fun Spot America so special.” But he persisted in naming the ride ArieForce one because “my dad has done so much for us and has built such a great foundation for us to build on.” 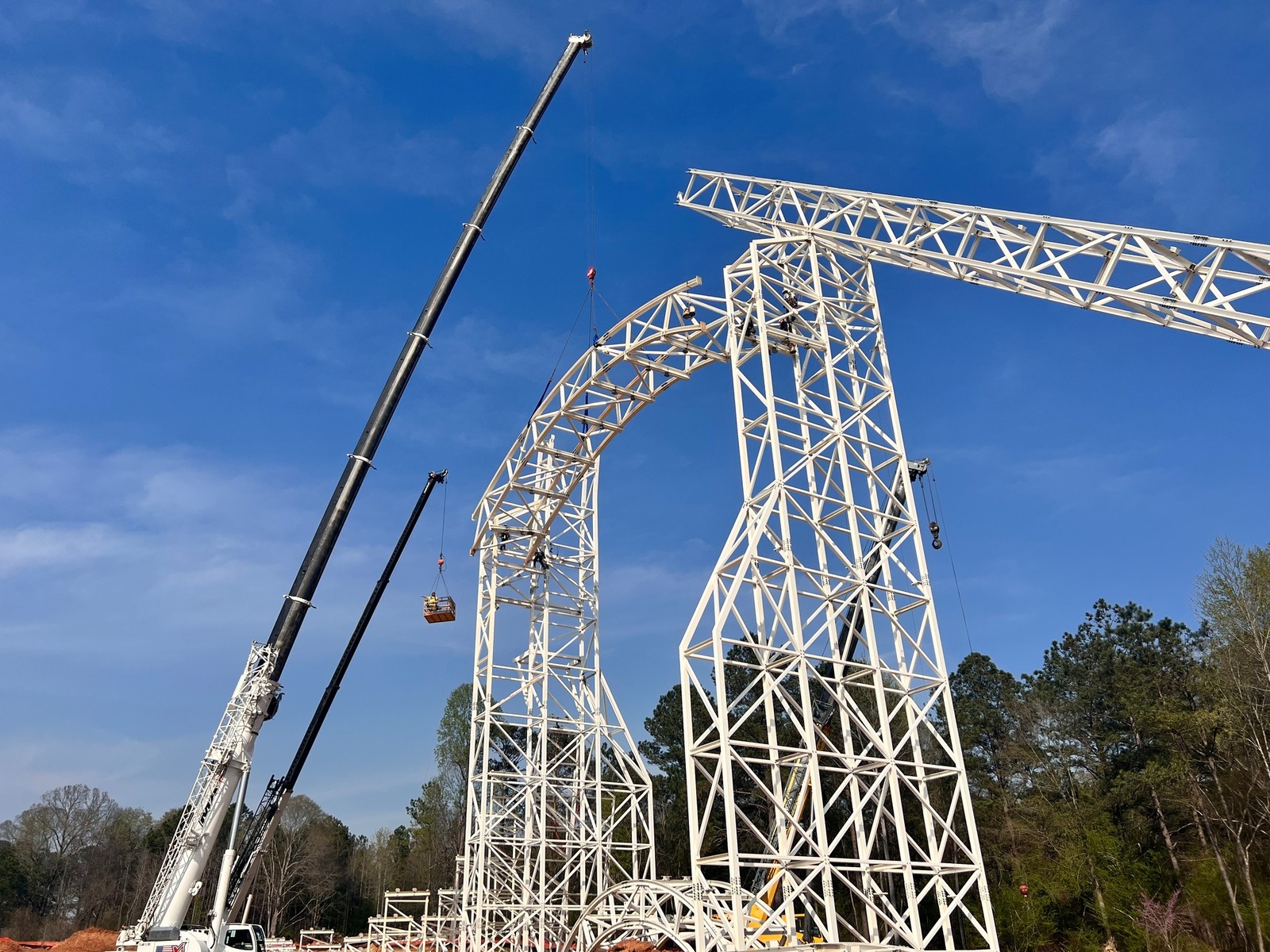 ArieForce One Construction is Underway at Fun Spot America Atlanta

ArieForce One will feature a 146-foot drop, a top speed of 64 miles per hour, and four thrilling inversions.