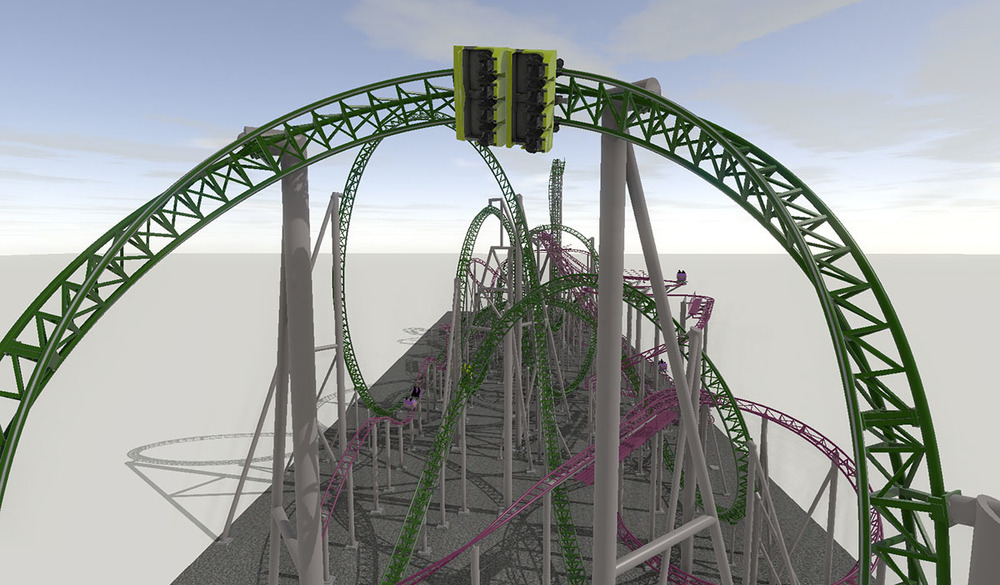 Gerstlauer gmBH Amusement Rides is ready to thrill visitors to the American Dream mega-mall scheduled to open in late summer 2019. The theme park, located in the mall’s Meadowlands, New Jersey location, will be showcasing two new rides from Gerstlauer gmBH Amusement Rides. The company, based in Munsterhausen, Germany is known for its coasters, and the two created for Nickelodeon make a strong addition to a group of four coasters. There are 23 other rides as well at the new mall-based theme park. Gerstlauer gmBH is also behind a different version of the ride, known as the Fairly Odd Coaster that’s located at Minnesota’s Mall of America.

The two coasters at the theme park are connected: the Euro-Fighter coaster breaks the record for the steepest drop on a roller coaster while the spinning coaster holds the title for the world’s tallest and longest free-spinning coaster.
The Shredder is uniquely positioned to become a top coaster-fan favorite as the longest spinning roller coaster in the world. It runs 1,322 feet in length. According to the managing director of Gerstlauer, Siegfied Gerstlauer “We have worked on many projects, but this will be unlike anything we have ever designed. Visitors to Nickelodeon Universe at American Dream are in for a great ride.” The Shredder will hold the title for the world’s longest and tallest free spinning roller coaster.

For even more excitement, the ride will pause at the top of a 122-foot drop, providing riders an expansive glimpse of New York City, just across the Hudson River.

The unbelievable drop just starts out the ride. Gerstlauer describes the roller coaster experience it offers as allowing unlimited possibilities for layout and customization within an existing terrain or footprint – such as inside a mega mall.  It’s described by the company as a “combined dark ride and roller coaster, launched with LSM or compact on a base frame.”

The cars themselves carry eight passengers and can master virtually any ride configuration from a loop to an inline loop, overbanked curve, heart-line roll, rollover-loop, zero-G roll, dive loop, or cobra roll among others.

It’s designed for the ultimate in safety according to Gerstlauer, with comfortable shoulder restraints, that include what is described as “redundant, hydraulic cylinders that safely keep the passengers in the ergonomic bucket seats” throughout the ride. The ride includes sturdy, durable magnetic brakes for the utmost in “comfortable deceleration before they enter the station.” The company says the ride is also energy efficient due to using individual cars and low-energy consumption drive concepts. The ride is available with either foundations or a base frame.

At American Dream, The Shredder is themed and named after the Teenage Mutant Ninja Turtles’ nemesis, Shredder. The unique coaster will hold the record for being both the tallest and longest free-spinning roller coaster. According to Gerstlauer, a spinning coaster combines roller coaster speed with a carousel ride experience. Coaster cars spin freely and react to acceleration, creating an individually unique experience for each rider. The company’s safety reputation is high, and with spinning coaster rides, that means passengers are held safely in their seats by lap restraints.

Along with these combined coasters, Gerstlauer offers eight other coaster styles in its manufacturing and design quiver as well, including the soap-box styled, 22-meter Kiddy Racer to give the littlest riders a safe and age appropriate thrill; and a six-passenger Launch Coaster that provides a rapid acceleration of 1.2 Gs in 1 to 3 seconds for its 6-passenger cars, and smooth acceleration due to state of the art linear synchronous motors. The company offers bobsled racers, family coasters, and wooden coasters, too.

Aside from roller coasters, Gerstlauer also makes a Giant Wheel, designed to be either stationary or transportable. The iconic classic ride offers brilliant LED illumination with multiple color patterns. It can be customized to offer four columns instead of eight. Gondolas are V-shaped and feature hanging-arms for the best possible rider views. The closed design makes the ride family friendly, and 360 degree windows provide the view. The company also stresses the ride’s energy efficiency, using electric motors that are also quiet.

Flat rides and transportation systems round out the family of rides that the company provides. Among the flat rides offered is the Sky Roller, which offers an individual interactive ride in open seats, with wing control on the side. It allows riders to choose their type of ride – a scenic view, or a thrill ride. Gerstlauer received the Bavarian State Prize for the ride at the 2018 International Trade Fair for craft trades.

The waltz ride offers a circular track in free-rotating gondolas; the Space:Walk is a moving platform controlled by weight shift.

The company has rides located throughout North America, including Dollywood in Pigeon Forge, Tenn., and Legoland in Carlsbad, Calif. The company also has rides in Europe, Asia, South America, Australia, and Africa.