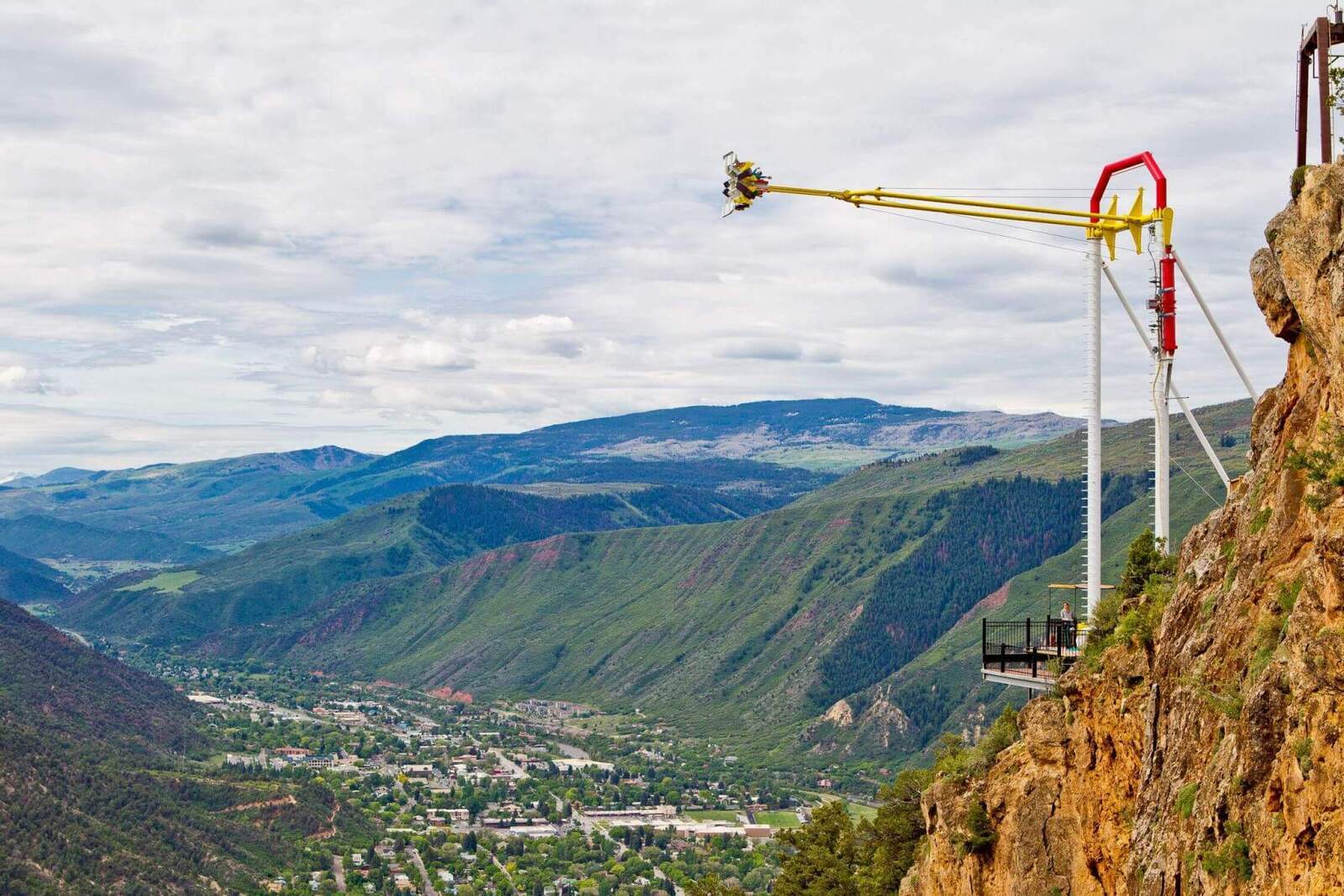 Glenwood Caverns Adventure Park has a dramatic location amid mountainous geography. The park's location is some 7,132 feet above sea level, making just arriving an adventure. And now, the park appears to be even more dedicated to embracing its location with a new mountainside coaster. The Gerstlauer-designed coaster is named Defiance, after the original Glenwood Springs town name.

While other park coasters are placed on reasonably flat locations, including a Tivoli coaster from Zierer and a Hurricane coaster, Defiance is following a different logistical location altogether, utilizing spectactular views. It's positioned on the side of Iron Mountain, creating unique views along with its thrills. Due to the location of the build, it is the most expensive investment in the park's history, according to park co-owner Steve Beckley. “This installation is even more expensive than the gondola.” The gondola is what visitors ascend to reach the mountaintop park. 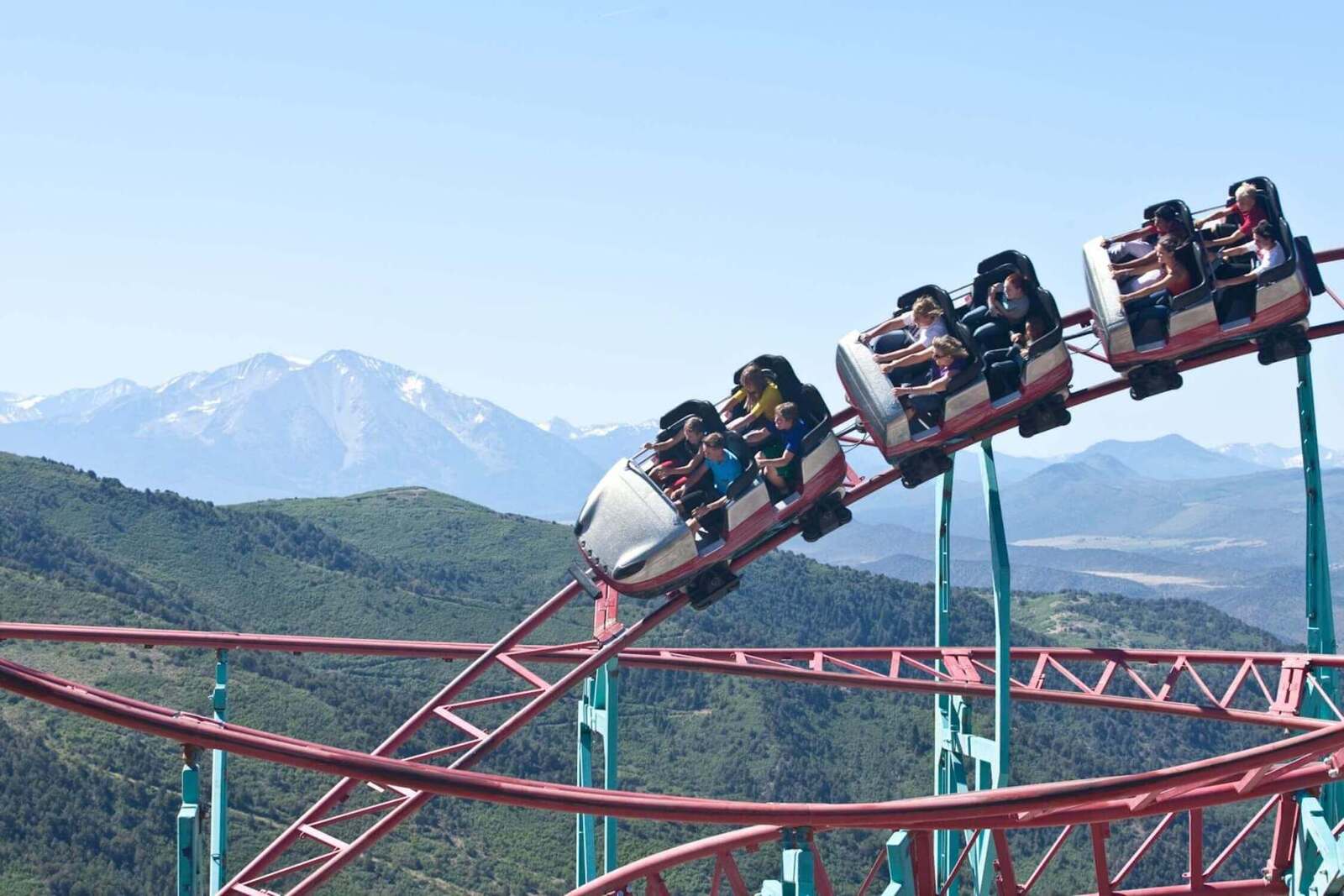 Ride Entertainment, which represents Gerstlauer in the U.S., also erected the ride, which business and development COO Amanda Mercado says was “definitely a challenge.” She describes the site utilized as being undeveloped mountainside “with an elevation change of 100 feet across the site.” That is a startling comparison to the company's usual coaster site, which on average usually has an elevation gain of 10 to 20 feet throughout the site.

Beckley notes that while all mountaintop installations can indeed be difficult due to design and installation challenges on a site, Defiance created additional installation challenges for the park, including transporting the steel used to construct the ride. Ride Entertainment's Mercado relates that transporting all that steel up a 1700-foot elevation change from the storage area to the ride site took a great deal of pre-planning in order to reach its final position.  Logistics such as how pieces were to be moved, to placement of equipment, and assembly sequences all were planned out. 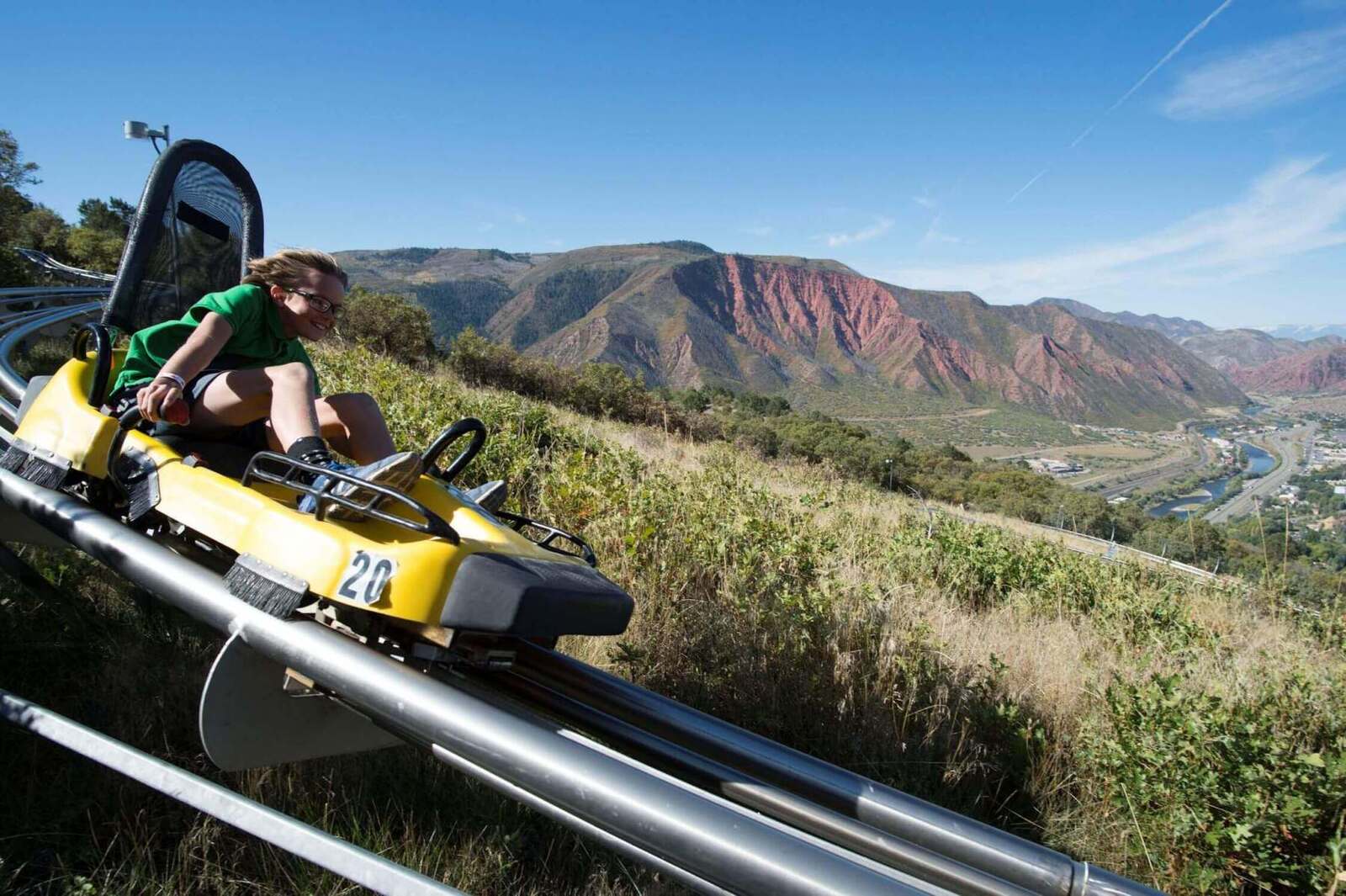 But one thing that couldn't be planned was the weather on the mountain, which ended up being its own special challenge, battling snow, ice, and extreme winds.

Glenwood Caverns general manager Nancy Heard attests that the foundation footers – an impressive 77 of them – were utilized in the depth of winter, and the park had to do a lot of road work just to keep the access road usable for the concrete trucks. On top of that, “Concrete trucks could only be partially loaded due to the steep grades.”

In addition, crane pad spots had to be flattened, and because the semi-trucks carrying large columns couldn't turn when they reached the top, the trailers themselves had to be lifted, using cranes, simply to turn them around. The crane itself could only be positioned in three different places, adding to the importance of preplanning to prevent being literally boxed into a corner while building.

And the seasonal challenges didn't end with winter storms, Heard reports that this was “the windiest spring in 40 years, which impacted our ability to operate cranes to assemble the ride. Crews were coming in as early as 5 a.m. in order to get the most out of the day before the winds picked up... there are no solutions for poor weather. This was one of the windiest spring seasons on record.”

But despite it all, Heard calls the ride's construction a highlight of her career, adding that “It has been an absolute pleasure to work with Gerstlauer and Ride Entertainment.”

Defiance opened in early July, with a grand opening on July 9th, when the park also offered giveaways, swag, and live music in celebration among its family-friendly events.

While Beckley described both the amazing views from mountainside to valley and the feeling of thrilling to the fear of waiting for the first drop; Heard says “My favorite moment is the top of the lift hill when you become upright, after having ascended the lift hill on your back…”

Riveting views are a big part of the experience, although briefly seen. Vistas of the town of Glendwood Springs as well as both the Colorado and Roaring Fork River valleys are viewed from the top of a vertical lift that rises 75-feet.

Then comes the thrilling part: due to the uneven terrain, riders will experience a thriller of a drop of 110-feet. And according to Heard, the drop is made more exceptional due to a steep descent of 102.3 degrees and a top speed reaching 56 miles-per-hour. That 102.3-degree freefall is the steepest in the western U.S. The ride also features a 98-foot twisted top hat switch, an 111-foot banana roll, and a heart-pumping 41-foot Zero-G heartline-roll. 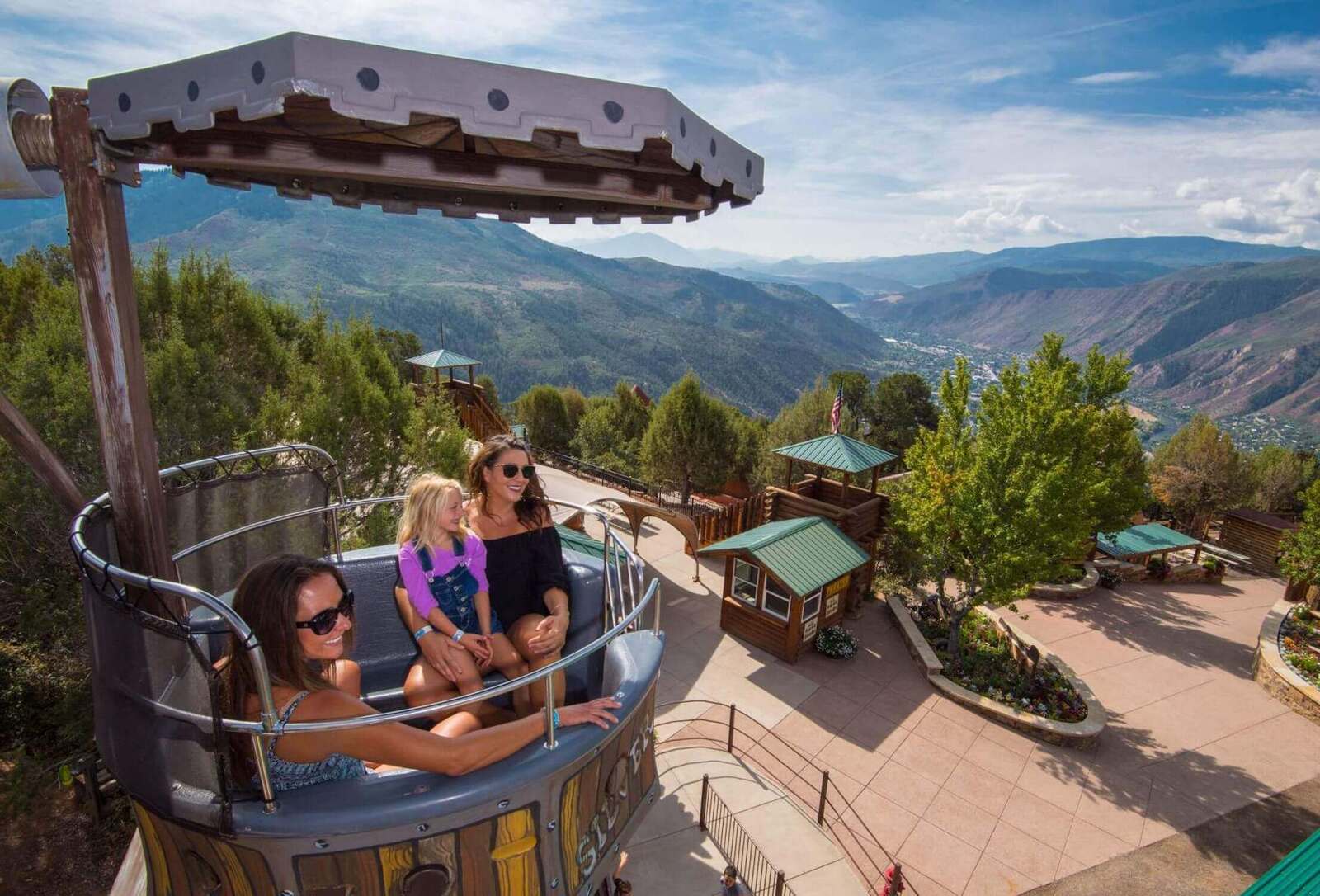 Guest response has been strongly positive, with Heard noting that riders are excited enough to get back into the queue line again immediately after getting off the ride, calling it “a testament to a good ride when riders jump right back into the queue.”

Riders describe the experience as being packed with loops, rolls, and twists, with a last final spin that adds even more excitement. It lasts approximately a minute, but packs a powerful, adrenaline boosting punch along with its expansive views.

Currently, Funday tickets to Glenwood Caverns Adventure Park are $67 and include all of the park's thrill rides, the gondola, and two cave tours. Annual thrill passes for the park start at $139.The park is open from May to October. Along with Defiance, other coasters at the park include the Alpine Coaster, the first mountain coaster in the U.S., as well as the Cliffhanger, which stands as the highest-elevation full-sized roller coaster in North America. 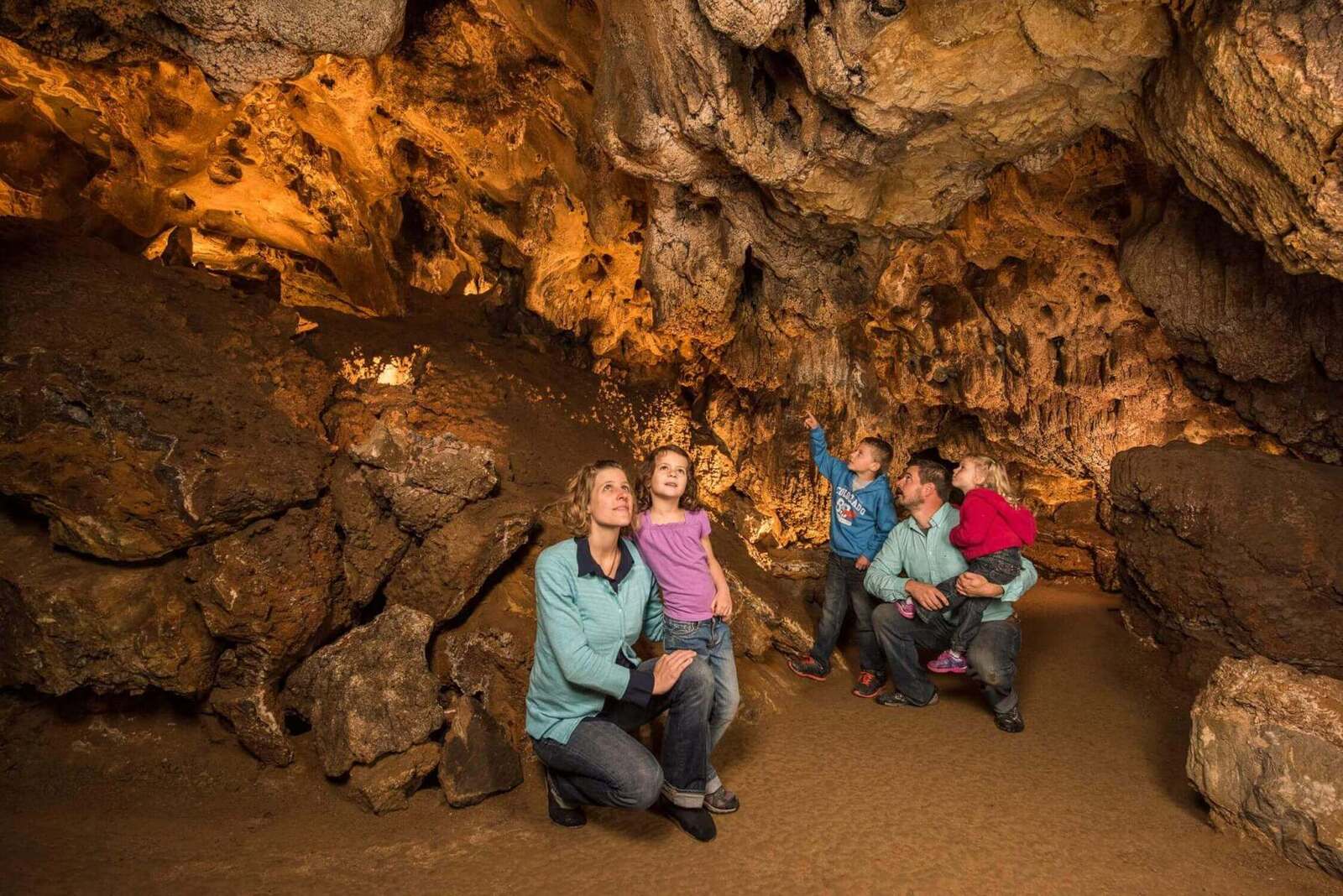