Glenwood Springs is About to Offer a New Mountain Thrill 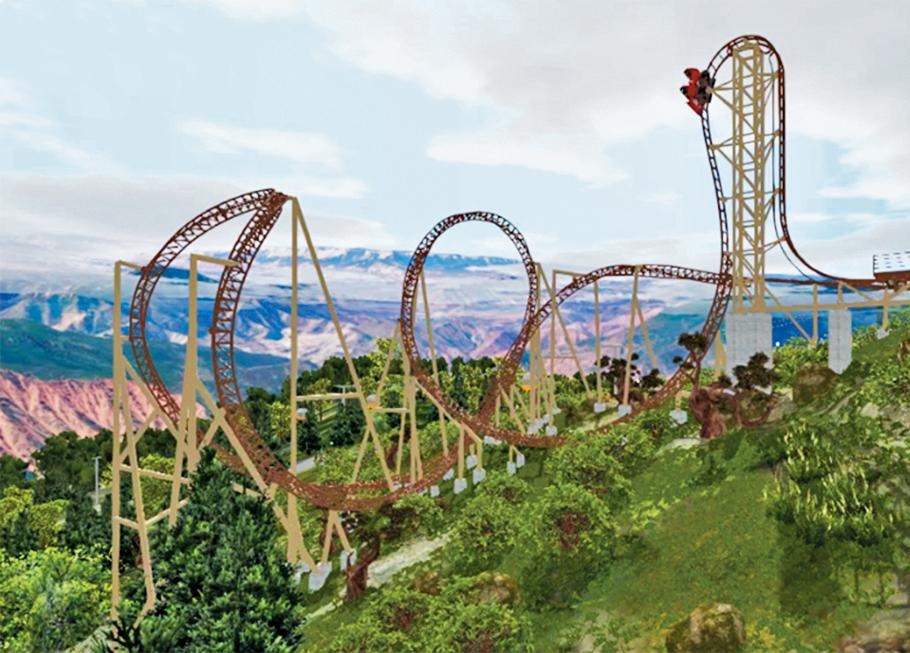 Glenwood Caverns Adventures Park will be taking guests to a new height in 2022.

The theme park is creating a major new roller coaster planned for a summer  2022 opening in Colorado. The ride will feature a 75-foot vertical incline – but it is probably the free fall that follows the rise that will create the most thrills. That free fall is planned to be a record-breaker at 110-feet and a 102.3 degree drop from an elevation height at the top of 7132-feet.

The ride speed is planned to be 56 miles per hour. The ride will also include a high-speed bank and a Zero-G heartline-roll.

While the ride will only last 55-seconds, it will be heart-stopping thrill. Scheduled to be manufactured by the German-based Gerstlauer Amusement Rides, GmbH, the roller coaster will seat eight people each in three different cars and should be able to carry approximately 750 riders hourly.

The ride will be named Defiance, in homage of sorts to the Glenwood Springs theme park's original location name of Fort Defiance. But the name signifies the thrills and chills of the ride itself, from twisted loops to vertical drops and impressive views, as well as three different inversions. In short, it will defy both gravity and riders' expectations – and it might just be expedient to clean out your pockets before taking the ride.

According to Ed Hiller, the CEO of Ride Entertainment which will be installing the new coaster, with Gerstlauer as a long-time collaborator, he is “always astounded by their creativity and ability to innovate no matter what the project is.” Hiller believes the new coaster's location as well as its twists and loops will make it a world-wide destination.

At its peak, the coaster will spend a moment in what is termed a panorama stall, allowing a wide and spectacular vista at a pretty high altitude, given its Colorado mountain location, at a whopping 7,132 feet above sea level, which tops Iron Mountain, already rising 1300-feet above the Colorado River and the town of Glenwood Springs. The ride will be the park's biggest ride investment so far, and will truly accentuate the park's mountain location.

Nancy Heard, general manager of the park, said the view will be “phenomenal” and the drop will be breathtaking. As the cars soar downward, the track itself descends into a rugged ravine.

While the park asserts that the new coaster will have the steepest freefall drop in the Western U.S., Utah's Cannibal at the state's Lagoon theme park takes riders 208 feet, and down into a 115-degree free fall through an underground tunnel, traveling up to 70 miles-per-hour with a 140-foot inverted loop and three inversions. But nothing will top the view from Defiance from its 110-foot drop.

The tech manager at Ride Entertainment, Gerald Rider, explains that another unique feature of the ride is the fact that while most beyond-vertical coasters will feature holding or trim brakes to stop or slow the ride, Defiance will be truly gravity driven as a freefall drop.

Adding to the intensity of the ride experience: the seats will include only ratcheted lap bars, no over-the-shoulder seat restraints. Heard notes “You'll be suspended at the top of the mountain looking down at Glenwood Springs…”

Along with the drop, riders on Defiance will also experience a twisted top hat roll, a flipping banana roll, and the final zero-G roll tossing them while rising shortly before their descent. Originally, the park had considered having the coaster literally go off the cliff edge, Heard notes, but the design for this type of positioning was a budget buster.

Hiller describes the installation of the ride as being a potential challenge, considering that visitors park at the bottom of the mountain and take a gondola to the top. Service vehicles utilize a dirt road which includes switchbacks. Directing semitrailers carrying installation gear, track, and other equipment to the mountain top will require planning. Hiller foresees unloading the trailer, then taking a crane to lift the flatbed and then “turn it around 180 degrees” to descend the mountain again as turnarounds are difficult.

With installation scheduled to begin in the early spring, as well as the steep and twisty terrain, weather may also be a concern for the installation process.

While waiting for this new thrill of a lifetime next year, in the meantime, the park offers its Giant Canyon Swing that does go sailing over the park edge above the Colorado River some 1300-feet below the pendulum's arc. The park began adding new rides in 2005, initially as a way to keep visitors busy while they waited to enter the two cave attractions that formed the original basis for the park.

But today, the rides themselves are important attractions, from 2017's themed Haunted Mine Drop tower ride to two small coasters, both an alpine and a zipline-type ride with side-by-side seating for riders, and the Giant Canyon Swing.

But Defiance will be something else altogether. Heard, pun unintended, describes the park's commitment to new rides post pandemic as “a big shot in the arm.” As well as a just-under-a-minute thrill of a lifetime.