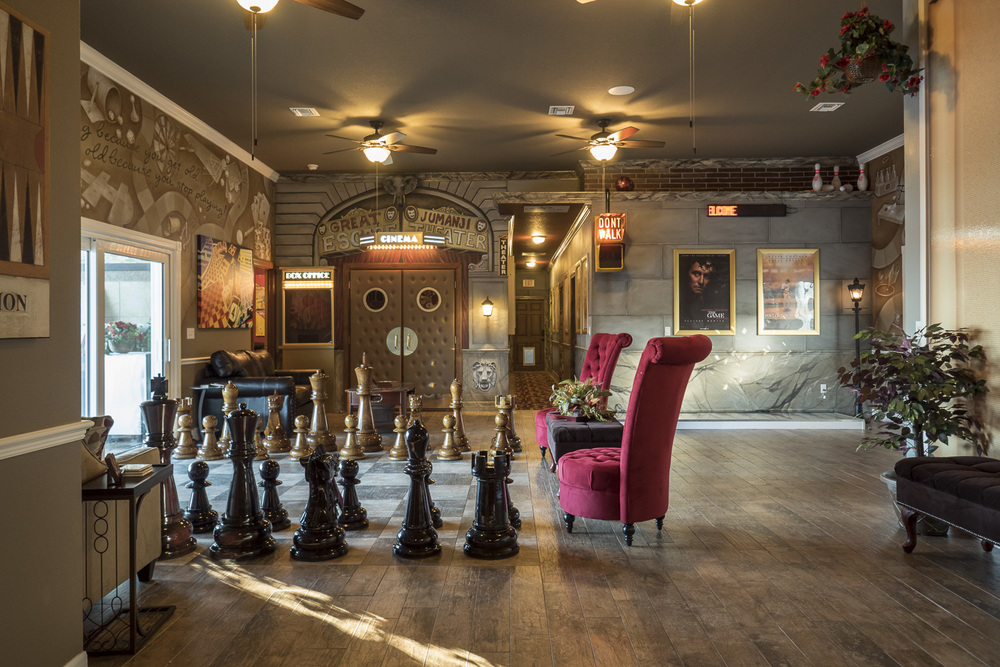 There are escapes and then there are immersive escapes. The new Great Escape Parkside attraction  and its sister property, Great Escapes Lakeside are mansion themed attractions that accommodate live in guests. The concept allows up to 54 guests to participate in what is essentially their own private theme park, with individual rooms serving as attractions along with indoor and outdoor common areas.

This is a fully immersive experience and one that is proving to have a huge viral following. Inviting visitors to live out their fantasies in rooms designed like board games, the locations offer 15 and 13 bedrooms respectively with 13 bathrooms on estates spread over 10 private acres. As noted, each room is its own separate themed attractions; visitors can choose from a wide range of  experiences such as living in a life-sized game of Monopoly or a Ms. Pac-Man Maze. The theme is gaming fantasies with a sleep-over twist.

Among the themed rooms is a laser room - a luxury room that in the dark transforms into a commercial laser maze game. A clock ticks and laser contact is to be avoided: the lowest recorded score to beat at this room-attraction is 20.6 to date. The installation includes what Parkside describes as $25,000 worth of tech, and along with the maze, there’s a Laser Smash alternative, that allows guests 30 seconds to hit as many lasers as possible, and laser guns for a laser hunt game.

The Twister theme room features a fold-up Murphy Bed to maximize playspace. Here, hand-painted Twister circles spill from bed to walls to floor and into the bathroom and closet. Two rooms feature a Clue-game theme; they are combined to form a “Jack and Jill” suite, with wall-art that doubles as clues. A video monitor introduces the game, and allows players an hour to find them, and escape the room. The Clue game room allows up to 10 players, and can be re-set. Kids can gravitate toward a Lego themed room featuring giant foam Lego blocks and bunk beds.

Beyond the stay-over rooms, the property indoors includes a full karaoke stage, and a theater with comfortable reclining seats and a lobby area modeled after Jumanji.

The venue also includes two escape room games, a water slide, themed pool and lazy river, video game arcade and carnival midway with skee ball. The grounds hold a large series of board-game like attractions, such as a giant human Whack a Mole, and 15-foot tall soccer darts. There’s a giant chess set to play, too.  Indoors, visitors can solve what the attraction bills as the world’s largest printed maze, which stands at a whopping nine feet tall, ten feet wide, and has only one start-to-finish path to success.  A giant Connect-4 game and 6-foot-tall Scrabble game are among the other group board game activities built into the site.

Returning to a look at the outdoor attractions, the human Whack a mole pits one person as Whacker against a number of different moles with their own individual cubby, from which they jump out to grab the plastic balls.  Also allowing human participation inside the game is Human Bowling: players climb inside giant rolling “zorb balls” to roll or be rolled into pins.

The swimming pool’s design follows that of a billiard table, with the lazy river as “pool table bumpers,” and a hot tub that resembles a pool chalk cube.  The fast-moving water slide is the other water attraction on the property. Near the pool are a large screen TV and an actual billiards table.

Property rentals run from $1695 to $1395 for weekday stays and $1795-1545 on the weekend in season. Prices are based seasonally, with the highest rates for summer and major holidays.

Located in Groveland, Fla., about 45 minutes from Walt Disney World, the private “theme park-like” setting is touted as an adjunct to a major theme park visit or as a trip of its own for large groups. The sister property, Great Escape Lakeside, gives visitors a 40,000 gallon pool, and attractions such as a larger-than-life Lite Brite game, human Foosball, human bowling, a giant game of Operation, and a large-scale Jenga game dock; as well as canoes, paddle boats and kayaking on the property’s lake. The Lakeside location, like the newer Groverland, also includes its own indoor arcade, an indoor nightclub, and Jumanji-styled theater. The Lakeside property can hold up to 43 guests.

Regarding both properties, manager Ginger Howard explains that the idea behind their creation was to “create a home that could provide an entire vacation experience without having to leave to go anywhere else.”

Rentals are sold out through 2020, indicating the idea is extremely popular. Unlike a large scale theme-park experience, there are no lines to wait in to participate in attractions, and the live-in feature appears to click with visitors in a big way: the era of private theme-park attractions may be about to begin.