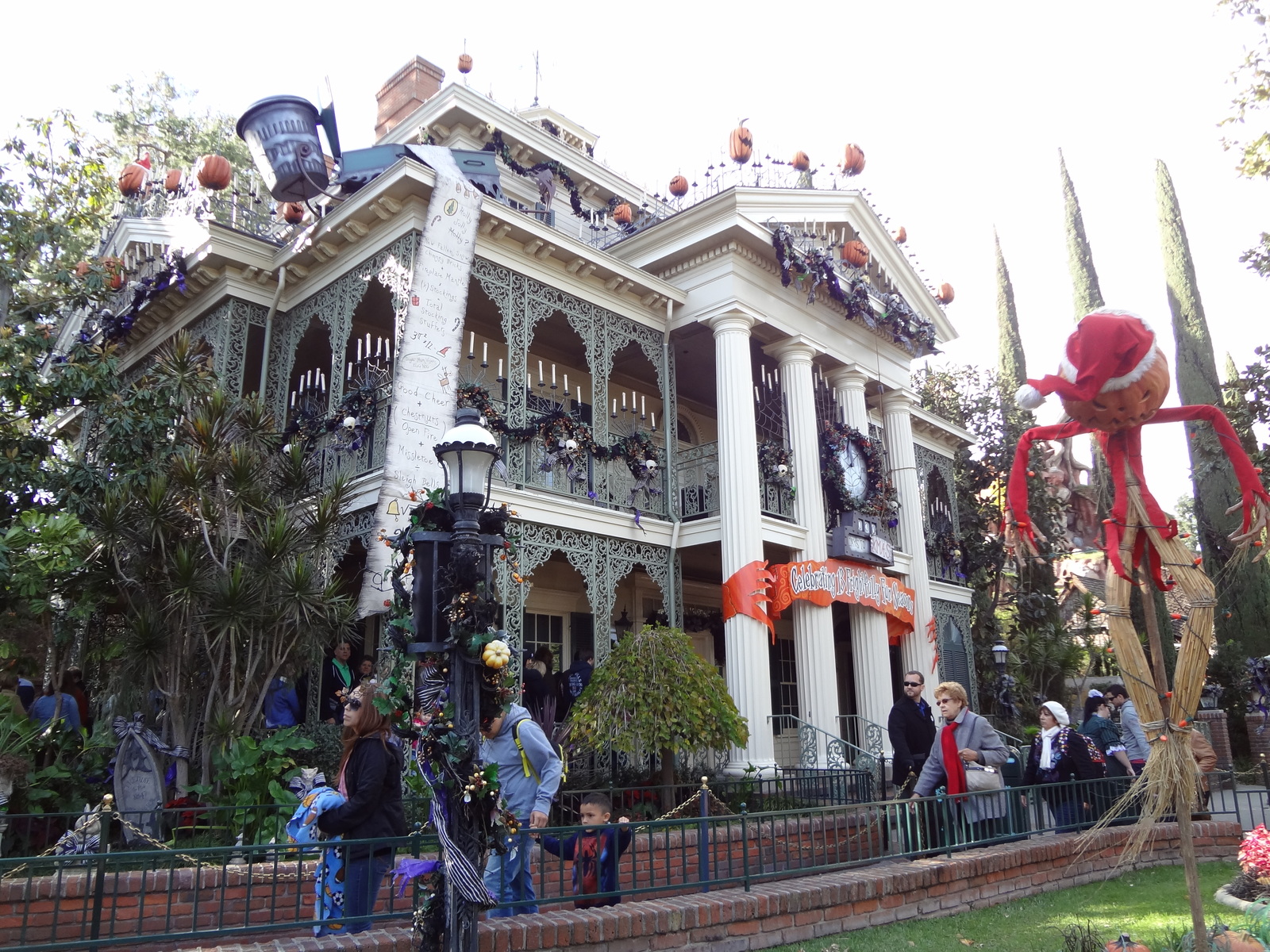 Renovations and refurbishment are happening all around the park at Disneyland for 2020. The spookiest: The Haunted Mansion attraction is closing temporarily for an extensive restoration; however, the overall look of the ride will remain unchanged, with no structural changes planned. These renovations and refurbishments are scheduled to begin on January 21 and take around two months to complete.

The scheduled restoration follows the removal of the Nightmare Before Christmas holiday overlay of the attraction. The beloved haunt hot spot recently celebrated its 50th anniversary, and will be fully refreshed but unchanged following the refurbishment. On the restoration to-do list: painting of the attraction’s interior and exterior, lighting updates, and mechanical work in the mansion.

The Haunted Mansion is not the only Disneyland attraction undergoing either refurbishment or maintenance as the park starts a new decade. Indiana Jones Adventure and Snow White’s Scary Adventures are also getting a makeover: Snow White to the tune of $445,000; Indiana Jones with a $300,000 price tag.Snow White is receiving not just a refreshing but a re-imagineering: Disneyland imagineeers are updating the story line, and are eliminating the scary ending from Snow White’s Scary Adventures and adding a happily ever after finale, as well as state of the art LED lighting, and tech updates. The refurbishment includes new music, black lighting, laser projections, and a new animation system. The ride was last updated in 1983.

Snow White will have the most extended stay off-line; this popular Fantasyland attraction closed January 7th, and is scheduled to remain shuttered through May 21, 2020. That date has not been officially announced as the ride’s reopening date, but it is the expected opening according to Disneyland representatives. The original Snow White’s Adventures was opened at the park’s inception in 1955, along with Fantasyland attractions such as Peter Pan’s Flight, Mr. Toad’s Wild Ride, the King Arthur Carousel, and the Mad Tea Party rides.

Speaking of the carousel, the King Arthur is also getting a long-awaited refurbishment, closing January 21st. King Arthur will be closed until Mary 22nd, 2020, indicating a substantial amount of work will be done on the iconic ride.

Originally constructed in 1922 by G.A. Dentzel Company, the carousel first operated at Sunnyside Beach Park in Toronto, Canada from 1922 to 1954. Disneyland purchased the carousel and moved it to Anaheim for the park’s opening in 1955.

“It’s a Small World” closed January 7th for refurbishment after the holidays; Hyperspace Mountain, and the Mark Twain Riverboat will also undergo closures during January.

The Haunted Mansion is scheduled to return to its spook-tacular status in late March or at the beginning of April; the last day to ride the attraction pre-update is January 20th.

While the time to refurbish is scheduled to take longer than usual, the closure itself is not outside the norm. The Haunted Mansion usually closes down for a few weeks to be rebuilt for a new theme, when the décor goes from the ride’s usual look to a Halloween or Christmas themed look. For the holiday season, the attraction uses a Nightmare Before Christmas theme. The holiday overlay itself often causes some damage to the exterior and interior of the Haunted Mansion; after several years, the need to for a thorough refurbishment results in the attraction’s closure for a few months.

In short, the extended make-over is nothing new, but it joins a collection of major Disneyland attractions undergoing refurbishment during 2020, and commencing during what is arguably the slowest time of year for the park, post-holiday season.

But that’s not all: Disneyland has also revealed a new entrance for Tomorrowland, with the redesigned area planned for completion in 2020. The well-known Astro Orbiter will be surrounded by planters in the new concept art image revealed by the resort. The plan is to open up the area, improving access to Tomorrowland itself while retaining its iconic overall look. The fresh new entrance will replace rocks that were installed in the late 1990s. The pathway entrance will be widened, colorful flowers added, and Space-Age-themed spires will also stand at the entrance border.

The overall refurbishment of Tomorrowland is a part of Project Stardust, which involves a wide range of enhancements taking place at Disneyland to refurbish and update the parks and improve guest flow during the busiest seasons. According to Disney imagineer Kim Irvine, “Tomorrowland has always represented a feeling of optimism… [the land was] originally designed with this notion of being wide open to innovative ideas and technology.” Irvine adds “When we started looking at the different Tomorrowland entrances through the years, both the 1955 and 1967 versions had a very optimistic appeal which resonated with us.” 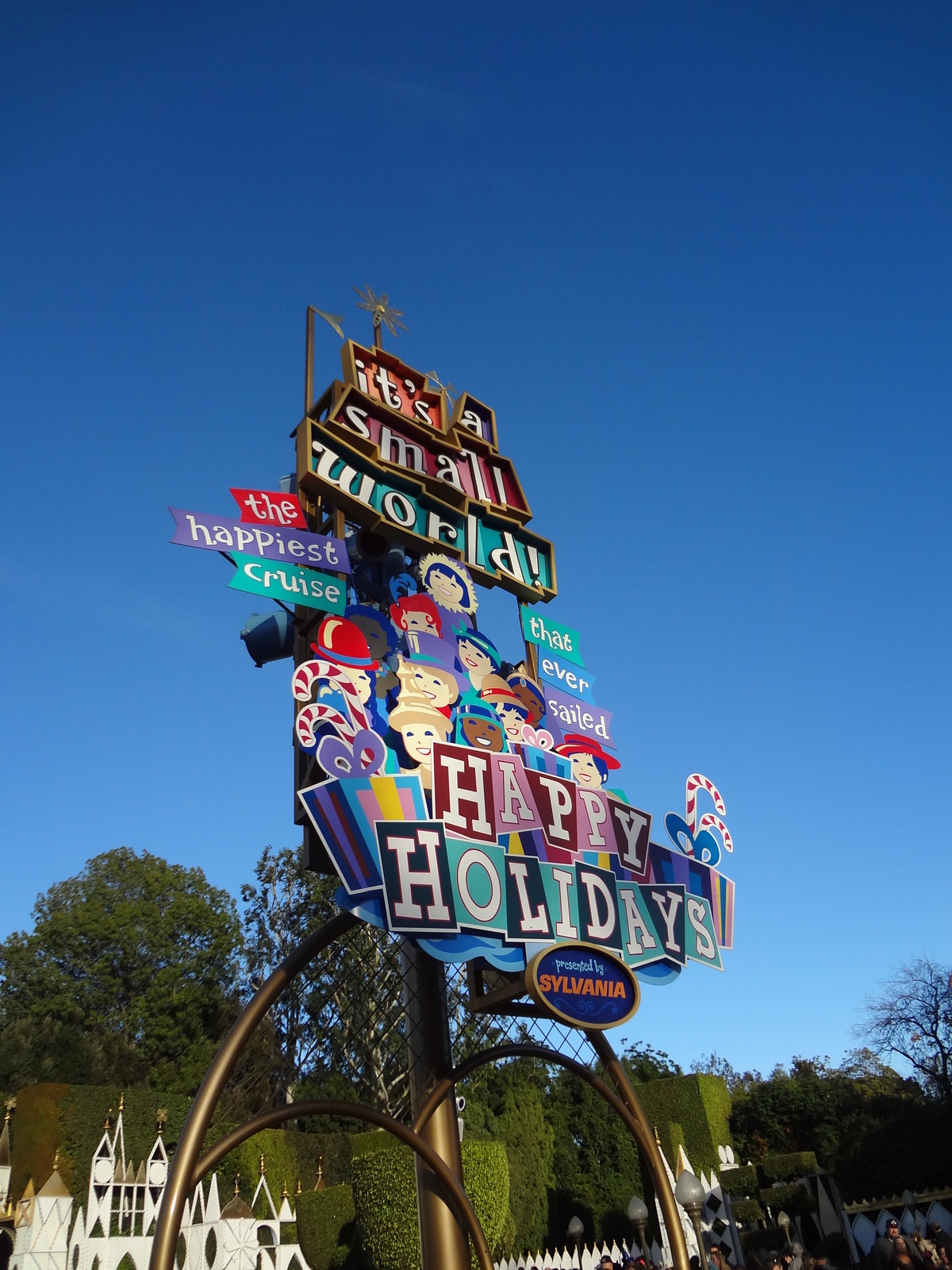 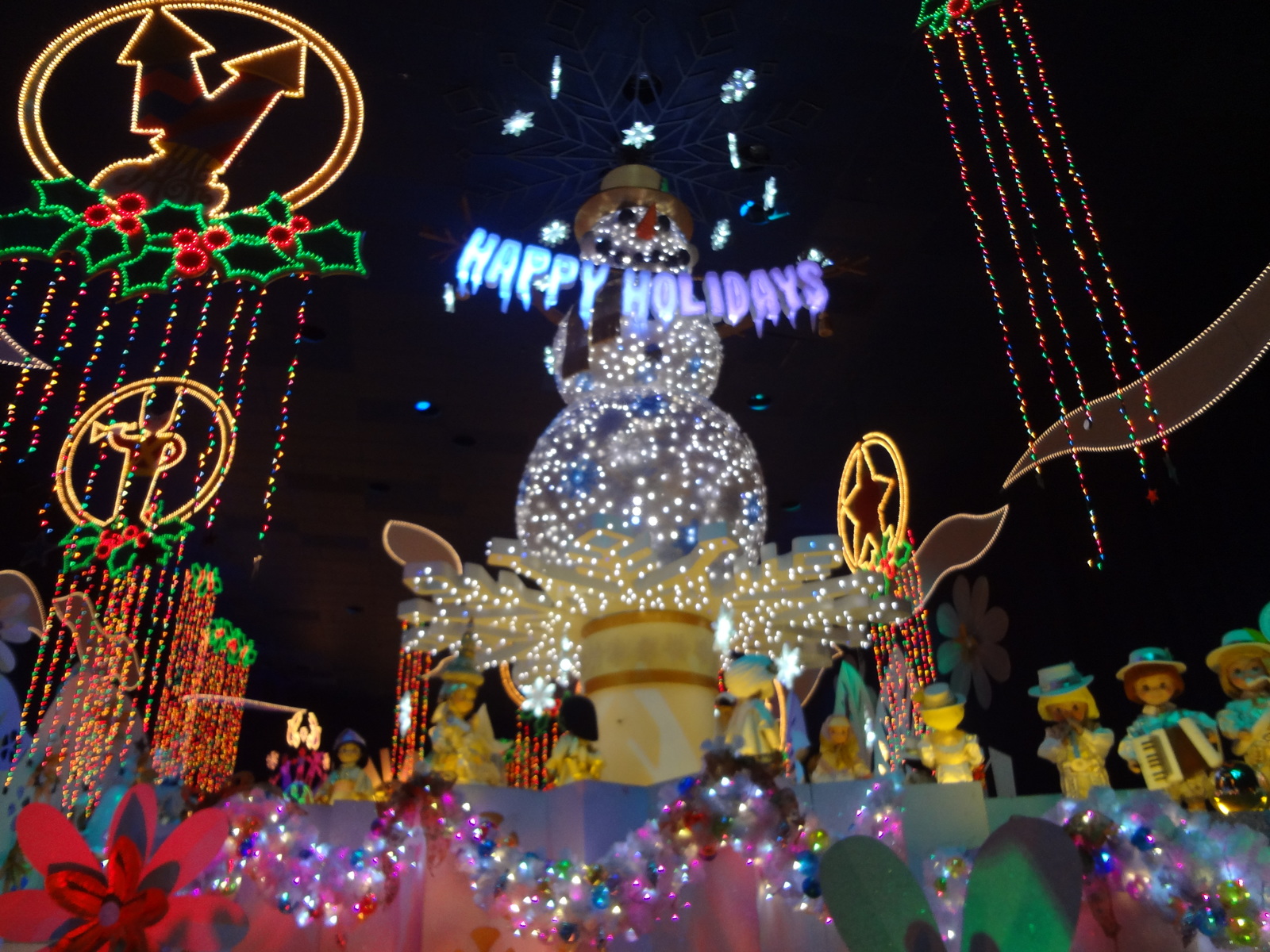 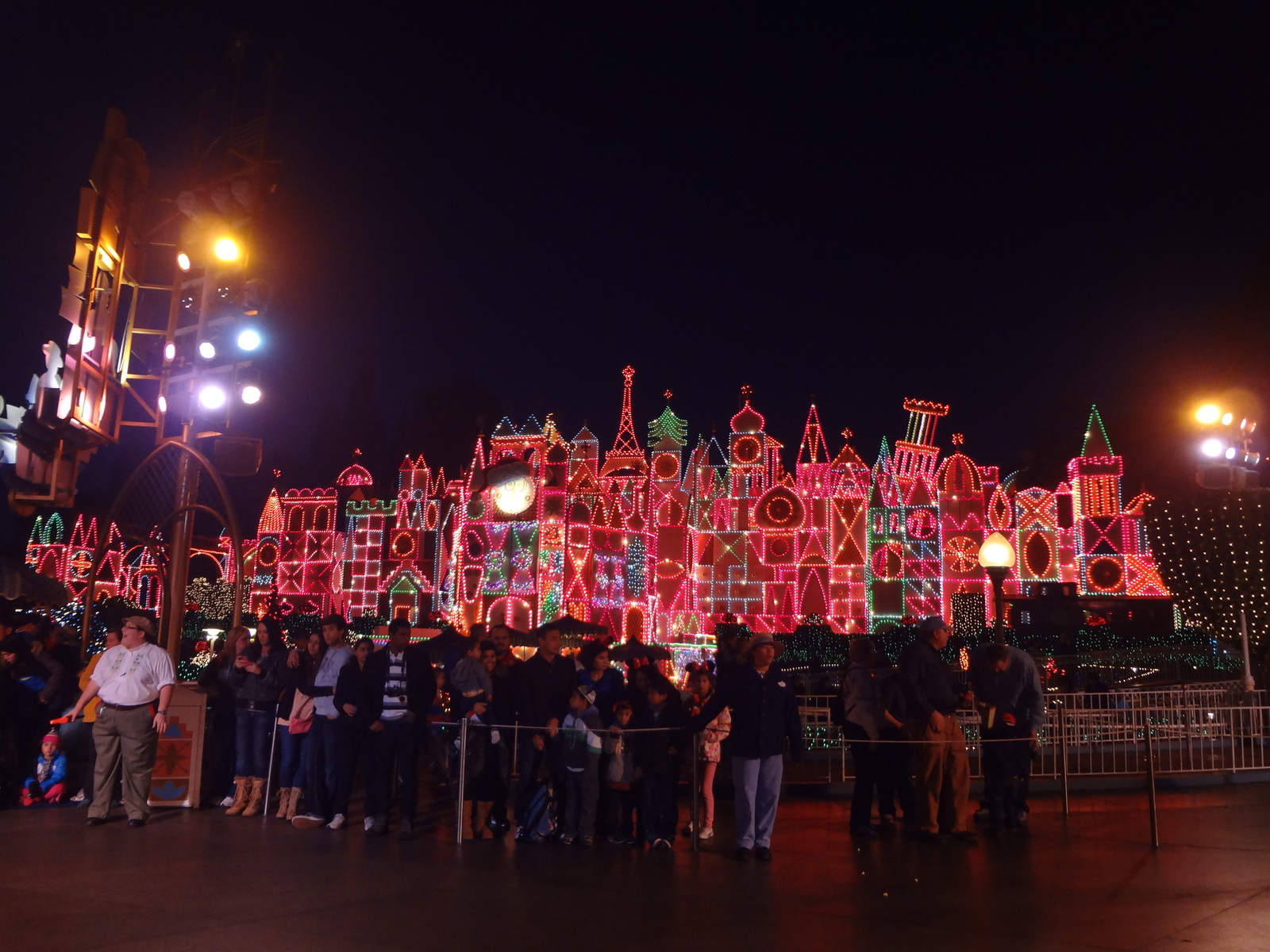 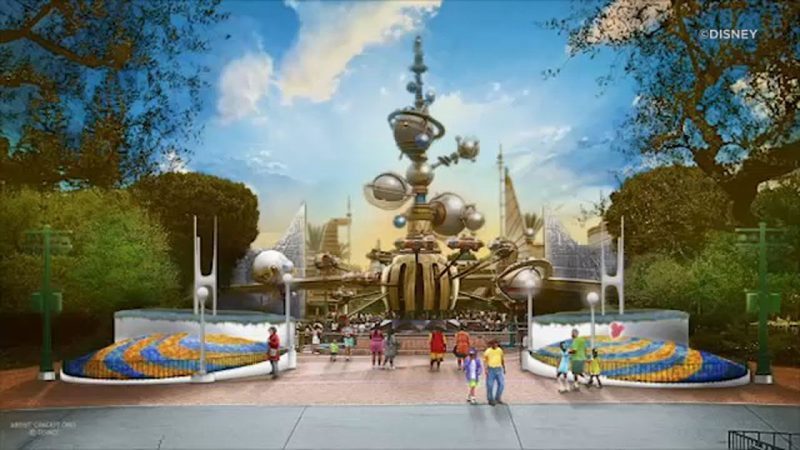