Holiday Events Cap Off 2021 Season at Many Theme Parks 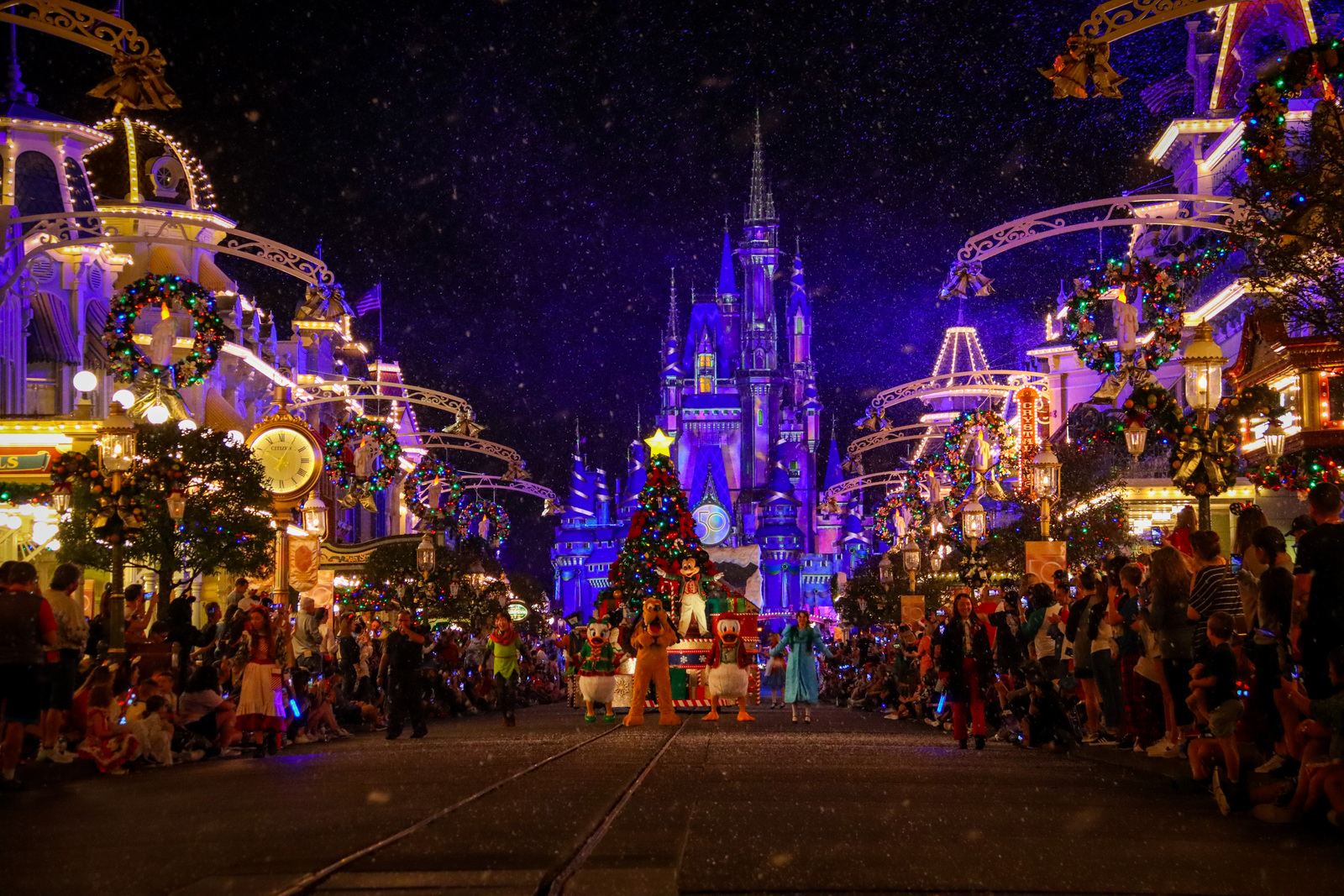 Christmas at the Magic Kingdom
Disney's Magic Kingdom in Florida held a version of Mickey's Very Merry Christmas Party in the form of a reduced capacity after hours party. Photo by Matt Cook

The holiday season is popping at amusement and theme parks everywhere this year, making up for a rather dark season last year. Here's a look at some of the celebratory events.

At Dollywood in Tennessee's Smoky Mountains, from November 6th to January 2nd, a solidly performance-oriented celebration includes a colorful seasonal light display with beautiful LED lights; the festival's headline performance of Christmas in the Smokies, performed indoors at the Celebrity Theater;  the popular ‘Twas the Night Before Christmas performance; and the newest show, Heart of the Holidays held in the DreamSong Theater and showcasing songs from Dolly Parton's own A Holly Dolly Christmas album, and O'Holy Night. Also taking place is a live nativity performance. Along with these shows, musical celebrations include a Southern Gospel Christmas with the Kingdom Heirs, Dollywood's Smoky Mountain String Band, carolers, and more thematic musical acts throughout the park. 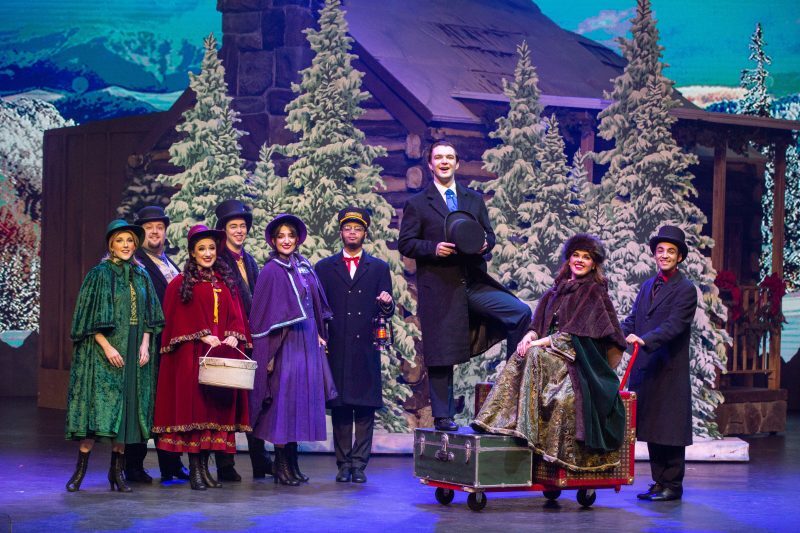 In Skyforest, Calif. Skypark at Santa's Village also hosts Santa's visits at the revamped hybrid adventure and theme park from November to January 2nd. The park offers ice skating on an outdoor pond at Silver Bells Arena throughout the winter, cookie decorating and crafting with a bevy of Santa's elves, the ability to mail your own letter to Santa, and various performing Northwoods characters. At night, the village itself and trees are alight; morning hours include Breakfast with Santa and tea with Mrs. Claus.

In Florida, Universal Studios Orlando has its own Macy's parade, replete with holiday floats and Shrek, as well as a visit from Santa. Christmas concerts including Mannheim Steamroller, The Blues Brothers Holiday Show, Marilyn Monroe and the (Holiday) Diamond Bellas are also a part of the festivities. Park guests heading over to Seuss Landing will find the Grinchmas Wholiday Spectacular show. Grinchmas and other holiday events run November 13 to January 2nd.

At Universal Studios' Hollywood location, with COVID-19 rules in place, the seasonal celebration focuses on Harry Potter as well, with The Magic of Christmas at Hogwarts Castle light show and music; holiday décor, food, and seasonal merchandise, and a west coast appearance of the Holiday Frog Choir. As in Orlando, the Grinch appears for Grinchmas along with a tree lighting and faux snowfall. 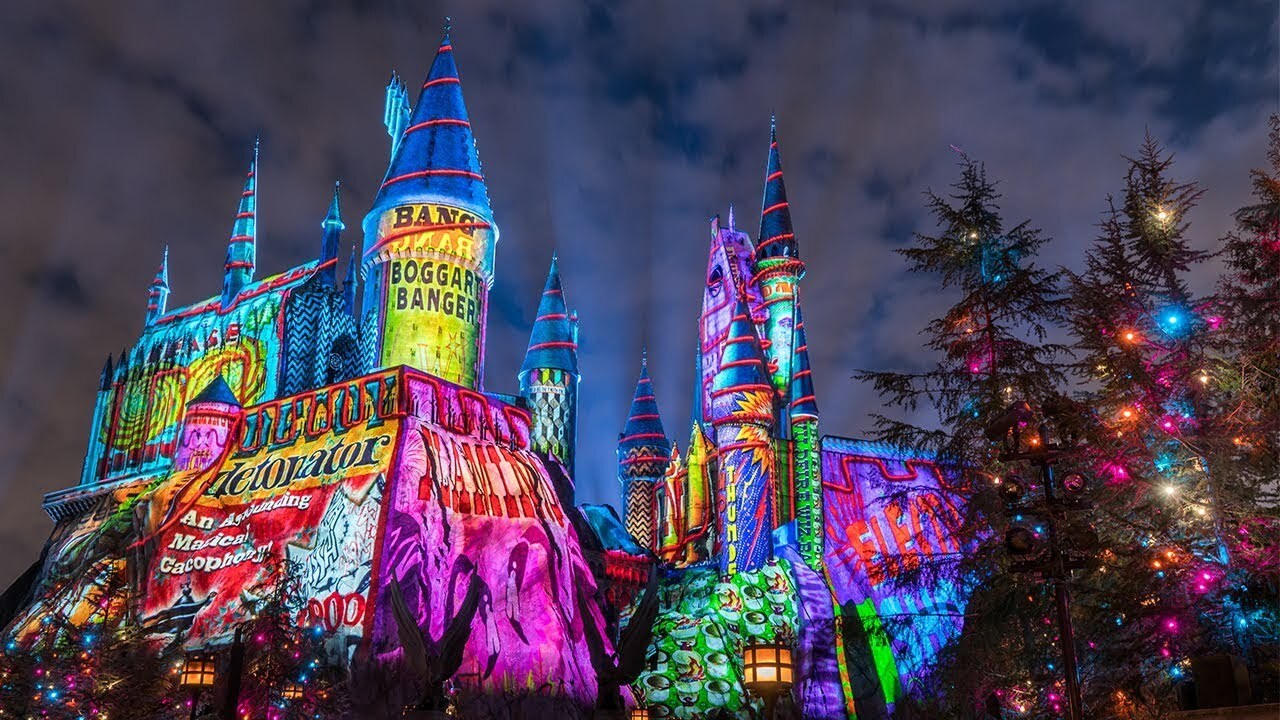 Six Flags Over Georgia has some new holiday attractions for 2021 including a Holiday Spectacular Christmas tree brought to live with animated dancing lights and choreographed to music; the sparkling lights of Merry Lane walk through; and a magical train ride taking passengers through a variety of seasonal traditions. Returning are themed holiday neighborhoods and a glowing candlelight carousel through January 2nd.

Six Flags Great America in the Chicagoland area features live performances such as character storytelling, a light show, dancing elf performances, and the Wonderland at the Grand holiday revue. A Kalightoscope Light Show offers plenty of dazzle through December 30th.

At Santa Springs in Dundee, Ill., there's an immersive drive-through experience for the holidays. Some 2-million synchronized holiday lights, live animals, Santa, plus the ability to purchase hot chocolate and funnel cakes are a part of the drive-through event which runs through December 19th.

Santa also holds sway at Santa's Village in Jefferson, N.H., where featured attractions include a Reindeer Rendezvous and Elf University, the latter of which offers a park-wide scavenger hunt that features elves. Rides such as The Great Humbug Adventure, Reindeer Carousel, and Christmas Ferris Wheel are well-themed for the celebratory season. Santa's Christmas Lightshow plays outdoors, while a 3D Christmas film, A Tinkerdoodle Christmas entertains at an indoor theater. Events run through December 31st, when a Partybration event welcomes the New Year.

Legoland Resorts California includes a Lego Christmas tree, twinkling lights, and a Kid's New Year's Eve celebration with an early evening fireworks display for the holidays. Kids can play in real snow and enjoy the fun through January 2nd.

SeaWorld San Diego has a brand-new Christmas cirque performance as well as appearances by Santa and Rudolph, a Sesame Street Christmas experience, a music activated light tunnel and a 30-foot Christmas tree among other decorations, through January 2nd.

And at SeaWorld Orlando, guests experience the Sesame Street Christmas Parade, meet Santa and Rudolph, and settle in for an ice-skating holiday performance, Winter Wonderland on Ice, also runs through January 2nd.

Christmas at the Magic Kingdom

Disney's Magic Kingdom in Florida held a version of Mickey's Very Merry Christmas Party in the form of a reduced capacity after hours party. Photo by Matt Cook