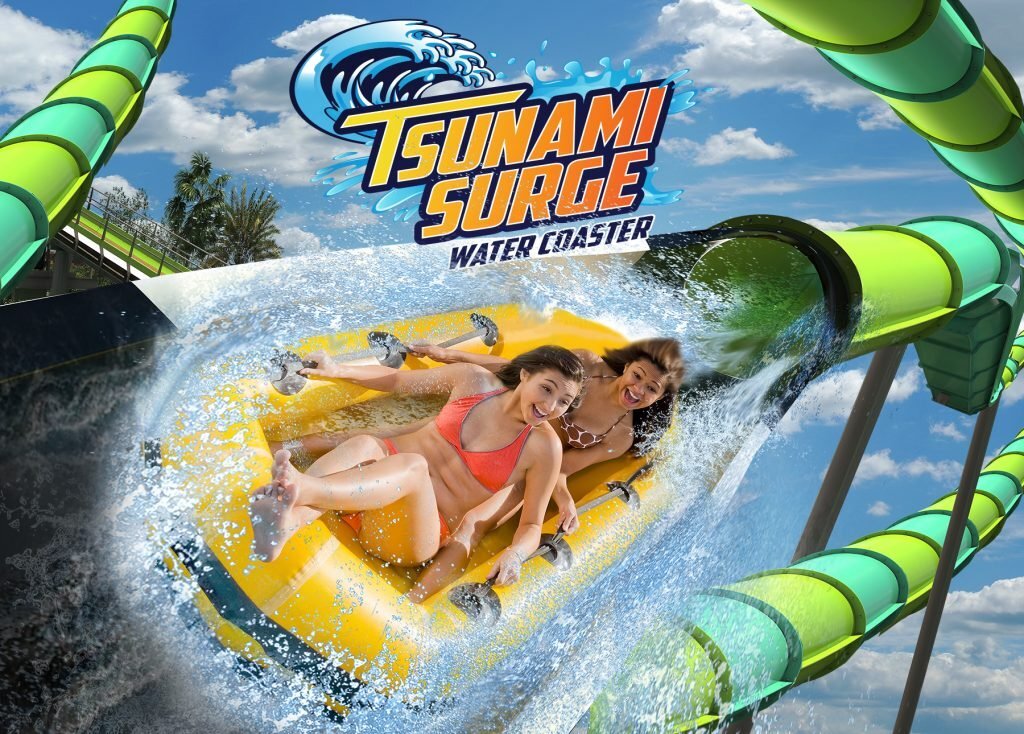 GURNEE, ILLINOIS - Hurricane Harbor’s reopening serves up a major wet storm with its new water coaster, Tsunami Surge. The park asserts it’s the tallest water coaster worldwide. The ride rises 86-feet in height and reaches a speed of up to 28 miles per hour through a series of open-air slides and enclosed tunnel sections. It features five impressive drops, and a variety of hairpin turns. The experience is heightened by AquaLucent visual effects, with the effects’ addition of multiple colors and patterned lights to the ride.

The ride was there to greet attendees as the park reopened on Memorial Day weekend; according to Six Flags communications and marketing manager Caitlin Kepple, “Memorial Weekend is always the unofficial start of summer here.”

“We’re really excited for a new way for our guests and new visitors to experience the water park,” Kepple says. “In the past, guests would have had to have a ticket to Six Flags Great America and then purchase an upgrade to Hurricane Harbor…For those that are Six Flags Great America season pass holder or members, their lives are not changing. For members and passholders, there will be no upcharge to visit the second gate, nor will there be an upcharge for sister park Hurricane Harbor Rockford.”

She continues by saying the idea for the separate entrance was guest-driven. “Something that came through to us from feedback from our guests was that they really wanted the opportunity to visit the water park on the hot summer days…Midwesterners love their summers, and this is a new way to experience Six Flags Hurricane Harbor…to have the thrills that are within the water park without having to visit the theme park,” which they can do on a different day.

Hank Salemi, Six Flags’ park president adds “We want to provide our guests with the best value and experience for their money. Our guests often tell us that they would like the convenience and flexibility to only enjoy Hurricane Harbor Chicago, one of the world’s best water parks, during their visit, and now there is that option with a single-day ticket.”

Rising to a to a record-breaking-height that carries guests eight stories in height, Salemi says the water coaster is “in a class all by itself, defying gravity to blast riders uphill through 950 feet [in length] of exhilarating drops, twists and turns,” calling it the “perfect complement” to the waterpark’s opening as a separate Six Flags location.

Kepple notes that “This was the first new attraction in Hurricane Harbor in a decade.”

Tsunami Surge was supplied by WhiteWater West. Six Flags came to WhiteWater presenting as their goal the creation of the world’s tallest water coaster, one that would be a centerpiece attraction.

Andrew Mowatt, WhiteWater’s executive vice president, Global Key Accounts, was enlisted on the project, in which Six Flags as a the company worked closely with Whitewater, as Salemi says, “every step of the project from conception to design to construction on this unique attraction.”

In turn, Mowatt wanted to bring an attraction to the park that had the same scale as the new Maxx Force roller coaster Six Flags added to their side of the park in 2019. “We…worked with them to create a water slide with similar bragging rights. Now Six Flags has the world’s tallest water coaster, alongside North America’s fastest launching roller coaster,” he enthuses.

Kepple points out that “Unlike your traditional water slide, this water coaster will actually take riders uphill.” Riders 48-inches or taller can choose to ride either single or double. The attraction uses low velocity but high flow rate water jets.”

Visitors can observe the ride’s presence from either the Six Flags or the Hurricane Harbor entrances. Salemi says this was no accident. “When considering the placement of new capital, we always consider how to maximize the space available to showcase the thrills and physical attributes of an attraction.”

The park had planned to install the attraction in 2020 and was fortunately already working on it before lockdown took place during the early months of the pandemic. The fiberglass elements of the attraction went into the air just in time, standing as a promise of the attraction’s thrills to come. The Tsunami Surge’s color theme is lime green and turquoise, and it towers over all the other water slides in the park, with its unique uphill sections clearly visible. “The colors are bright and fun and have that Caribbean vibe,” Kepple states.

The attraction’s visual oomph goes beyond the exterior. Inside the waterslide, the AquaLucent rings and lasers are carefully placed to add unexpected busts of light and color that fit well at particularly thrilling spots in the ride. The sense of visual movement that the lights create increase the sense of speed for guests.
Meanwhile, in Rockford, Ill., Six Flags’ Hurricane Harbor Rockford also offers a new ride, the  Tidal Wave, the first tailspin waterslide in the Midwest. This ride allows guests to take on riding waves and offers slope downturns rising from 43-feet above ground.

And in other waterpark news, Santa’s Village Azoosment Park’s Santa Springs water park, recently reopened with cabanas at the Harbor Hideaway by the two-story Lighthouse Harbor, and two new slides, both three-story and 300-foot long, titled the Caribbean Curl and the Peppermint Twist. General admission tickets there are $27.99.

And in Yorkville, Raging Waters, considered Illinois’ largest, has a new attraction: the Aussie Mat Dash. The six-lane water slide offers mat racing and is the first Proslide RallyRACER attraction in Illinois. It is also just one of three world-wide, where riders can race each other. General admission tickets for adults, and children over 42 inches in height, are $34.99, tickets for smaller children are $19.99. 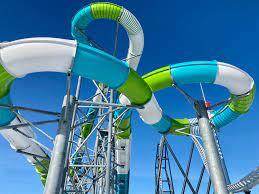