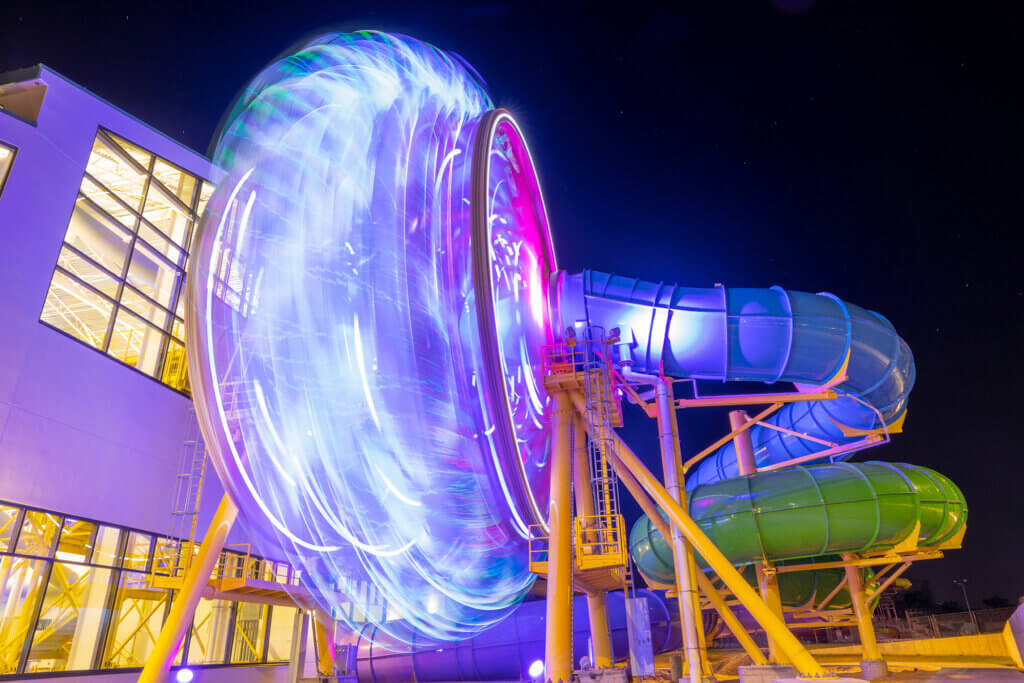 Medusa's Slide Wheel Opened at Mt. Olympus Water & Theme Park in Spring of 2022
The water wheel slide is the first of its kind in the USA and can be enjoyed by guests all season long.

Planning took years, but at last, the Mt. Olympus Water & Theme Park Resort has opened. The expansion cost $23 million and added 22,500 square feet to the park.

Along with the extra room, the “splashiest” addition is the first rotating water slide in North America. CEO and owner Nick Laskaris, jumped on a licensing deal between WhiteWater West and German water slide supplier Wiegand Waterrides in 2018. The award-winning SlideWheel is described by WhiteWater's Exec V.P. of Global Accounts, Andrew Mowatt as “...a ‘revolutionary' new attraction for Mt. Olympus and the water park capital of the world.”

Laskaris revealed plans in 2019 to install the slide, the first in North America. It was scheduled to be in place by 2020. The pandemic got in the way, but it's arrival has been even more anticipated, if anything. 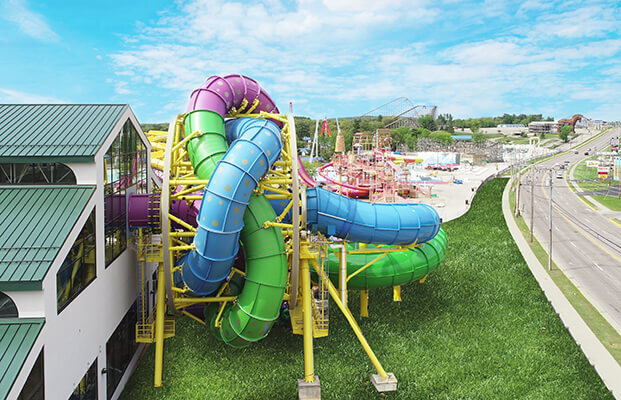 The SlideWheel is a water slide that rotates continually. The enclosed attraction is described by its manufacturer as having been inspired from a vision of a rotating waterslide described by a six-year-old boy in Switzerland. Wiegend Waterrides patented the idea and spent years developing a variety of concepts before executing the current design, making it a unique piece of contemporary engineering.

The ride takes park guests on four-person rafts which move through the slide due to the wheel's propelling rotation, as well as that of the water moving through the wheel itself.  The wheel has a diameter of 100-feet and rotates three times per minute. After riders climb aboard the raft, an automatic conveyor moves it into the wheel.

Once in the wheel, riders will experience forward and back oscillations as well as a zero-gravity sensation, as the raft itself moves through brightly colored sections in the slide. Along with the vivid color palette of the AquaLucent effects, riders will also experience varied translucent patterns and lines.

One raft can enter the wheel every thirty seconds, with a total ride length within the wheel at 90 to 95 seconds. A so-called “tail section” returns rafts to its home building. The ride can hold a capacity of 480 park visitors per hour. 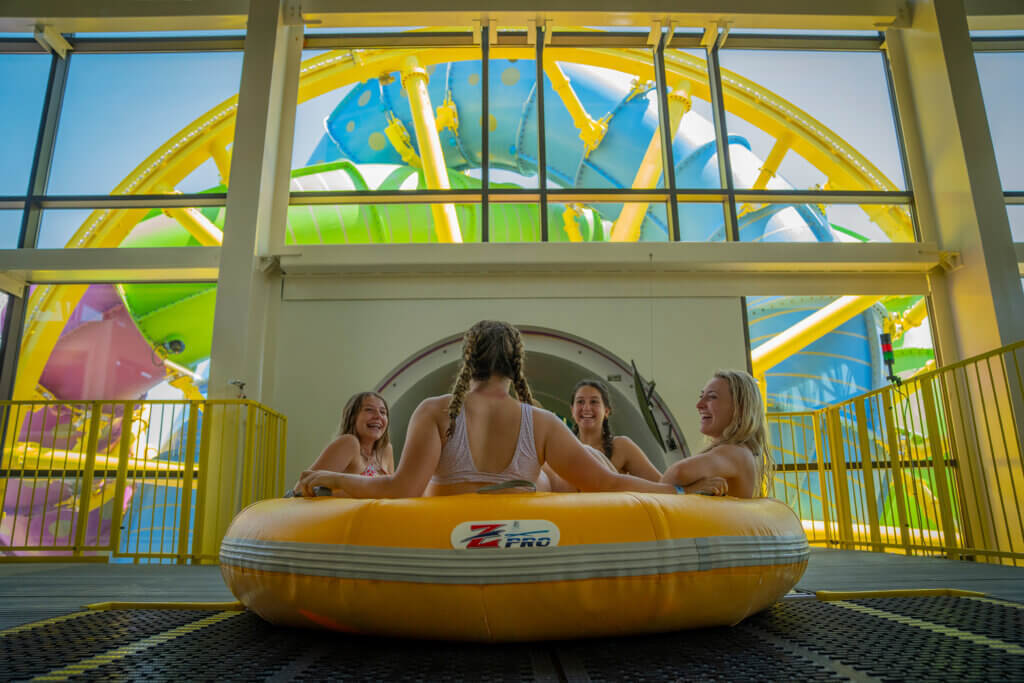 The SlideWheel blends the perpetual movement of a Ferris Wheel with the speed of a waterslide. Positioned on a horizontal axis, speed, g-force, and air are all very much enhanced by the rotation and pendulum motion of the ride, making the experience different than that of any other waterslide. The SlideWheel rises to a height of 74 feet and contains 443 feet of water slide; the final last curving slide path goes an additional 390 feet.

Named Medusa's SlideWheel, Laskaris describes the ride as “super cool - everybody's got to try it.”  The park owner and his family's belief in the innovative ride is the latest in many water and theme park innovations that Laskaris has overseen at the park over the years; innovations that have made it a popular destination for both local and visiting guests.

As to the park's new expansion in size, it has now increased the total amount of indoor, all-weather space to over 60,000-square-feet. A lot of remodeling was also done at the park along with the expansion. For example, the Bay of Dreams indoor water park area was remodeled with updated theming and general improvements, with all the indoor portion now called Medusa's Indoor Waterpark. While the SlideWheel is undoubtedly its focal point, of the expanded indoor waterpark at the resort includes revamping such as a new children's splash zone with fountains, as well as many different interactive water features and a swimming area. 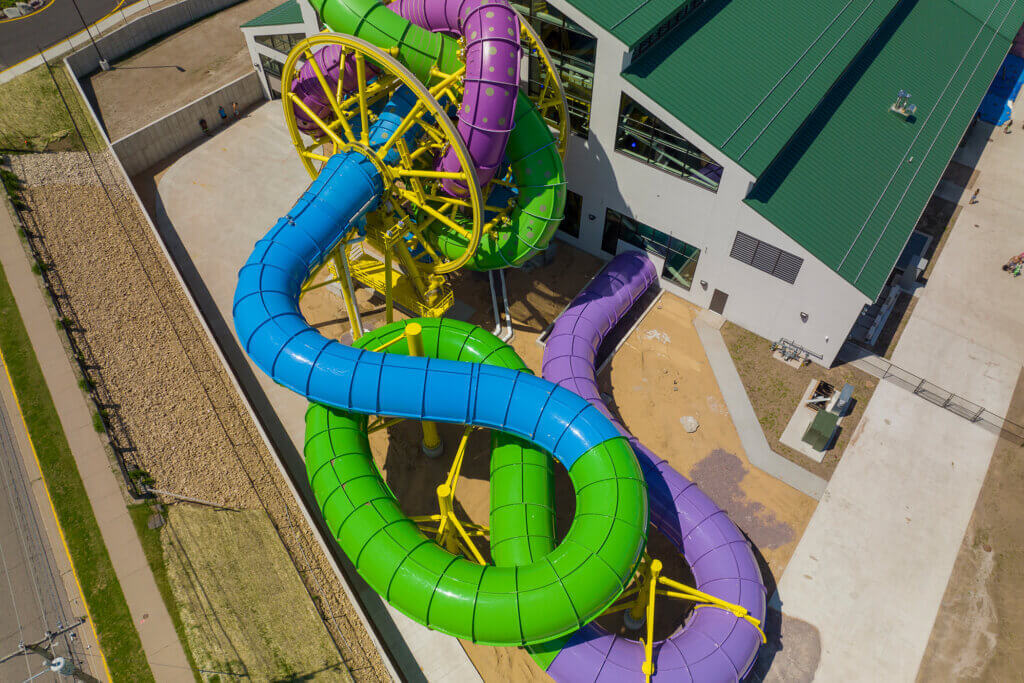 Existing water slides were coated again, with thematic elements added to create the Medusa look. Additionally, the new swimming pool was installed, created by the Wisconsin-based engineering company Ramaker & Associates, a company which has been a part of all the aquatic installations added to the park since 2005.

Laskaris purchased the park back in 2007. Previously called Treasure Island, Mt. Olympus's Greek mythology theme has continued to grow since the purchase. Current park admission is $20. The indoor park is open year ‘round; outdoor attractions are open for the season.

Elsewhere in the Wisconsin Dells, come fall, the indoor Wild West Waterpark at the Wilderness Resort is opening two new waterslides with a competitive feature: both allow racing by guests, one down two-lane tubes and the other via two-lane mat racer which guests go down headfirst. Each includes multiple rally points, spots where the riders can see their competition as they race down the slides. Some sections of the slides will also be translucent. Wild West Waterpark is also adding a new theme to a multiple level play-and-spray structure and renovating its guest rooms. 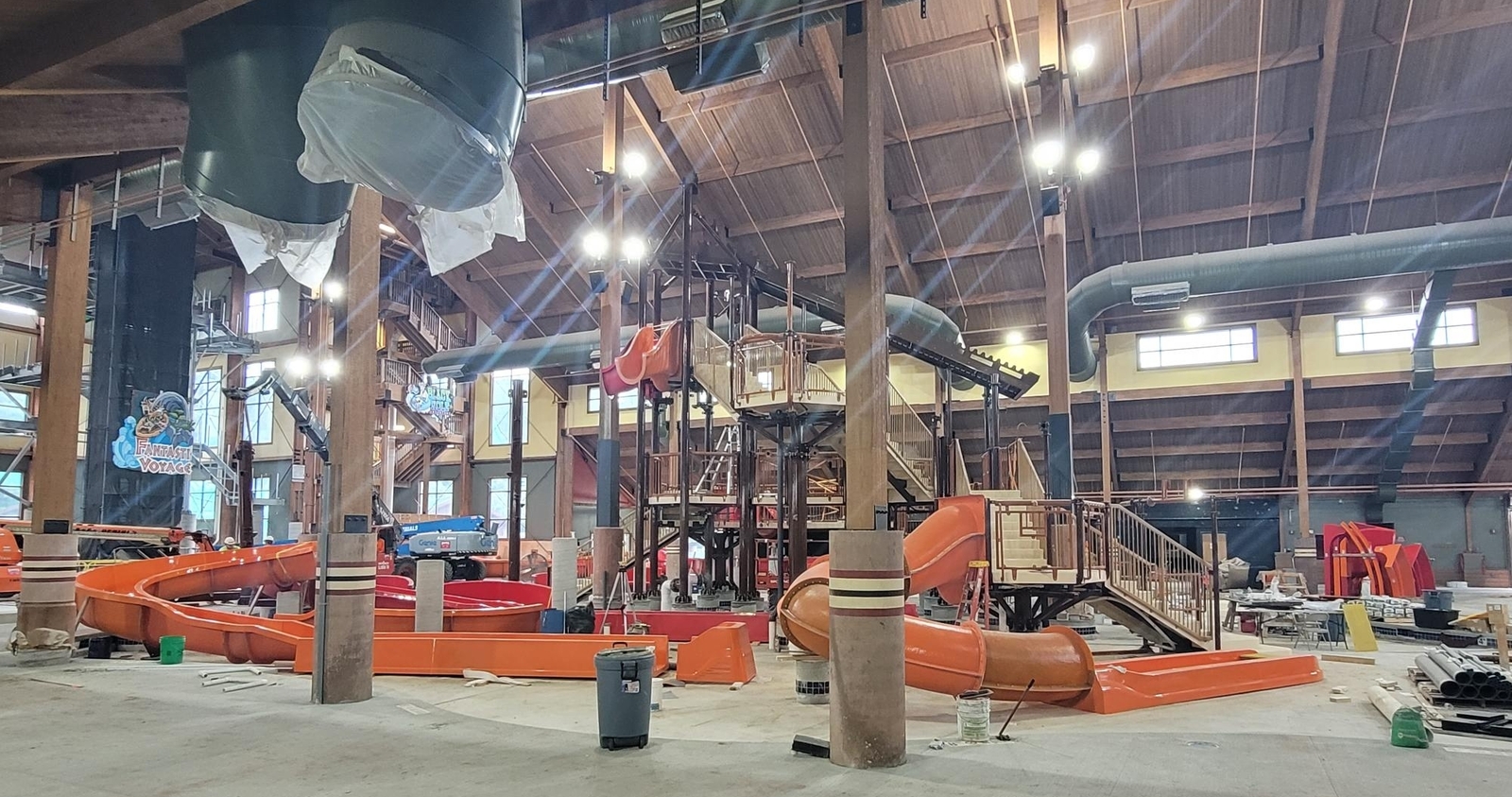 And over at the Chula Vista Resort, that indoor facility is also opening a new waterslide attraction. This ride, ride with a rainbow hue light effect, intersperses a series of brilliant light effects that appear intermittently in an otherwise dark tube.

The Land of Natura adventure park is also opening its first phase of hiking and biking trails and floating waterpark, part of a long-term development that is scheduled to take five years to complete. 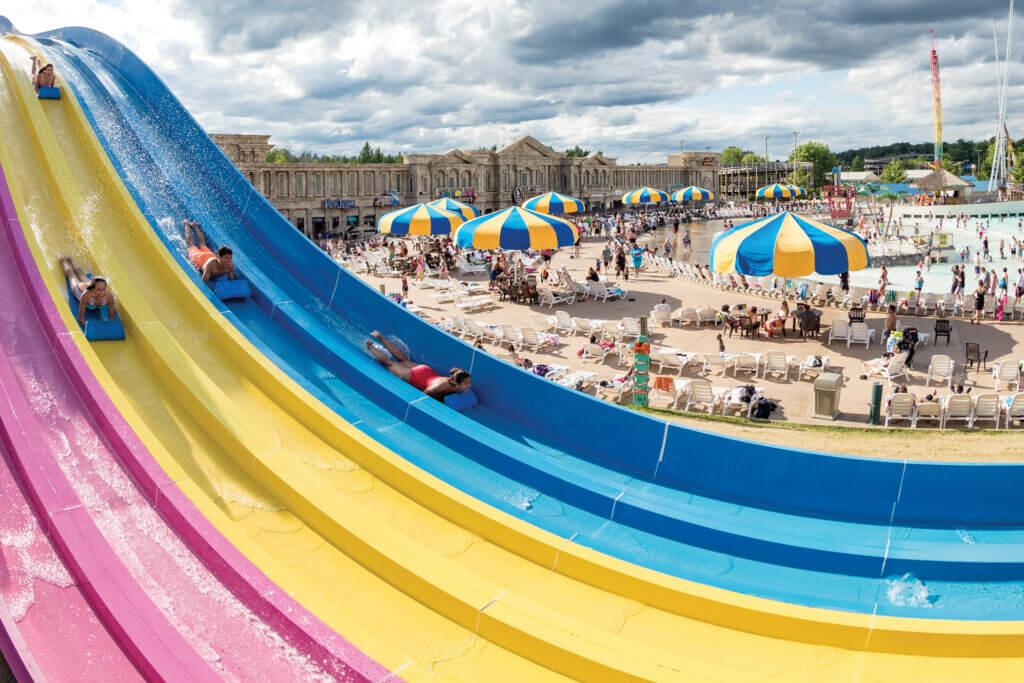 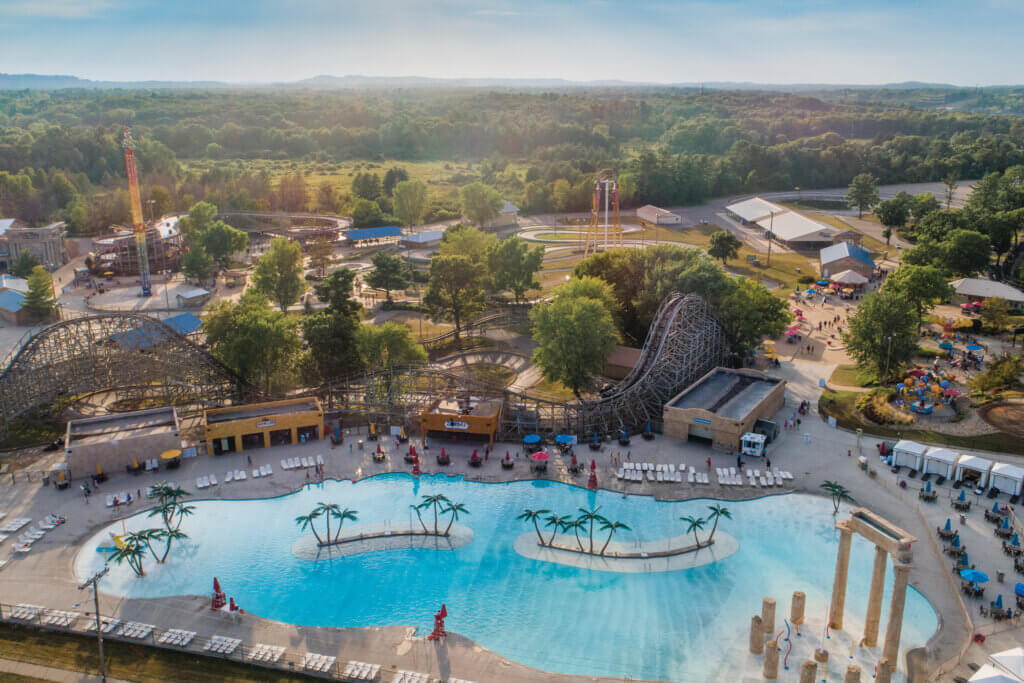 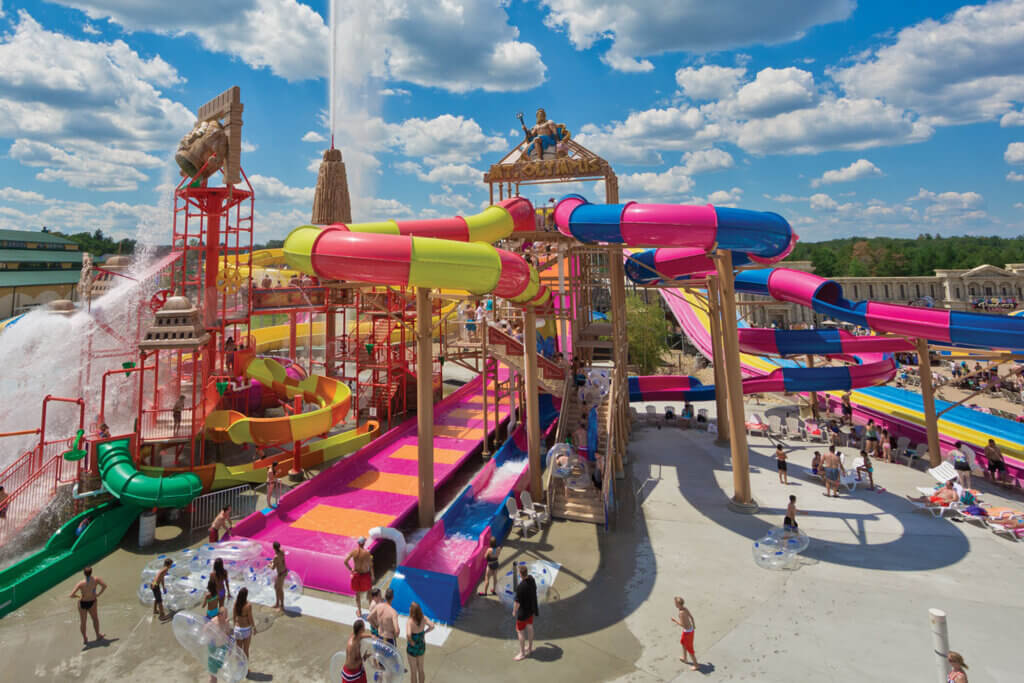 The water wheel slide is the first of its kind in the USA and can be enjoyed by guests all season long.