It's a New Age for Drive-Through and Drive-In Attractions 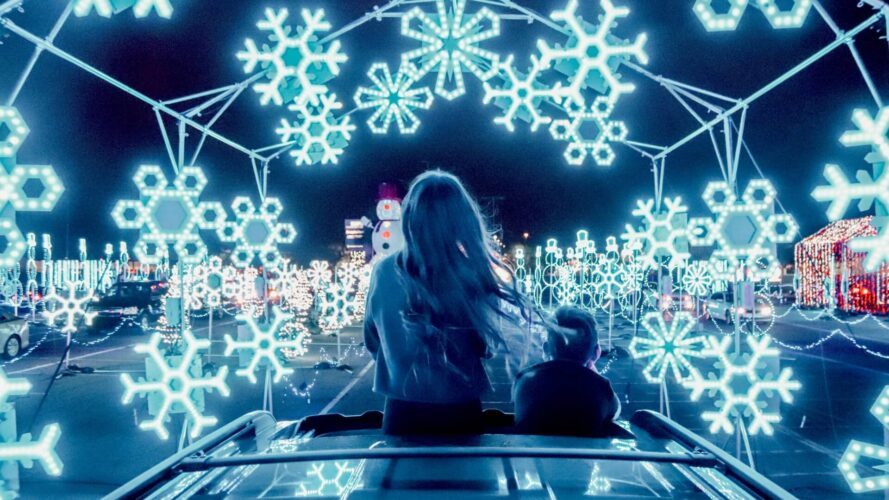 With Universal Studios Hollywood closed for the rest of 2020 due to the COVID-19 pandemic, Universal CityWalk, the adjoining shopping and dining area, is gearing up to fill in a bit of the entertainment gap with a drive-in attraction and screening from Universal Studios and DreamWorks The Croods: A New Age. While the film will open in theaters where they are open in the U.S. and abroad, in the Los Angeles area, indoor movie theaters also remain closed.

The drive-in attraction runs between November 19 and 24th, with the film itself to be shown on a large, LED screen, and guests to receive individual snack boxes. Prior to the film, the drive-through experience allows visitors to see The Croods 2 film locations: their Treehouse, Monkey Lair, and the Thunder Sisters. Photo opportunities – with guests masked when emerging from their vehicles – will also be available. 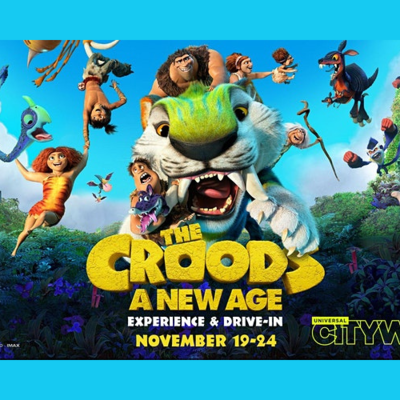 This is just the latest in a series of drive-through events, including many holiday events ranging from an Elf on the Shelf Drive through at the Los Angeles County Fair Grounds in Pomona, Calif., and a holiday lights experience scheduled for Ventura.

The Ventura County holiday festivities will be held on the fairgrounds: the Ventura County Fair Grounds will host the event starting on Sunday November 22nd, with a second location opening at the Del Mar Fair Grounds in San Diego County on December 5th.  Cars will turn off their headlights at the Holidays in Your Car event, and drive through a mile and a half light-show display of LED lights, holiday music, holograms, projections, and a laser light show. Some of the projected images will be over 40-feet in height. The event will carefully follow all state and CDC guidelines. It runs through January 2nd. There will be a live musical theater performance as well on select days: December 12 and 13 in Del Mar, and the 19th and 20th in Ventura. Called Santa Saves Christmas, it's produced by the creators of Rudolph the Red Nosed Reindeer: The Musical and The Price is Right Live. The plot focuses on Santa and elves running out of gas for their sleigh.

Elf on a Shelf in Pomona, Calif., offers interactive elves in their drive-through iteration, which begins November 12th, and includes a gift for kids who write a “letter to Santa” prior to attending. That event runs through January 3rd.
While state and local fairs may have been postponed for 2020 due to the pandemic, Santa is providing a little relief for fairgrounds.

Drive through attractions have been popular since summer, with drive-in family films presented in the Miami, Fla. area's Dezerland Park, and at Six Flags Fiesta, Texas with its Rooftop Cinema Club. The events were in held in June and July. Also this summer, Imagine Exhibitions presented Dinosaurs Around the World, a traveling exhibit of large scale animatronics.

Currently, at Six Flags White Water in Marietta, Ga., another holiday drive-through attraction, World of Illumination's Candy Rush is set to debut. The event will feature synchronized multi-shaded colored RGB LED lights, set to holiday music, animated displays, and what the park is describing as “the largest candy-cane structure” in the world. There is also a light-filled tunnel that leads to Santa, a gingerbread town, and faux snowfall. Viewed from inside attendees' vehicles, this event, too, is made for  pandemic times. According to World of Illumination co-founder Simon Kreisberger, the company focused for months on the best way to provide family entertainment in a safe environment for the holidays. Running from November 20th to January 3rd, the event features over 2-million lights. It's not the only holiday event in World of Illumination's safe, drive-through quiver.

Already opened in Glendale, Ariz., and running through January 3rd as well, is the Rockin' Christmas event, billed as a musical spectacle, a mile-long “sight and sound” experience. And in Tempe, Ariz., starting 11/14 through January 3rd, the Arctic Adventure attraction from World of Illumination will take place at the Tempe Diablo Stadium. There, a 32-foot-tall snowman will hold court, in a polar, storybook setting.

All of the attractions are ticketed and require advance reservations and payment.

And running through February is the downtown-Los Angeles location of Stranger Things, based on the Netflix series. The interactive production opened just prior to Halloween, but is poised to take on the holiday season. In the near future, pairing up with Walt Disney Studios, Secret Cinema is set to work on adaptations of Disney films held as live, immersive experiences. Films will include the Avengers, Tron, and Star Wars, and the experiences will be crafted at Disney's StudioLAB. 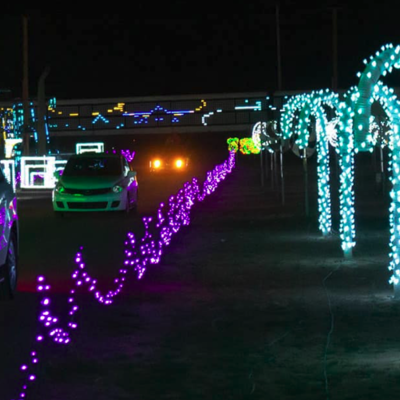