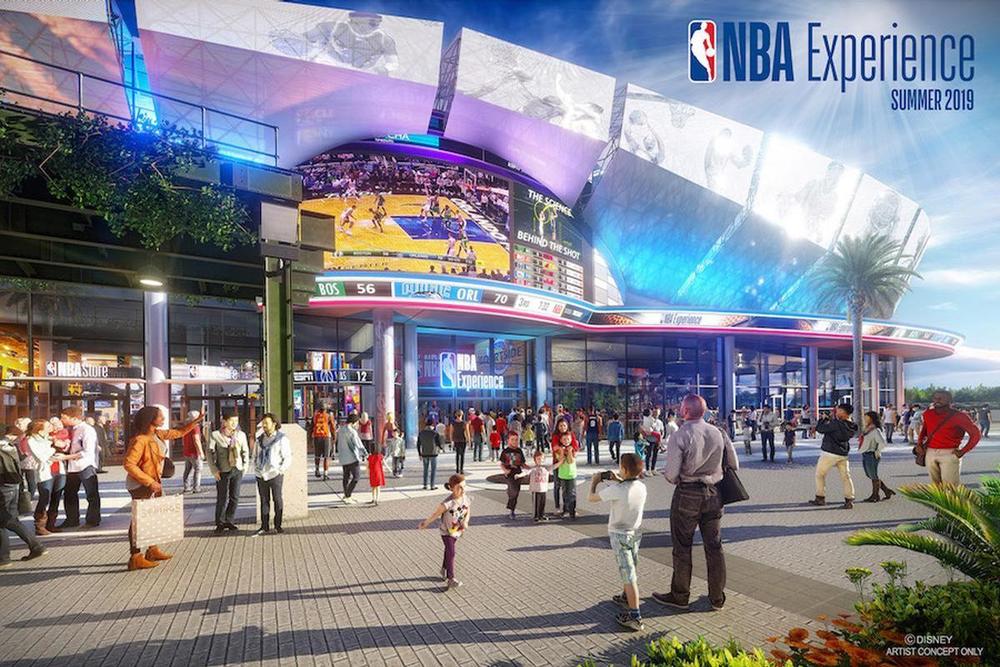 Basketball isn't just a sport any more, it's an experience. Opening mid-August at the Disney Springs leisure and entertainment district in Orlando, Fla., Disney's NBA Experience promises hoops of fun.

Developed by Walt Disney Imagineering in close collaboration with the NBA itself, the attraction will be replacing DisneyQuest. The design alone should have basketball fans excited, as it utilizes the modern architecture of the NBA's 29 arenas throughout the U.S. Inspiration has come from iconic arena locations such as Los Angeles' Staples Centre, New York's Barclay's Centre, and the TD Garden in Boston.

The two-story, 44,000-square-foot attraction includes interactive games and competitions, and what promises to be fully immersive NBA video productions and interactive experiences such as trivia challenges and skills exercises. There will be plenty of photo op spots, social media ready;  a retail store and a restaurant will be adjacent to the main space.

NBA Experience is designed to give visitors not just a look but an interactive experience of the life of a pro basketball player. It will give visitors a hands-on taste of life as a professional player.

According to the president of Global Partnerships at the NBA, Salvatore LaRocca, “The Walt Disney Imagineering team has unparalleled expertise in creating best-in-class attractions for the millions of guests who visit their parks each year…The NBA Experience will be a destination for basketball fans from all over the world…” LaRocca says the NBA is excited to partner with Disney and bring “new and lifelong fans closer to the game.”

The attraction is designed to appeal to basketball fantasies from getting scouted to hitting a jumper that wins the game, with thirteen different activities merging NBA excitement with Disney's magic. The idea is to involve the whole family in the game, as if they were pros.


Visitors will walk through a players' tunnel and step into an impressive replica of a modern-day NBA arena. Over a dozen games and challenges will bring virtually every facet of life in the NBA to players.


Visitors are invited to take on the expertly recreated Combine challenge, get into a slam-dunk challenge, and explore accurate replica versions of the film room and the locker room where current statistics and visuals of top NBA and WNBA players will be displayed.

They'll experience the exciting atmosphere of the NBA Draft, including a photo moment that recreates the draft stage setting. And they'll participate in creating their own scouting reports, go through pregame preparations, and step onto the court, where they'll have the opportunity to make their own clutch shots and slam

dunks. And, as they step onto the court, they'll hear a roaring crowd cheer their actions as they move through a series of timed shots to aim for a high score.

From adjustable baskets and an interactive trainer challenging guests' ball-handling skills through dribbling routines, the NBA Experience proves to be truly interactive.

Visitors can utilize an oversized slingshot to launch basketballs at hoops in a timed challenge to take as many shots as possible before the clock runs out. There's also plenty of history to absorb about both the NBA and WNBA championship teams.

A trivia game allowing for up to 25 competing participants will test their knowledge of the NBA and WNBA – past and present, in a quest to be champion.

And, guests will be able to view two 180-degree film presentations showcasing the in-arena experience moments before the start of the game, and stories from the players' perspectives. A multi-screen module experience is also offered, allowing visitors to watch replay clips from NBA games, using tools at their stations to make the right calls.

From cutting edge video games to the classic Pop-A-Shot, there are a wide range of interactive basketball games, too.

In the retail store, Disney-designed exclusive NBA-themed merchandise will be available for the ultimate take-home souvenir or fan gift.

It's an energizing experience that simulates the feel of making it to the pro leagues; and it's also the just the first step in new ways that are adding to the landscape of entertainment at Disney Springs.

Senior Vice President of Disney Springs and ESPN Wide World of Sports Complex Maribeth Bisienere says “We are inspired by the design of the new building and the energy it will bring to the West Side of Disney Springs.”

As a prelude to the highly- anticipated August opening – which will arrive just a few weeks before the debut of Star Wars: Galaxy's Edge at Disney's Hollywood Studios – Disney guests who purchase or renew Walt Disney World annual passes at Amway Center this year will receive a hometown Orlando Magic basketball jersey with Disney logo, while promo supplies last.

But the big slam dunk is course the NBA Experience.


While the NBA Experience is first-of-its-kind, it isn't the first NBA-themed spot in an Orlando theme park. Now closed, Universal's Orlando CityWalk once housed NBA City, a themed restaurant. That was replaced in 2016 with the Toothsome Chocolate Emporium & Savory Feast Kitchen.