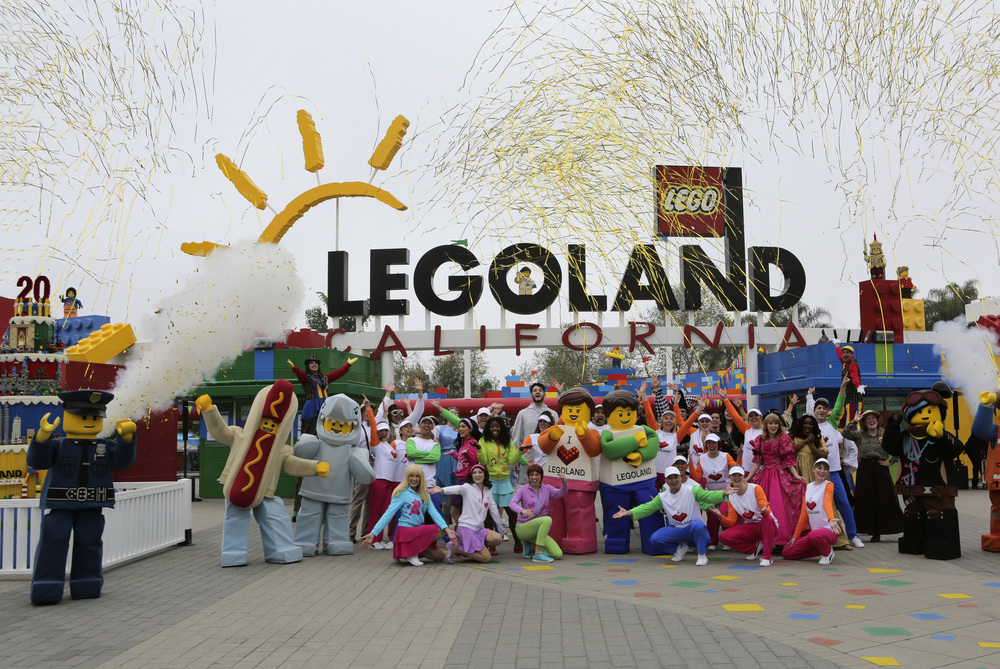 Legoland California is celebrating its 20th year in 2019, and all year long they have  been inviting kids 12 and under to celebrate their birthdays at the park for free. At a big celebration for the park itself on March 20th, guests were invited to sing-alongs, to learn new dance moves, and interact with LEGO characters, stilt walkers, and share a slice of a 10-foot-long LEGO birthday cake. A non-edible cake was created from a design of more than 100,000 LEGO bricks designed to show a variety of attractions at the park from the LEGO Submarine – the park's newest ride, to Star Wars themed figures. Live characters on hand included Emmet, Lucy, and more from The LEGO Movie 2.

The park also distributed free child-size Minifigure hands to the first 1,000 kids entering the theme park. The celebration continues all year, with a LEGO Friends birthday show, birthday desserts, and an interactive dance party playing daily through the 1st of September. In the food offerings, a birthday-themed milk shake is one of the celebratory creations.

Since opening in 1999 with 12 rides and Miniland U.S.A., the park has continued to grow, now featuring over 60 rides, shows, and attractions, as well as an adjacent  aquarium, a ten-acre water park, and two interactive Lego-themed hotels.

The LEGO Movie 2 Experience is another new addition to the park, from characters to mini-sets based on those in the film, allowing visitors to feel as if they are inside the movie's actual sets. There's Bianca's room, the basement, and more that are a part of the attraction. Bianca's room includes the cake palace and DUPLO city she was seen to be building in the film itself. Also viewable are Queen Watevera Wa-Nabi and masked space pilot General Mayhem. The attraction includes over 500,000 LEGO bricks and also gives viewers a look at Apocalypseburg and models from the film's Systar System. Guests can stand in the same places as characters from the movie.

Even newer, at the park this summer, guests can enjoy the LEGO CITY 4D: Officer in Pursuit attraction which offers guests mini-figures and adventures at the LEGO Showplace Theater. The 4D film includes an engaging chase scene between the police and a mischievous crook as they traverse the streets and buildings of the city. Viewers experience wind, water, and bubble effects.

Perhaps the crown jewel of the new LEGOLAND attractions is the interactive DUPLO PLAYTOWN area, added to the section of the park called The Ridge. A new train ride tours this section of the park. Opened May 9th, the immersive experience includes play structures and the LEGOLAND Express train ride. Kids can hide, slide, and board the mini-locomotive. The opening ceremony for the attraction, which is aimed at kids age five and under, included a ribbon cutting, balloons, and streamers. The opening event hosted over 30 families from the Southern California and San Diego chapters of Ronald McDonald House Charities ; they were feted with train conductor hats and commemorative buttons, and the park itself donated $80,000 to San Diego and SoCal Ronald McDonald House Charities.

According to LEGOLAND California resort general manager Peter Ronchetti, “The support of LEGOLAND California's contribution and our entire partnership helps us continue our mission to take care of as many families as we can, and to keep families close.”

DUPLO® Playtown features ten playhouses with whimsical themes, featuring a variety of hands-on activities such as slides and elements that encourage creative play. There's a barn, fire station, hospital, grocery store, maze, and in that maze, an interactive scarecrow. The Playtown area is directed at the smallest visitors, and fills a need for toddler-based activities. The gentle LEGOLAND® Express Train Ride is designed to serve as a “first time rider” experience. The train passes by a LEGO-built cornfield and farmer, and other figures engaging in activities that mirror the play areas.

For the older siblings, the Kid Power Towers in the middle of DUPLO® Playtown should keep them busy. Both kids and parents can ride to the top of one of three towers for an expansive view of the theme park, and then experience a “free-fall” drop to the bottom. Tall, bright, and colorful, and, despite the descent, this a family ride, not a thrill-ride experience and geared towards kids and parents strong enough to hoist themselves to the top via pulleys. Riders are seated on a two person lift.

For kids 9-13 the Mindstorms/Robotics headquarters teaches kids about automation, mechanics, motors, wheels, and even computer codes. The interactive hands-on work stations are focused on designing and creating “the magic of robots” according to the park, which calls the educational attraction one that “enhances STEM education.” Guests sign up ahead of time or check available time slots once they enter the park.