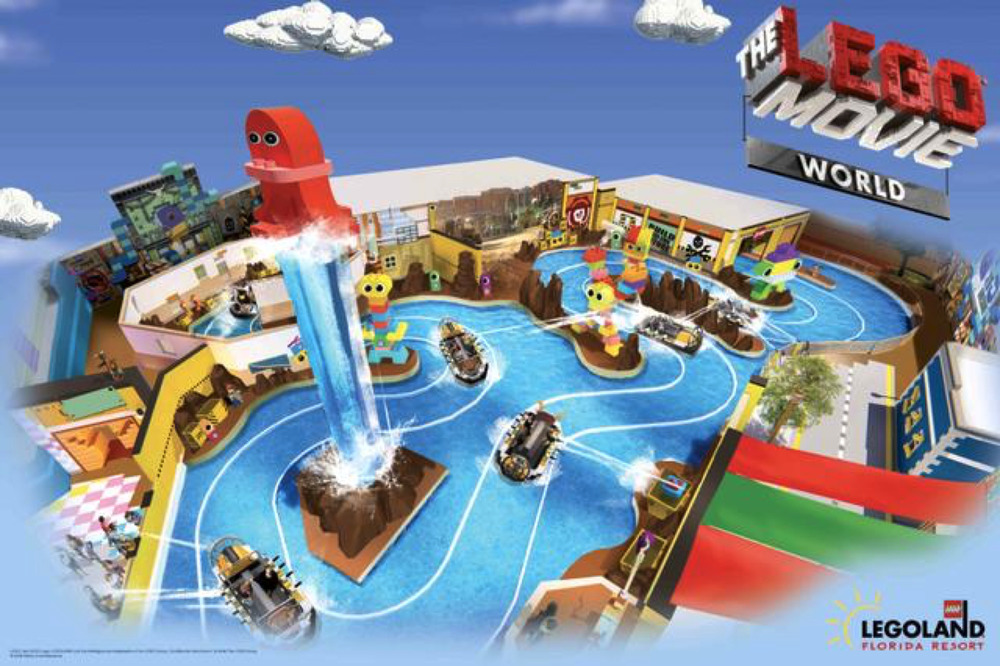 In plenty of time to capitalize on The Lego Movie 2: The Second Part, releasing in theaters in early February, Legoland Florida Resort is opening The Lego Movie World, in partnership with Warner Brothers Consumer Products. The new expansion opened March 27th.

Using the themes, settings, and characters from the animated feature films, The Lego Movie World will feature the films’ Bricksburg, in an authentic city recreation that allows visitors to explore lead film character Emmet’s Super Suite, among other attractions and rides.

Merlin Magic Making is behind the new world’s creation. Project director Keith Carr asserts that the attraction is their largest to date, and will create a fully immersive movie to theme park experience, where visitors can “interact with various characters, enjoy ride technology that’s the first of its kind, and dine on tasty tacos…not to mention, we have a spaceship playground…”

Among them are The Masters of Flight, Unikitty’s singing and spinning ride where the kitty’s ever changing emotions dictate the ride’s look; and the immersive Battle of Bricksburg, themed around large-scale Lego Duplo aliens.

Emmet, Wyldstyle, and all the stars of the original The Lego Movie will make character appearances throughout the new expansion. The Lego Movie World is taking over what was once The World of ChimaLand, with the currently-closed The Quest for CHI ride re-themed as Battle of Bricksburg.

“With great partners in Warner Bros. we’ve developed a park that will bring a lot of smiles to children and their families,” Jackson says.

While the Florida park will be the only place to experience The Lego Movie World for now, rumor has it that Legoland California will soon explore adding their own version of the world.

In the meantime, a Florida visit seems in the cards for Lego movie fans of all ages. Three main rides will entertain guests in the new themed area.

The Lego Movie Masters of Flight ride will soar guests on a suspended theatrical ride aboard Emmet’s Triple Decker Couch. They’ll be surrounded by a full-dome virtual screen, creating the sensation of flying through a Lego brick world.

The ride is a first of its kind, not only at Legoland, but worldwide, embedding a 180-degree turn in the experience that should be thrilling for guests. Animation promises to include Cloud Cuckoo Land, Middle Zealand, and a splash-down in Pirate’s Cove. This flying-sensation theater attraction will feature familiar characters from the first film, as well as new faces like Sweet Mayhem, a character in the about-to-release second film, The Lego Movie 2: The Second Part.

Unikitty’s Disco Drop will also be lighthearted, as riders are carried on a rainbow colored journey through Unikitty’s changeable moods. The child-friendly tower ride will lift guests to the peak of Cloud Cuckoo Land; dropping and spinning back to earth again for family-friendly thrills featuring a vibrant color palette.

Battle of Bricksburg will be the only water ride in The Lego Movie World. Riders will board boats, and then attempt to stop invading Duplo aliens from stealing Lego bricks by spraying water at targets. The riders won’t be alone in water spray battle fun; along the edges of the ride, guests can spray the aliens as well to help the riders save the Lego bricks and the day.

Food has not been forgotten in The Lego Movie World, either. At The Taco Tuesday Everyday eatery, guests will be offered casual fare in a setting every taco and Lego lover will enjoy. And of course, there’s a retail option, too. That would be The Awesome Shop, packed with take-home Lego movie-themed collectables.

Kids can burn off steam at a lively space-themed playground structure that’s inspired by film character Benny’s spaceship. The playground will also offer numerous character visits and photo ops throughout the day. More characters will drop by and interact with guests at the downtown Bricksburg location of Emmet’s Super Suite, where guests can spend time with Emmet and his friends inside a careful recreation of the character’s apartment.

Park annual pass holders will be among the first to experience The Lego Movie World when it opens this spring.

Overnight guests will be in for an additional treat.

Paired with the new world’s opening, there will be a new The Lego Movie World themed rooms at the park’s adjoining Legoland Hotel. The beautifully detailed junior suite-styled spacious accommodations will feature a bedroom styled after Emmet’s for adults, with king-size bed, lounge area, and television. For the kids, there’s a Benny’s Spaceship themed area, with a pull-out trundle bed, a bunk bed, and a television showing Lego movies. Regardless of what rooms visitors choose, the Legoland Florida Resort hotel is offering The Lego Movie World vacation package, which promises useful perks for visitors.

Legoland VP of marketing and sales Gillian Smith notes that the rooms are designed to “mirror the whimsical fun and vibrant imagination that kids love so much from the popular Lego movies.” The idea behind them is to allow guests to continue the immersive sensation of The Lego Movie World, essentially allowing them to relax and sleep inside a continuation of it. The vacation package featuring The Lego Movie World rooms will be available to park guests starting April 9th. Along with staying in the themed rooms, guests will also receive amenities such as one skip the lines pass per person valid for one attraction within The Lego Movie World. They’ll also get free valet parking, free breakfast, and perhaps best of all for the kids and adults – an in-room S’mores kit. Both the rooms and tickets for the park are available for booking now.