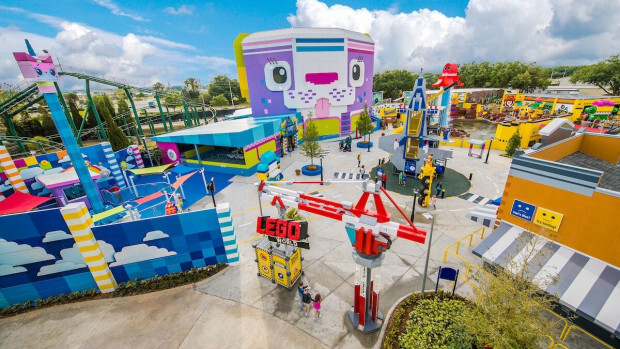 According to Legoland California Resort general manager Peter Ronchetti, Masters of Flight will be the flagship ride of this land. Kids will interact within Bricksburg, on a ride that will be “taking the traditional soaring type of ride to new heights.” The flying theater ride comes from Brogent Technologies. The attraction allows riders to travel on Emmet's flying sofa. The ride features a full-dome virtual screen. Riding on the sofa, guests will soar over Cloud Cuckoo Land, Pirates Cove, and into Outer Space.

The family-friendly drop ride Unikitty's Disco Drop is another featured attraction, one that will take visitors to the peak of Cloud Cuckoo Land.

Then there's Benny's Play Ship, a space-themed playground area suited for small park guests with a twirly tunnel of a slide.

Queen Waterva's Carousel is a 60-horse ride, while Build Watevra You Wa'Na Build, is a LEGO brick building zone for guests to build away. Emmet's Super Suite rounds out the attractions in the new land. Here, guests will meet the land's central character, Emmet, and his friends.

Food and beverage offerings like sweet treats will be served at Cloud Cuckoo Crepes; main dishes are served at Everything is Ramen! which features homemade noodle dishes. Benny's Blaster Slushies offers a selection of drinks.

Souvenirs can be sourced at the Awesome Shop, where guests can purchase Movie World themed T-shirts, cups, and of course LEGOs among the offerings.

Overall, Ronchetti describes Lego Movie World as “an interactive family experience that fully immerses guests into a world created by Lego.” The land was originally slated to have a 2020 opening date, which was postponed due to the COVID-19 closure of the park itself. The first Lego Movie World opened in Orlando's Legoland Florida Resort in March 2019, where it has proved a popular attraction. 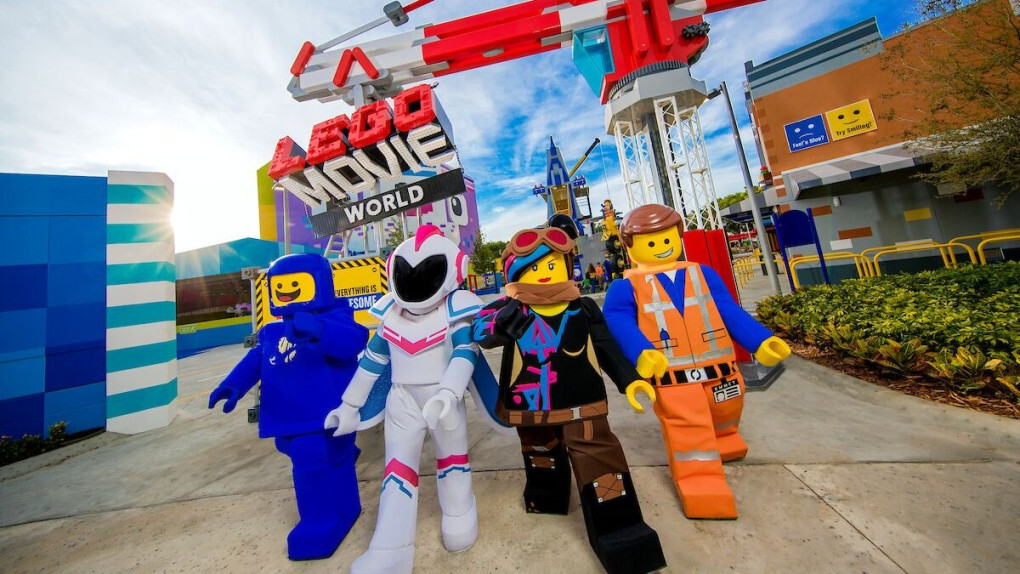 Single day theme park visits in Carlsbad start at $79.99; season passes begin at $179.00. Reservations are required, and presently the theme park is open for California residents only. Out-of-state guests must present valid identification and proof of COVID-19 vaccination completed a minimum of 14 days prior to entering. The park has cashless payment and social distancing set up for guests.

In another movie-centric attraction, at Universal Studios in Orlando, the Jurassic Park franchise gets a new rollercoaster. Scheduled to make its debut June 10th of this year, the Jurassic World VelociCoaster presents a series of firsts for the theme park. It will be Florida's fastest and tallest launch coaster, and as such, guests will travel 155 feet up in the air at speeds of 70 miles per hour. They'll be racing a pack of velociraptors known as Blue, Charlie, Delta, and Echo from the Jurassic World film. The ride comes from Universal Creative and was designed and conceived in a collaboration with Universal Pictures and Amblin Entertainment. The immersive environment of this “story-coaster” – similar to Hagrid's Magical Creatures Motorbike Adventure, which opened at the park in 2019, will include characters voiced by Chris Pratt as Owen Grady, Bryce Dallas Howard as Claire Dearing, and BD Wong as Dr. Henry Wu. Landscaping including rock features add to the immersive atmosphere. Riders will first meet Dr. Wu, and board ride vehicles traveling along 4,700-feet of track. Along the way, they'll experience a 360-degree barrel roll positioned above the lagoon at Islands of Adventure, high-speed launches, the fastest of which will reach 70 miles per hour in 2.4 seconds, and a zero-gravity stall. They'll also thrill to  the “top hat,” which is where guests will experience the 155-foot zenith of the ride, followed by an 80-degree drop, the steepest for Universal Orlando. Additionally, guests will experience 12 seconds of airtime and weightlessness.

In Orlando, park day tickets start at $109 at each of the theme park's three parks. The Velocicoaster is located at Universal's Islands of Adventure. Annual passes for two parks for Florida residents starts at $299.99; a three-park pass starts at $399.99. 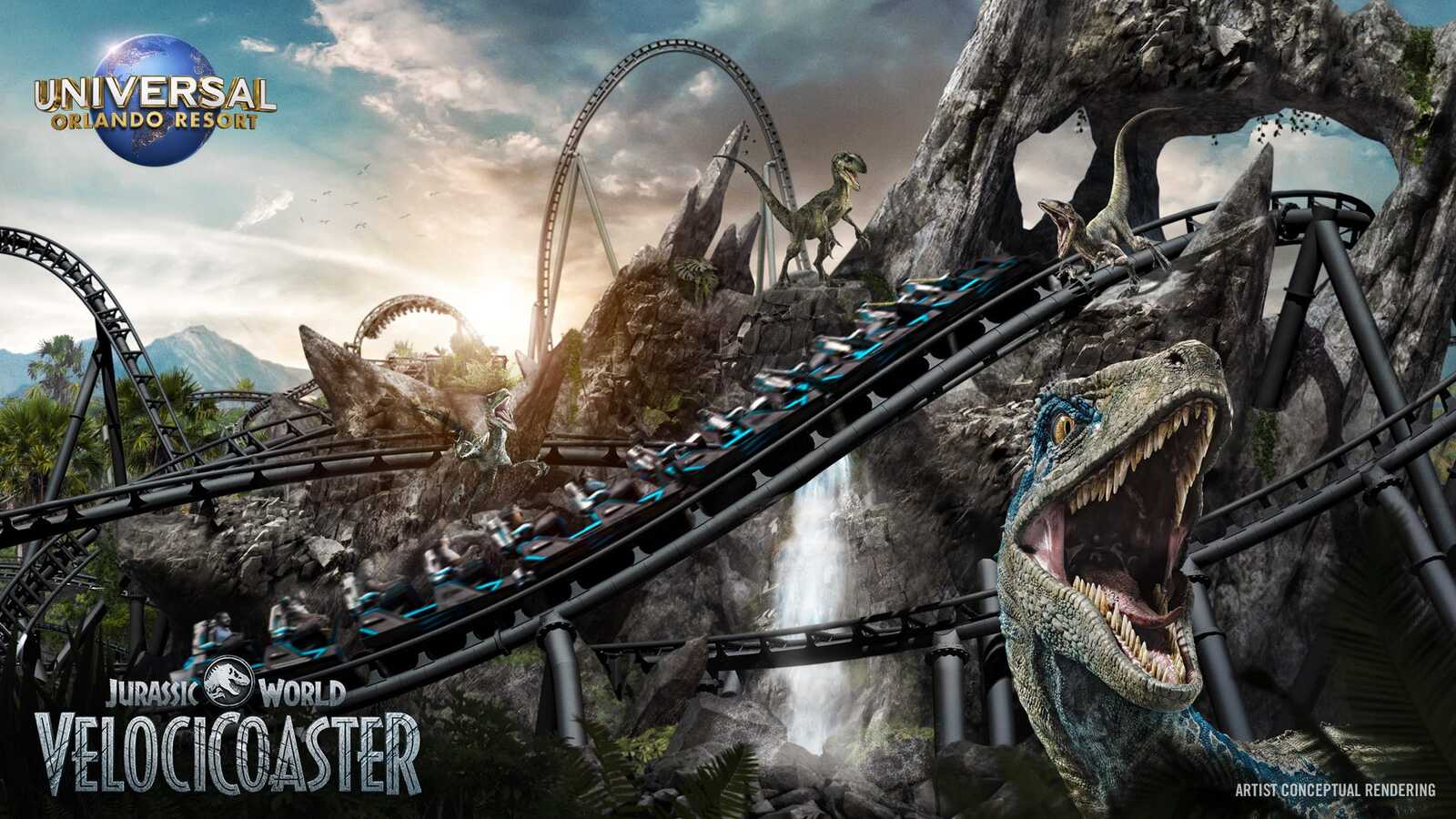 Back in California, Universal Studios Hollywood, which reopened in mid-April, is drawing guests to the new dinosaur at Jurassic World – The Ride, Indominus Rex, a creature 55-feet long from head to tail, capable of fluid, synchronized movement. The mammoth figure can blink, clench its jaw, and flex its arms. Indominus battles the Tryannosaurus Rex in the ride's final moments.

The California location tickets start at $99 for state residents; $109 for those out of state. Season passes start at $189.00. The park states that guests must either be a California resident or an out-of-state visitor who can provide proof of full vaccination for COVID-19. Only those from out-of-state who are over-12 years of age can be admitted to the park, since younger would-be guests cannot yet be vaccinated.