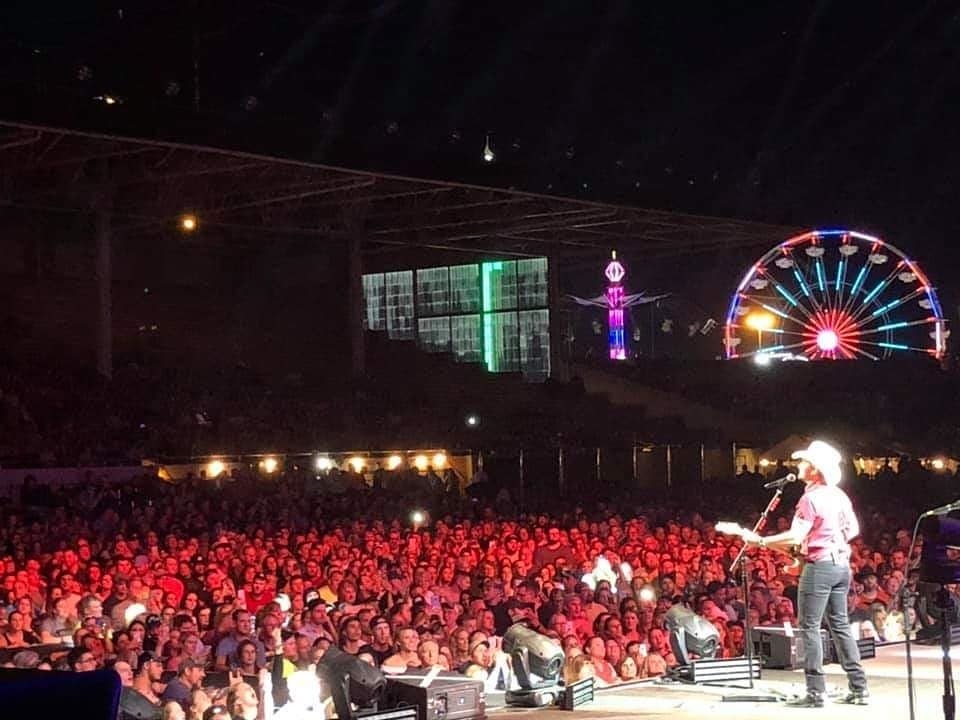 YORK FAIR PACKS THE HOUSE IN 2019
Grandstand performances at the York Fair have been a staple for attracting large crowds, as seen here in 2019. The 2020 York Fair was cancelled due to the Coronavirus pandemic.

The coronavirus pandemic hit all sectors of the fair industry, but the pain felt by fair talent buyers seems especially acute. Even now as partial openings have allowed amusement parks and restaurants to open in many states, the live entertainment industry remains under lockdown.

The vast majority of fairs have been cancelled for 2020, dealing a near lethal blow to talent buyers industry-wide. About a Dozen full fairs have been held in some form or another in 2020, but those with entertainment are implementing government mandated capacity rules, operating grandstands at 50 percent capacity – or less – and with all the social distancing requirements that have become commonplace throughout the U.S.

Other fairs – notably the Delaware State Fair – have cancelled live entertainment and grandstand acts entirely. In Ohio, only Junior Fairs are allowed, no live entertainment (not to mention midway, concessions, grounds acts, etc.) are permitted.

Talent buyers, their fairs and the artists and entertainers they book, are looking to next year, navigating a maze of fear and uncertainty. From publicity to contractual relationships, the COVID-19 pandemic might have the longest lasting impact on talent buying than any other segment of the fair industry.

The majority of fairs—more than 80 percent – according to the Talent Buyers interviewed for this article and other sources – have simply switched their contracts to 2021. In other words, most fairs and artists agreed to simply appear next year. A simple solution, but solving only one factor in the entertainment market equation. Not only are there still open dates and schedules that weren't able to mesh, but the pandemic has caused a host of issues that change the fair entertainment landscape into the 2021 season.

“Most fairs we rolled over into 2021, so it was just a rescheduling thing,” said Todd Boltin, President & CEO, Variety Attractions. “The Nashville community was very good about that, and it's easier all the way around. But we are in unchartered waters. And, each state is different, and what this will look like next year is anybody's guess.”

Variety Attractions, who books everything from grandstand acts to grounds acts as well as spectator sports, both Motor Sports and Rodeos – lost more than 600 fair contracts – but Todd Boltin, President & CEO, is quick to point out that his fair clients have had it much worse.

“The fairgrounds are a year-round business,” said Boltin. “They've lost all their rentals for the entire year, the RV Shows, the Antique Shows, banquets. It's been devastating.”

The negative impact doesn't just stop with the fairgrounds. It ripples throughout the entire community. “The general public is really unaware how important the entertainment impact is to the local towns and communities,” he said. “They stay in hotels, go to restaurants, it's a big overall impact. “

He cited the example of the Bloomsburg Fair in Pennsylvania. The county of Bloomsburg has an 8 percent Amusement Tax on all forms of entertainment, including “fairs and fairgrounds.”

“It's lost revenue for the entire community,” Boltin said. “I don't know how soon they'll bounce back. You see them doing drive in concerts, drive in movies, just searching for some sort of revenue. Most just are toughing it out.”
Everyone is hurting. The live entertainment industry has been decimated by the Global Pandemic, but because of the longevity of fairs and the unique place they hold in the pop culture entertainment landscape, they may actually have gained a competitive edge moving forward.

“Most artists are making more than 80 percent of their revenue on touring, and that revenue is now gone in one year,” said Pam Matthews, Executive Director, International Entertainment Buyers Association (IEBA).

Layoffs and furloughs have swept through the entertainment industry, especially production companies. Talent Agents have likewise been impacted – even kingpins like William Morris have let go 40-50 percent of their agents, said Matthews. “I haven't seen anything like this, not after 9-11 and not for Y2K. We have nothing to compare it to. The impact will be prolonged and protracted and we still don't know when it will end.”

Matthews suspects that larger companies, such as Live Nation and AEG, are in the better positions to survive the pandemic and its economic recession. “Smaller agencies could go bankrupt. We are seeing a contraction.”
Fairs though, are in a stronger position than other venues and festivals according to Matthews. “I don't think we're going to see any fairs go bankrupt,” said Matthews. “It's important to understand that many fairs are some kind of governmental agency, they are associated with the department of agriculture, and are subsidized in some way. They have bigger reserves than other venues.”

Given this fact, fairs may actually be in a better position than in 2019. As Matthews points out, Pollstar and other live entertainment industry observers, declared that we were in a “golden age of touring.” But the same attribute – some form of governmental support and a stronger groundswell of community support than other venues – enhancing the ability to survive the turbulent pandemic booking waters – put them in a weaker competitive position than other venues.

Governmental support may be an essential lifeline, but constrained budgets and legislative belt-tightening often limited the headline entertainment budget for many fairs who were often outbid by festivals, casinos and other venues, making fair talent buying an ever-intensifying seller's market. Many fairs decided the costs had become too high and ceased or greatly reduced headline grandstand entertainment.

“With all the touring, I think artists and production were overstaffed and that drove costs up,” said Matthews. “But those companies have pared down by 85 percent. Everyone is looking to pare down production after losing an entire year's worth of revenue. They may not want to use as many trucks, they will try to cut costs and scale down. Their prices could go down.”

“Fairs have been here for hundreds of years and will continue to be here,” said Sara Novak, Vice President, Triangle Talent. “That's a strong point for the artists. Many festivals don't have that history, and they may be pushed out. We're not as sure that all of them will be able to comeback. Production may be driving the cost of entertainment higher, but prices are also affected by the economy and how high the ticket buyer will be willing to go. Festivals will be more price sensitive than fairs and it will have more of an impact on festivals.”

“The soft ticket shows for agents are easier to sell, the pay one price fair model,” said R.J. Romeo, president, Romeo Entertainment. “With the hard ticket, there are fans coming to see that artist. Those tickets might be subject to more price sensitivity.”

He added, “What we learned from the recession of 08, fairs did very well, during that time. The economic hardship saw people spending close to home. That's the value of entertainment, so the affordability of great music and entertainment is what makes us unique. I think that next year people won't travel as far, that bodes well for regional entertainment.”
What is 2021 looking like in terms of booking? “Right now, we are seeing quotes in line with last year, but I do think artists are more open to looking at other options,” said Novak. And, while many fairs are holding off any finalized booking, “most are moving forward normally. If they don't, we'll be behind and you could be stuck, ” she said.

But the rule seems that most fairs and artists have agreed to just repeat the 2020 agreement for 2021, but there are still gaps and unanticipated scheduling conflicts. “There aren't a ton of openings, because most of the artists are already booked. In a normal year, we would be booking 18 months out, but that didn't happen this year and we are booking about three months into 2021.[Fair] budgets have to be approved, and we're still waiting on those situations longer than usual.”

A fraction of the handful of fairs that did play in 2020 featured entertainment, but with several social distancing restrictions, which limited ticket sales. What aspects of these Pandemic concert conditions will carryover to 2021 are now being determined.

“We've run the entire spectrum from cancellation of the ground stand acts to having a capacity plan,” said Novak. “We've revamped the capacity restrictions, added video screens, spaced out the areas. We had worked out very good plans, working with the county and the fair, and giving our recommendations. But ultimately, it's not up to us but the states. The fairs were very intentional and communicated that everyone was being protected, but they had to jump through a lot of hoops and some eventually cancelled.”

The live events that did get produced, especially the first ones, caused a backlash of negative publicity and new legal concerns.

A turning point in the 2020 live outdoor was a June concert by Chase Rice, one of the first live music events with crowds exceeding 25 people. More than 1,000 went to the show at Historic Brushy Mountain State Penitentiary in Petros, Tenn. The show received widespread media attention – Rice's Instagram post of the show was captioned: “We back.”

Rice drew criticism from fans, the music industry and other country artists. Kelsea Ballerini famously tweeted: Imagine being selfish enough to put thousands of people's health at risk, not to mention the potential ripple effect, and play a NORMAL country concert right now.”

“We were getting calls from artists, who were afraid of the negative publicity,” said R.J. Romeo, president, Romeo Entertainment, citing a festival in Alabama, where Nelly and Clay Walker performed. “They saw what was happening to Chase Rice, there was no social distancing, not a mask in sight. People were asking why does country music not care about their fans? Artists needed guarantees of wearing masks. They were ordering more stringent measures that some states or counties were requiring.”

Most fairs cancelled, rolling over their 2020 entertainment line ups into 2021. But as new contracts get drawn up, new contractual issues have emerged that talent buyers – the nexus point between the fair and the entertainment – are currently sorting out. “Our clients need help navigating the legal waters and force majeure provisions, and ramifications,” said Romeo. “When we rebook or submit offers for 2021, we've been working overtime helping them sort through the new language.”

According to Romeo, the language revolves around the responsibility for cancellations, especially in the case where an act has routed a tour, but then two or three fairs cancel. Not only is there an apprehension about the lingering effects spilling over to next season, but there's clearly a sense that the some contractual relationships have to be forever revised.

“Some of the clauses that are being inserted for 2021 are completely one sided,” said Romeo. “We're amending it so the contracts are more fair and balanced. We're inserting clauses to close loopholes.”

We're seeing new language from a protection standpoint,” said Novak. “How are the fairs protected from the financial impact of a cancellation?  The artists were receiving protection, but the fairs needed the same protections, if the decision to cancel is a sound decision based on Force Majeure, the fairs need that protection.”

Grandstand performances at the York Fair have been a staple for attracting large crowds, as seen here in 2019. The 2020 York Fair was cancelled due to the Coronavirus pandemic.