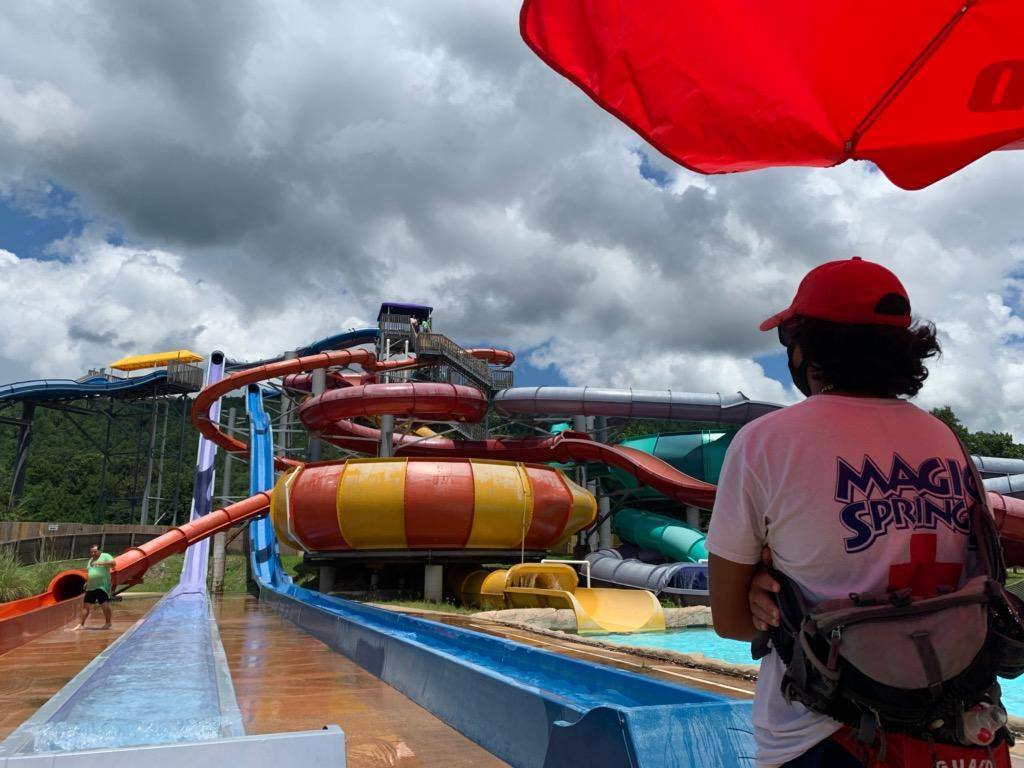 Magic Springs Amusement and Water Park Opened for 2020
The park opened with limited attendance and plenty of safety protocols for its guests.

Pandemic or not, people were ready for wet summer fun at the park. Face masks were required for entrance to the park as well as at indoor restrooms, changing areas, dining areas, and gift shops, as well as on the bumper car ride and on the park's The Hawk, a rotating boom ride from Zamperla.

However, the park is not requiring them on other rides and elsewhere in the park where guests can be outdoors and six feet in social distancing capabilities apply. And they were not required on water rides and attractions, or for kids under 12 years of age at shops and at the park's front entrance, according to the park's general manager, Jack Bateman.

According to Wampler, the park is meeting guidelines for park visitors, and masks are “highly recommended.”

Along with warm waters to lure guests, the park added an appearance by “mermaids” in the wave pool for two hour-long shows on Mondays earlier in the summer. Mermaids were part of the park's summer line-up last year as well. Fancyful Parties in Little Rock, Ark. brings the mermaids, who also offered a meet and greet opportunity with the kids, that is now socially distanced due to the pandemic. This allowed for photo-taking opportunities but no close contact or character hugs. 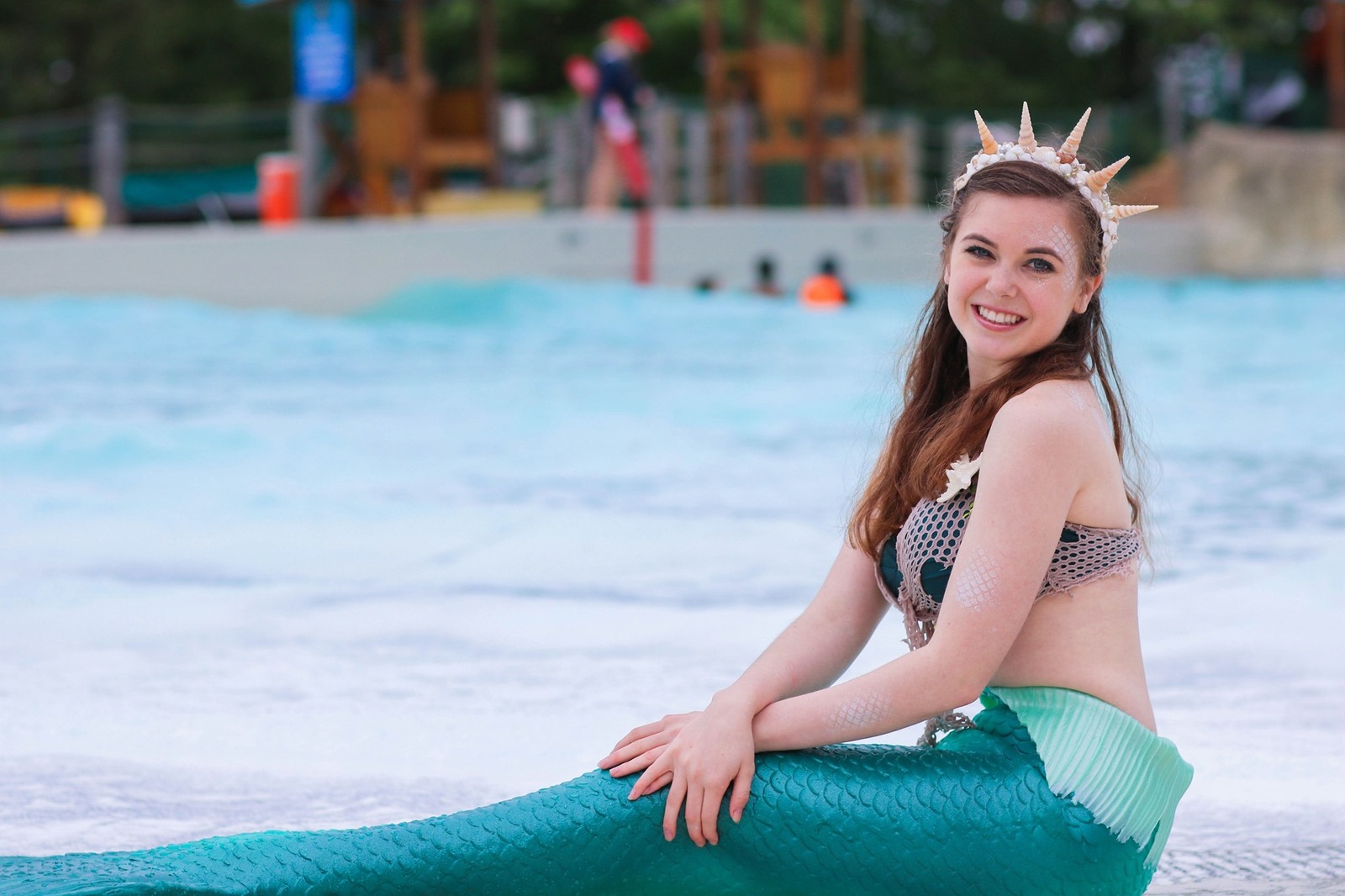 On Sundays, guests were allowed to bring in their own ice chests, an opportunity that lasted through September 6th.

On select evenings, park-goers were also able to watch a family movie screened in the wave pool. The film is screened at approximately 8:40 p.m., when darkness allows for viewing; the park itself closes at 7 p.m.

Coming up October 10 through November 1st, the park is running its annual Magic Screams Halloween event, which will be modified in structure to allow for social distancing due to the pandemic.

Discounted park admission were offered during late summer through September 7th – attendees who donate unopened school supplies receive admission for a rate of $29.99.

And on Sunday, September 6th, the park is offered a live, outdoor music concert in the amphitheater, celebrating Hispanic heritage. The performance by La Fiera de Ojinaga was held with social distancing again in place between groups of attendees. It is not the first concert the park has held successfully this season: Zach Williams, Molly Hatchett and Blackfoot were among the summer performances.

As a further draw, the park offered a “We Care” feature for both its season and Gold Season passes. Added to show appreciation for visitor support at the park, among the additional bonus offerings on Gold Season passes purchased by May 31st, were a $10 per pass food credit, free season tube rental, and a free bonus “bring a friend” ticket, for any day through the season, which ends 11/1. Additionally, there were three bring a friend tickets available for special days including Magic Springs Birthday celebration on July 22nd, Labor Day September 7th, and for the opening day of Magic Screams, October 10th.

These special perks were added to supplement usual park pass bonuses, such as a free meal plan with Gold Season passes.

Some attractions have remained closed this summer, such as game locations, the Old Time Photo shop, and the park's Chiller Pool, Log Flume, SkyShark, and Splash Island. Waves were not operational at the Wave Pool due to social distancing guidelines, and tubes were not allowed in that pool; tubes were required and provided for use in the park's river. Despite these closures and attendance limitations daily, with so many bonus features, the park is proud to have made it's attendance goals, according to Wamper. 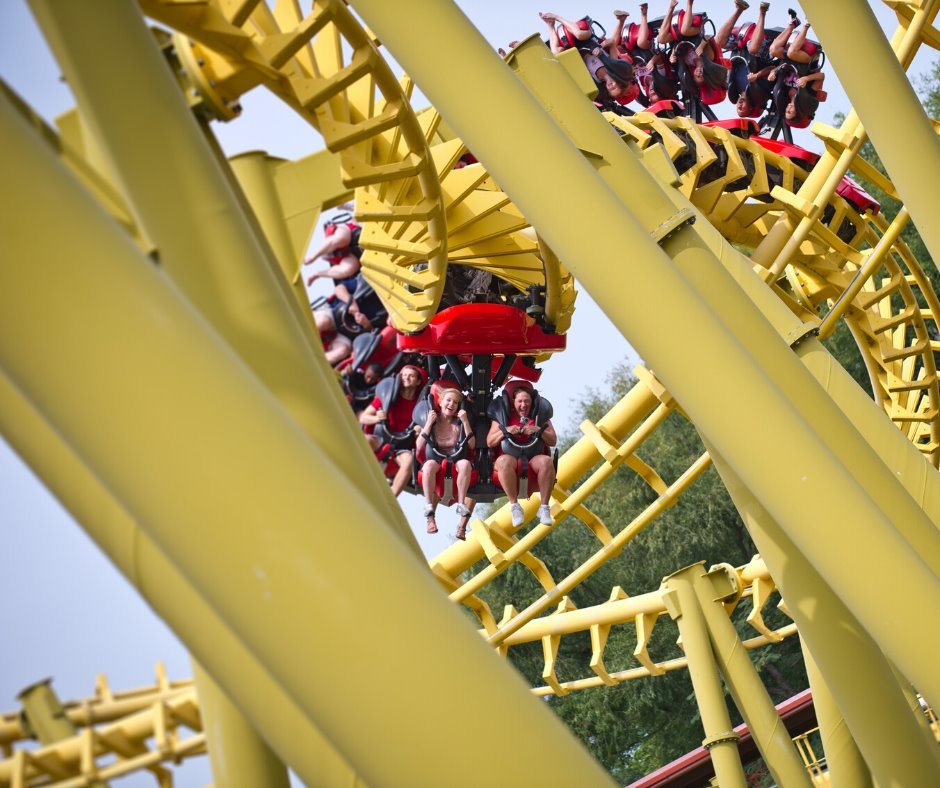 The final day of 2020 operation for the Water Park at Magic Springs was Labor Day, September 7.  The park will be open weekends starting October 10 for the theme park's halloween event.

At Lake of the Ozarks in Missouri, the Big Surf Waterpark was also open this summer; although food services were scaled back to allow for social distancing and park safety, rides such as the Lazy River, wave pool, and the Challenger thrill flume were open.

Nevada's Cowabunga Bay in Henderson, Nev., was in Phase 2 of reopening, allowing the park to operate at 50% capacity. The park offered full food service, including service to cabanas, wine-based alcoholic beverages that include frozen drinks, and freshly made funnel cakes.

The park, which reopened June 1st, doubled its cleaning crew; all staff was clad in masks and gloves; social distancing was enforced. Additionally, according to sales director Sharaf Chenault, it allowed family groups only on slide rafts. If there are only “two people in your group, normally we would add people to the raft so that we can have four people go down on the slide. This year, just to make sure everybody feels safe we're going to keep just your family group together.”

Social distancing markers were also in place as were limits on attraction queues. Masks for guests were required for park entrance, and at food service and retail locations when making a purchase.

The park opened with limited attendance and plenty of safety protocols for its guests.