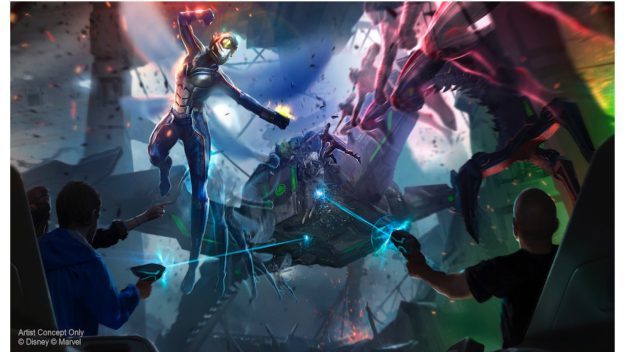 Spider Man, Doctor Strange, all of the Avengers are coming to Disney California Adventure in Anaheim, Calif. in summer 2020. They’ll have a new land all their own, Avengers Campus, and guests can shoot webs with Spidey, and dine in an Ant Man eatery.

Disney’s first-ever Spider Man ride will be one attraction in the new land, allowing guests to board a Web Slinger vehicle and capture “Spider-Bots.” And, it’s teased by Disney as being different than any other Disney ride. It's housed at the Worldwide Engineering Brigade building, also known as WEB. The story is that there’s an open house at WEB, with inventors inviting visitors along for a test drive of a vehicle called the Web Slinger. Riders will be able to toss out webs, receive some virtual superpowers, and help Spider-Man capture Spider-Bots. A gift shop titled WEB suppliers will entice visitors to purchase Spider Man merchandise.

And what would a new ride be without a gift shop/chance for you to fork over your wallet in exchange for an endless supply of branded merchandise? We didn't get many details, but WEB Suppliers appears to be here for your Spidey merch needs.

Also on the campus: an Avengers attraction that places guests on a Quinjet aircraft such as those seen in every Avengers film, to fight villains and save the planet Terra, aka Earth, with a stop in Wakanda, home to Black Panther. The queue entrance will feature a replica of the glass-walled Avengers Headquarters, featured in Avengers Endgame.
The Headquarters is the main nexus of the campus, and it will hold the land's second major ride. Much like with Disneyland's Star Wars: Galaxy's Edge ride, Rise of the Resistance, this ride will not open until the second phase of the land’s construction. Thanos may well be one of the villains ride passengers will meet. The attraction will feature a new ride system that appears to allow guests to use their seat as a battle jet pack/weapons device, making each rider essentially into their own weapon.

The theme park’s new land will also place Doctor Strange in a new residence, titled the California Sanctum – or at least the ruins of that sanctum, which park guests will be able to tour. The character will also be the star of a new live-action performance that will describe “the mysteries of the Multiverse.”

And the good doctor will join other meet and greet characters available for greetings and presumably many Instagram photos touting the new land. Characters will include the full Guardians of the Galaxy crew, Doctor Strange, Ant Man, the Wasp, other superheroes from both Wakanda and Thor's Asgard, and both Iron Man and Black Widow. The Avengers crew themselves will also appear in person along the rooftops of their headquarters building.

Dining will also be available with a Marvel-ous twist. The main restaurant will be called Pym Test Kitchen, for the uninitiated, Pym is the technology behind the creation of Ant Man. At the restaurant, the tech will be used to “grow and shrink food.” The restaurant is projected to include oversized juice boxes and human-sized pretzels as décor; dining choices will likely also be expansive in style and selection – thought undoubtedly not human-sized.

Another interesting first is the fact that Disney’s global theme parks are being linked with this new land. A storyline will connect the California Avengers Campus with one to be opened at Disneyland Paris, and that line will continue at other locations of Disney parks. In spring of 2019, the Ant-Man and The Wasp: Nano Battle! Attraction opened at Hong Kong Disneyland -  the resort’s second Marvel-themed attraction. It was also a first due its starring role for a female super hero playing lead. The Iron Man Experience is also in place and doing strong business at Disneyland in Hong Kong.

According to Disney creative exec Scot Drake, “In some ways, these new campuses are like the Avengers themselves: a group of diverse individuals who have teamed up for the same purpose…brought together to champion the next generation of heroes.”

The entire new land will be located in what was formerly the Bug’s Land area which was themed around the film A Bug’s Life. That attraction has already been demolished and curtained off from park-goers behind a wall labeled Stark Industries.

Despite this tribute to Ironman Stark, and the title of the new land as Avengers Campus, the name of Marvel itself will not be in the park, as Disney is restricted from using the word in any theme park land due to licensing rights. The rights are a complicated affair due in part to the use of Marvel characters at a rival theme park: Universal Studios.
Universal's Islands of Adventure in Florida already includes multiple Marvel-themed rides based on Spider-Man, the Hulk, Doctor Doom, and Storm of the X-Men. But that does not mean that Disney is being left out in any way. Other Marvel rides are planned for Hong Kong Disneyland in 2023, Walt Disney Studios Park in Paris in 2020, and there will also be a Guardians of the Galaxy ride opening at Epcot Center in Florida in 2021.