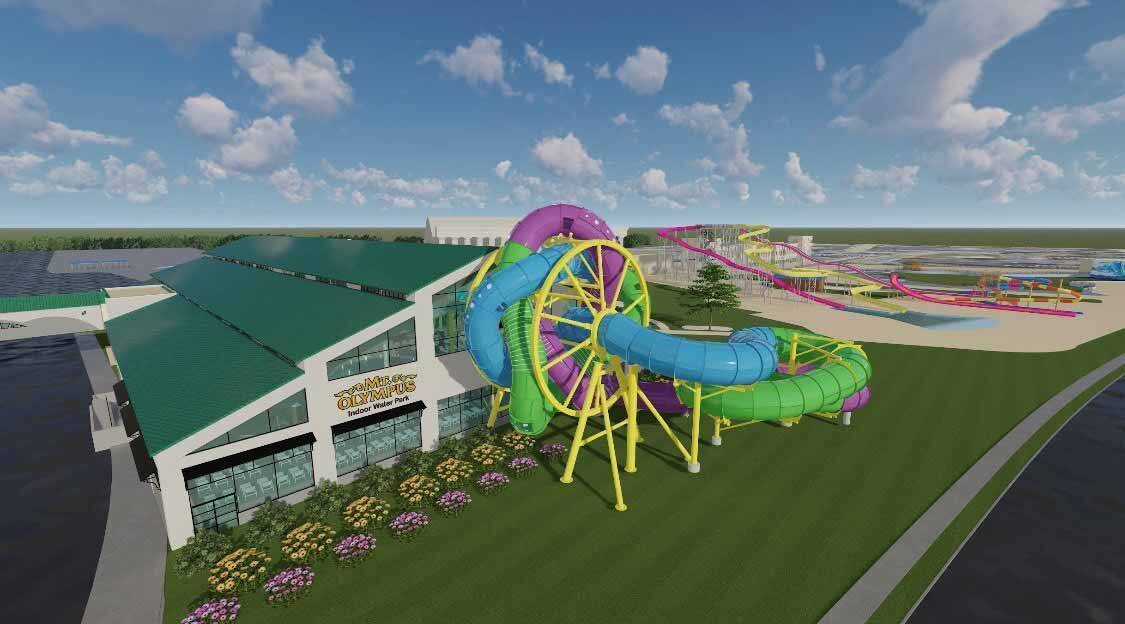 Making a splash in 2022, Mt. Olympus Water and Theme Park in the Wisconsin Dells is under construction for the first rotating waterslide in the USA As part of a $23 million dollar expansion, the indoor water park is building Medusa's Slidewheel, a raft ride that can accommodate four riders per raft in a rotating waterslide that combines elements of Ferris wheel rotation with the propulsive energy of a waterslide.

Architecture and engineering firm Ramaker and Associates is behind the project, which is unique in this country. China and Poland have rotating waterslides in their amusement park quiver.

The ride's construction, which began last July, is planned for completion by Memorial Day of 2022.

The Slidewheel excitement is not the only new element of the park's expansion: a large swimming pool area will be added as well a major remodel of the waterpark itself to align with the new elements of the park.

According to Nick Laskaris, Mt. Olympus CEO and owner, the new features will have a “tremendous impact in a positive way. It's more square footage so people can spread out more. And there will just be a lot more area for people to enjoy.” 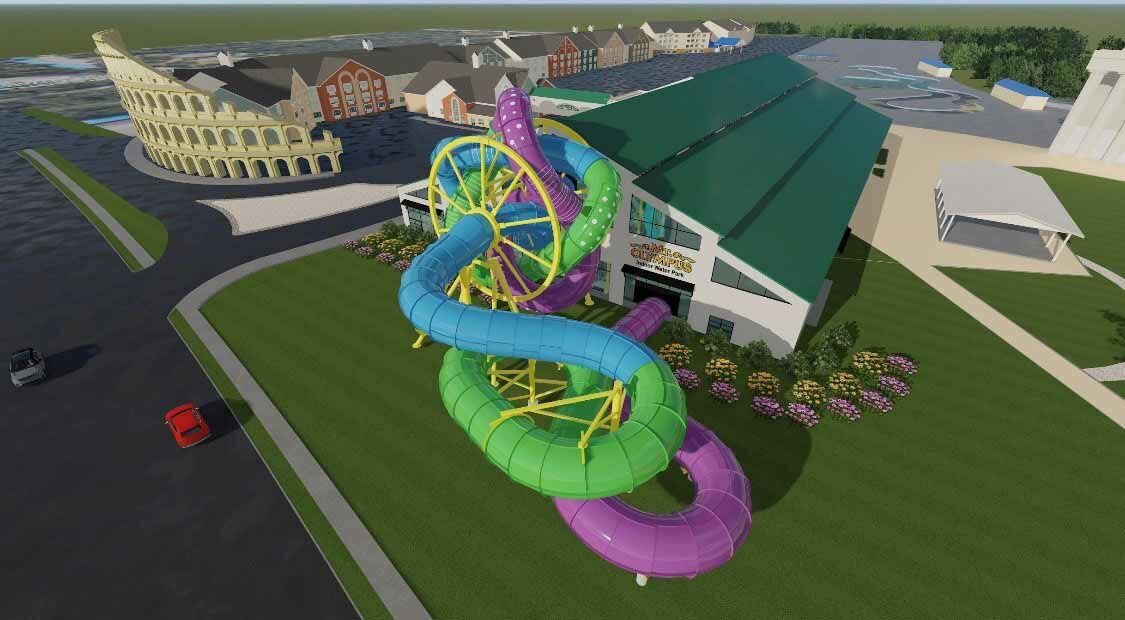 Laskaris purchased the park in 2007. Previously known as Treasure Island, Mt. Olympus has a theme based on Greek mythology; the new ride and swimming area will be further devoted to that theme. To accommodate the added space and ride, the children's play area, Huck's Landing, was taken down and repurposed.
The expansion includes an additional 22,500-square-foot building attached to the waterpark. What is now known as the Bay of Dreams is being transformed to Medusa's Indoor Waterpark. Slides are repainted in the existing waterpark area while the additional indoor space will expand the park's footprint and offer room for more attractions.

The new water wheel is in a whole new class of ride, different from anything the park has done previously, according to Laskaris. The refurbishment, additional space, and wheel itself make up the largest investment Mt. Olympus has made in its 50-year history.

Ramaker and Associates has been involved with all major attractions at the park since 1998. The company's expansive portfolio in aquatic engineering and design has made it a ready partner to waterparks throughout the country. Recent work has included the world's tallest spin coaster, the Tsunami Surge at Six Flags Hurricane Harbor, Chicago, and Tidal Wave at Six Flags Hurricane Harbor Rockford. The latter is the Midwest area's first tailspin waterslide.

While the SlideWheel is garnering a great deal of enthusiasm as anticipation for the attraction builds, Ramaker is also offering architectural design and aquatic, geotechnical, civil, and MPES engineering to Mt. Olympus for its overall renovation and expansion. The expansion will increase the size of Mt. Olympus by 50% with its vast indoor addition. The swimming area will include both a wading pool and activity pool as well as the SlideWheel.

Located in Sauk City, the firm is excited to bring the first water wheel of its kind to the states. “Nobody else has built it here in the United States,” Laskaris says. “What got me was just the rotation of it.” 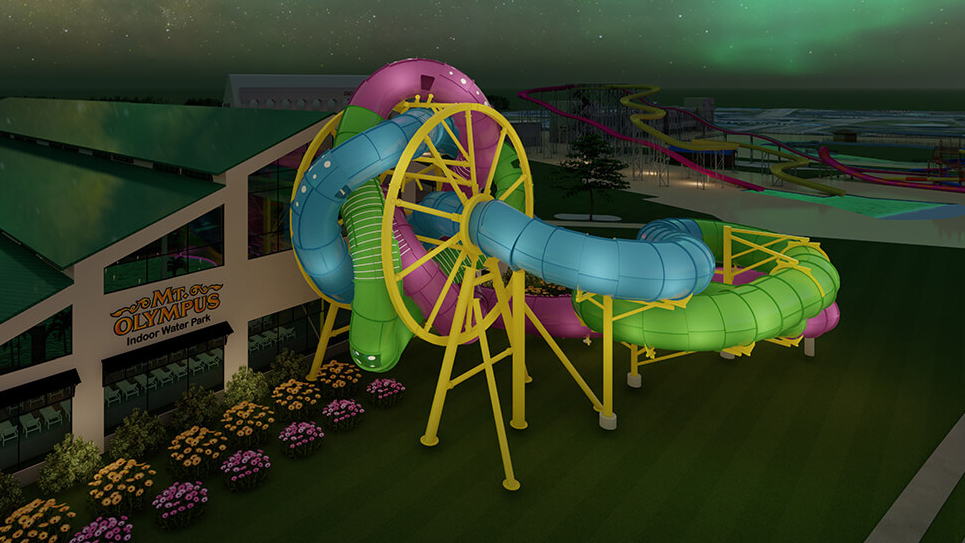 Laskaris relates that the guests riding on the water wheel will enter the slide through the middle of the attraction and “right away the whole slide is rotating.” The ride will go both backwards and forward for riders on the four-person rafts. It will feature a series of tubes on a horizontal axis, allowing the ride to rotate in full while guests sail through the tangled tubes. Speed, g-force, and air time –all of the traditional waterslide excitement – will be greatly enhanced by the rotation and pendulum motion of the ride, making the experience entirely different from anything riders will have experienced before.

Laskaris was inspired to add the slide to Mt. Olympus after attending a variety of waterpark trade shows where he viewed it. He enthuses that “It's going to be the most unique slide this town has ever seen.”

Those who have experienced the design love the ride. “It's incredible just from the sheer fact of the drops and being able to go forwards and backwards through one attraction is pretty cool,” Laskaris asserts.

Along with the slide itself, the expansion was important for the resort, Laskaris says. With some 1,600 hotel rooms available for visitors, more capacity was needed for the waterpark, which usually sees an average of one million visitors per year. Needing both enhanced capacity and a “cool” attraction, Laskaris eagerly embraced the waterwheel concept along with his plans for an enlarged space.

Regular admission to the park is $20.