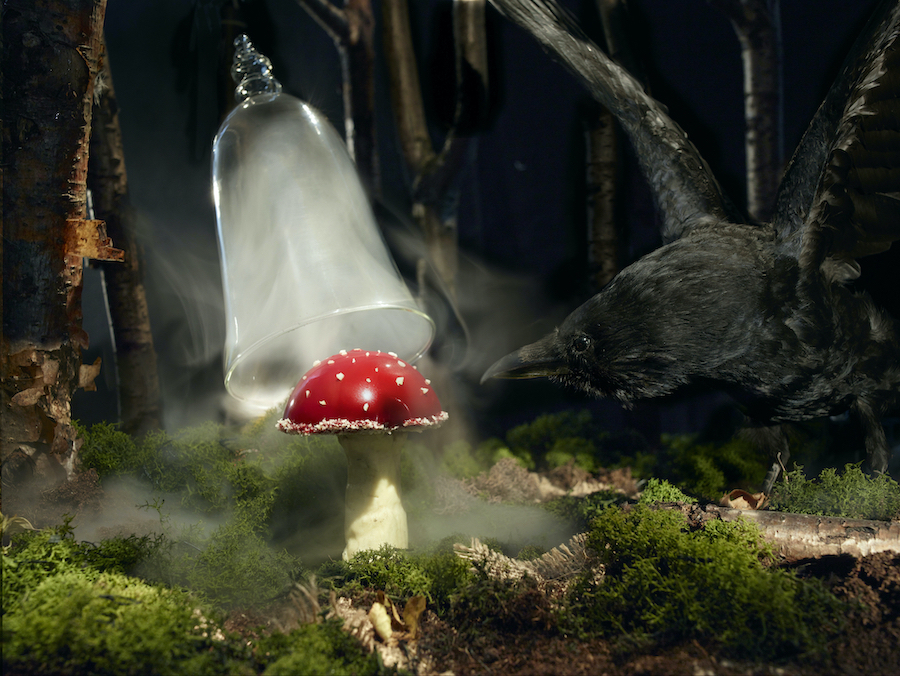 Located in London's theater district, the first immersive DC Comics universe focused on fine dining opened in August. It's a concept that will woo foodies as well as superhero fans. Park Row features five top restaurants and bars and serves up a combination of high-quality food and cocktails within the immersive universe of Gotham City. Just follow the bat signal.

Visitors who enter Park Row move from Soho to Gotham through a secret door in a mahogany bookcase in “Wayne Manor.” From there, they enter the bat cave to an entire “world” or rather, the DC Universe. The mammoth space is about 18,000-square-feet and contains five different areas. Along with Batman's home turf, other main experiential spaces include Pennyworth's, the Rogue's Gallery, Iceberg Lounge, and Old Gotham City. Then there's The Monarch Theater, which features floor to ceiling projection mapping and an elaborate tasting menu. 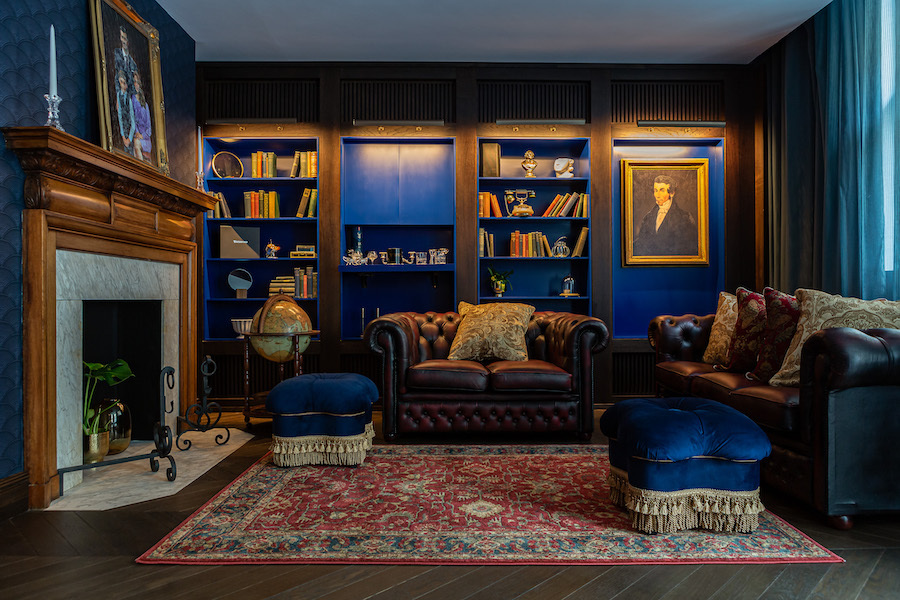 The gastronomic experience is unique, but hardly a surprise – thematic, immersive dining experiences are a burgeoning area of theme park entertainment. Disney's Oga's Cantina is an immersive cocktail lounge and dining experience found at the center of the Black Spire Outpost village on the “Star Wars” planet of Batuu within the Florida and California theme parks.

At the Monarch, the most elaborate and elegant space, just 20 diners experience an eleven-course tasting menu. The menu itself is a tribute to the DC world, with the project screens and food designed together to provide an intense emotional experience.  Among the courses are a parfait “poisonous mushroom;” scallops, oysters, caviar, and white chocolate topped with gold leaf; a Black Angus tenderloin and truffle; and even edible jewelry. The story behind the dining experience is that the theatre was once the “heart of entertainment” in Gotham. Its doors were shuttered after the deaths of Bruce Wayne's parents, Dr. Thomas and Martha Wayne.

A 360-degree projected environment appears around diners via 6 x Epson EB-L1075U laser projectors, each featuring an ELPLX01 ultra-short-throw ‘periscope' lens. Diners are seated in a simple, grey walled box of a room, with a table in the center and ten seats positioned on either side of it. The table has its own special effects: smoke releases from it, the table heats, levitates, and has sound and magnets built in.

With impeccable service and art deco design as well as a starring food and beverage platform, the theatrical dining experience is focused on design right down to the multi-course meals. The “toxic” red and white mushroom is one such dish. At the Monarch, where the dish is presented, dining proceeds in a 2-and-a-half-hour experience filled with what Wonderland terms emotionally driven courses. As an example, the “toxic” mushroom is accompanied by the sounds of animal noises, smoke releases, and the room darkens before the faux mushroom is presented to diners. 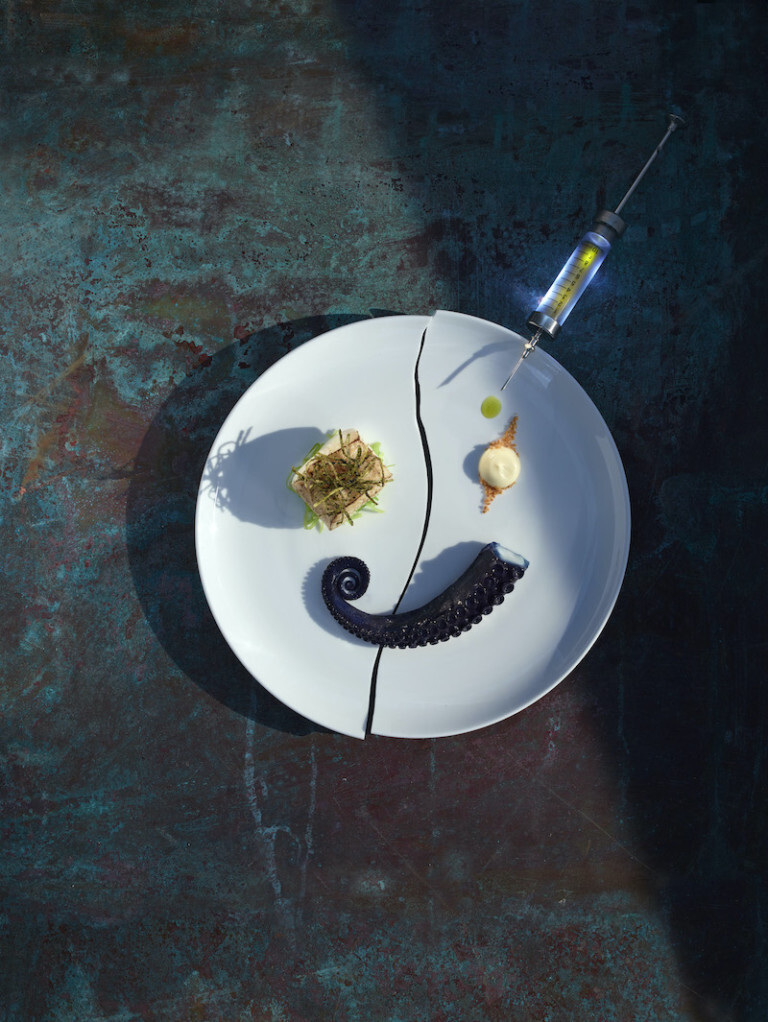 Additional dining rooms are inspired by characters such as The Penguin with his Iceberg Lounge restaurant and bar – replete with live entertainment and a large statue of the Penguin himself; Catwoman's Rogue's Gallery, which features reproductions of famous artworks supposedly stolen by her; Old Gotham City, a speakeasy cocktail bar; and the classic Pennyworth's named for Alfred, Batman's erstwhile butler.

Along with eating a high-end meal, Batman fans can search out “easter eggs,” such as the paintings on display at Catwoman's gallery, or a bust of the Joker as portrayed by Jack Nicholson in Old Gotham City's bar among others.

Park Row's executive chef, Kim Woodward, previously helmed the kitchen at London's 100 Wardour and Savoy Grill; Karl O'Dell of the Michelin-starred Texture, also in London, heads the gourmet dining experience at The Monarch Theatre. The five dining and drinking experiences are helmed by different teams. The Iceberg Lounge, Rogues Gallery, and Pennyworth are handled by one, while a separate team operates the Monarch.

Guests are encouraged to dine in elegant attire, but no costumes are allowed to maintain the guests' willing suspension of disbelief.

And there's plenty to make them willing. At Pennyworth's there's even a whiskey named for the ancestral home of Bruce Wayne in in Scotland. Among the multi-courses at The Monarch is a Joker-inspired octopus and black cod dish that simulates the Joker's smile. And experiential cocktails at Catwoman's Rogue's Gallery involve the forged paintings hanging on the wall. When a Blue Boy cocktail is ordered, Bulmer says, “the waiter goes over to it, lifts the picture frame off the wall, takes it over to your table, and pours your Blue Boy cocktail. A blue liquid, the cocktail, comes out – and the blue drains from the Blue Boy's outfit.”

The witty sleight of hand and illusions of Park Row's Gotham City concept is just the beginning for Wonderland, Bulmer asserts. “We have the whole DC world. Warner Brothers has a catalogue of further incredible brands and IP that, as storytellers, we would love to explore. We are at the beginning of our journey.”

Already, there is Wonderland at Home, specialty boxed foods thematically rendered. The first box is devoted to Zack Snyder's Justice League film characters and stories, so that purchasers can dine on treats such as the Big Belly Burger, Jitters Coffee, Koul Beer, and a Smallville dessert.

In short, London's Park Row and the world of Gotham City is the first immersive dining experience themed as entertainment, but unlikely to be the last.

The Monarch Theatre: Cod and Octopus