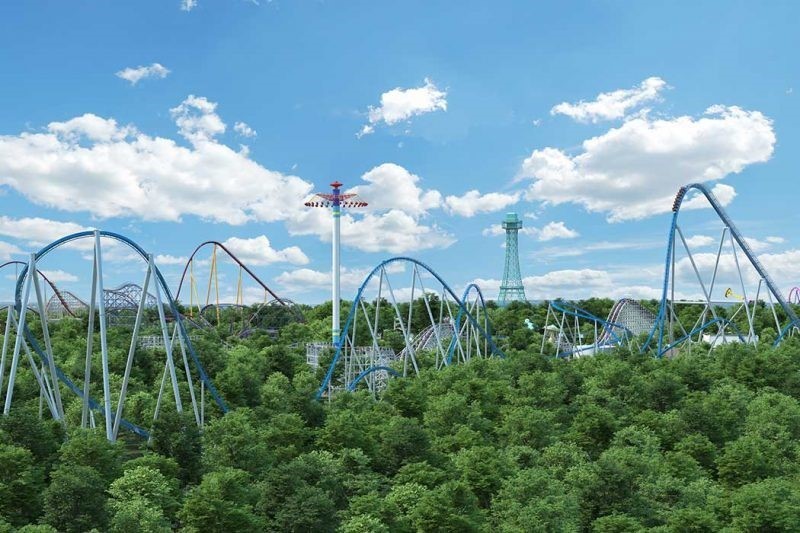 The long anticipated, much promoted new attraction at Cedar Fair's Cincinnati-area King's Island was announced in mid-August: Orion, themed to match the park area in which it is being built, Area 72.

Billed as just one of seven giga coasters in the world, the ride will feature a

What are the other giga coasters out there? Also in the Cedar Fair family, Cedar Point, located in northeast Ohio, was the first theme park to feature a 300-foot roller coaster when it opened Millennium Force in August 2000. Intimidator 305 reigns at Virginia's Kings Dominion, Fury 235 at Carowinds in North Carolina, and at Canada's Wonderland, the giga coaster is Leviathan.

Rounding out giga coasters are Red Force in Spain's Ferrari Land, which stands as the world's tallest at 367 feet; and Japan's Steel Dragon 2000.

When complete, the new Orion will be Kings Island's tallest and longest, as well as its fastest steel roller coaster. The minimum height to ride will be 54 inches.

Building the coaster will cost approximately the amount it took to build the entire theme park back in 1972: a budget of $30 million.

According to King's Island GM Mike Koontz, “I expect to see a lot of people coming from all over the world to ride.”

The coaster will traverse over seven airtime hills and at a 91 mile per hour speed, it will be the 7th-fastest roller coaster in North America.

Before the August 15th announcement, there was much speculation over just what the new attraction would be, with the park “leaking” promotional clues to local media.

Koontz related that Kings Island was waiting for the right moment to introduce the project.

Kings Island whet fan and media appetites and set its PR wheels in motion earlier this year with clues set to Cincinnati television. Clues were presented in a partially shredded binder marked “Evidence.”

Along with serving as a stellar ride tease, they built a backstory for the ride as X-Base, with the evidence coming in the form of a New Hire Manual for Project X, an organization somewhat reminiscent of Men in Black as a secret government alien investigation unit.

The clues detailed a Project X history with five sets of coordinates cited worldwide, including four with tie-ins to craters: Verdefrt Dome in South Africa, Lake Wanapitei in Sudbury, Ontario, Canada, ManicouganCrater, and The Lac Wiyâshâkimî / Clearwater Lakes. Also mentioned was Chicxulub, a reference to the Chicxulub Crater, a meteor crater that is also tied into the Cretaceous–Paleogene extinction event, including dinosaurs. This was noteable in that Kings Island's Dinosaurs Alive closed in 2017.

If all these mysterious clues weren't enough, a Spotify playlist issued by the park added more fan fodder with songs ranging from R.E.M.'s “It's the End of the World as We Know It;” The Doors' “The End,” and “Because The End Is Really The Beginning” by The Comet Is Coming. It was an 11 song play list, and got fans talking.

Now that the secret is out and the clever marketing clues have stopped coming, the facts of Orion remain. It's a steel coaster, has a chain lift hill launch system, and a ride-time of 3 minutes in length. Riders will be seated four-across in a single row; there will be three trains with eight cars, for a total of 32 riders at a time per train. The per-hour capacity will be 1650 thrill-seeking passengers. The height of its first drop is 300 feet, the length is 447 feet; there will be 8 hills total in all. The hills will vary in height: 287 feet, 174 feet, 202 feet, 56 feet, 147 feet, 125 feet, 90 feet, and 83 feet.

Future riders now know that Orion will be themed to the park's Area 72, as the latest prototype vehicle developed by the Project X initiative. The story theme is that scientists are racing against time to develop technology capable of weaving transport vehicles through a coming meteor storm, and traveling to a new planet within the Orion constellation. For the program to be successful, it needs volunteers to help with testing. And that's where the riders come in.

Roller coaster fans will be readied to “volunteer” on this fast moving behemoth of a coaster sometime in Spring of 2020.