New Rides Ahead at Universal Orlando: The Secret VelociCoaster and Nintendo World

The Jurassic Park Coaster should be ready to give a dinosaur roar when the multi-launch ride with a raptor theme is complete in 2021. After a long wait, Universal Orlando Resort has finally officially announced the secretive construction on the Jurassic World VelociCoaster, scheduled to debut at Islands of Adventure.

The new coaster is described bringing its riders into the air at 70 miles-per-hour. It's the first coaster based on the Jurassic Park and Jurassic World films, and will be story based, featuring its own unique original story and utilizing the original film cast. This means that Chris Pratt as Owen Grady, Bryce Dallas Howard as Claire Dearing and BD Wong as Dr Henry Wu will be making their appearances. With over 4,700 feet of track, the coaster will take riders on a high-intensity, high-speed chase, and position them racing next to a pack of Velociraptors.

Guests should expect an experience that accelerates quickly through two launches, with the fastest of the two reaching a maximum of 70 mph in 2.4 seconds. They'll also experience a barrel roll of 360-degrees; and the thrill of a zero-gravity inverted stall. That stall will take riders upside down and across 100 feet of track. But, that's not all – they'll also go air-born for 12 seconds, and during the “Top Hat” feature of the ride, shooting up 155 feet into the air and down into a steep drop.

The giant raptors that are a part of the ride are life-size – they were being installed in September, before the official ride announcement was made. Very similar to Hagrid's Magical Creatures Motorcycle Adventure, the recent addition to the Orlando theme-park in Harry Potter World, a thrilling story will be very much front and center on the VelociCoaster. It should serve well as a companion thrill to Jurassic World – The Ride, which opened last year.

Before the COVID-19 pandemic, VelociCoaster was scheduled to open in early 2021, and many theme park pundits were speculating that the ride would be pushed to 2022. But instead, 2021 it is – but when during the year the ride will produce “raptor rapture” for guests is the only question. Since late August, construction has proceeded steadily, with track being installed and the giant raptors shown off to theme-park attendees. Greenery and rock work has been added as well. Whether guests will be masking-up to make the ride is open to speculation, as the pandemic has not abated in the U.S. at this point in time.

Masked or not, in California, where theme parks are still trying to get state approval for reopening, guests at Universal Studios Hollywood will also soon be enjoying a new attraction: Super Nintendo World. Construction has begun with a variety of  façade set pieces, from what appears to be Yoshi's shop to a mountain, and Nintendo's iconic Bower's Castle all seen by eager theme park fans arriving looking for evidence of the build. The sets appear to be duplicates of those at Super Nintendo World located in Universal Studios Japan. There will certainly be a Yoshi's Adventure attractions, Mario Kart ride, both Bowser's and Peach's Castles, shops and dining experiences. 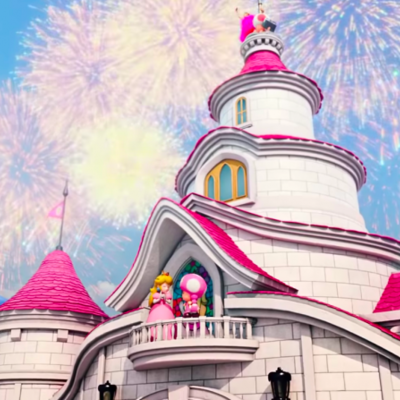 The new attraction area will feature all of Nintendo's most popular characters and games in what Universal Parks & Resorts CEO Tom Williams describes as a “whole new separate area” of the theme park. The first phase will feature two rides, the Super Mario Kart and Yoshi's Adventures. The park will utilize a partnership with Nintendo similar to that of its agreement with Warner Brothers for the use of Harry Potter, and will work closely with Nintendo. According to Comcast executives, the new area has the potential to be the largest attendance driver the park has had, comparing its success potential to Harry Potter, which is said to “drive incremental attendance of two million people.”

The World will also be interactive, featuring technology that will combine real world experiences and video games. Park guests will enjoy interactive experiences by using Power Up Bands, which are wearable wristbands that can be linked to smartphones using the studio's own app. They will be available for purchase at Super Nintendo World, and themed to different characters the guests can choose. The bands will also let visitors collect digital coins and compete in games with other guests.

To win them, visitors can physically visit the land's Question Blocks to collect coins, enjoying an experience similar to competing for a high video game score. Digitally, they can connect keys, unlocking play opportunities through Key Challenges that include a variety of battles. The idea is that guests can keep score and play a variety of games, and keep score if they wish within rides.

Universal Creative senior VP and CCO Thierry Coup says park-goers should consider Super Nintendo World as if it were a “life-size, living video game where you become one of the characters. You're not just playing the game; you're living the game, you're living the adventure.” The high tech experience is singularly designed to fuse real life with video gaming, he adds.


Hollywood's Japanese counterpart will be the first to open with these exciting, state of the art features, and was in fact originally slated for a grand opening during the 2020 Tokyo Olympics, which did not of course take place. Its launch was described as being delayed for a few months due to the pandemic, but just how long the delay will now last is not known at press time. The delay may possibly last until 2021. The expansion of this major attraction area will be followed by Hollywood and Singapore locations.

As to when Super Nintendo World will open as part of Universal Hollywood's Epic Universe, that is also uncertain. It was scheduled to open in 2023, but the pandemic has caused a likely delay there as well. Universal owner Comcast has confirmed as much.