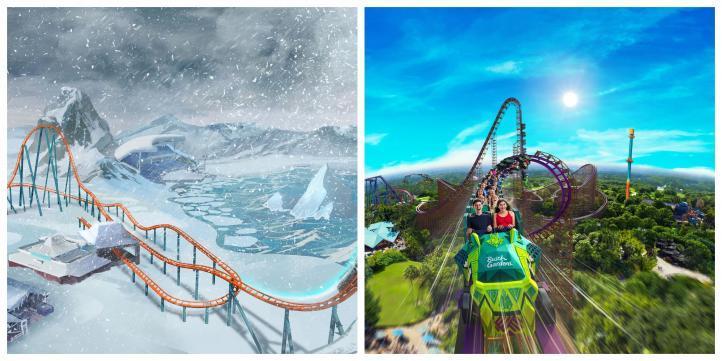 Continuing the trend of moving away from controversial animal acts, the company is focused not only on the thrills but on a larger purpose when building coasters. According to the director of rides and engineering for SeaWorld Parks, Jonathan Smith, “We try to integrate them with the causes that we care about, such as animal care, conservation and education.”

SeaWorld Orlando's Ice Breaker will be located near the park's Wild Arctic exhibit. Thematically, the focus is on promoting conservation issues about the Arctic and the ocean. At Busch Gardens, the towering Iron Gwazi is inspired by the crocodile, a fitting Floridian theme. The behemethon coaster is described by Smith as being “what could be one of the best coasters in the entire world.”

Iron Gwazi at Busch Gardens Tampa is poised to be the tallest and fastest roller coaster in Florida. It will stand at 206 feet, and reach speeds of 76 miles per hour. The height pushes it above Cedar Point's 205-foot coaster Steel Vengeance, positioning itself as the tallest hyperhybrid wood-steel coaster in North America.

Iron Gwazi is being converted by Rocky Mountain Construction from an old twin track design to a new single track design. Rocky Mountain, located in Idaho, has a strong reputation for rebuilding aging wooden coasters and trading the old wooden tracks for smoother, tougher steel track, and has rebuilt over 12 of them.

Among its successes: Steel Vengeance itself, which was converted at Cedar Point from the aging Mean Streak coaster. All its conversions have become enormously popular, making it highly likely that Iron Gwazi will be as thrilling a design as it sounds. The structural engineer on the project is Alan Schilke. Along with Rocky Mountain's Fred Grubb, Schilke created their all-steel IBox track and wheel system, which allows theme parks the ability to take existing wooden coasters and remake the tracks rather than rebuilding from the ground up. The company is planning to retain approximately 40% of the original wooden structure used for the new Iron Gwazi. The old ride closed in 2015 after a run of 16 years.

The designers were able to include a 4,075-foot-long, 110-second course that includes overbanked twists, 12 seconds of airtime, and multiple turns. Inversions are included as well a zero-G roll and a 180-degree stall will keep riders upside down for a few seconds even as they are racing forward.

Despite the thrills, the ride height requirement will be 48 inches or 4 feet, making it available for coaster fans of a younger age. The Cedar Point coaster has a height limit of 52”.

The 48" height limit means that Busch Gardens considers the ride a family thrill ride, rather than for adults and teens only.

Also categorized as a family thrill ride, with the same height limit, is the new Ice Breaker at SeaWorld Orlando. This ride will be a little less intense than the new Iron Gwazi.

Ice Breaker will utilize linear synchronous motors, and feature a quadruple launch. Trains will enter a track switch after leaving the station that moves them magnetically backward, forward, backward, and backward again before taking a lunge forward to reach the ride's top 52 mile per hour speed and soar out of the launch area. Smith describes the “cool” element of this beginning as “camelbacks -- airtime-generating hump-shaped hills integrated into the track.” He terms backwards airtime such as this “unique.”

Ice Breaker will also take riders on a 93-foot spike at 100 degrees, or 10 degrees beyond vertical. An 80-foot top hat-shaped element will also bring mega airtime to passengers.

SeaWorld has a few more ride changes afoot as well. Along with Iron Gwazi and Ice Breaker, Tampa's Adventure Island will debut the new Solar Vortex. Solar Vortex will be the first dual-tailspin waterslide in the U.S., offering high-banking rotations, rapid descents, and two open tailspin features. The ride comes from Whitewater, and also features three AquaLucent elements that make good use of Florida sunshine. Colorful patterns will shine through the slide throughout the ride, which should reach max speed of 20 miles per hour. It will open at the Busch Gardens-adjacent Adventure Island in time for the park's 2020 season.

And at SeaWorld San Diego in California, the new dueling coaster Tidal Twister has opened with the theme of demonstrating the “power of the ocean.” The ride accelerates up to 30 m.p.h., along a figure-8 track that also includes a Zero-G roll in the center. It too has a 48” height requirement.

SeaWorld Orlando plugged the new Ice Breaker with a 20-second teaser that shows riders diving and turning through a snowy mountain landscape. It's been almost three years since SeaWorld Orlando opened Mako, the steel coaster that travels up to 73 m.p.h.

SeaWorld has previously stated their intent to add a new ride or experience at each of their 12 parks across the U.S. annually. The goal is to increase attendance and the company's strong rebound over the last several years. SeaWorld Orlando opened the family raft and thrill ride Infinity Falls late this year; in March, the family-friendly Sesame Street Land opened with a decided family focus.