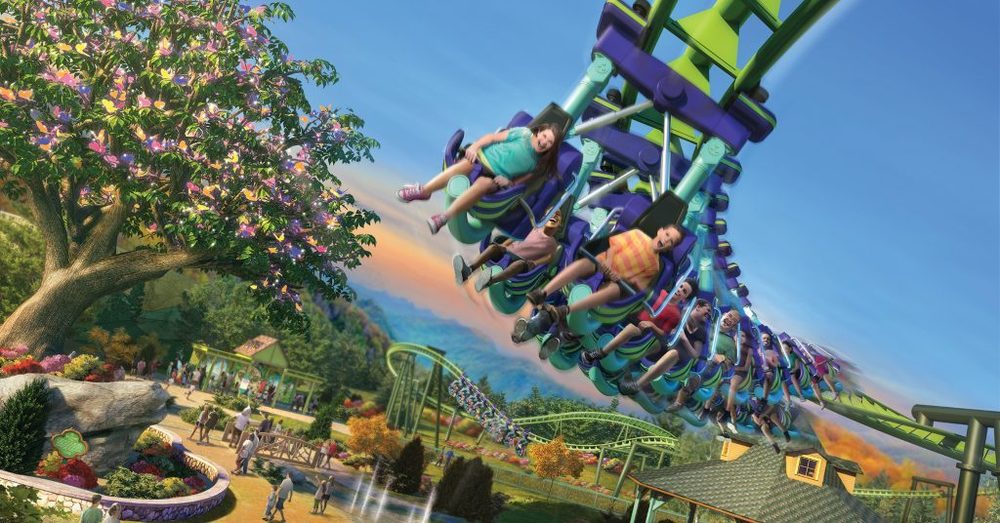 Vekoma’s new coaster is just one of the attractions in the newly opened Wildwood Grove area at Dollywood. The $37 million expansion  is the largest expansion in Dollywood’s history. It features 11 new experiences for visitors to enjoy. The DragonFlier is one of its star attractions, as it allows riders to soar like a dragonfly as it dips and darts by the landscape of the nature-themed Wildwood Grove area.

The bright-green Vekoma “453m” model is one of only eight such coasters worldwide. The 60-plus foot coaster reaches a top speed of 46 mph along 1,486 feet of track. Riders plunge underground into a trough at the bottom of the first drop, emerging again over a small pond, to create the illusion that the Dragonflier is skimming the water. As the Dragonflier train exits the tunnel, geyser-like water jets blast water into the air. Riders don’t get soaked but the geyser spray adds another element of thrill to the immersive ride. Through much of it, the coaster will hew closely to the ground as it mimics the flight of a Smoky Mountain dragonfly speeding unpredictably through the landscape. The suspended aspect of the coaster is particularly thrilling, as it allows guests’ legs to dangle below them.

The ride features Vekoma hallmarks such as comfortable lap bars that provide maximum safety and unobstructed views; a drive tire lift hill instead of a traditional chain lift means its six-story lift hill will be quietly ridden to its peak.
The attention to safety, detail, and precision is not a surprise from Vekoma, one of the largest roller coaster manufacturers in the world. Last November, the company appointed a new CEO, Har Kupers, who joined the manufacturer nearly three decades ago as an engineer in roller coaster structure designs. Most recently chief operating officer for the company, Kupers won the AIMS International Safety Award in 2017. He assumed his new role as CEO in January.

Located in the town of Vlodrop, The Netherlands, Vekoma is proud of their cutting-edge technology and full-service capabilities including creative design, using both commercially available and Vekoma-owned and developed software programs; high-precision engineering, with more than 125 engineers working in areas such as vehicle engineering, track engineering, systems engineering, R&D and engineering support. The company also offers in-house manufacturing and servicing.

The company utilizes production facilities for trains in the Netherlands, and in Eastern Europe and China for track production, allowing for production at locations that best fit clients’ end destination. Vekoma uses cutting-edge equipment, and concentrates its train production and assembly in the Netherlands, which is home to the company’s specialized engineers. Vekoma Rides has also implemented a new track manufacturing process based on accurately setting and placing ties with jigs which are measured and adjusted through 3D laser measuring instruments. Used for all types of tracks, this improved process includes specialized attention for the 3D line of running rails by adjusting both jig and the continuous 3D rolling process for rail pipes.

The company philosophy is to be committed to “the pure joy of the ride” while also meeting an end result that achieves creative requirements along with meeting  budget, safety, and comfort requirements.

Among the attractions and rides that Vekoma has created besides suspended coasters, are attractions such as Sky Shuttle that provides a vast aerial view over a park by lifting rides into the air to a height of 50 meters. It utilizes a suspended sturdy arm which can rotate, spinning riders for a sensation of hovering.

The company’s Madhouse attraction is an optical illusion experience, one that creates the sense of both weightlessness and being spun upside down, as if gravity was broken. A 4-D theater attraction that can be customized for any entertainment need is another of Vekoma’s signature attractions.

Suspended Family Coasters such as the Dragonflier are available in two configurations; and Vekoma also offers Mine Train Coasters, Motorbike Coasters, Sitdown Thrill Coasters, such as the Space Warp Launch Coaster, a compact coaster; and the Bermuda Blitz. The company is also announcing the development and manufacture of its new Flying Coasters, described as coasters in which riders are comfortably and safely harnessed in a prone position, then transported sideways during a dark ride section. The immersive ride offers a world-saving scenario based on using the riders’ own flying super powers. Passengers are prepared for launching as track and seats turn 90-degrees, smoothly transforming from dark ride to flying coaster. At that point in the ride, riders will experience inversions, air-time moments, and near-miss moments, all with their arms stretched out, positioned face-down and parallel to the track. Vekoma says the experience is as close as possible to flying “just like Superman,” and will be a one-of-a-kind experience.

The company’s custom-designed coasters have included the Tron Light Cycle Power Run created with Disney imagineers to simulate the feeling of riding a motorbike. It surrounds riders with music, lights and 3-D graphics as they race and dive through digitized darkness on one of the fastest indoor roller coasters in Disney history. A different experience provided by Vekoma for Disney, the Seven Dwarfs Mine Train, located in the center of Fantasyland, was also a collaboration with Disney Imagineering. The family-friendly coaster is billed as being exciting yet gentle enough for kids.
On the daring side of the custom coaster spectrum, Disney’s Expedition Everest in Orlando includes beautifully authentic landscapes, a themed station, and the simulated adventure of climbing to Mount Everest.

The ever-innovative, Vekoma was acquired by Sansei Technologies (Sansei), a Japanese company listed on Tokyo Stock Exchange in 2018. 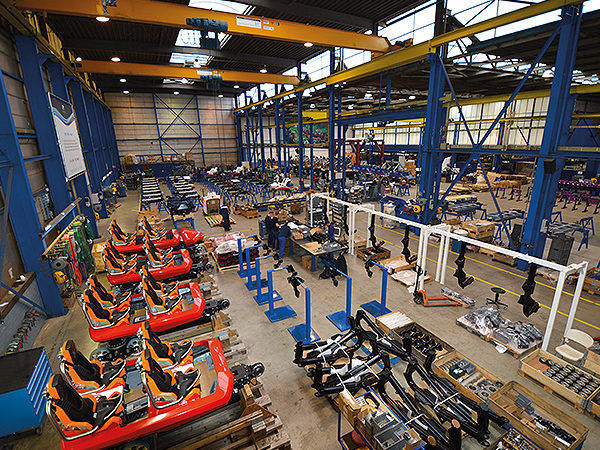 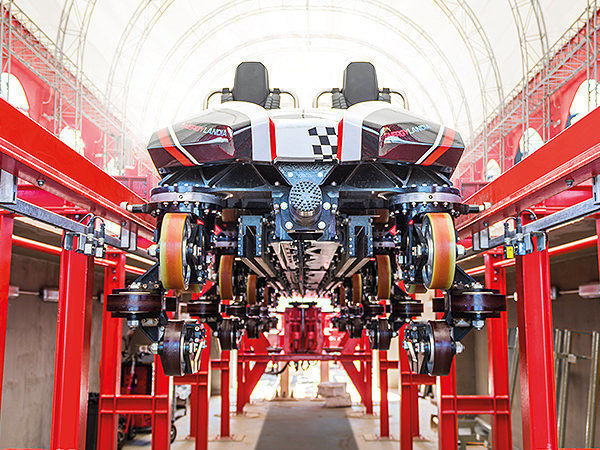