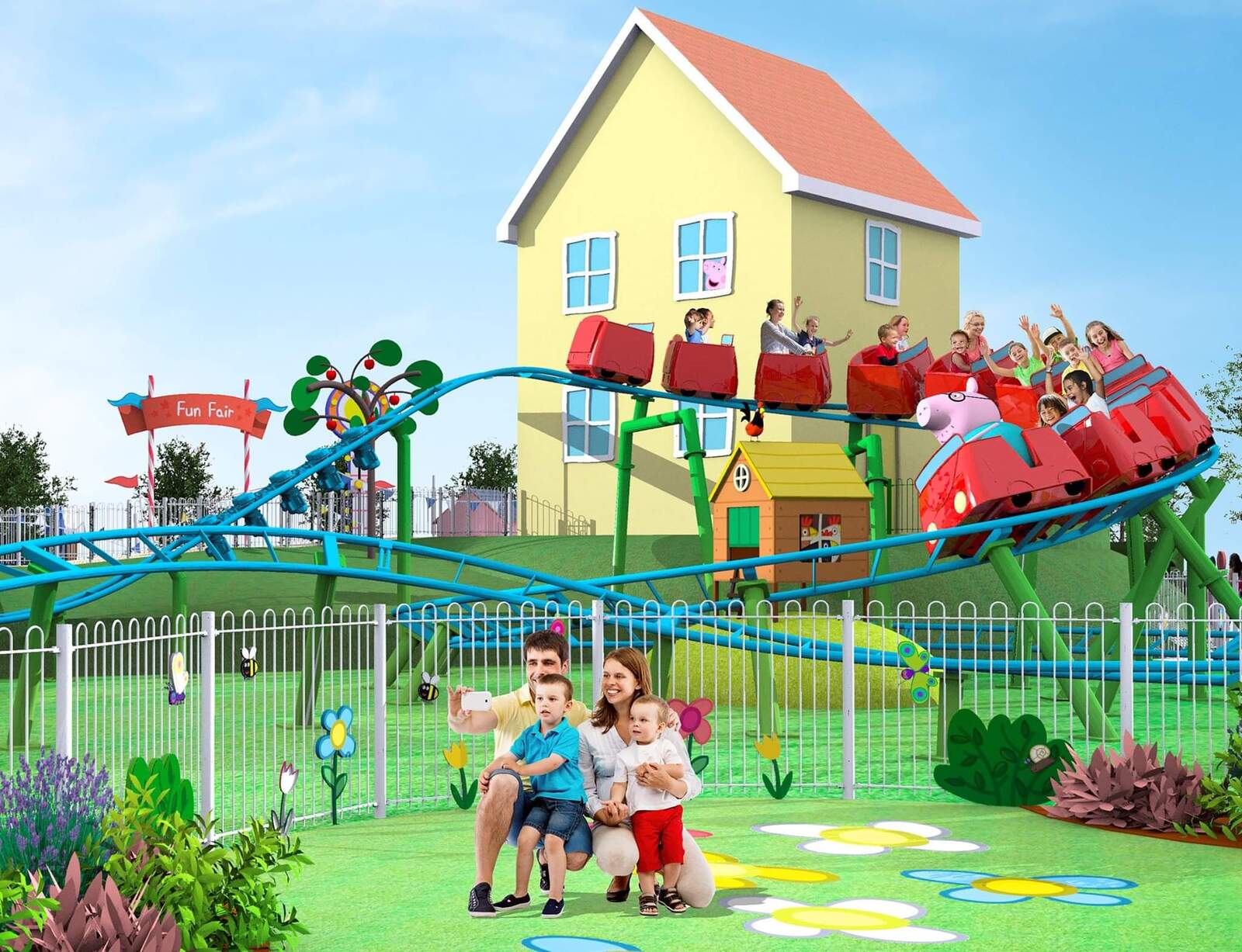 With an adorable oink-oink here and an oink-oink there, the Peppa Pig Theme Park is under construction in Winter Haven, Fla.
Rides are designed for small kids, including a tot-appropriate roller coaster among other family-friendly rides and attractions such as a water-play portion of the park. It will be located adjacent to, but have separate ticketed admission from, Legoland, Florida, and is scheduled to open in 2022. However, annual passes and multi-park passes that include Legoland will be available in coming months.
Along with live events and the splash area, the park will feature a variety of Peppa-themed rides such as Daddy Pig’s Roller Coaster, Grampy Rabbit’s Dinosaur Adventure, Peppa Pig’s Balloon Ride, and Grandad Dog’s Pirate Boat Ride. Other attractions will range from Peppa Pig’s Treehouse to Madame Gazelle’s Nature Trail.
Daddy Pig’s Roller Coaster puts attendees in the eponymous pig’s red car, and on a curvy, but family-friendly, exploration of a new short-cut. Peppa Pig’s Balloon Ride is another gentle attraction, billed as a hot air balloon ride “prize” won by Peppa at the Fun Fair raffle, in which attendees can hop in and join her. Grampy Rabbit’s Dinosaur Adventure offers a ride on a friendly dinosaur, one where parents can join. Another family attraction is Grandad Dog’s Pirate Boat Ride, a sailing adventure to find a hidden treasure.
Other rides include Mr. Bull’s High Striker for a bouncy ride into the sky, Peppa’s Pedal Bike Tour and George’s Tricycle Trail that allow tots to pedal on their own through a “camping adventure” past woods, mountains, and the sights and smells of nature. Kids can choose bike or trike by age and ability.
Along with the rides, the park will also include play spaces such as the Muddy Puddles Splash Pad, with fountains, slides, and other splashes; a Fun Fair fairground with free games; George’s Fort maze; and Grandpa Pig’s Greenhouse, with mysterious growing things to be uncovered.
Peppa Pig’s Treehouse will be a short-distance slide, while Rebecca Rabbit’s Playground is planned as an interactive experience of rabbit burrows for kids to crawl and hop through and explore anyway that they wish.
And as for Madame Gazelle’s Nature Trail, the path will lead families to mystery footprints to explore; there will also be a performance space for live shows called Mr. Potato’s Showtime Arena; and a theater at which to watch Peppa Pig episodes indoors.
For the uninitiated, the theme park is based on a popular British animated TV series for pre-school kids that’s seen globally. It’s broadcast in 180 territories in 40 languages; the U.S. is an important market for the brand. For those unfamiliar with the program, the character of Peppa is 4 years old, likes jumping in puddles and wears a red dress. A statue of Peppa will be featured at the park’s entrance, and attendees will also be able to meet a live version of Peppa herself.
The park is being designed and built by Merlin Entertainments which also owns Legoland. It will be operated through a licensing agreement with Hasbro, which owns the rights to the character.
According to Mark Fisher, chief development officer at Merlin Group, “As one of the world leaders in location-based entertainment, we are delighted to be creating this first-ever theme park dedicated to the wonderful world of Peppa Pig.” He notes that the company has already seen success with Peppa Pig projects elsewhere around the world.
Matt Proulx, Vice President of Location Based Entertainment, Hasbro, joins in saying “With a keen understanding of the Peppa Pig brand, we’re excited to see how Merlin brings the snorts and muddy puddles to life for our youngest fans.”
Central Florida was chosen due to its proximity to hotels and Legoland itself. “…we’ve been serving guests from all over, so this naturally made sense as the right place to roll out our first Peppa Pig Theme Park,” Keith Carr, project director of Peppa Pig Theme Park explains.
It also makes a natural pairing with Legoland, providing many features and rides for smaller siblings as well as parents.
“We’re steps away from the Lego Hotel. It’s nice to be able to book the vacation, come see the theme park. We know that there’s mixed ages within families that can also then carry on [beyond Peppa Pig] over in Legoland Florida,” Carr asserts.
And Winter Haven may not be the park’s only U.S. location. The brand holds plenty of promise for more, planners state.
Located on a five-acre site, the park will have plenty of shade for guests, both landscaped, natural growth and canopies; and all rides have been configured so that both parents and kids can experience them together, with the exception of Peppa’s Pedal Bike Tour and George’s Tricycle Trail which are geared for small kids only.
The park will also be bright and cheerful with plenty of blues and yellows, according to Carr, who notes that the color palettes used were carefully considered. “Everything is very, very specific to the brand,” Carr stresses.
While an annual pass and ticketing options to both Legoland Florida and Peppa Pig Theme Park will be offered in the future, currently annual passes for Peppa Pig Theme Park are available at $74.99. The location is scheduled to open around April 1st of next year. 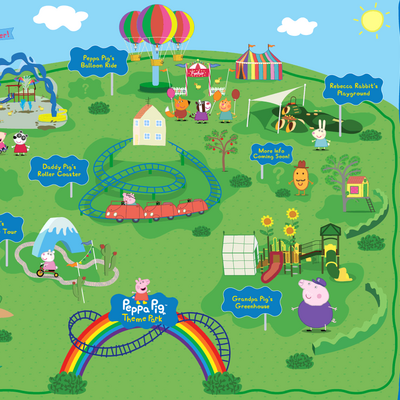 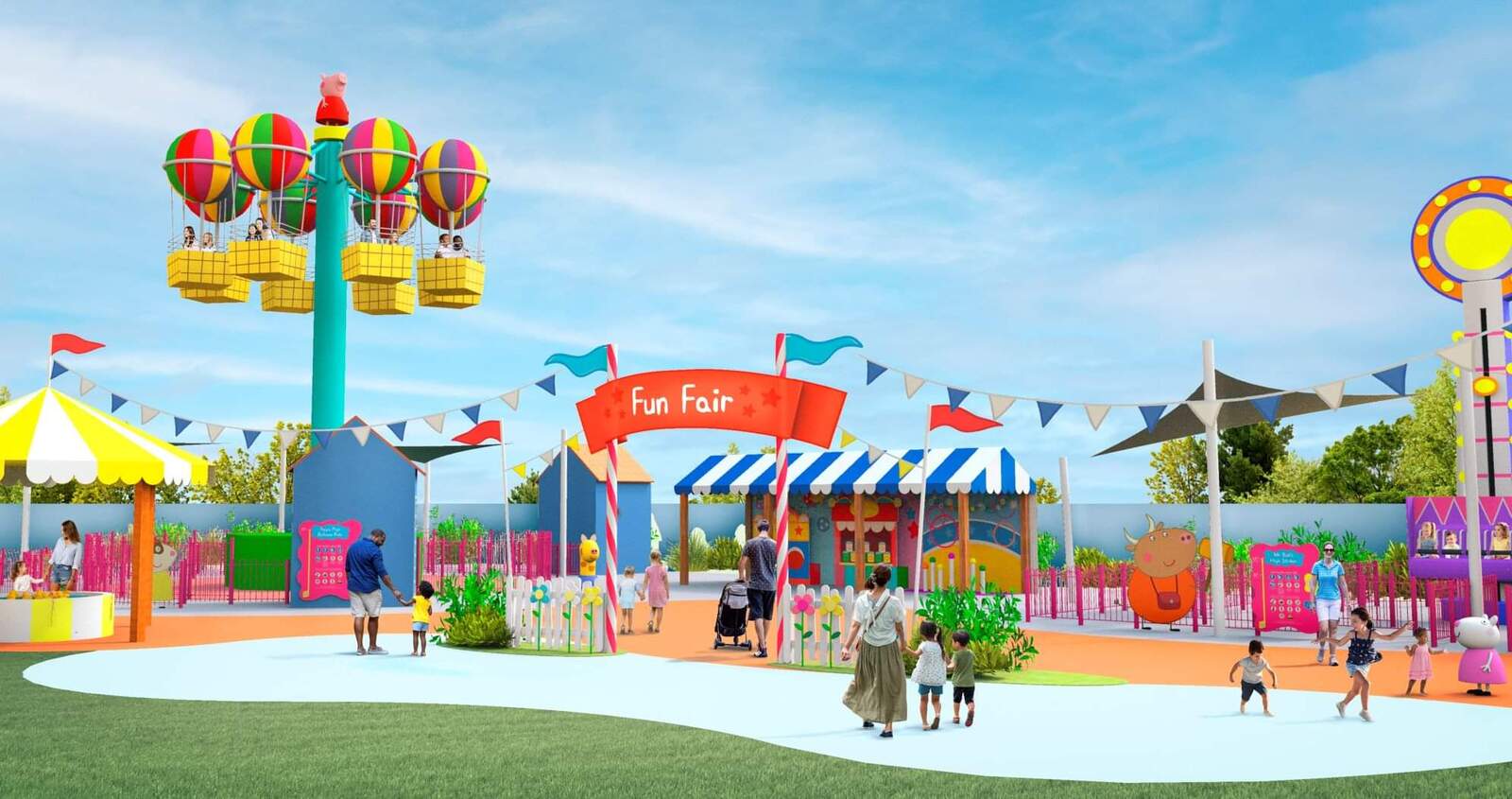