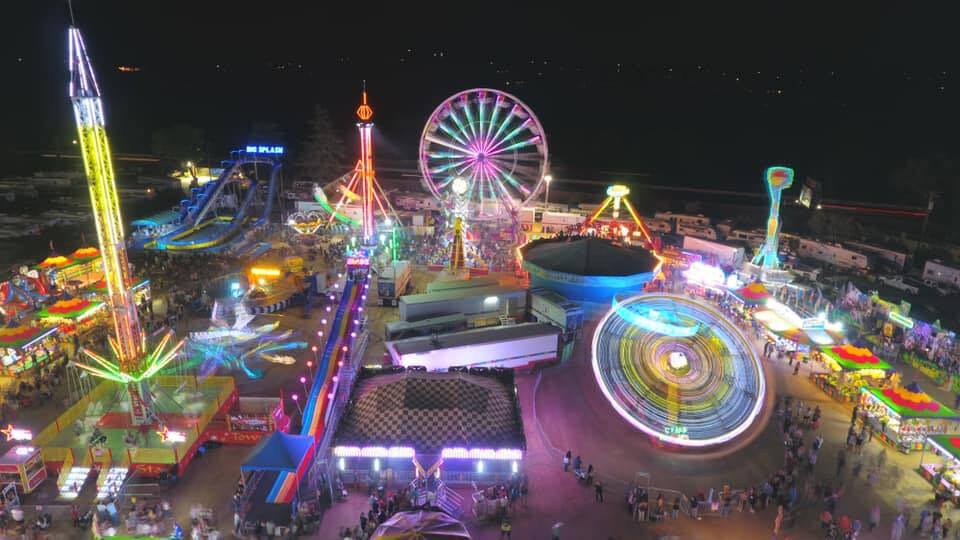 California remains one of the most restrictive states regarding live events and many of the Golden State's spring fairs have had to cancel two years in a row.  After June 15 – the date Governor Gavin announced when California will fully open its economy – if the majority of the population 16 years and older are vaccinated and hospitalization rates are low and stable --  the expectation is that most fairs in the second half of 2021 will take place.

But for the first half of 2021, while amusement parks are allowed to open, midways remained shuttered. Helm & Sons Amusements found a unique way to circumvent these restrictions with an innovative reimagining of the still date. “I'm the first carnival company to get something open in California,” said Davey Helm. “I made what is a portable theme park. I knew we had to get creative to get something going.”

He added, “We wanted to emulate the professionalism of a theme or amusement park, which we do in terms of professionalism, cleanliness and the quality of rides.”

Usually in April Helm plays the Ontario County Fair, which for the second year in a row has been cancelled. Instead, he partnered with an outdoor event space in Ontario, as well as a food vendor and entertainment and opened on Easter Weekend.

“The event was very well received by the community and the host venue liked what they saw,” he said. “It was a self-promoted event. Our partner is a large food concessionaire, and we're looking at the numbers now and we are in talks about extending the stay. The host is thinking of letting us stay here through June, but that might overlap with other dates. For me, it felt really good to be able to listen to the sounds of the midway and to see all the employees who have worked so hard to finally open, and to see all the families come out and enjoy.”

He added, “Everybody's been cooped for a year and a half. We've worked on all the equipment, so we have brand new looking rides, games and food stands. All the extra work has paid off. I think about all those young families who are finally able to take their kids on their first Ferris Wheel ride.”

The portable theme park idea – Helm also calls it a hybrid event, because it has components of a theme park as well as a fairway. The events also feature entertainment on a portable stage, and a circus. After Ontario, Helm & Sons plan to set similar “hybrids” in Victorville and Santa Marie, California Counties whose fairs – mainstays of the pre-pandemic Helms & Sons route – were cancelled both last year and this year.

Each event followed CDC-guidelines, including masking, social distancing, sanitizing stations, and sanitizing crews cleaning throughout the day. The midway layout included fencing for queue line management. Helm & Sons has created a plan that was submitted to, and approved by, local health departments.

“We've embraced the challenge, we've had nearly 14 months of preparation on how to be creative and follow a different business model,” he said. “We had a lot of hours to work on a plan for our company and with our partners.”

Like most any still date, the carnival company  takes on more responsibility, including scheduling hours of operation. But this turned out to benefit the bottom line. “For me, it is more profitable to get to control the hours that the midway is open, so we don't have be open just because the fair is open. I shortened up the hours to give my team more downtime, and get the customers a real feeling of the midway. It's more of a condensed midway business model.”

Helm explained that this new streamlined schedule has proven more profitable. “Instead of being open 100 hours, we're open 25 hours, and that's enough. That makes every hour you're open a full capacity hour. We've also don't open on Mondays and Tuesdays, which are dead days.”

Last year, the company introduced its Magic Money cashless system, but the pandemic lockdown made for a much abbreviated debut. In addition to being cashless, upgrades to the system have made Magic Money transactions completely touchless, making it very conducive to the pandemic-era, especially as live events cautiously reopen, with lower capacity and other restrictions in place.

After June when the state of California hopefully reopens its economy,  it's expected that social distancing and other measures will still be in place. In anticipation of the reopening, Helm and his wife visited every non-cancelled event to meet with fair boards, fair managers, fair organizers and other stakeholders.

“We went over the plan with each of our clients,” he said. “When the fairs come back, they'll be modified fairs, with less capacity and other restrictions. We all want to be ready and on the same page.”

For fairs that have already cancelled – as well for other open dates – Helm is pitching the hybrid model of a portable theme park – which seems to be well received as the communities pour out to support some facsimile of fair normalcy after a year of lockdown and a sluggish reopening.
“We're ready, if you have a good product, we belief in the business model and that it will work. We want to be in front of the next wave and be ready for potential changes. We visited with our clients because we just want to get our route back, but most fairs are planning to have capacity at least half.”

Helm plans on about seven hybrid events based on the portable theme park model, mostly in communities where the annual county fair has been cancelled. “Our only focus is to try to preserve some sense of community in these counties. Without two years of income, these organizations are struggling to stay afloat. Some fairs are just doing some agriculture programming or a drive-thru event. But if we can bring in a safe midway, that keeps the fair more relevant to the community.”

The hope of course is that the ides of June reopening goes smoothly and the fairs and other events on the 2021 Helm & Sons Amusement route are more reflective of 2019 than 2020.  But Helm also feels that elements of the hybrid model will remain. “In some ways, this pandemic has been a blessing in disguise because it has given us and everyone in the industry an opportunity to retool our businesses, and look at it from a different perspective. We've had to find new ways to bring the event to the community. We're going to be dealing with these changes for a long time. Post COVID, you will have to take a new look at every aspect of your business.”