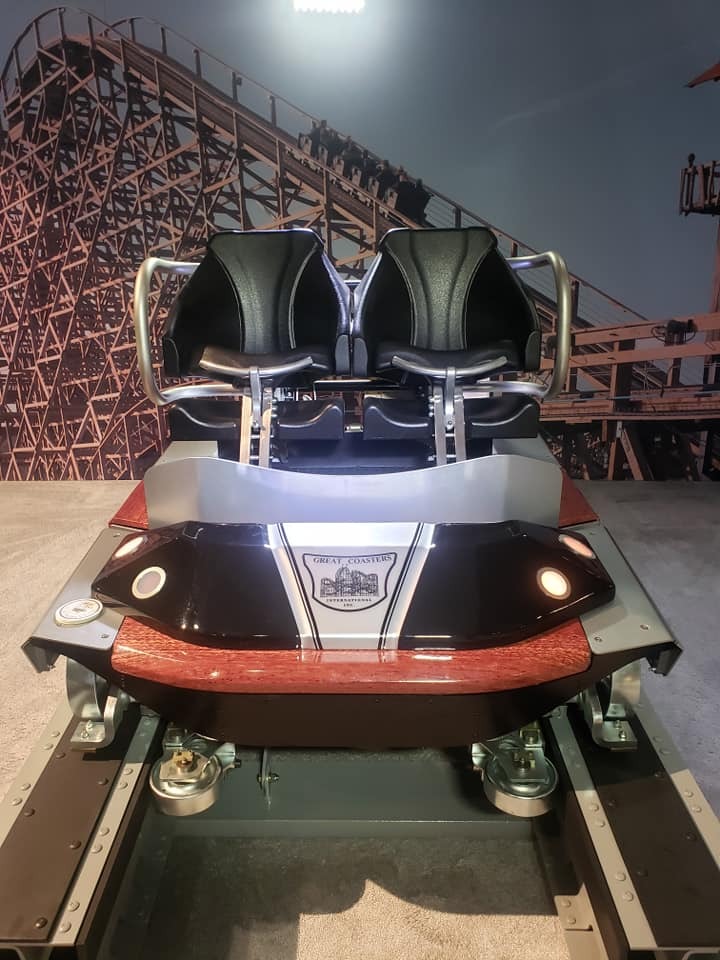 Thursday's edition fo the trade show was filled with mostly smiling faces and optimistic attitudes.  Foot traffic was again light but the almost unanimous consensus of the vendors was that people were here to buy and buy they did.  The outlook ranged from the show being one of the best ever to a solid run, depending upon the vendor and segment of the business.  In general, it seems that the ride sellers and high ticket items were doing brisk business while suppliers for parts and other ancillary items were seeing a more average year.   Electronic ticket and credential access companies were on display in full force and from systems that  handle local FECs to those for major parks and events, the electronic ticketing segment seems to be a hot ticket for the show again this year.

Some vendors estimated the show had only about 30% of the normal foreign attendees, but that number is a strong one considering foreign travel, with restrictions, was just approved last week.  Attendees had to scramble to get flights and make hotel arrangements in order to get to the show.

Peter Theunisz of Holland's KMG made the trip at the last minute and was rewarded with some contract signings.  “It was a very good show for us”, said Theunusz, adding “It was among out best ever.”.

KMG will have a steady list of deliveries  in 2021.  Keith Campanello of Campy's Amusements will be taking delivery of a Freak Out this year in June..  Powers and Thomas Shows will also be getting a Freak Out in July.  Drew Expositions will be getting a need Speed ride next month and a new X-Drive in August of 2022. 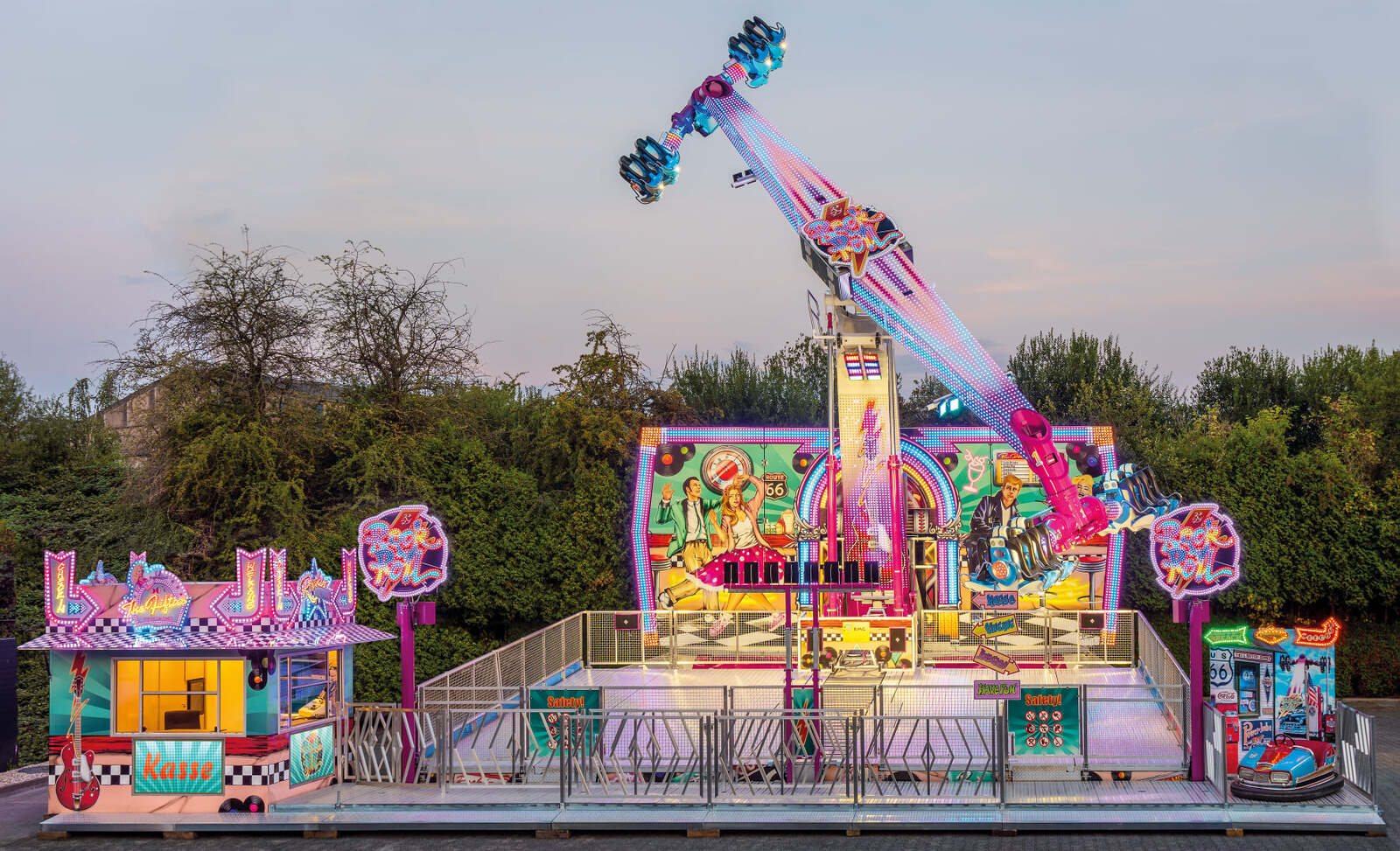 As of this writing, he had another deal pending that he was hoping to have finalized by the end of the show on Friday.

Theunisz, who also runs the website, Used Ride Europe, is setting up a whole new marketplace; Rides Bay.  The site will be a place for users to buy, sell and trade items and services that cover every aspect of the amusement business.

The platform will be set up so that users can post an ad completely free.  There will be upgrade charges for premium placement and ad boosting as is common with similar platforms.  There are also links available on the page to the item and a description.

“This website is designed to cover the business throughout the world”, said Theunisz.  “Everyone can upload their ads completely free”, he added.

Theunisz is hoping to get strong traffic for the site through the availability of free ads and he hopes to sell advertising to vendors and suppliers as traffic increases.  Ads for used rides Europe will now also appear on Rides Bay as a bonus to clients.

Theunisz, who has international experience with contracting, translations and sales, is hoping he will be able to provide many of his services to prospective buyers that need assistance. 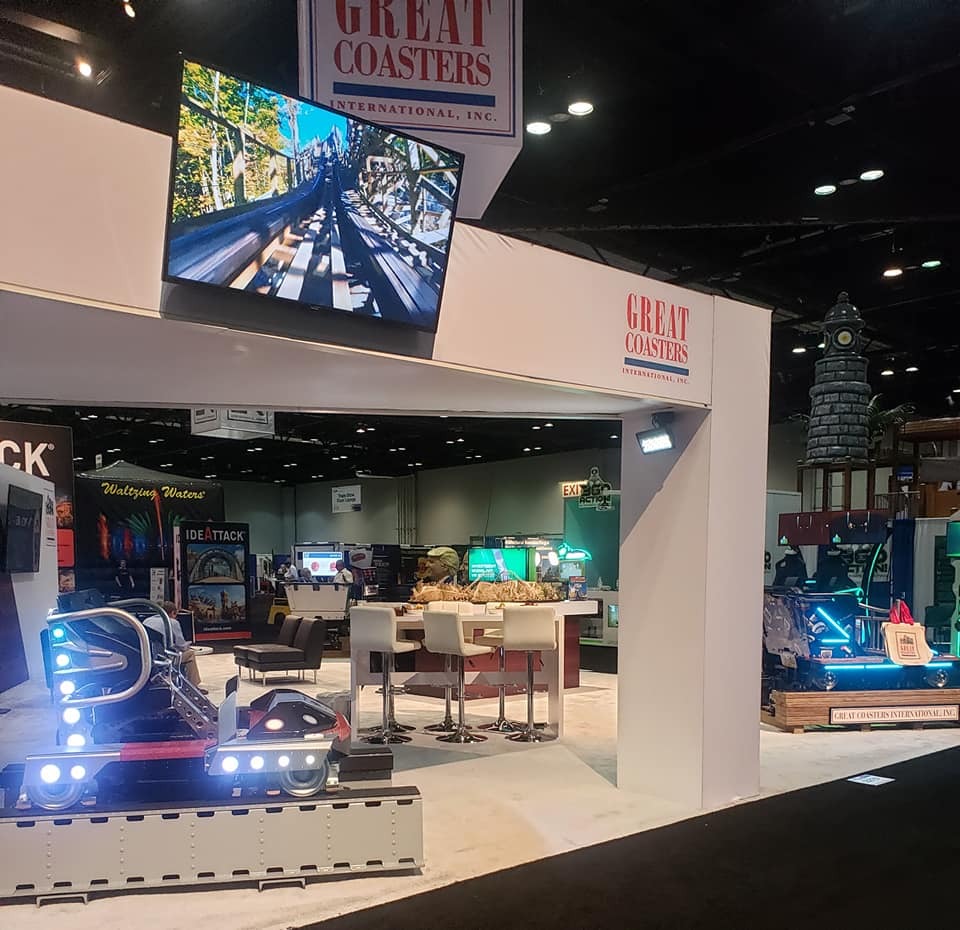 Clair Hain, Jr, President of Great Coasters International, called the show this year “Amazing”.  He observed people coming to the show were ready to purchase.  The success started even prior to opening.  “We got four leads while we were setting up the booth”, said Hain.  But the  uptick in interest started even prior to the show in Orlando.  GCI attended the IAAPA Expo in Europe in Barcelona and the SEA show in Saudi Arabia, and both shows were great for the company according to Hain.  “There was not a lot of traffic but the people there were buyers”, he added.

Hain then hosted his annual party at Fun Spot Orlando on Wednesday night, where he received at least three additional leads. “It has just  been non-stop”, said Hain.

Great Coasters International is a leading wood coaster manufacturing and design company but with the introduction of their new weld-free Titan Track, they have brought their company to the next level; true hybrid coasters of wood and steel.  The new track is fully capable of inversions, being used in a launch application, and for traveling high stress elements not possible with wood.

Fun Spot is the site of White Lightning Coaster, the first installation of the Titan Track in August of 2020.  The park closed the attraction so the Titan Track could be installed on the out and back coaster return section. GCI installed 50' of weld free steel track making this a true hybrid rollercoaster. While in the past, wooden coasters would receive a steel re-tracking process, GCI allows for a wooden coaster to only be re-tracked in sections that require a smoother ride.

The Titan Track can be used for inverting, launching, and full or partial ride re-tracking.

GCI makes not only coasters and track but also produces trains for wood coasters.  The Millennium Flyer articulating coaster trains can negotiate highly twisted track configurations.  The Mini-llennium Flyer is designed to provide a more secure, more comfortable, and more accessible ride for both adults and children on junior wooden roller coasters.

A new innovation for GCI is their all-new Infinity Flyer trains.  The class 5 modern age train is capable of taking on the most extreme coaster elements, including the ability to go upside down.  The train uses a bar that rests in the lap of the rider instead of the more typical over the shoulder restraint. The placement of the lap bar gives the rider a more thrilling feel when experiencing  extreme coaster elements.

GCI's most recent project is the 2020 installation of the Texas Stingray roller coaster at Sea World Texas.  The coaster is 96' tall, 3,379 feet long and reaches speeds of 55 miles per hour, making it the tallest fastest and longest wooden coaster in Texas. 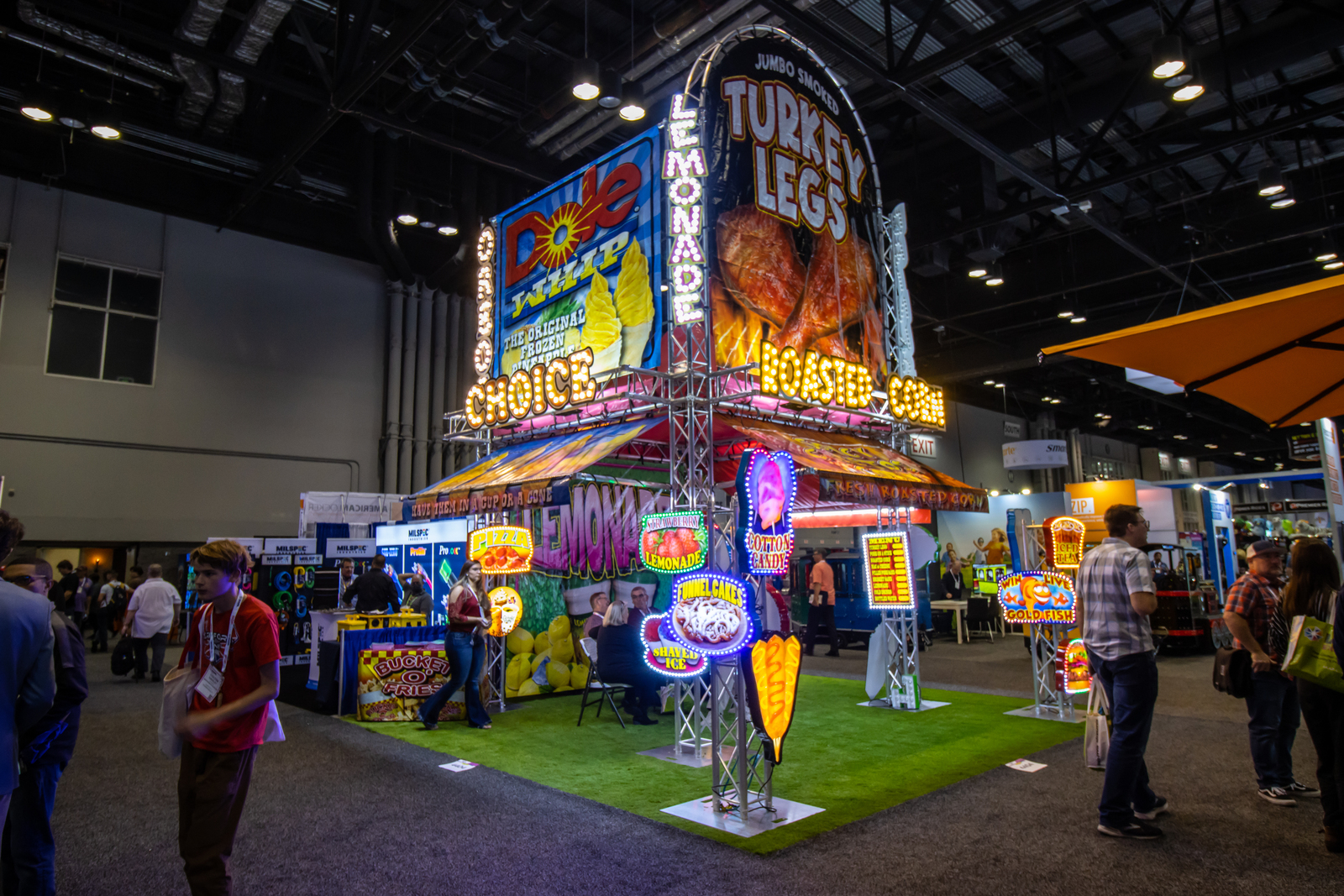 Rocken Graphics had an impressive display at IAAPA 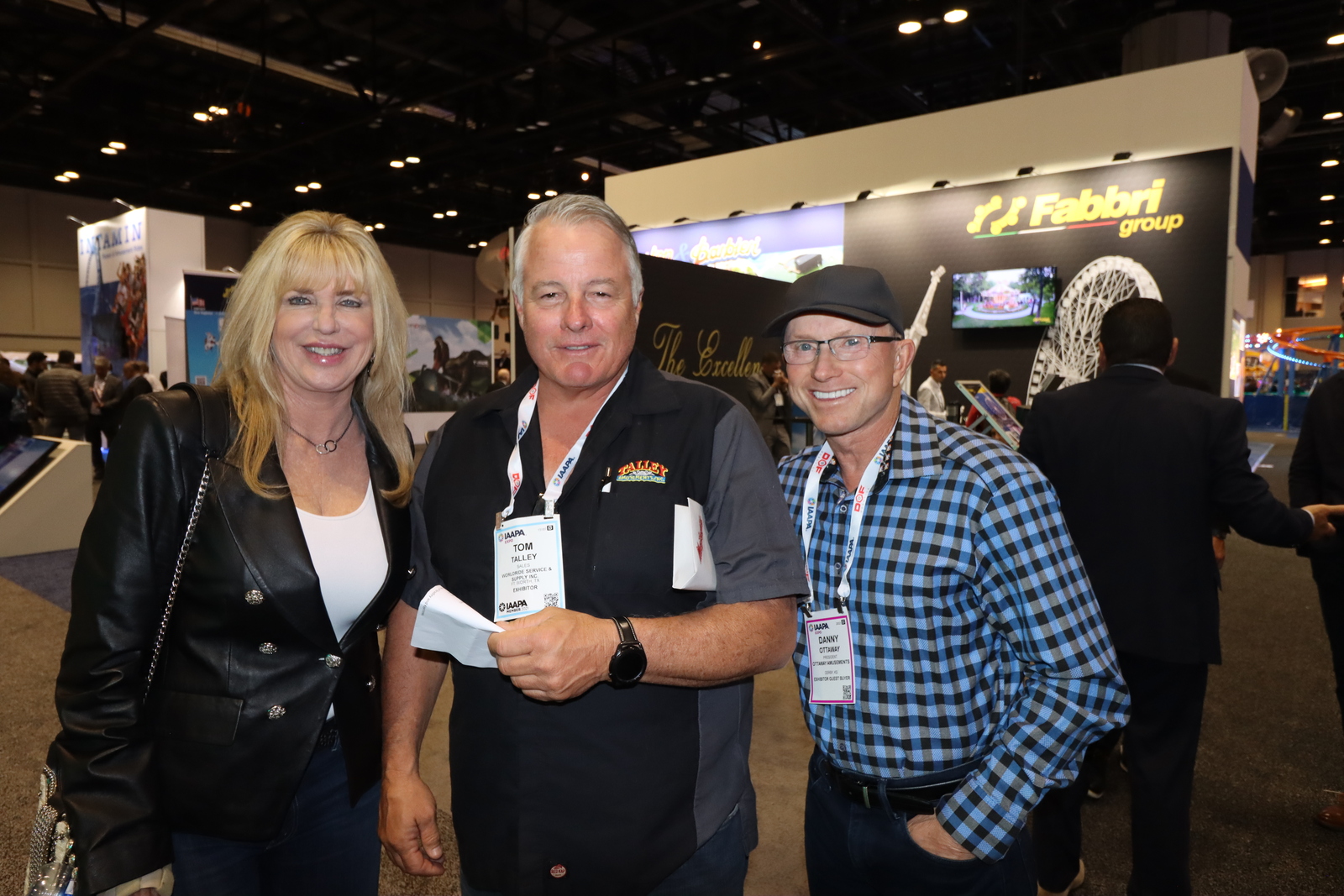 Mary & Tom Talley of Talley Amusements and Danny Ottaway were among the show owners in attendance at IAAPA.