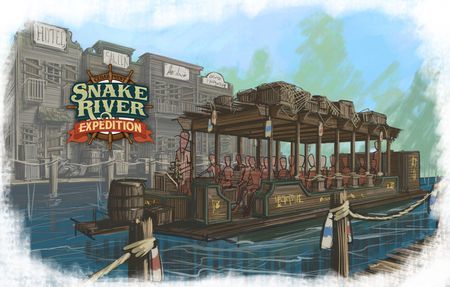 Cedar Point amusement park is offering a nostalgic nod to the past with a cutting edge new riverboat ride. The past favorite was the park’s Western Cruise and Paddlewheel Excursions boat rides. Today’s iteration, Snake River Expedition, puts park guests on riverboats “scientifically designed for exploration and adventure, traveling along the Snake River surrounding Forbidden Frontier on Adventure Island,” as the park describes the ride.

Riders will have a mission, a secret one led by a member of Trapper Dan’s crew to smuggle valuable treasure to safer waters. Riders will interact with both animatronic figures and live actors along the immersive ride.

Colleen Brady, Cedar Point's director of park operations relates that “We have really cool boats that were built specifically for Cedar Point…We got a little bit of history, a little bit of new.” Brady adds that “The best thing about these boats is that everybody can ride them.”

Addressing the immersive aspect of the ride, Lisa Jones, the park's show director, says park guests will also be directly involved in the action, and the experience will “start before riders get on and will continue throughout the ride. There's different characters. There might be smugglers, you never know. As you're traveling through this expedition, they'll interact with you. It's pretty exciting.”

“We wanted a ride that complimented our history and engaged the whole family together with Cedar Point,” he asserts, adding that also in honor of the park's 150th year, the park will be giving away 150 admission tickets for life. Starting in February, park-goers can register to win one of the tickets, which also covers parking. Cedar Point will select those winners throughout the year, and there will be a total of four Tickets of a Lifetime per winner: each winner will be able to select three family members or friends to also receive free admission to the park for the rest of their lives.

“The 150th anniversary is about people, it's about our guests,” McClure points out. “We wouldn't have been here 150 years without them.”

And there’s more to celebrate: Cedar Point has also announced a new nighttime celebration along the Main Midway, including new food items, new merchandise and souvenirs and a revamped Town Hall with a look at Cedar Point’s history.

The Celebrate 150 Spectacular includes over 100 performers on a dozen illuminated floats for a multi-sensory night-time parade. It will take place nightly from June 12 through August 16, traversing down the Main Midway and concluding with a street party at Celebration Plaza.

The dazzling floats offer a tribute to the iconic turning points, innovations and celebrations over the course of the park’s history. The costumed characters will interact along the parade route, and will be clad in a variety of attire reflecting the park and its location.

Food hasn’t fallen out of the celebration occasion either, with the park presenting several new sweet treats. At French Quarter Confections, located at the park’s main entrance, there are customizable toppings for the park’s funnel cakes, elephant ears and waffles on a stick, as well as a chocolate fountain. At the Mac Shack, visitor-created dishes also hold sway. Guests can create the ultimate mac and cheese bow tossing fresh macaroni noodles into a massive cheese block as the noodles melt the cheese. And at The C. P. Juice Co., park goers enjoy an iconic fruit-shaped juice bottle making a nostalgic return for the slushy-like beverage in a bevy of fruit flavor choices. Lastly, a dining passport called Taste of The Point allows guests to dine at 15 of the park’s food locations to sample both new and old cuisine.

Finally, for 2020 The Corral is offering new upgrades to its well-known treats, including gourmet pizza, mozzarella cheese on a stick, and hand-breaded chicken.

Once fed, park guests can also explore the history of the park, with two new history tours guiding them through major park moments and changes. Self-guided tours lead guests to these locations. There will also be Segway tours focusing on the park’s famous beach and boardwalk, lighthouse and other areas along the perimeter of the park.

Pin and button collectors can rejoice at the Cedar Point Button Trading Post where hundreds of designs will be available for purchase at the Button Shop, housed in the former Hat Rack. Each day, visitors will be encouraged to trade buttons with each other or with select park associates. Limited edition buttons not available for purchase will be placed into circulation, and all guests can customize and receive a special “first year” button free of charge.

And that’s still not all: Cedar Point’s 150th also brings the Cedar Point Legacy Walk, the option of a keyhole photo keychain, and The Courtesy Corps, park information agents available to interact with visitors on raised platforms that are positioned throughout the park.

The celebration as well as the creation of the new Snake River Expedition are well timed: earlier this year, Cedar Fair rejected Six Flags’ $4 billion cash-and-stock offer for a merger of the two U.S.-based theme park giants.