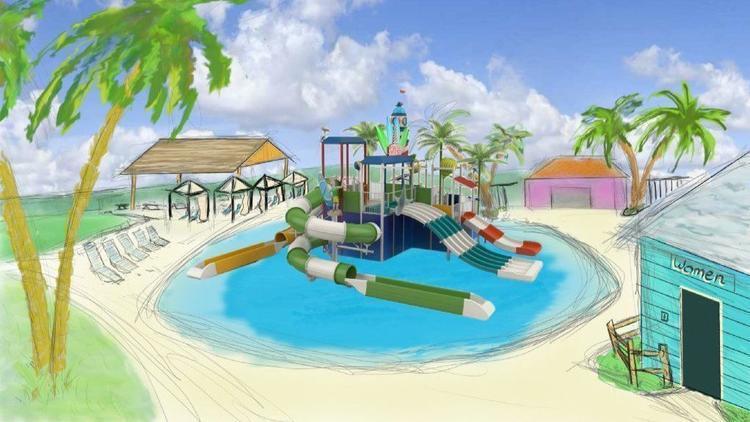 Santa’s Village in East Dundee, Illinois will be opening a new water attraction for the summer season, in honor of its 60th anniversary. The theme park was originally built by Glenn Holland, who built two other Santa’s Villages, both in California. The Illinois outpost was intended to be a flagship, and with the addition of the water attraction, Santa might just give his biggest ho-ho-ho yet.

Santa Springs will have as its centerpiece a 10,000-square-foot, 8-inch-deep wading pool. The pool will include an interactive, two-story water play structure, one that will include two large-scale tipping buckets, and six water slides. One of those slides will be 50-feet in length and a four-lane kiddie racer slide. There will be plenty of other water toys, too.

Along with the massive wading pool, Santa’s Village will be adding a private picnic grove, rentable for events and parties, with a 3000-square-foot pavilion and private entrance. It will be designed to hold over a 1,000 guests, and will also include a volleyball court.

According to Jason Sierpien, president of Santa's Village Azoosment Park, these projects have been in the works for a long time. And while a large wading pool might seem a little chilly for the North Pole, it’s just right for hot summer days in the greater Elgin area. Sierpien says that “Guests had been asking for it.”

Parents will have their own present from Santa: while the kids cavort in the water area, they can enjoy loungers or private cabanas; a large bathhouse will allow kids and parents alike to change and dry off, before visiting other attractions in the park. Santa Springs will be the largest expansion the park has experienced, Sierpien attests, although the park has added roller coasters, including the impressive Super Cyclone, kiddie rides such as a mini-boat ride, games, food, and some 200 animals, from deer to tortoises, over the years.

Construction on the water feature is scheduled for this month, and Sierpien says that it is the first step in what is planned to be a series of developments bringing new attractions to the popular park. Both the picnic pavilion and Santa Springs will be open this summer; no additional charge will be added to the park admission fee to use it. Single day tickets range from $22.99 to $24.99 depending on the day of the week; season passes are $79.99.

The park opened in 1959, closing in 2006; it was renovated and reopened in 2011 with new ownership. Animal attractions are a part of the mix of offerings here, along with thrill rides and plenty of rides for little ones.