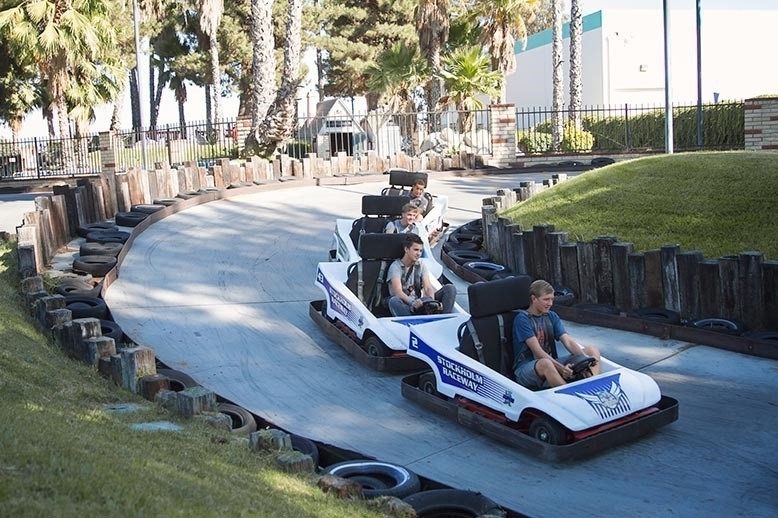 With the recent closure of the Scandia Family Fun Park in Ontario, Calif., the Victorville, Calif. location of the amusement company gained attractions.

Scandia currently has two operating theme parks, Victorville, and Sacramento. The Victorville location has received arcade games and rides from the closed Ontario location. Among them are Thor’s Chariot, and the 140-foot Denmark Drop.

The Ontario location has been sold to the Chicago-based Bridge Development Partners and is constructing industrial buildings on the approximately 8-acre site.

Last year, the Victorville location received a three-lane super slide acquired from the former Neverland Ranch; four years ago, the park added the Crow’s Nest as an attraction.

The Ontario Scandia was open for almost 27 years, and featured 20 rides, an arcade, batting cages, mini golf, restaurants, a picnic area, and a 200-seat pavilion. Along with the rides destined for Victorville, several were listed as for-sale on the Rides4U.com website, which offers amusement rides, equipment, and accessories.

A listed ride package included 11 rides from the former Ontario Scandia, including the Big Coaster, Fun Slide, and Rio Grande Train. The mini-golf was disassembled and given in pieces to employees.

The park employed more than 2,500 people over the years, according to Scott Larson, president of Scandia Recreation Centers. “We’ve had school groups, church groups, company picnics,” he said. “We really have had a wonderful time, and that’s what I’d like to focus on.”

The decision to close the Ontario Scandia was in part due to handling a series of lawsuits; all suits filed in the past 10 years have been settled, vacated or otherwise dismissed; however, the small personal injury cases continued to accumulate. So, when the park property received a good financial offer, they decided to close the park.

Each of the Scandia locations are or have been located close to a major freeway, which makes them visible to families traveling in the area. They all contain mini golf, batting cages and the Baltic Sea Bumper Boats, as well as the Stockholm Raceway for go-karts. Only Ontario held a full amusement park, which makes the loss to the San Bernadino area more acute.

Both Sacramento and Victorville offer the Scandia Screamer, a 168-foot thrill ride that induced loud enough screams that the Sacramento location, after neighborhood noise complaints, implemented “no shrieking” signage.

Ironically for neighbors, but ultimately good for the park, curiosity seekers, alerted to the controversy, came in droves to experience the ride. Guests who didn’t pay attention to the signage – implemented in 2007 – would be taken off the ride or from the front of the line, and placed at the back of the line to try again. The ride accelerates to 65 mph, with a spinning arm operating at just over 3G force.

In Victorville, the towering Neverland Ranch slide is a large draw for the park, according to the park’s general manager Hal Bradley. It’s taller than the building it is placed next to on the property. It was sold by the ranch to Helm and Sons Amusements originally; David Helm Sr. confirmed the sale of the attraction to Scandia. Helm acquired the ride along with others from the former ranch in 2008.

Along with the slide, the current attractions at the Victorville Scandia include: Crow’s Nest, Baltic Sea Bumper Boats – an alternative to standard bumper cars, Stockholm Raceway, Passenger Raceway, Sky Screamer, Jr. VIP Golf, and VIP golf. Ride height requirements vary from 39” to 44”. There is also an extensive video arcade.

The experience runs from 8 to 11 p.m. every night during the Halloween season. It’s a 27-year tradition that originally started in Southern California at a Scandia Family Fun Center. The Sacramento Scandia was built and opened in 2013, and provides hair-raising chills not designed for small children. It’s considered extremely scary; so scary that there are several exits where customers can depart without completing the haunted house. The park estimates 600-800 guests do indeed opt to “wuss out” annually.

With over 39 years in business, Scandia’s amusement parks began in 1977. The Scandia company was founded by 3 Scandinavian families – the Madsens, Jensens and Larsons, with a goal of raising money to support philanthropic missions and causes as well as offer family fun. Well-maintained grounds and golf courses and an international theme are mainstays of the parks, in which the golf courses feature obstacles that represent worldwide architectural destinations. In the middle of the parks stands a Scandinavian castle replica.

Children’s birthday parties catered through the amusement park snack bar are one of the hallmarks of the park.

The Sacramento location was the first of the parks to open, and is located just off I-80.

Along with its California locations, at one time the Scandia family of parks included a Las Vegas outpost as well. It closed in 2008. And now, Ontario has joined that location as something from the past.

“It’s been fun making memories with them for almost three decades,” Larsen attests.