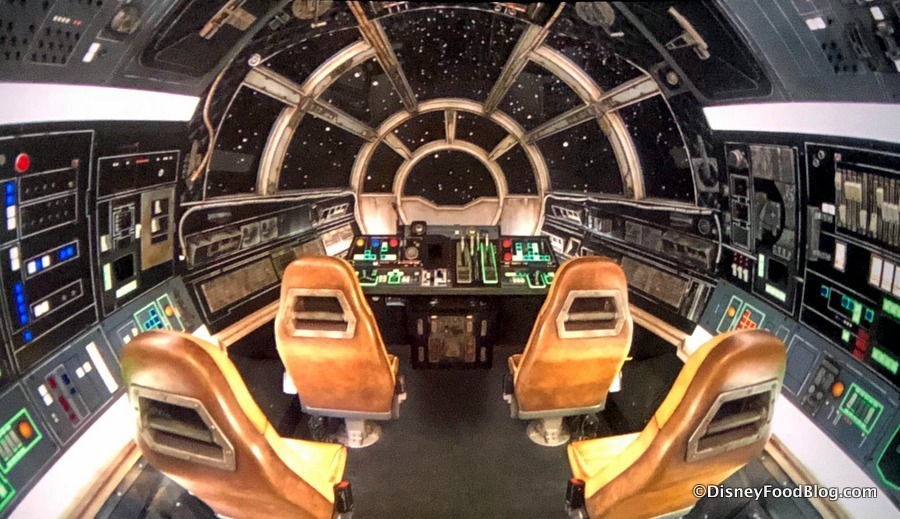 While Disneyland in Anaheim, Calif. was busy accepting accolades for Millennium Falcon: Smuggler's Run as the Best New Family Attraction of 2019, its immersive twin experience in Florida opened August 29th. The advanced technology ride allows guests to play a role on the ride as pilot, gunner, or engineer, in effect ensuring that the “flight crew” will have a different experience each time they ride.

The Thursday opening of Star Wars Land and Smuggler's Run at Disney World caused a line of guests that began readying for boarding as early as 2 to 4 a.m.

By 7 a.m., Galaxy's Edge reached capacity and was closed, while other want-to-be riders joined a virtual queue through Disney's mobile app. There was a 300-minute line for Smugglers Run, which is the only ride currently available in the land. Lines for Blue Milk – a signature snack product - started at 40 minutes and accelerated almost as fast as the speed of a Star Wars smuggling ship. Even at that hour, Oga's Cantina and its variety of alcohol-based beverages has a long wait for the primarily standing-room only bar.

Like the experience at Disneyland, the buildings and marketplace area of the new Star Wars land look cinematically realistic, including signage written in Aurebesh, the language of the Star Wars films. For guests who need a translation, the Disney Play app will do the trick.

Disney employees are costumed and in character throughout the land of Batuu. The idea is to have staff members who fully inhabit these roles rather than just working at Disney World, to make the experience of a visit more involving for guests – especially considering they have only one ride to experience, the experiential visit to Batuu possibly depends upon this type of interaction. At Disneyland, character meet and greet opportunities are scheduled; however at Disney World, characters like Rey and Chewbacca, at least during the opening day, were easy to spot simply walking around Batuu.

It may be fortunate that the character experience is easy to come by, because most of the other attractions beyond the Smuggler's Run ride are not. A custom-built  lightsaber, for example, will cost park-goers $200.

The Play Disney app is also free, and park visitors attest that it adds to the experience, especially for true Star Wars fans.

The interactivity continues with the app's use of puzzles like activating a droid. On-going use of the app even offers activities that help define a user's “allegiance” - to the First Order, the Resistance, or status as a smuggler, perhaps.
As at Disneyland, the queue for Millennium Falcon: Smugglers Run is almost as dramatic as the ride itself. The spaceport where Han Solo's spaceship is parked provides the view from the line; riders will meet an animatronic Hondo Ohnaka whose storyline is that he's “borrowed” the Falcon from Chewbacca to transport his cargo. Once inside the ship and ready to ride, each passenger is assigned one of three jobs; arguably, the two pilots get the best ride experience. As at Disneyland, the controls in the pilot seat simulate the feel of piloting a ship; the engineer has buttons to push.
Looking ahead to December, when Disney World's second Batuu-based ride will open, Rise of the Resistance, the detailed creation of the ride which was open as a sneak preview to media, is a stand out. According to Scott Trowbridge of Disney Imagineering, it's “the most ambitious attraction Disney has ever built.”

For a storyline, riders will find themselves caught in a battle between the First Order and the Resistance. Two full size AT-AT walkers are involved.

Trackless ride vehicles seat eight and fit into a larger vehicle to make its escape from enemy forces. But not quite: when ride doors open, guests will find themselves confronted by uniformed First Order officers capturing them, followed by a squadron of more than 40 storm troopers behind them.

Riders then emerge onto a vast bridge of a Star Destroyer that features a polygon-shaped porthole with a view in the furthest reaches of space. From that point, a chase will ensue, with riders attempting escape. A spaceship makes a straight freefall drop before it zooms off to a safe, nearby planet, making the ride a solid combination of immersive experience and thrill ride.

After fighting their way out of a First Order trap, guests may well be ready to seek sustenance, and so far, the Milk Stand's offering of blue and green milk is a hit, as is a smoothie made with non-dairy milk that has a fruit-like flavor. At Disneyland, that's the entire treat; at Disney World, guests may opt to add a shot of rum or tequila for an additional fee.

In Oga's Cantina, the Star Wars-themed bar, it's time for a reservation or waiting list with a text message telling riders when to return. Primarily standing room only with just a few seats, the bar has a two-drink max, and just as at Disneyland, costumed Storm Trooper characters will let visitors know when they have outstayed their welcome.
Longtime park goers will enjoy DJ R-3X, nicknamed REX, the droid from the original Star Tours. Inventive drinks include the Jedi Mind Trick, the Outer Rim, and the Yub Nub, a mai tai-like drink that can be obtained in a collectible and pricey souvenir Endor tiki mug.

A drink of some kind may be necessary to spend even more to add to the Batuu experience. At Savi's Workshop, available through a reservation service in the Disney app, a builder and up to two guests can make a $200 lightsaber. Only 14 guests are allowed in at one time to create their story and lightsaber.

As much a paid attraction as a shopping experience, guests will choose a story ranging from Peace and Justice (Jedi), Power and Control (Sith), Elemental Nature (raw and inspired by nature), and Protection and Defense (ancient). From there, guests select a “kyber crystal,” to power and illuminate the saber. Each gem can be removed and placed in a holocron cube, also available for sale, but elsewhere, to learn lessons from previous light saber wielders.

Prefer to build your own droid, instead? That takes place at Droid Depot, where the cost is $100 to build a droid that is approximately the size of a coffee maker or blender. The remote controlled creation can respond to prompts as well as interact with larger droids throughout Batuu. Makers can choose from an R2-D2 type model or a BB8. Guests can also purchase items such as hats, clothing, ready-made droids and other souvenirs for sale in the shop, which is designed to simulate the look of a robot factory.

Yet another shopping experience is available to guests at Dok-Ondar's Den of Antiquities, lined with artifacts replicating images from the Star Wars movies. An animatronic Dok-Ondar is shop supervisor; the location sells kyber crystals, lightsabers, and Jedi robes along with lesser souvenirs.