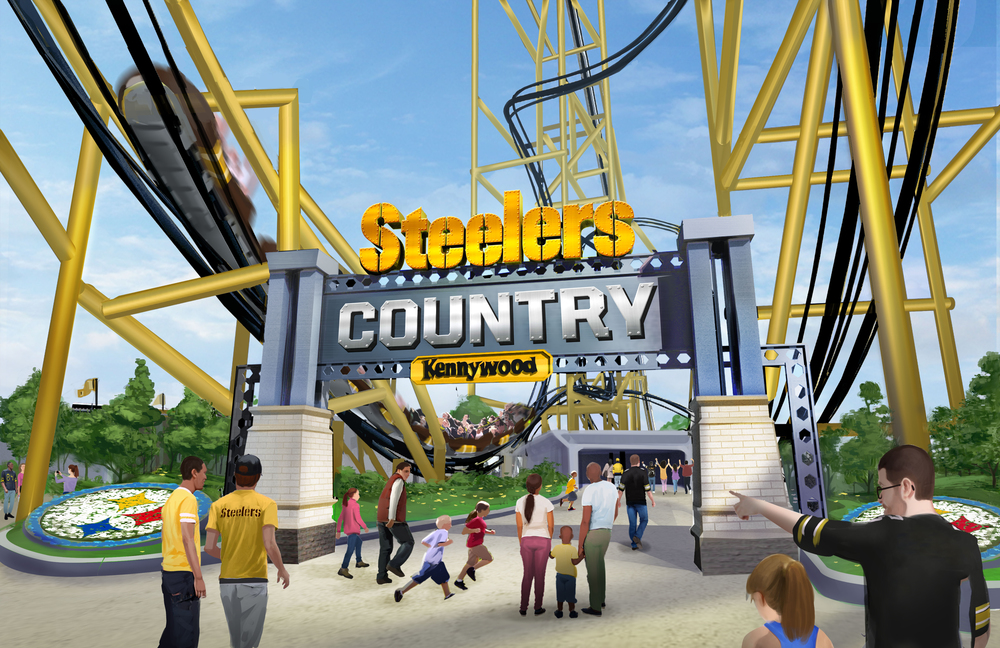 At 220-feet, The Steel Curtain is the tallest roller coaster in Pennsylvania, and also holds a North American record for the most inversions: nine in all. The two-minute ride gives park-goers a sensation of being upside down for most of its duration. The tallest inversion is at 197-feet above Pittsburgh, setting a new world record.

In short, Kennywood’s parent company, Palace Entertainment, has scored a record win. Partnered with S&S Worldwide on the construction of the project, the towering gold and black coaster and its location, Steelers Country, gives the vintage theme park a major staple.

JRA is the firm behind the design of the full Steelers Country land, which is still upcoming, with the new coaster as its centerpiece. The company also worked on creative design for Ferrari World in Abu Dabi.

According to Rick O'Connell, the design director for Steelers Country, while the coaster is a big win for the park, the reason theme parks are not showing more interest in sports-themed attractions is because “Sports can be kind of tricky, especially with individual teams…It could be an immediate turn off for some guests.” He says as an example that Cincinnati Bengals fans could be turned off to the idea of visiting Steelers Country.

But with the coaster a big hit and plans firmly in place for the themed football land around it, he believes the niche is positioned for success. “We think you will start to see more team sports themed attractions pop up, especially regionally.” In general, the prediction is that fans of the sport – whether football or any other game, will draw fans even if their favorite team is not on a theme park’s scoreboard. In short, sports-related attractions are likely to draw fans of a sport overall.

Additionally, park-goers may embrace a whole game-play aesthetic. The design of Steelers Country itself offers a sporting dynamic to guests, including physical challenges that allow guests to improve their own “performance” on return visits.

Primarily, Steelers Country celebrates the heroics of football players, but with a twist that brings fans into the center of the game action. Skill games, themed food locations including a tailgating experience, and of course, sports merchandise offerings, bring fans the sensation of being actually at a stadium. Attendees can join familiar game moments and test their own mettle in practice drills, work on their touchdown dances, check game scores, and watch game highlights on a giant-sized screen.

But no matter how cool the illusion of being a game participant may be, a sports-themed park still needs a major sports-themed attraction, and with Steel Curtain, Kennywood appears to have that part locked.

The Pittsburgh Steelers-themed roller coaster is already a landmark that extends beyond Steelers fans. Opened July, it was named the year’s best new coaster in the annual Golden Ticket Awards announced by Amusement Today magazine.

The ride has a top speed of 75 mph, 4000-feet of track, and of course those nine inversions. The black-and-gold color scheme is sleek and relatable even to non-Steelers fans, plus it doesn’t hurt that it has set three new records: tallest, the most inversions in North America, and the tallest inversion on record, which set a world record.

When the full Steelers Country opens, projected for an unnamed date in 2020, the sporting picture should be complete at Kennywood.

Waiting for game time are the End Zone Cafe & Tailgate Patio, described by the park as an indoor restaurant serving game-related fare. Outside, the Tailgate Patio is designed to simulate the tailgating experience, with visual cues referring to stadium tailgating.

?Also upcoming is The Steelers Experience, a participatory football immersion that features what the park calls “a one-of-a-kind indoor, multi-level training facility that puts you on the field and in the center of the action.” There will be a variety of interactive exhibits for park-goers to enjoy, including the cooperative Terrible Tower and competitive Third and Long to test participants’ game savvy and mettle. Players can track their progress, and compare theirs with others on an an interactive leader board.

?Kennywood’s Steelers Country will also feature a wide arrange of Midway Games geared to both participation and observation. The theme will be challenging games that test the strength and endurance of players.
?Sports theme parks a thing of the future? When all the attractions at Kennywood come into play, it’s more than possible that the theme park industry will take note.