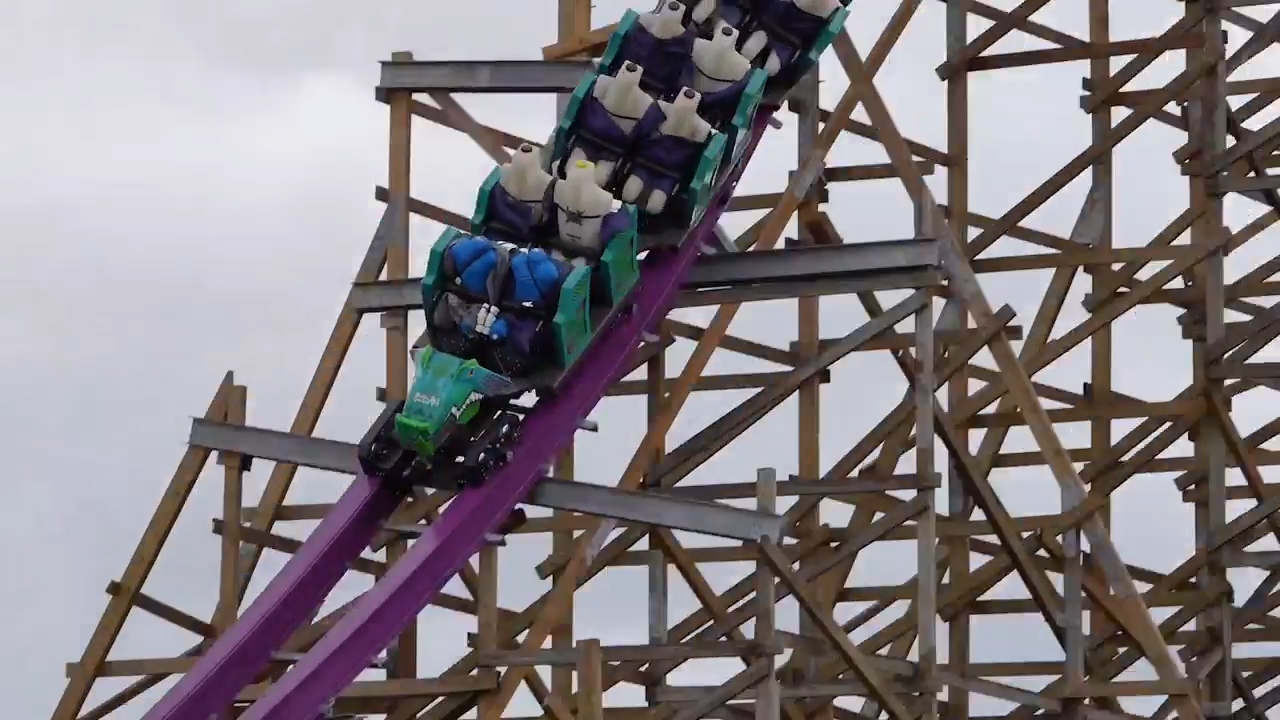 Parks may tear down obsolete rides. They may keep them as nostalgia rides to please regular park guests. And they may rebuild an old attraction with new materials either to preserve and update or completely redo an attraction.
Old rides may look better than ever with rebuilds such as Space Mountain at Disney; but more frequently than not, theme parks large and small are taking the old infrastructure of a ride and completely reimagining it.

At Disney California Adventure, Guardians of the Galaxy Mission: Breakout! was a complete redo of their Twilight Zone-themed thrill ride. Keeping that ride's physical thrills, Guardians of the Galaxy was the reborn theme, creating a ride that also fits into the park's new Avengers Campus. With the redo came the the ability to make seasonal overlays, such as a recent Halloween version of Mission: Breakout!, called Monsters After Dark. Both themes make good use of the original ride's large-scale drop thrill.

Over at Six Flags Over Texas Aquaman Splashdown, a thrill flume ride was replaced with a new attraction also featuring Aquaman, Power Wave. The new ride is a launch coaster with 700 feet of track and a 63-mph speed. It will send riders hurtling into a suspension at a 90-degree angle. The ride was scheduled to open this summer to plunge riders backwards, forwards, and backwards again then into a big, wet, straight-down finale. Assuming the park will be open this summer, it should be an exciting new twist on a beloved favorite character-themed ride.

Many newly reimagined attractions are under the purview of Rocky Mountain Construction, an award-winning company that has become well-known for its reimagined old rides. Using older rides as a base, the company allows parks the capability to create a new ride by modifying existing rides which also saves construction time and cost; and it also allows park guests to enjoy the history of the attraction.

One of the first parks to do so was Six Flags, where seven Rocky Mountain refurbished coasters are located. In 2011, the Texas Giant wooden coaster at Six Flags over Texas, originally built in 1990, was redone at a cost of $10,000,000. The new ride included a steep drop of 79 degrees and many banked turns. Using steel, the new track replaced the wooden coaster's bumpiness with a smooth steel ride.

Based in Idaho and founded by Fred Grubb and Suanne Dedmon 15 years ago, RMC has been a major part of the renaissance of ride rehabilitation. Jake Kilcup, RMC designer says “With the remodels, it really is our goal to stick within the footprint of the ride. We use as much of the foundations as we can.”

Their upcoming Iron Gwazi at Busch Gardens will be the steepest, fastest hybrid roller coaster to date. Scheduled for a 2020 opening, the ride had test runs in early March. The remade ride's classic wood, now with its steel hybrid design, reaches a maximum height of more than 200 feet. It is described on the park's website as featuring “all new thrill elements as well as restored elements of Gwazi,” or in other words a combination of the best of both worlds to please nostalgic fans and bring new thrills. The ride features RMC's I-Box Track technology.

Busch Gardens' director of design and the project manager for Iron Gwazi, Andrew Schaffer, added that “There's a lot of old Gwazi that's still out there.” However, he described it as having a “180-degree difference” from the original. He noted that the station and the ride foundation are taken from the original coaster, as Kilcup suggested. However, “The ride feel is 100% different.” He described the feel as smoother and faster.

?Along with Six Flags parks, other major theme parks are getting into hybridization of coasters: Cedar Point with Steel Vengeance, and Dollywood's Lightening Rod.

It isn't only coasters that have been reimagined, however. Disney's Tomorrowland has reimagined spaces in that area of the Anaheim park for decades; long running attractions suddenly house different rides. Disaster: A Major Motion Picture Ride…Starring You! At Universal Studios became Fast & Furious Supercharged; Back to the Future, also at Universal became The Simpsons. SeaWorld Orlando turned Mission: Bermuda Triangle and its simulator game into Wild Arctic, an attraction that featured actual animals. At the Orlando Magic Kingdom from Disney, Mr. Toad's Wild Ride became the far more benign The Many Adventures of Winnie the Pooh.