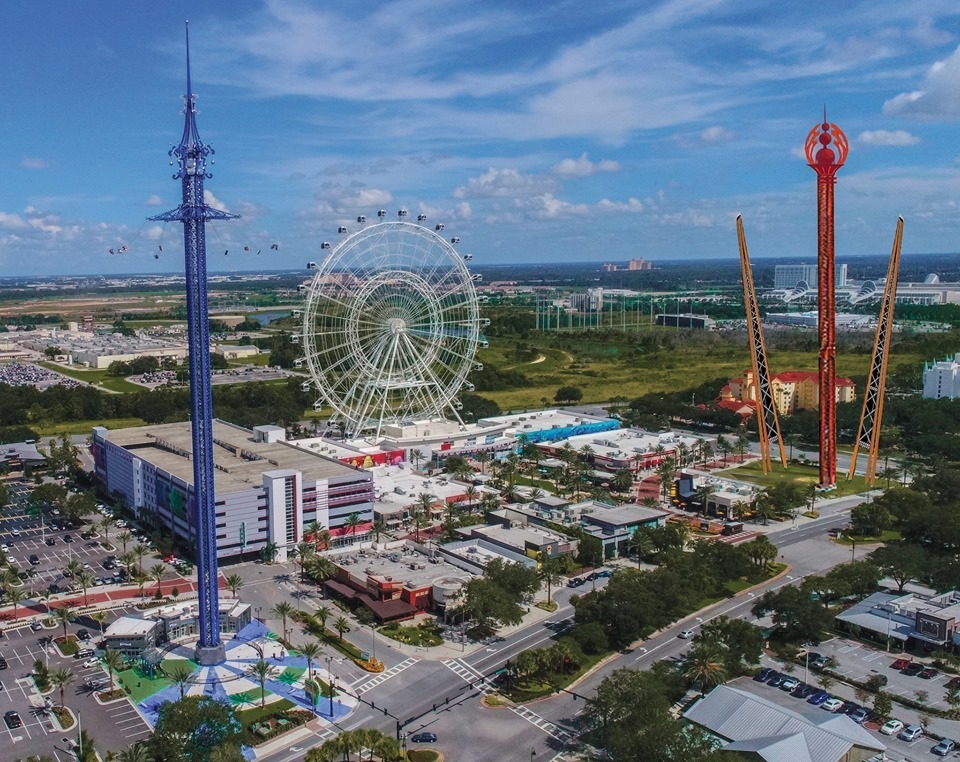 Two new attractions are coming to the Orlando area’s Icon Park, billed as the world’s tallest drop tower and the world’s largest slingshot.

The new record-breaking attractions will be positioned on the southwest side of the park, on either side of the 450-foot-tall StarFlyer swing ride. The ride was shipped to the site from Austria. It has 24 double seats and with no age limit and a minimum height requirement for riders of 44 inches, the 3-4 minutes ride is touted as being safe and exciting for all ages. The manufacturer, Funtime, is also creating the two new attractions. Funtime designs, engineers, manufactures, installs and operates over 130 attractions worldwide. The company’s rides have been present in the U.S. since the Old Town Slingshot was installed in Kissimmee, Fla. in 2001.

Also at Icon Park is the 400-foot tall observation wheel in the center of the park, offering grand views of the Florida landscape from Orlando’s skyline and theme park to views of the Kenney Space Center on Florida’s east coast. The iconic ride features 64,000 sparkling LED lights used to create a variety of changing light shows. And the park is also home to the 7D Dark Ride interactive adventure, a first-person shooter game that includes light, wind, motion, smells, and sound and a 3D video that features zombies, a mad scientist, and more. It is one of four such attractions in the U.S. The Pearl Express Train is a family friendly ride that traverses Icon Park, allowing a view of its attractions, as well as outposts of Madame Tussauds, SeaLife Aquarium, and the encompassing collection of games at Arcade City. Icon Park fills 20 acres, and offers 40 dining options and a variety of retail experiences as well as ride attractions.

The new drop tower is called the Orlando Gyro Drop Tower, and is the taller of the two new rides. It will have a decorative crown, and unlike Six Flags Great America’s similarly towering Zumanjaro in New Jersey, it will not be attached to the side of a roller coaster. While the Orlando Gyro Drop will be tall, it won’t be the highest, as the 160-foot-high Big Shot in Las Vegas is positioned on top of the 921-foot-tall Stratosphere Hotel Tower. It will raise riders 350 feet into the sky for a view of the surrounding area, then drop them back at a phenomenally fast 75 miles per hour.

The ride promises a spectacular view as the seats will rotate and may also tilt forward, as do the seats on Busch Gardens’ Falcon’s Fury. The ride will feature the latest tech in lighting packages.

Unicorp, the development company behind Icon, has put aside past residential project plans to accelerate more tourist-friendly attractions, encouraged by the enormous success of the Starflyer, whose hours have been extended since its opening.

Nearby, even more thrill rides are planned at the Skyplex complex, developed by Joshua Wallack, of Wallack Holdings LLC. The Skyplex entertainment area will also be home to another amusement park behemoth, the Skyscraper, billed as the world’s tallest roller coaster. It’s projected to rise 570 feet and include a number of zero gravity rolls. The physical footprint of the plant was scaled back to leave room for a future hotel on the 14-acre parcel on which it will be built.


There are other projects afoot for Icon Park as well, such as a powered zip line, and a planned $15 million, 15,000-square-foot Blake Shelton-branded, country-themed dining and entertainment venue with the name Ole Red, based on the country singer’s hit song, “Ol’ Red.” There are two other Ole Red locations in the U.S. The venue will be developed with Ryman Hospitality Properties, and will feature unique-to-the-location cocktails and menu items; and be home to live music experiences for 500 guests. Also in the works: Element by Westin Hotel, and a retail building close to the Gyro Drop Tower and Slingshot. The new Westin property will replace a now-closed Irish bar on the property, and offer 165 modern hotel rooms.

Construction on the additions to Icon Park, which its developer has described as a “mini-theme park” has commenced, with phased openings throughout 2020. Ole Red Orlando will be one of the first attractions to open.

The two new tower attractions are scheduled to open in spring of 2020. A record 75 million people visited the Orlando area in 2018, making it the most-visited destination in the U.S. – and with new attractions such as this, that 4.2 percent increase over 2017 visitors to the area seems well poised to continue.