Zamperla Brings on the Vikings at Adventureland 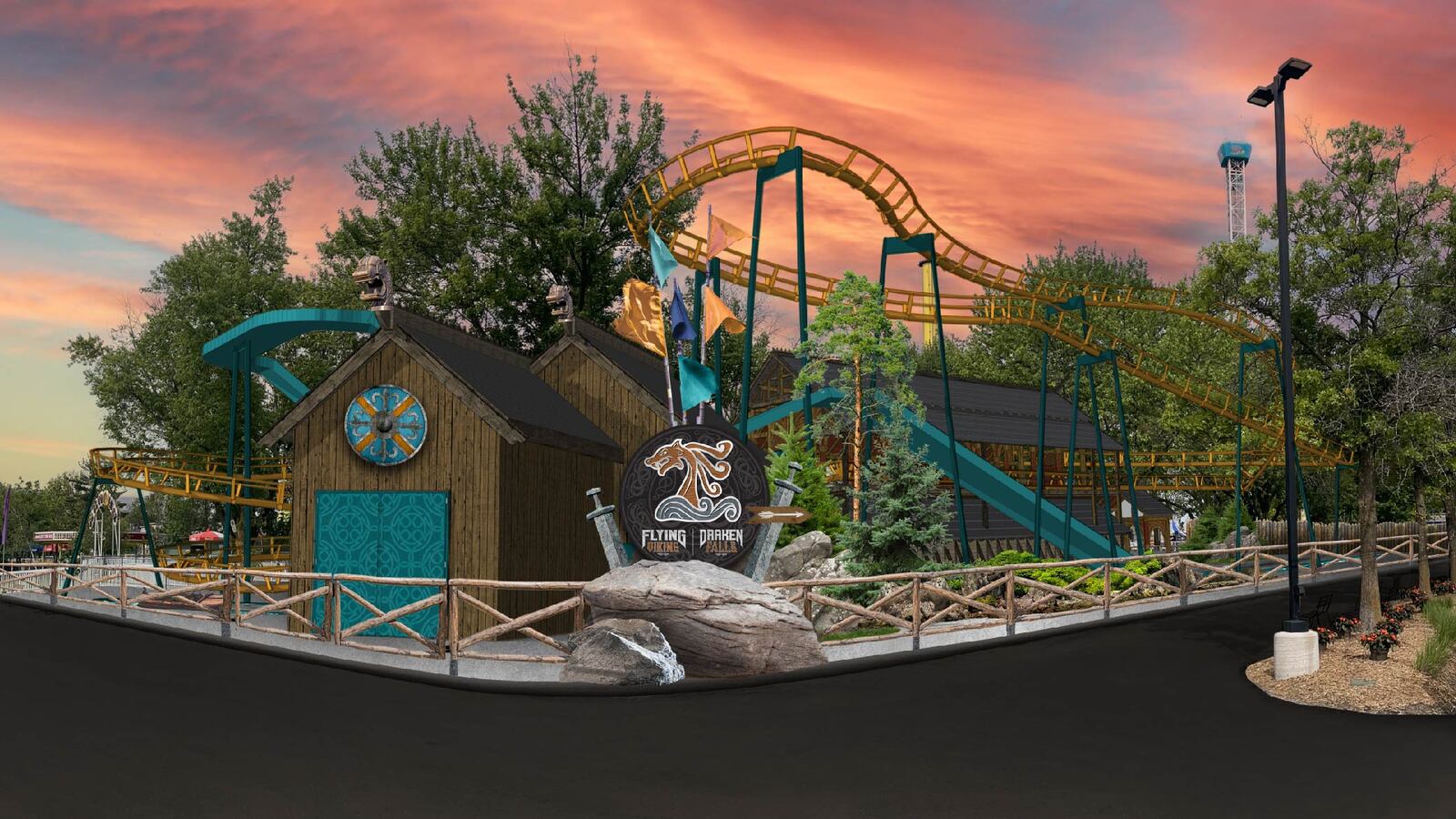 Adventureland is pairing up with Zamperla to add two new Viking-themed rides to the Iowa theme park's new Viking section in 2023.

A family roller coaster, The Flying Viking is designed to be a thrill for kids and parents alike, at a reasonable level of excitement to keep every family member happy. The coaster features a track of 1,312 feet, and speeds of 26 miles per hour. The ride crests at 50 feet.

Also designed for families will be the new Draken Falls flume ride, which guests had requested as an addition to the park according to Bill Lenz, the park's general manager. He suggests that the two rides are “even better” when woven together and combined “add something new and special to our lineup.” He notes that guests requesting a new flume ride will not be disappointed by this attraction, describing it as “bigger and better than anything to be found within hundreds of miles.”

He believes the combination of the new flume with the new coaster will be a big success for the park. The paired attractions were designed originally for Coney Island's Luna Park, Zamperla North American sales exec Micheal Coleman states. He describes the layout of the new Adventureland rides as the same as the Luna Park Installation.

The installation and theming will support the location and create a new experience for every guest enjoying the rides. Coleman asserts that while rides can be themed without being supported by elements that create an immersive experience for visitors, that certainly won't be the case at Adventureland.

“What the Palace Entertainment team is doing between the immersive station and other key hardscape elements, this installation will certainly immerse guests,” Coleman says. 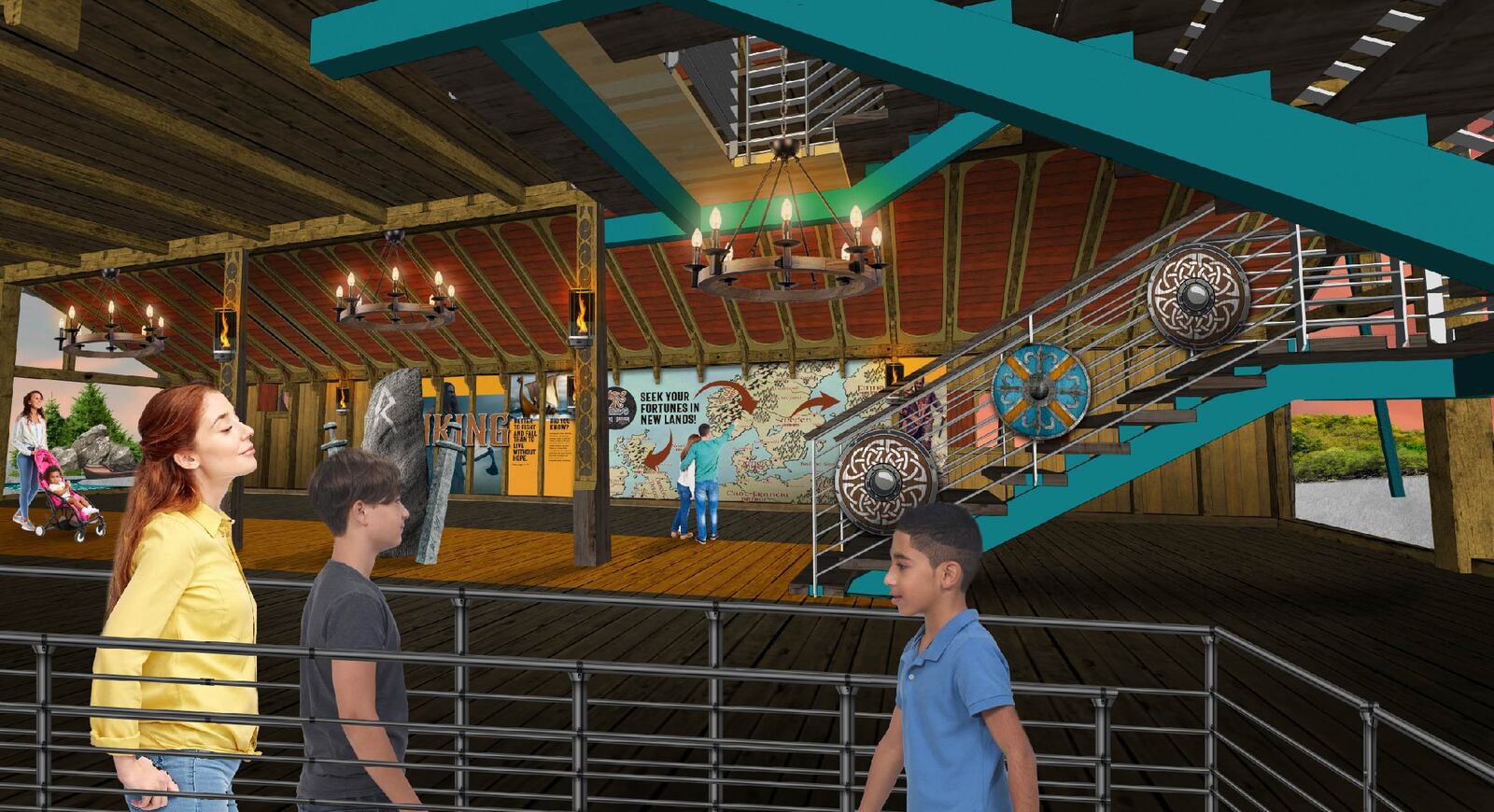 Combined, the new Viking rides will make the 10th and 11th new family attractions Adventureland has added since it was purchased by Palace Entertainment in 2021. They've made good on their promise to continue to add new attractions to the previously family-owned park, which had opened in 1974.

Zamperla's roller coaster sales and marketing director Adam Sandy adds that “Our integrated rides concept is an idea where we take one of our large assets like a coaster or flume and design it with other attractions laid out in the same area.” The concept developed after watching clients such as Cultus Lake Adventure Park install attractions around Zamperla's large coasters, and from visits to multiple clients across the globe, including Mall of America. “They
used smaller footprints to create a different type of density by using vertical space,” he explains.

The Flying Viking Junior Coaster is designed to be an eminently rideable hit for all ages demographically speaking. The riders' height requirement is 36-inches for accompanied passengers.

Draken Falls requires a slightly taller height at 42 inches, but Coleman suggests the intertwined layout of the two rides allows visitors to view the flume fun and have “something to look forward to when they visit the park the following year.” Visitors aged 5 and up should be able to participate.

Coleman points out that the ride's design offers “one of the largest flume splash-downs out there,” making it into what should be a big hit for all ages.

Roller coaster aficionados have flocked to Adventureland in recent years, with a wide range of coasters appearing at the park even before its purchase by Palace Entertainment last year.

John Reilly, Chief Operating Officer of Palace Entertainment said last year that the company specializes in attractions that create experiences to be enjoyed over a lifetime, from childhood to young adulthood to parenting and grandparenting.” The new Viking themed rides certainly fits that intention, as well as supporting Reilly's goal of expanding Adventureland's ride lineup to include 10 new rides in all by the end of the 2023 season.

Sandy adds that “Building more rides in the same footprint allows parks to achieve a different
type of guest experience.” In short, it's a new type of immersive experience for guests between themed storytelling and the surrounding activity created by the combination of both the new Viking rides. “Riders stepping into the Viking area at Adventureland will be amazed as they see two huge rides surrounding them no matter which direction they look.” He describes that both riding and watching the rides in action will provide the ultimate “kinetic experience” for guests.

The Draken Falls flume ride will be an especially welcome addition for guests, as the park retired its previous log fume at the end of the 2015 park season. The flume ride is remembered as a fan favorite at the park, and guests were eager for a new way to “get wet” in the summer season. The eagerly anticipated new Viking themed flume ride will run over 1,200 feet and feature as many as 20 six-passenger boats.

Combining the coaster and flume attraction as a packaged concept makes a lot of sense for Zamperla customers, Sandy says. The combined concept has been popular for the manufacturer which started to conceptualize this type of ride integration after creating one for Ferrari World in Abu Dhabi. That combined attraction opened successfully in 2020.

Sandy relates that Zamperla began working on new park rides for Luna Park, and that was when the company began to consider the idea that the integrated rides seemed like a “perfect fit” for the Coney Island park location.

The integrated rides placed at Adventureland are designed to completely revamp a section of the park and replace older rides. Scheduled for a 2023 opening, groundwork has begun with construction materials transported to the location.

Coleman hopes to accommodate up to 2,000 guests per hour on the rides and believes the success that he anticipates will likely lead to seeing “more of these integrated ride packages pop up at parks around the world.”

For Adventureland itself, the Vikings look poised to conquer new territory. 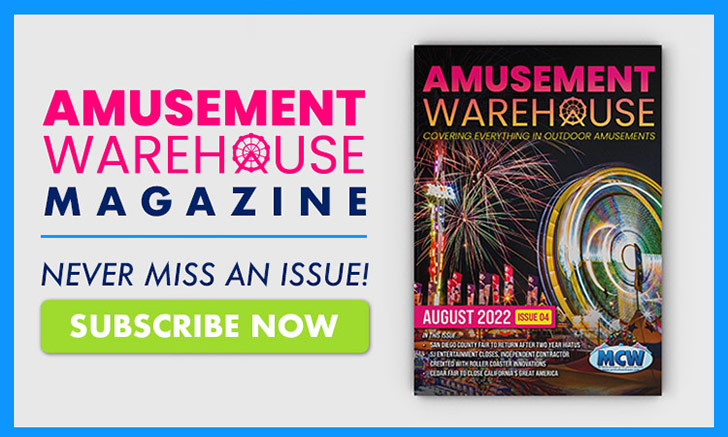